It's been a month since my return fromThailand What time it flies fast to ... Emotions have already taken off, but nevertheless, I will try to describe the transit through Novosibirsk in all colors. It all started with the fact that we finished our group trip to the north of Thailand and I ended up in Bangkok waiting for the appearance cheap flight to Thailand. I wanted to wait for the burning charter, but all of themIt was not and was not, but time was passing. I could not wait too long, as I was waited at home, and the visa was about to end. At that time, the only airline that offered tickets at normal prices was S7, in fact, I bought its air ticket (I recommend it to anyone who buys through Aviasales.ru and Skyscanner.ru). Bangkok - Novosibirsk - Moscow. Such a good route, transfer only 3 hours. What could be the catch? Transit across the street

I was so happy that I bought a ticket that firstbought, and then began to think. And I decided first of all to read how the docking takes place in Novosibirsk in Tolmachevo, well, suddenly, 3 hours is not enough. Now, what kind of tickets are not sold, you can buy, and do not have time to dock, and no one will care. So, it is useful to read on the forums and ask questions. After some time, it became clear (several kind people told everything, even the airport’s photos showed) that one doesn’t need to worry about the time in the transit zone, but not to freeze, as there is actually no such transit zone there, but there are several hundred meters white snow between terminals

Clearly, many will say that in Russiayou come back, and there is winter, like you have to think with your head. So in my understanding, I should think with my head only before the flight and after it, whether it is transit or not. Many in general, before the trip, warm things in the left-luggage office are left in their hometown, and not in transit. So it was too early that the airport in Novosibirsk was made international, they got excited. The transition between the heated terminals had to be built first and then assigned the status. What is interesting, foreigners would think about this?

Tale of how I walked in sandals at -36 ° in Novosibirsk

Thank god that I had a brain not sovery relaxed and still read the forums. Therefore, I immediately ran into Big C to buy clothes and buy presents, I was still going to go there. I was strangled by a toad to buy a jacket, I did not see it cheaper than for 5,000 baht, and why should I have it disposable. I thought of buying myself for the winter right away, since it was time to change already, but the choice of winter clothing in Thailand is mute. But he bought himself a hat for 80 baht, barely found something masculine on the women's stand of hats and scarves. Apparently, only Thai women of fashion wear hats here. There were Columbia hats for 1500 baht in a specialized sports shop, but also, IMHO, a complete bourgeoisie. I also bought 2 pairs of less warm socks for 20 baht, and pants for 400 baht, that's all warming. Of course, I had with myself a few more pairs of socks, two sweatshirts and a very light windbreaker. And this set is quite enough for transit if, of course, you are not a scarlet flower. Ready for transit and return to Russia! 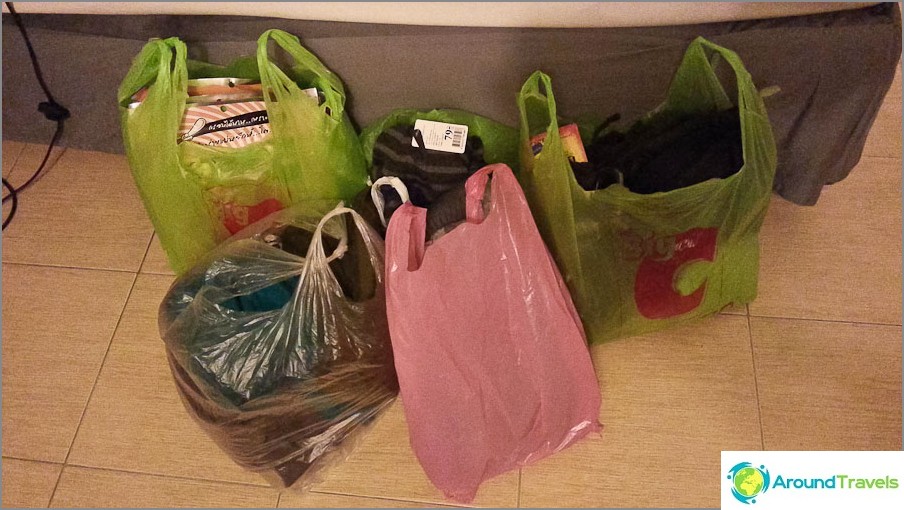 Gifts, too, stocked up

Details of the fact that the S7 flight was delayed by 7hours, I will omit. I got a text message about this in advance and I cooked some of the time at the hotel. Others settled in the hotel at the airport and fed. I also got food, but later. In general, the feeling is that they tried to feed us with food so that we were more silent. In total for the flight I ate 4 or 5 times! Truth and time spent on the legs turned out to be more than a day. It’s good that even then they put us on the second segment in Tolmachevo without any problems (our original one flew away due to the delay). 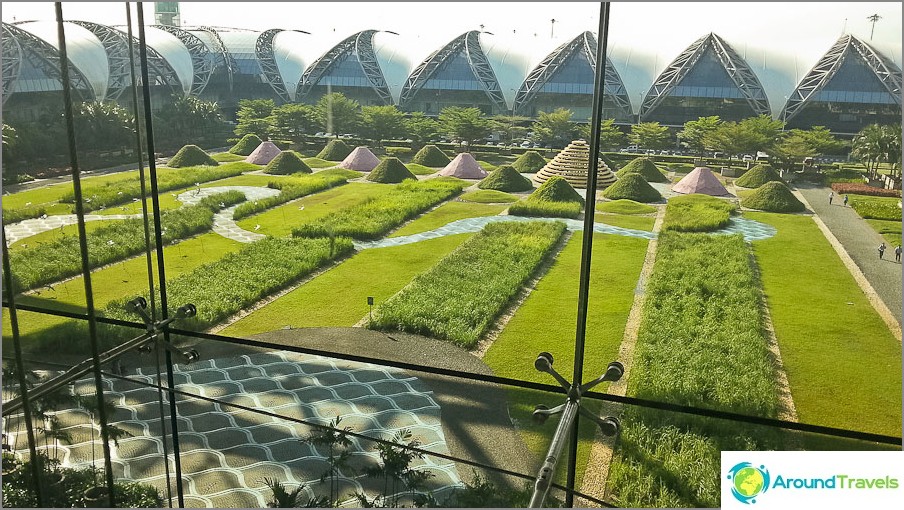 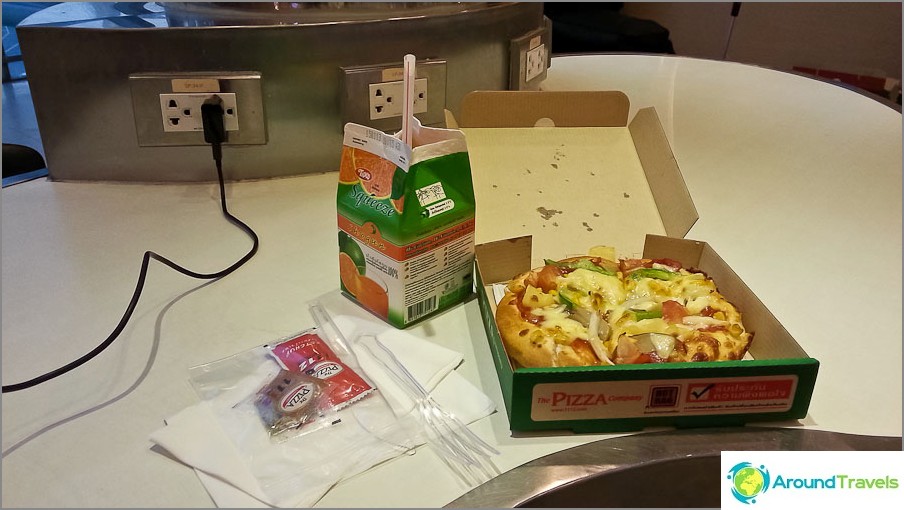 During the flight delay in Bangkok we were fed 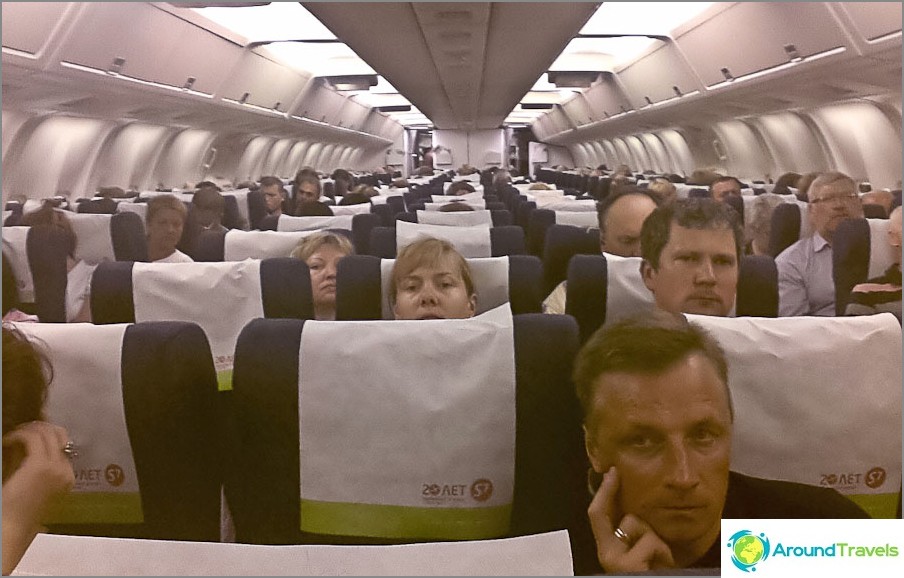 Everyone is so funny flying home. 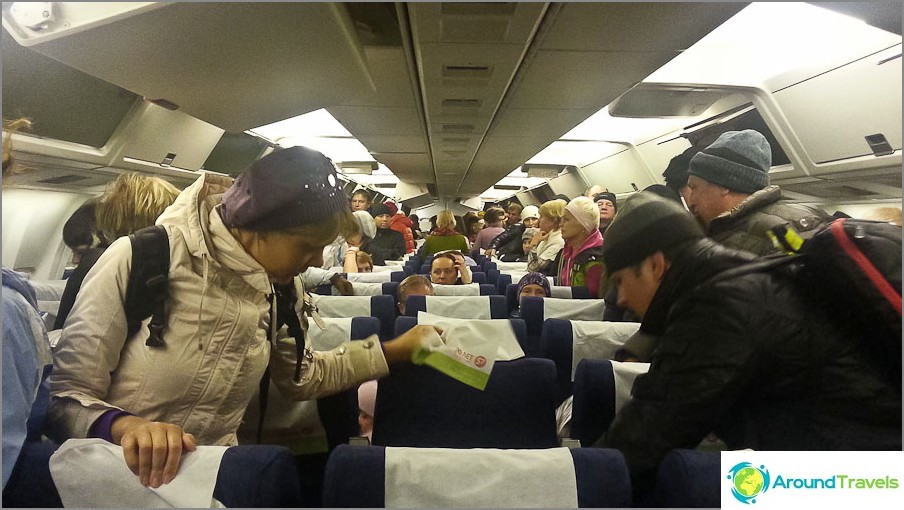 I envy a little, such are all charged before winter 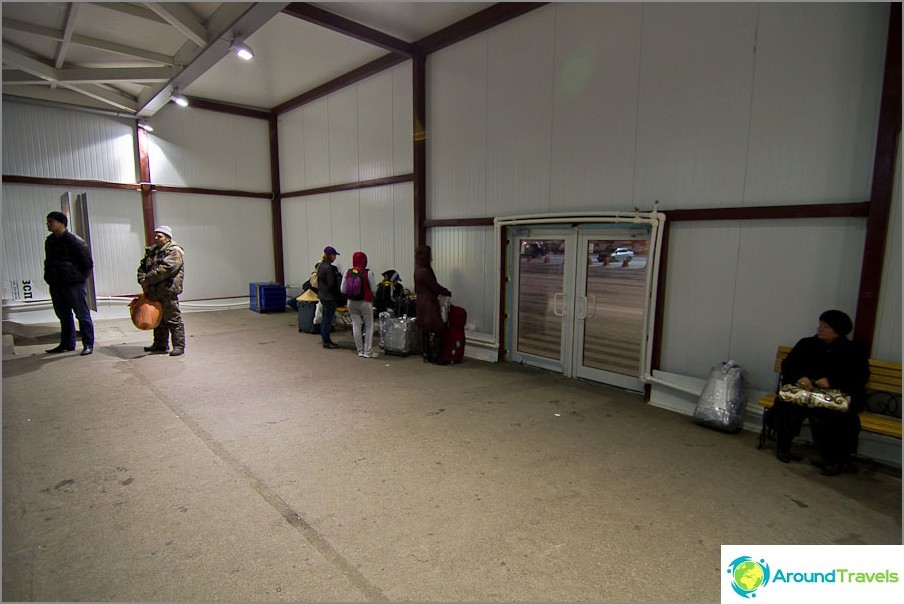 I wrapped myself up as best I could, gathered my courage, tookA 20-pound backpack on my hands (I shook it with a strap and I didn’t want to unpack it with a fool and I didn’t want to unpack the reviews, and started to run to the local terminal as I could. The first seconds - and what, -36 ° like and nothing, quite normal temperature. After 30 seconds - hell, how far I don’t feel my face, my breath caught. I burst through the door like a sinner into earthly paradise after the hellish frying pans. It’s a pity there was no one to take me away from ... 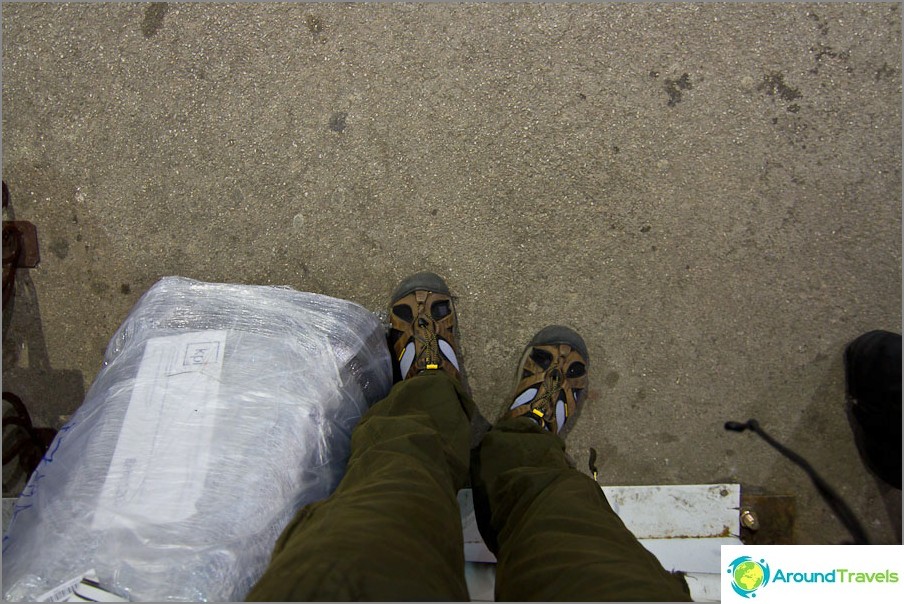 Preparing morally for a rush to another terminal

But the local terminal is quite normal, althoughsmall but warm enough. What impressed me most of all was the announcement over the speakerphone: “Blah blah, passengers, remember, the escalator is a means of increased danger.” It's funny after Suvarnabhumi Airport, with its 5th floors, elevators, travelrs, and other infrastructures. But the stump is clear, there is nothing to declare there, planes do not fly, shops do not work. 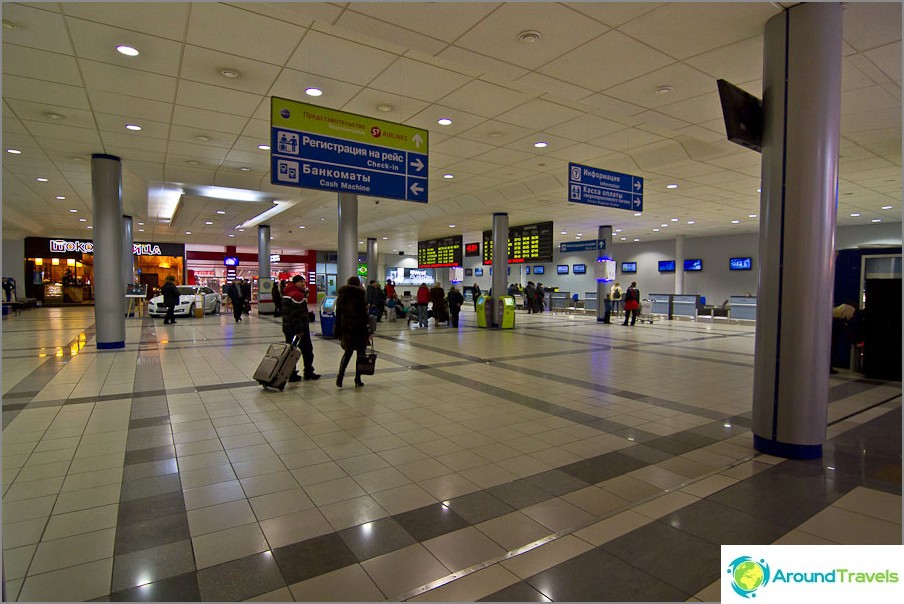 In any case, the local terminal is normal andwhy not make an international likeness and build a corridor between them, I do not know. Okay, I am, but not everyone will guess to read the forums, and not everyone will be ready to buy warm clothes for the sake of the flight. In addition to me, there were five other people who were dressed all summer. Although not everyone's warm clothes saved - the secretly flew to Moscow, packed in a sheepskin coat to the ears. So she called her boyfriend (most likely) and cried something about fucking cold. She really cried, she apparently had to face the first time in the winter. This is not a cold zone in the zoos of Thailand, where you can fight -5 ° temperature. But that was not the end of it. In the local terminal, the sleeves were not foreseen, and they put us on a bus that we should carry to the plane. So he is not heated, Japan mother! 5 socks under the sandals and other layers of my cabbage robes had to withstand it, because I’ve figured it all out. But the fact that we will be brought to the plane will be stupid for 10 minutes there, and then we will go back to the terminal, since the plane is not ready yet (it was impossible to find out in advance, nda) my brain could not foresee. 20 minutes spent on the bus at -36 ° did not like not only me, but all passengers dressed in winter. We were returning to the terminal, as in childhood, to mother in the arms. And the Thai continued to sob and swear in English in the telephone. I was already thinking that I would witness a break in this relationship ... 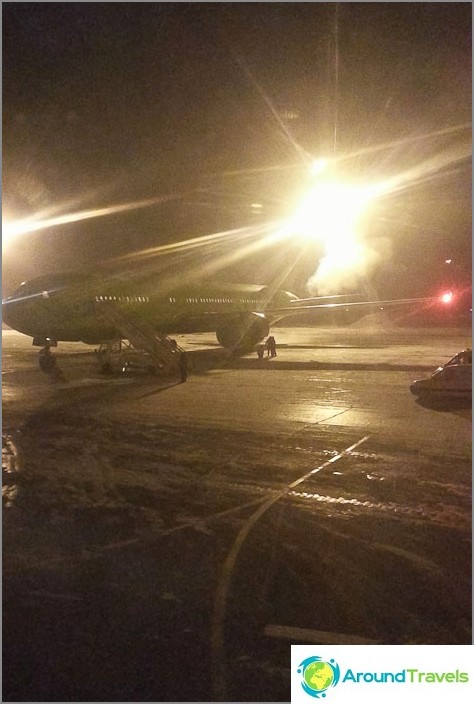 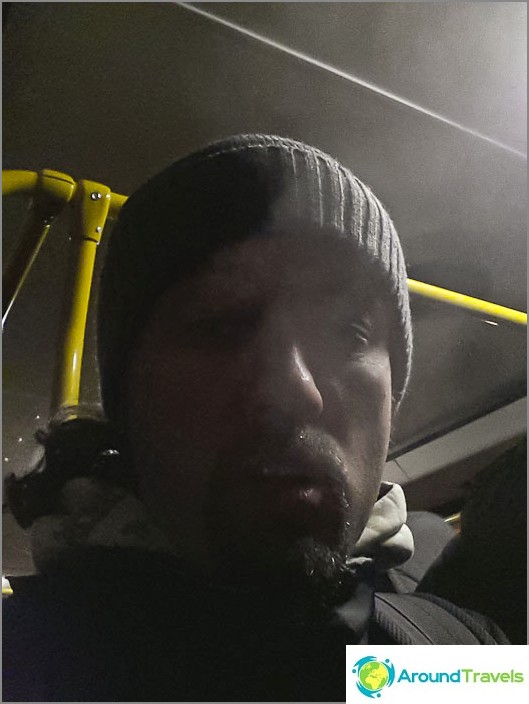 On the bus, when they were standing, I thought I would throw off the hoof

But nothing, we got warm in the terminal and in the secondsince we were taken to the plane without incident, we were let into it, and apologized a little later and began to feed again. Thai fell asleep, I stared out the window ... 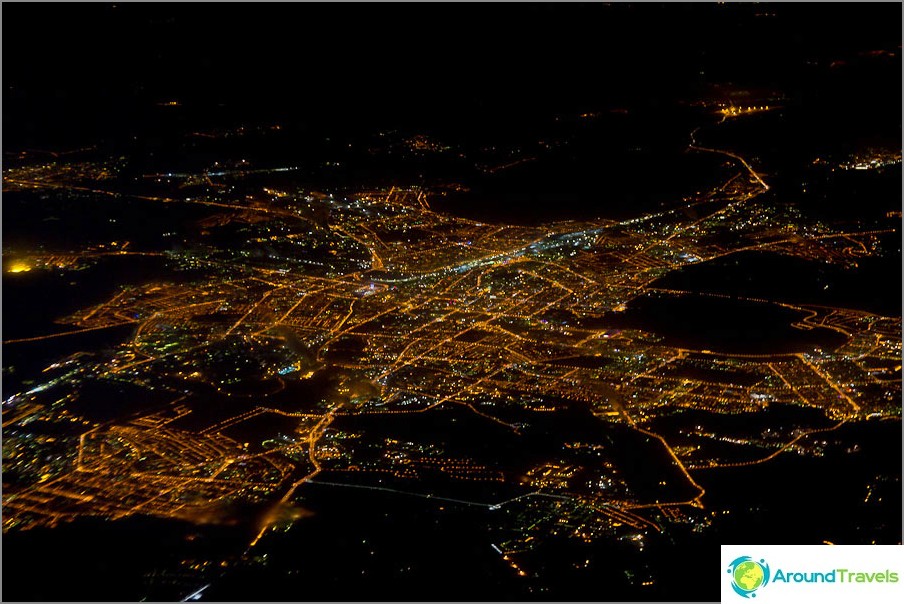 Some city from the porthole 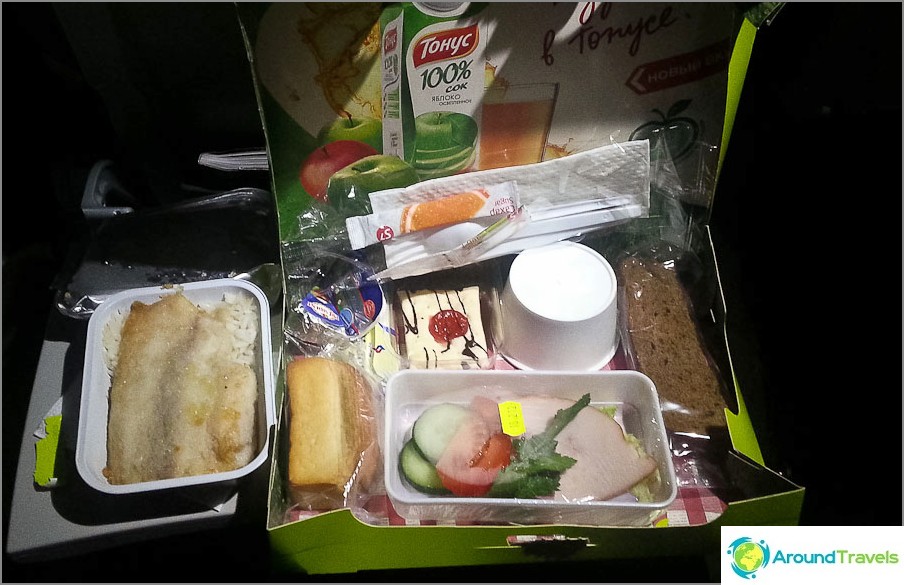 The food on the second segment was so much better on the Bangkok-Novosibirsk flight. 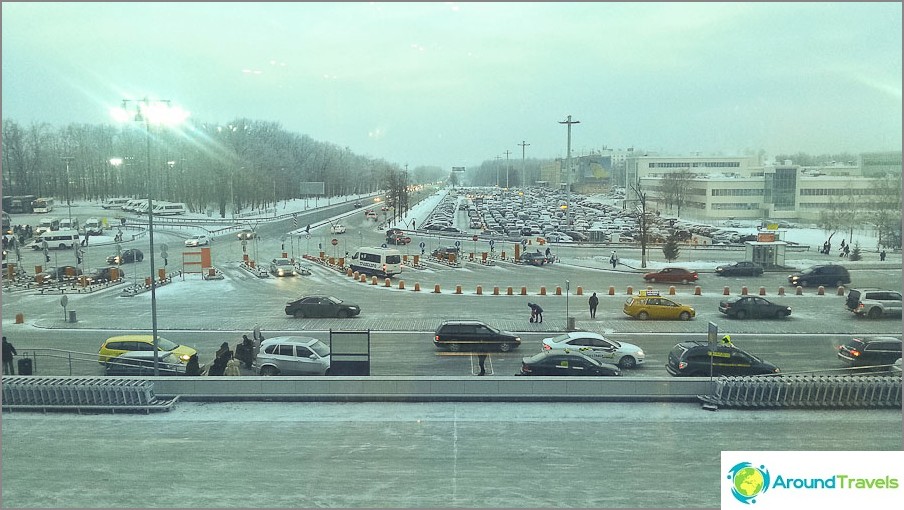 View from the window of Domodedovo in Moscow 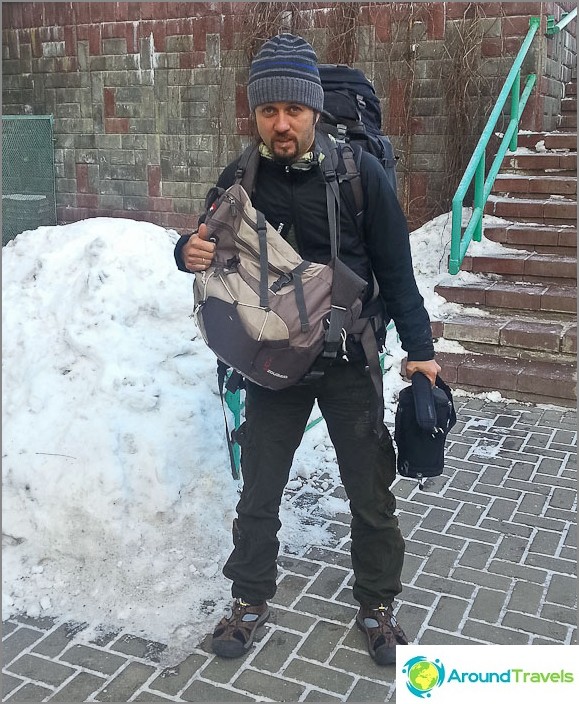 I survived, and returned home to my Butovo!

P.S. Baggage is obtained in Novosibirsk and then surrenders again to Moscow. Passport control is also in Novosibirsk. This cant is not S7, it is a requirement of the Russian Federation.

The pleasant country of Macau is not that ...

How much are flights to Milan?