White Sand Beach is oneof the most popular beaches on Koh Chang. It is the very first along the way from the pier on the western side of the island, after you arrived on the ferry. We now do not take into account the eastern side of Koh Chang, because the resort and the best beaches are located exactly on the west coast.

The eastern part is not suitable for a beach holiday. In general, no matter what western beach you are going to, at first you will pass by White Senda.

The road to White Sandu is quite longthe pass and almost half of the beach remains hidden under the mountain below. The road goes on top, parallel to the edge of the sea and the beach, and for the first time you will have a view of the sea only on a small viewing platform before the road goes down.

Unknowingly when you first come toWhite Send, it seems to you that you arrived at the beginning of the beach, although in fact it is already the middle of the beach, and the rest of it is left behind you. However, in that part of the mountain there is no infrastructure, and, most likely, you will simply go there on foot to swim.

If you face the sea, the left side of White Senda is located between Kacha Resort

- This is the most crowded, most famous part of White.Sand Beach, because it is in this part that all the cafes and hotel shops are located, and it is here that the flat terrain, suitable for quick and inexpensive building.

All over this site allthe infrastructure borders the beach line and it is almost the only western beach of Koh Chang, where there are no secondary parallel streets between the main road and the sea - only perpendicular passages to the water through a solid array of buildings.

Along the coast to the left of Kacha Resort quietlystones begin and gradually the beach goes from sandy to the rocky to rocky, and among themselves it is called here Pearl Beach. But the area itself continues for some time along the sea, gradually moving to Klong Prao. There are hotels and resorts all along the route, but you have to understand that you have to go to the sandy part to swim.

If we look to the right of the KC Grand Resort, then therethere will be there the most part of the beach under the mountain. In my opinion it is the most beautiful here, do not take the time, go there. After some time, in the direction of travel to the right end of the beach, a stone ridge will appear in front of you.

This is not the end! Rocks have to go or on the water, or on the bridge through the cafe and the hotel Rock Sand

Behind these stones begins the secret part of White.Senda Secret, it is called conditionally, I called it that way, but in fact it is - for some tourists this part of the beach remains a secret precisely because of the alleged impasse or because of laziness to go further.

Therefore, there are very few people there. Another option to get here is to go down the secondary road, the turn of which is on the pass, according to the sign for White Sand Beach Resort

which, in fact, occupied the entire right end of the beach.

On Koh Chang, in principle, not the deepest beaches andyou can fully swim in the depths only on two beaches. White Send, by happy coincidence, refers to these two. The left side of the beach is shallower and you will have to walk 30 meters behind the depth.

With children it was convenient. The middle is a little deeper, and behind the stone ridge on the right and where White Sand Beach Resort is, the very depth begins. Three meters into the sea you go in, and immediately water down your neck. The right end of White Senda is the deepest place, and there are stones at the very edges of the beach under water.

Low tides are pronounced, especially in season. Low tide begins in the late afternoon and the water goes far enough, swimming is no longer possible. If we talk about the right side, near Pence Bangalo - there it is less pronounced, but most likely there will also be a lack of water.

In the morning you can swim all over.throughout the beach, except for the left, rocky part. Although the people are bathing, no one is confused by the lack of depth - after all, one can splash even if there is water to the waist. The left side, in spite of its petty stuff, is crowded, and there is always a lot of children here.

The sand is really white, but not the Maldives. White exactly in the part that is closer to the line of hotels, that is, the farther from the sea, the fluffier and lighter. The strip of the beach from the KC Grand Resort and further to the left retains its width at high tide, and right there, there is just white sand.

To the right of the COP Granda sand significantly noticeably grayer that in the dry, that in the wet. In short, on White Senda (in English, White Sand - is "white sand") straight white sand a bit.

Trees, in principle, enough throughoutbeach, somewhere less, somewhere more, which means enough shadows. But the freebie lasts up to two hours, not longer, then the sun comes to the western side of the island and the shadow remains only under umbrellas.

There are more deciduous trees on the left edge of the beach, and more palm trees on the right. Swing is not much, but there is. Sun beds - just opposite the territory of hotels and resorts.

Left side of the beach 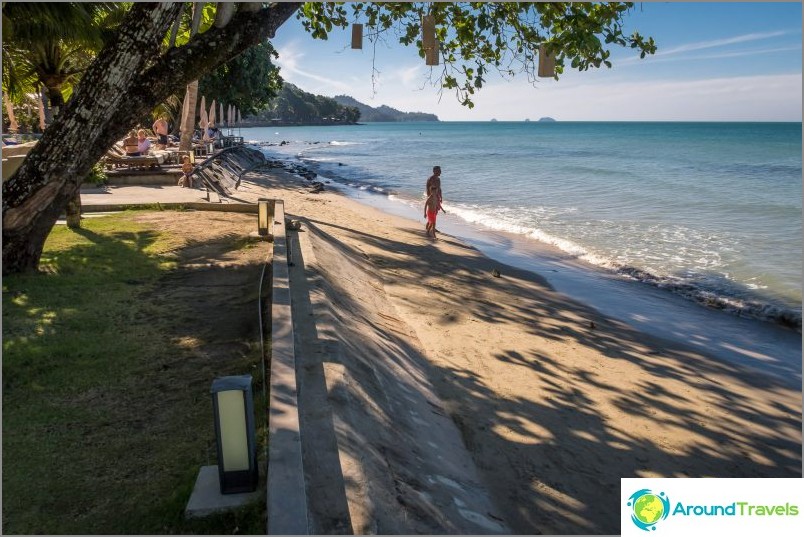 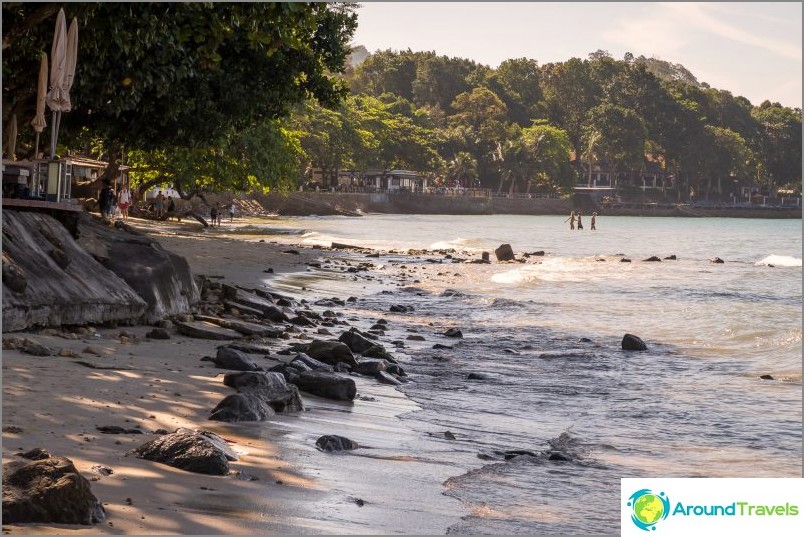 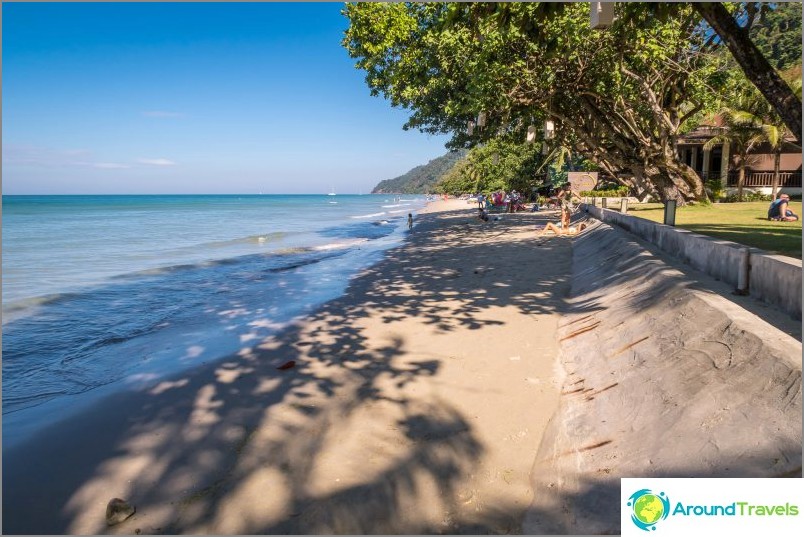 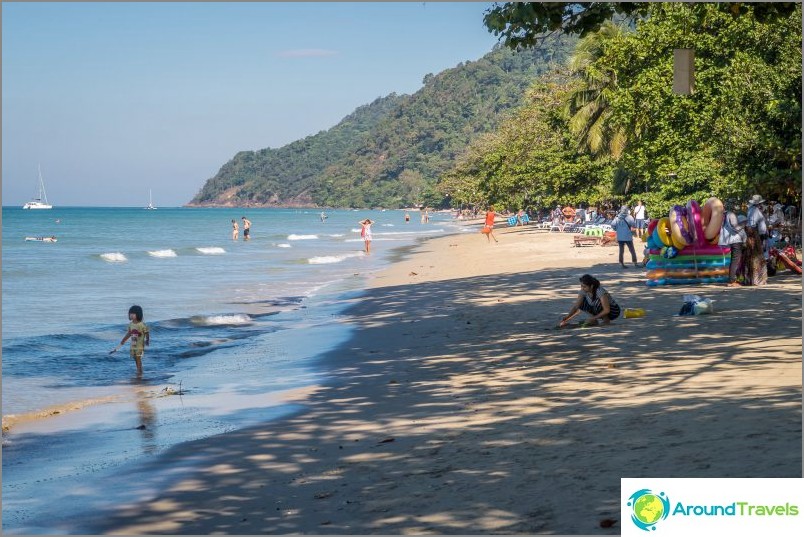 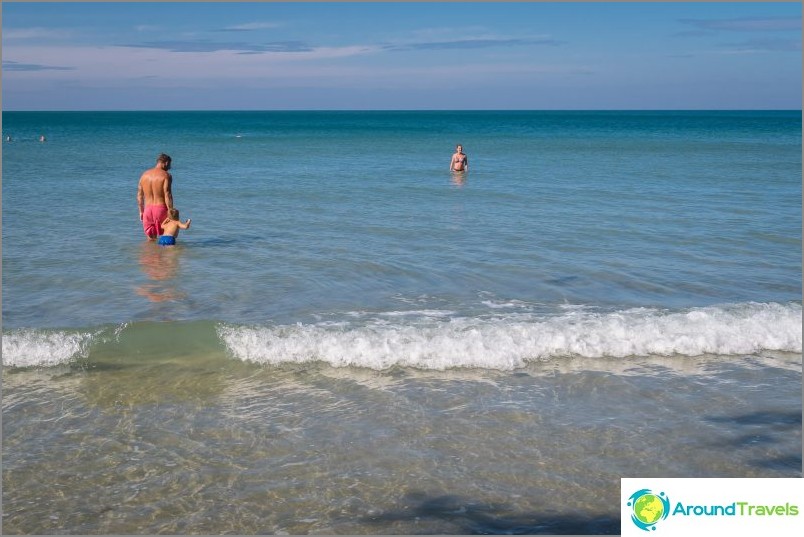 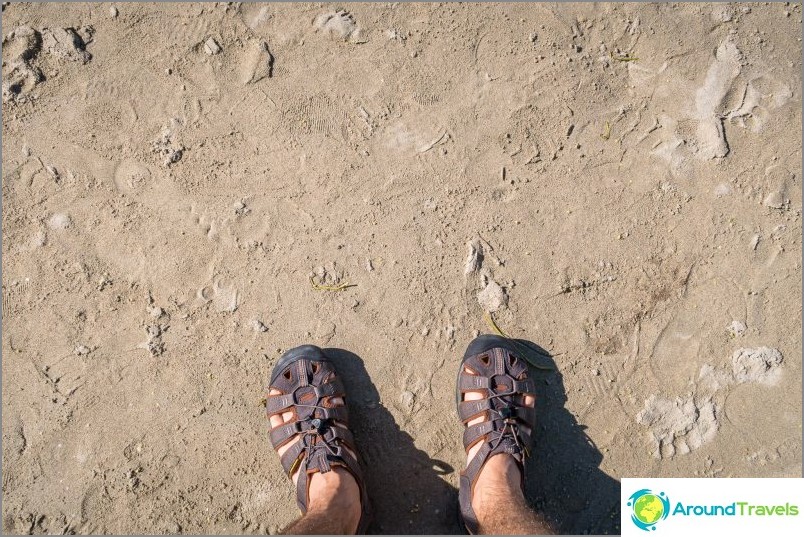 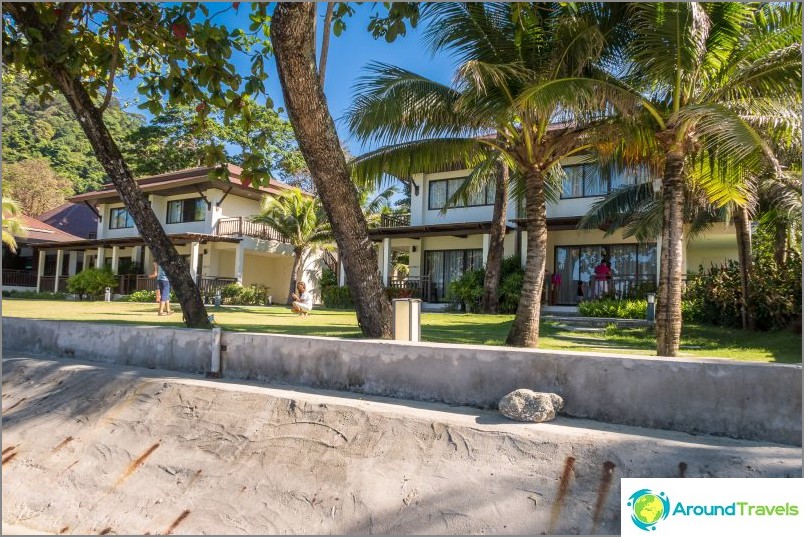 Middle of the beach, about 7-eleven 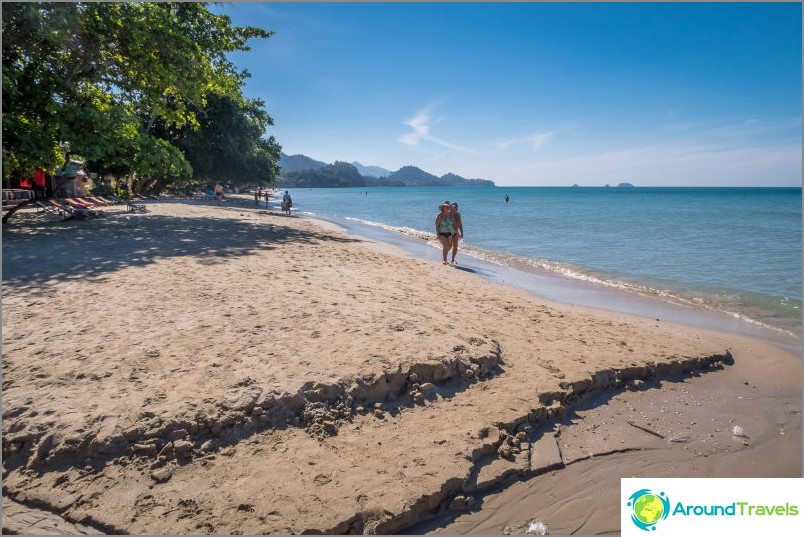 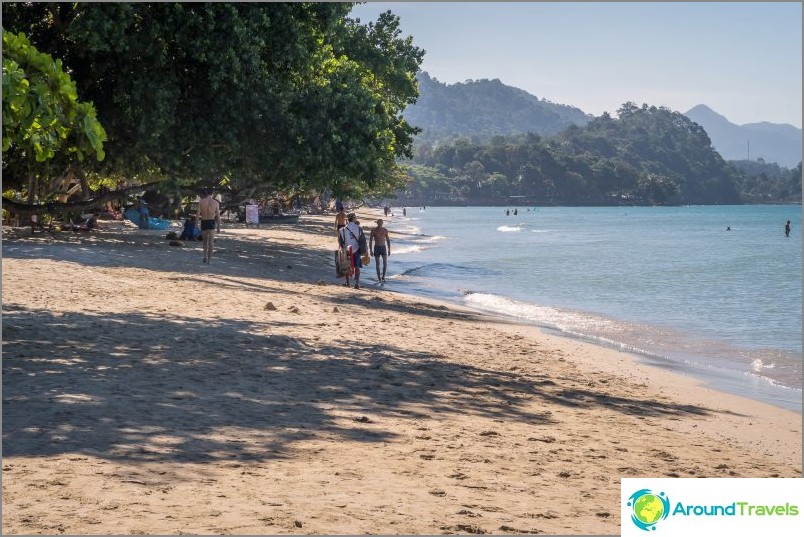 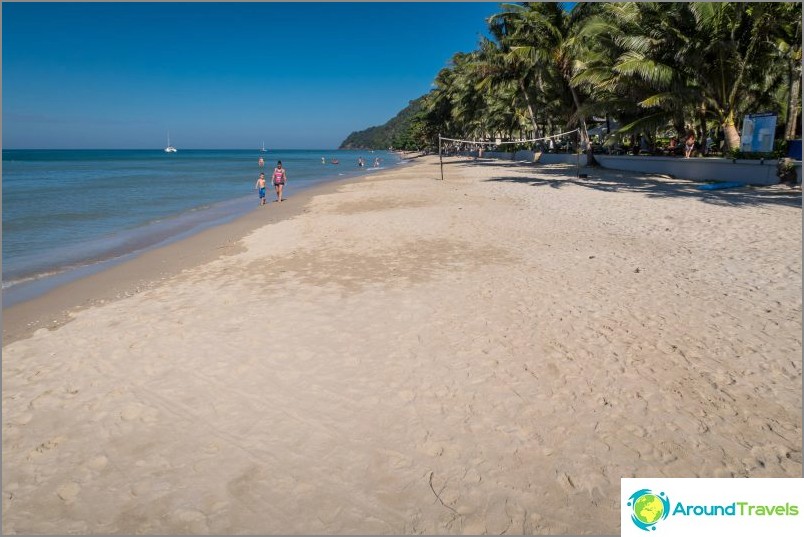 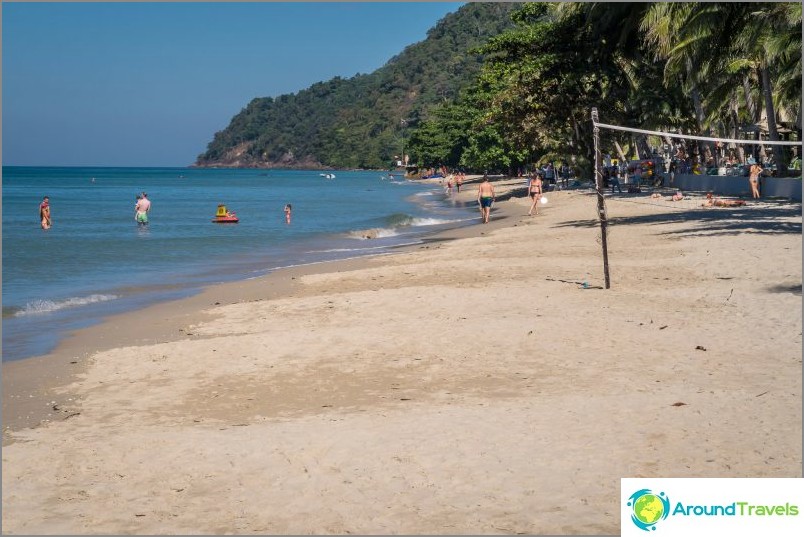 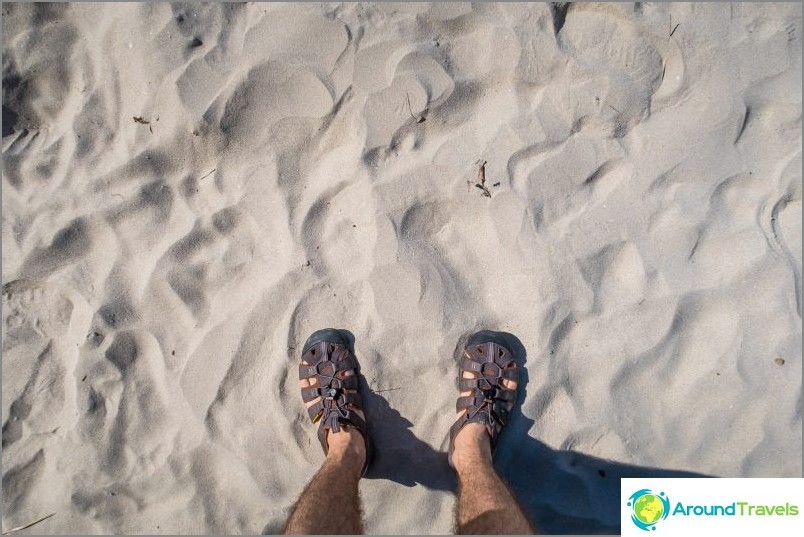 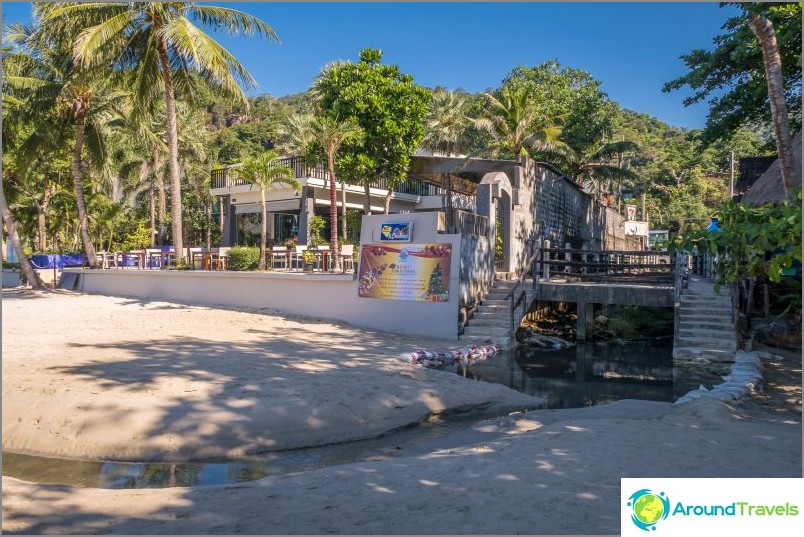 The path goes from 7-eleven along the creek

Right side of the beach 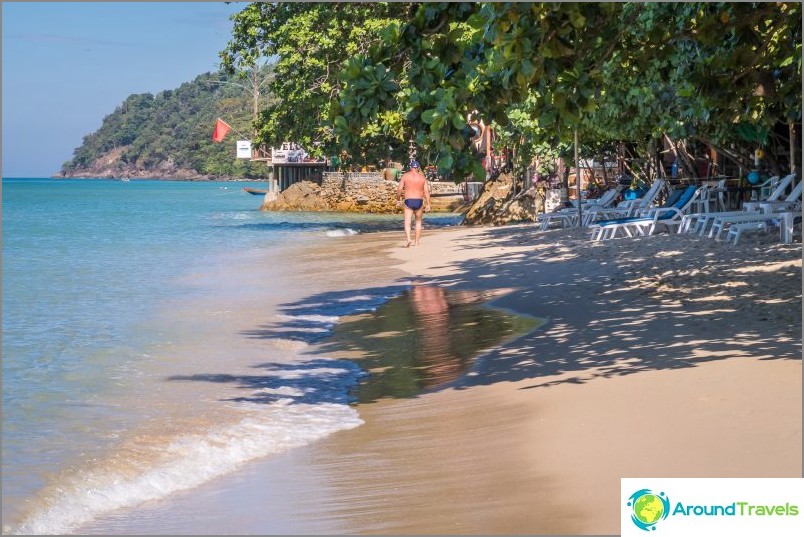 On the way to the right end of the beach, you have to go through the rocks 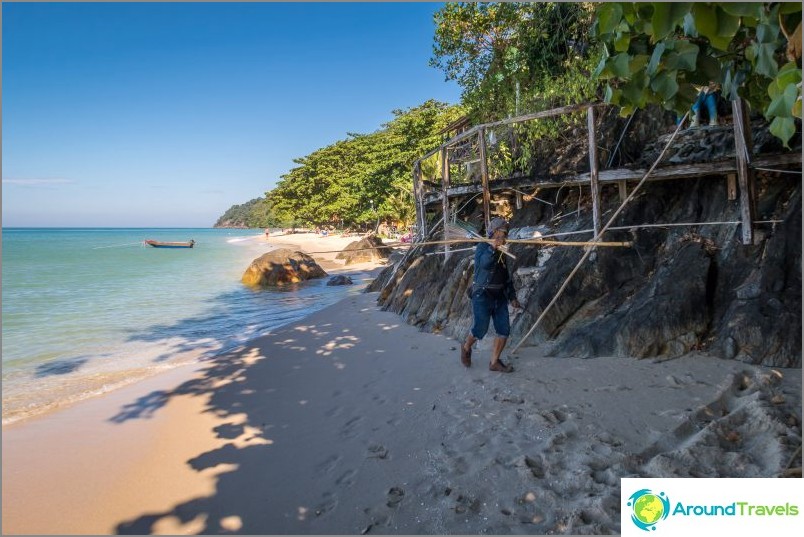 There are bridges and a cool cafe 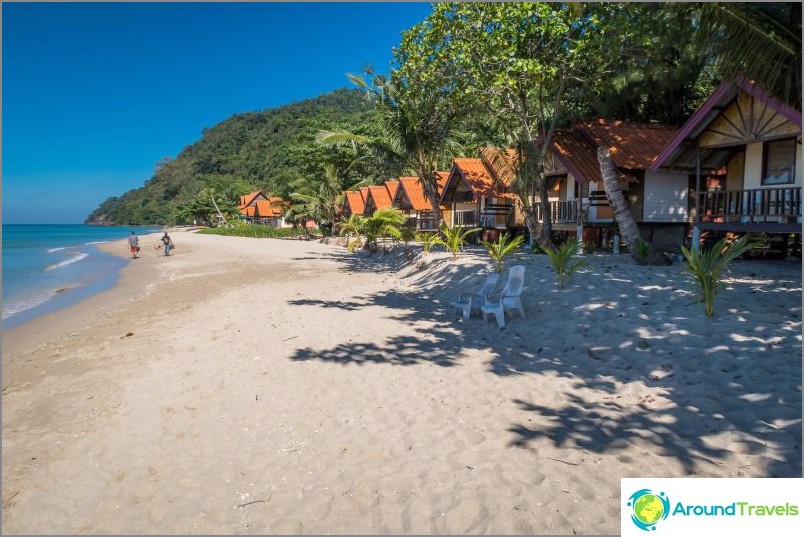 In the right side there is a secluded bungalow resort. 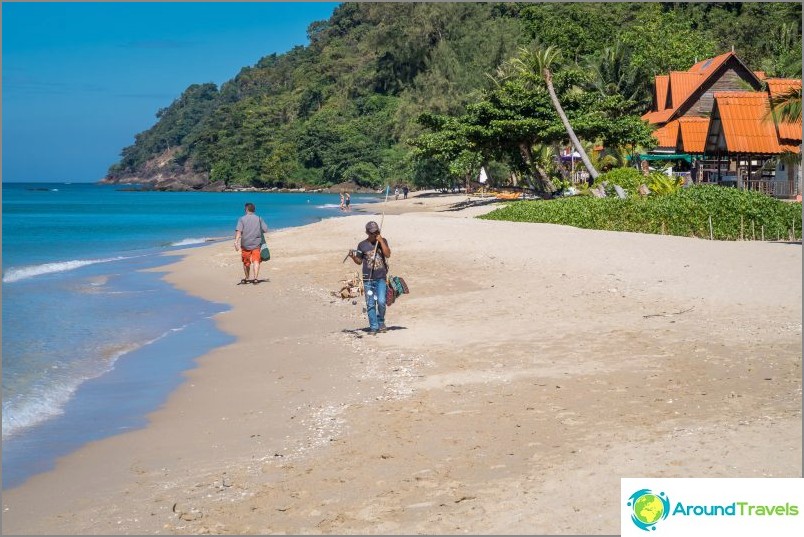 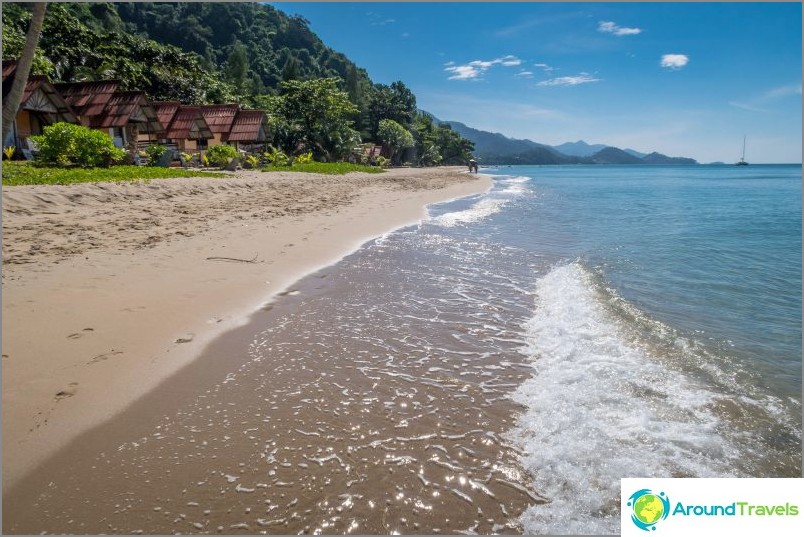 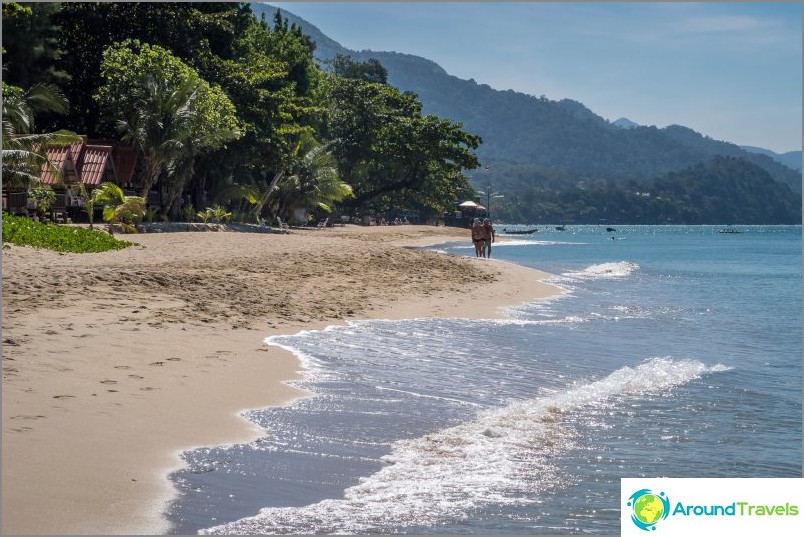 The infrastructure is on the whole flat part.district. In the middle of the beach it is most of all, under the mountain on the right, as I said, there is almost nothing but a few hotels. To the left begins the rise of a small hill and the infrastructure begins to thin.

Along the coast there is a road andthere are hotels between the road and the coastline. It is here that there are banks, shops, an evening market with shopping malls, Tesco Lotus minimarkets, Macro wholesale supermarket and closer to the next Klong Prao beach there are Tesco hyper markets, Big Ci and a hospital.

White Sand Beach on Koh Chang is the mostdeveloped. If you need civilization, then you are here. At the same time, I would not say that this area is very crowded, if we compare it with Phuket. However, if you need direct privacy, then of course, you need to move on, for example on Lonley beach or settling on the right side of White Senda under the mountain, though then it can be a long walk before all civilization (depending on how far you go to the right).

What else i like that this beach is comfortablelocated, from it you can go to the south along the western part, and you can go south along the eastern part. Let me remind you that there is no ring road around the island, since the road is not connected in the south of the island. Also here is full of all sorts of travel agencies where you can buy all sorts of excursions and tickets to Bangkok and Pattaya. 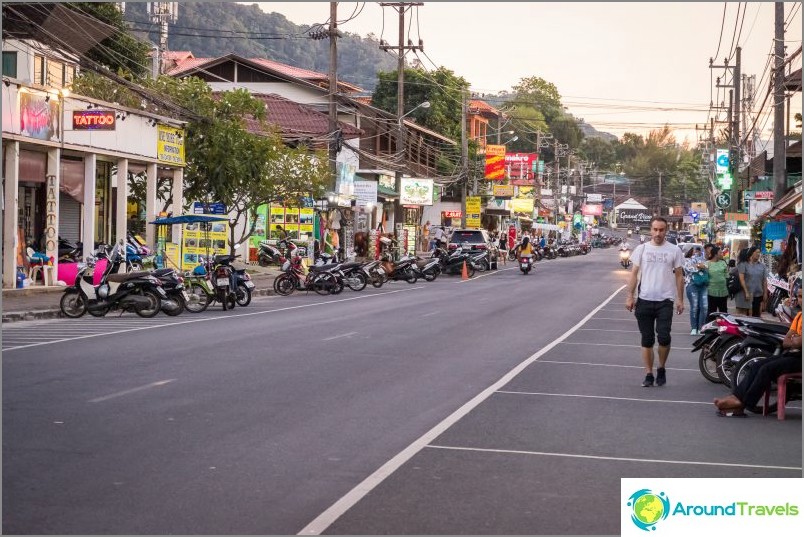 The main street of White Senda, it’s a track

At the very beginning, even before descending to White Sand, there areobservation deck, though not equipped. In fact, just a concrete roadside and you can stop to see the panorama of the sea. On the hill between White Sand and Klong Prao there is a lookout, on the road there is a pointer to a viewpoint of a mediocre view of the coast - one way.

Along the entire beach is full of hotels, across the road -cheaper than on the first line, although accessibility to the beach is almost the same, the area is quite compact. In fact, all the buildings in this area are simply stretched along the road and gradually move to the area of ​​Klong Prao Beach. There is a small hill between White Sand and Klong Prao.

It is easy to overcome on foot. You can stay in resorts with large areas, with pools, and in small hotels or bungalows of varying degrees of authenticity, from concrete luxury rooms with panoramic glass walls to concrete-wooden chip bungalows. There are overlooking the sea even among the cheap.

The two most popular hotels here I have already called: Kacha Resort

. The second is more expensive and rated higher. Both on the first line and go straight to the beach. I stayed at Kacha Resort, I generally liked everything, I can recommend, here my review.

Separately, I want to note that the hotels are to the left, nearstone beach in the direction of Klong Prao - cheaper. There is the first line there, but the beach is unsuitable. One of these first-line hotels is Penny’s Resort, which is quite popular, reasonably priced and quiet.

And do not be confused by the name, it is formed from the name. I stayed in this place for the road in the bungalows The White Elephant

, as the sense from the first line is a bit (here is my review). And there is right next door to a good hotel Keeree Ele Resort

. Just need to remember that before the cupable part of the White Senda to go about 10-20 minutes on foot along the road.

White Sand is closest to the ferry pier, and literally 10 minutes drive to it, and the Sangteo (taxi) costs only 50 baht, that is, it is faster and more convenient to get here.

Walk to the beach through almost any cafeor resort - they all stand on the first line. There is also a separate entrance between the KC Grand resort and the 7-eleven online mini-market, which you look up to as soon as you go down from the pass. The passage to the beach goes along the stream.

White Sand Beach
Literally translated as the beach with white sand. The most developed and popular beach on the island. Need a civilization - you here. But there are not so many people.
More about the beach. 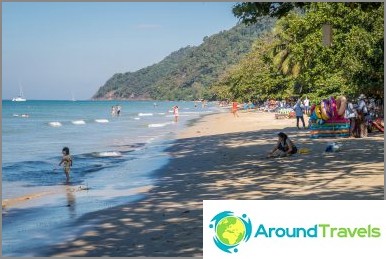 Literally translated as the beach with white sand. The most developed and popular beach on the island. Need a civilization - you here. But there are not so many people. Read more about the beach.