If you decide to visit beautiful city of kuala lumpur On your own and already know what sights you are going to visit, the most important thing to read about is the transport in this city.

All of the above types of transportintersect in the main transport hub of the city KL Sentral. Inside it are the LRT and KTM Komuter stations, and the KL Momorail station is located about 200 meters from the station building. 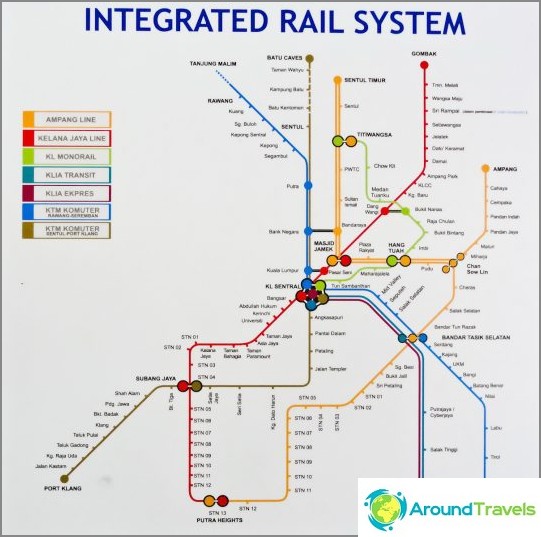 Unfortunately, all the above types of transport tickets are mutually invalid. Often, in order to change from one to another, you have to walk a bit around the city.
The main attractions of Kuala Lumpur can be easily reached using LRT or Monorail. 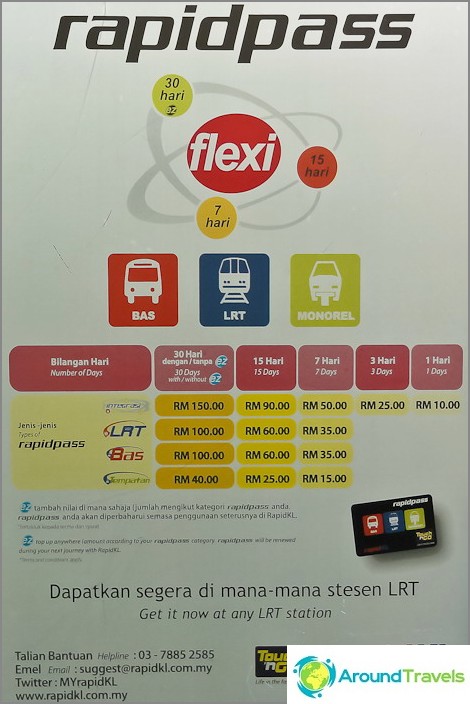 A good explanation of Kuala Lumpur's payment system can be found here.

2, 3 Orange, branching line Ampang (old name Star).
Ticket price depends on the destination station, on average - it is 1.60 RM. Metro is open from 6:00 to 11 with something, on holidays and weekends closes earlier.

The reviews found on the Internet often say that the metro lines are not connected to each other, you have to pay separately for a trip on each branch, and you need to go to the city for the transfer.
Rates for travel on the subway LRT Kuala Lumpur 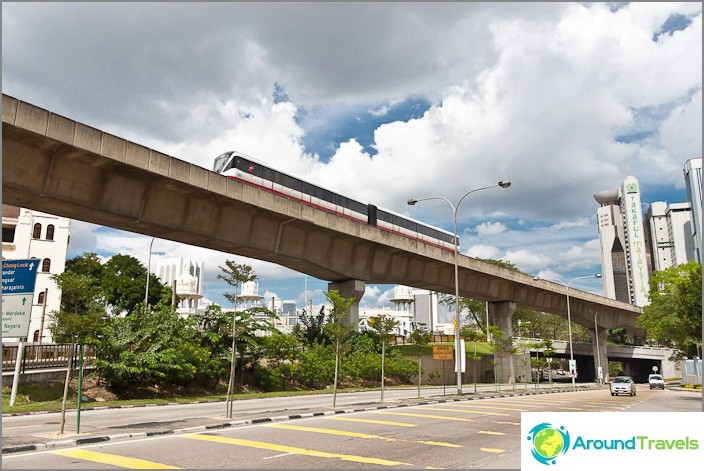 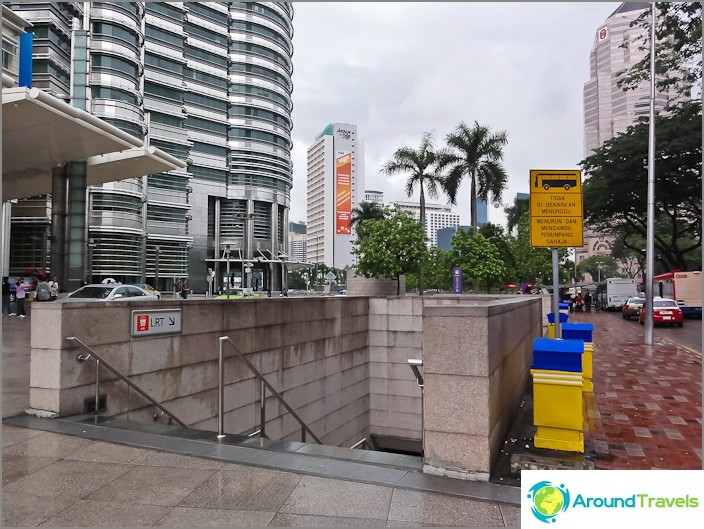 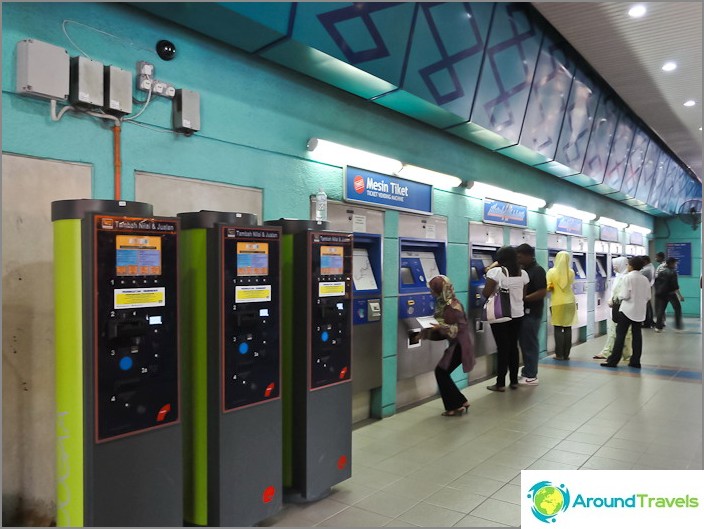 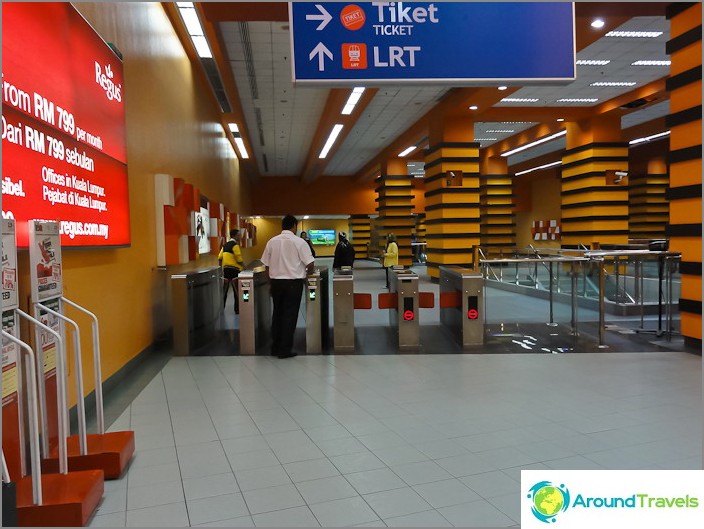 Turnstiles in the LRT metro in Kuala Lumpur 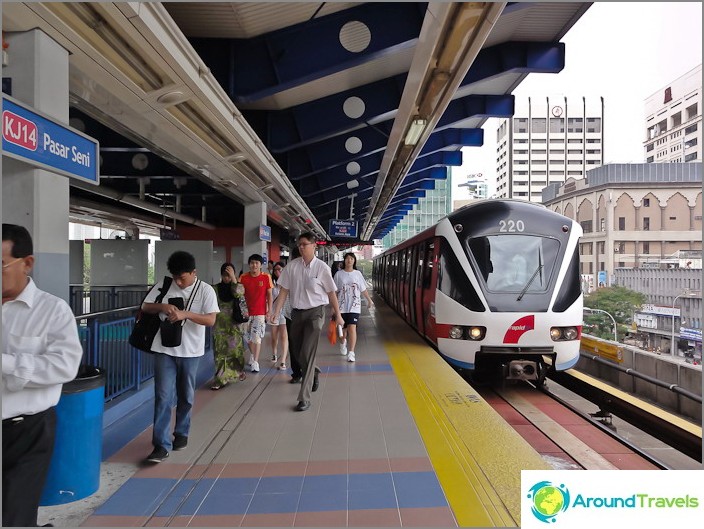 At some stations, redundant glass doors have been prudently made for security. 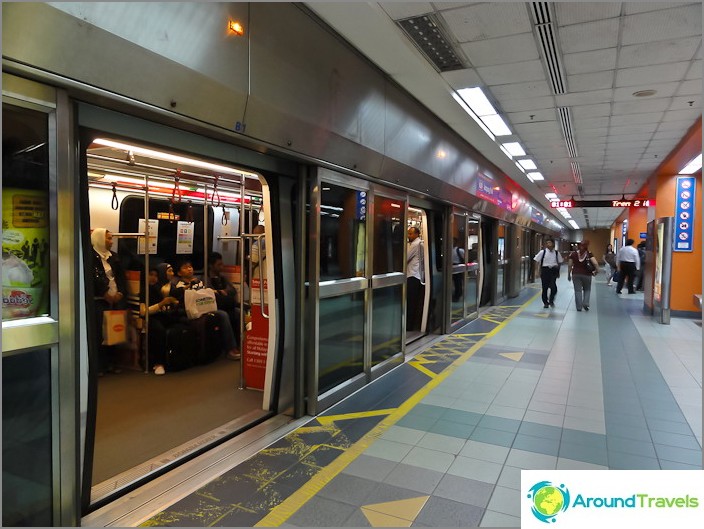 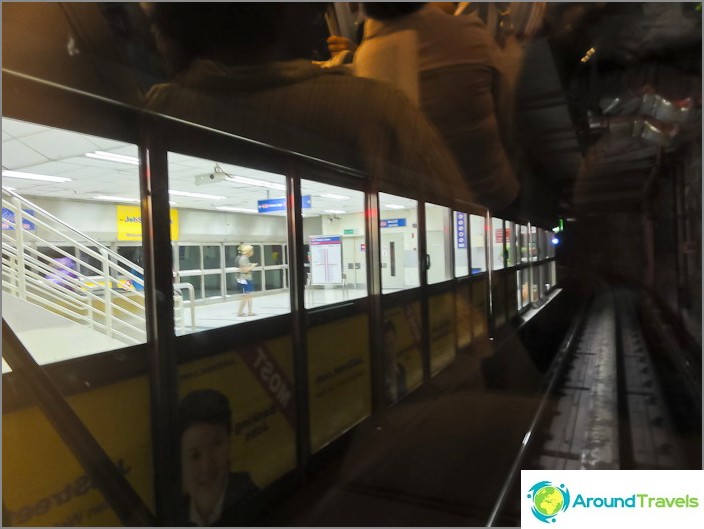 LRT subway Kuala Lumpur works from 6:00 to 23 with something. Closes earlier on weekends and holidays. Monorail metro, consisting of one line. Small trains with machinists run through the center of the city, through the so-called Golden Triangle. This type of transport allows you to quickly and visually get acquainted with the main attractions of Kuala Lumpur.

Ticket price can be found here. 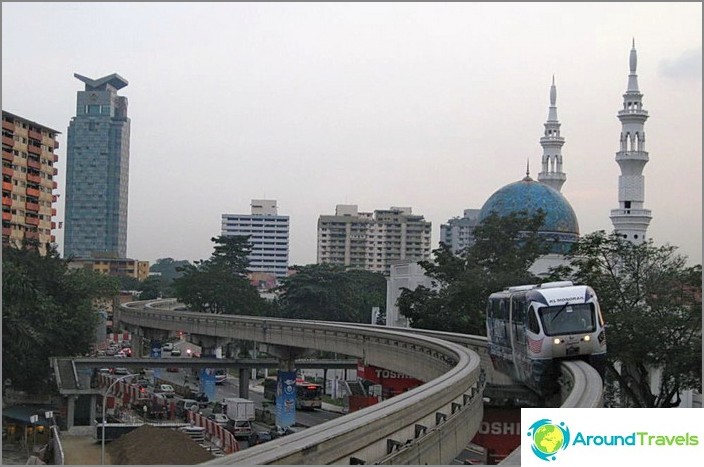 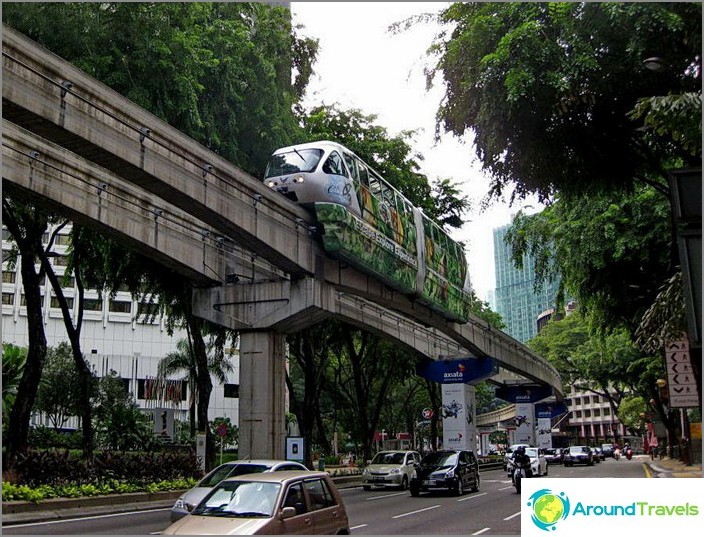 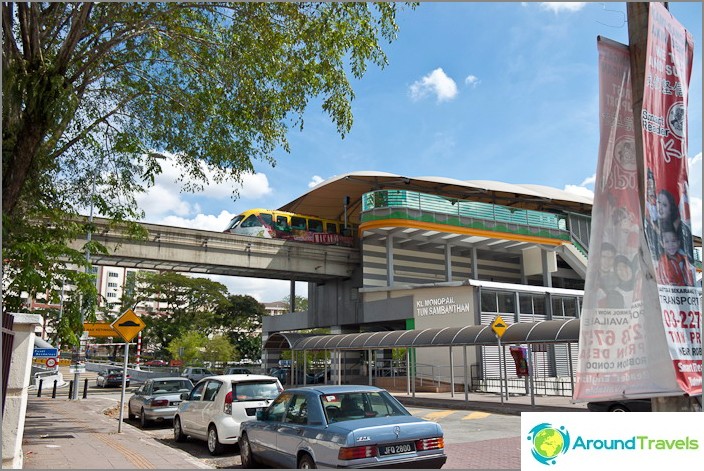 Electric trains passing through the city andplying at certain intervals: in the morning and in the evening - at 15 minutes, in the afternoon - at 20-30 minutes. Tickets are sold at the box office and vending machines. The ticket price starts from 1 RM and depends on the distance of the destination station. Trains start walking from about 5:30 to 22: with a tail. 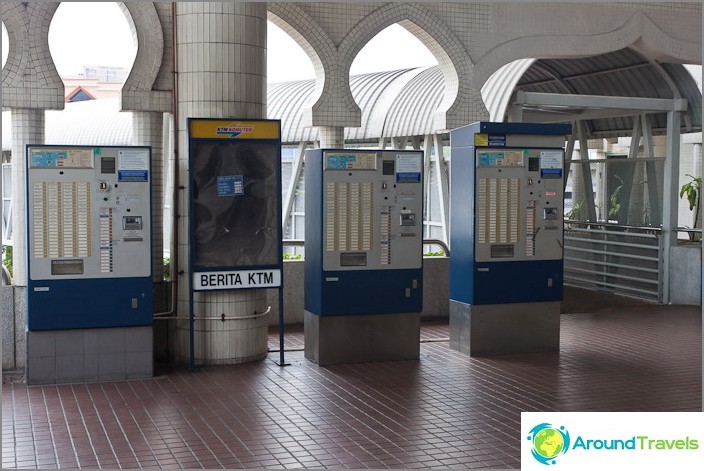 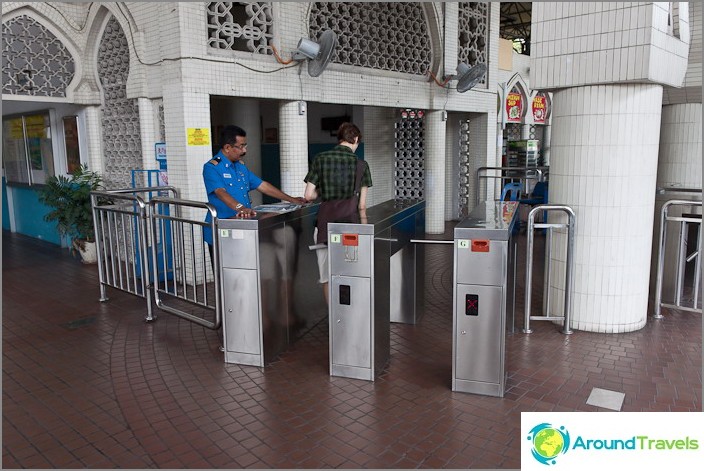 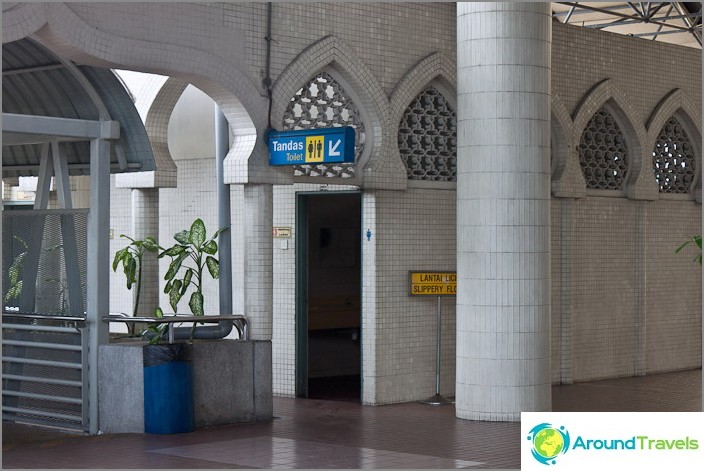 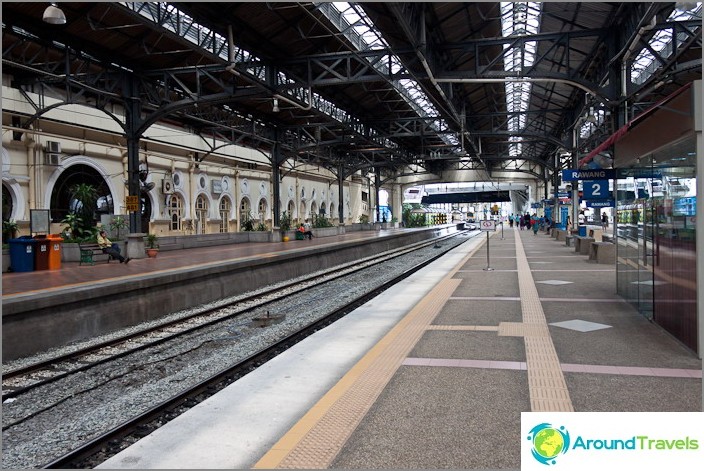 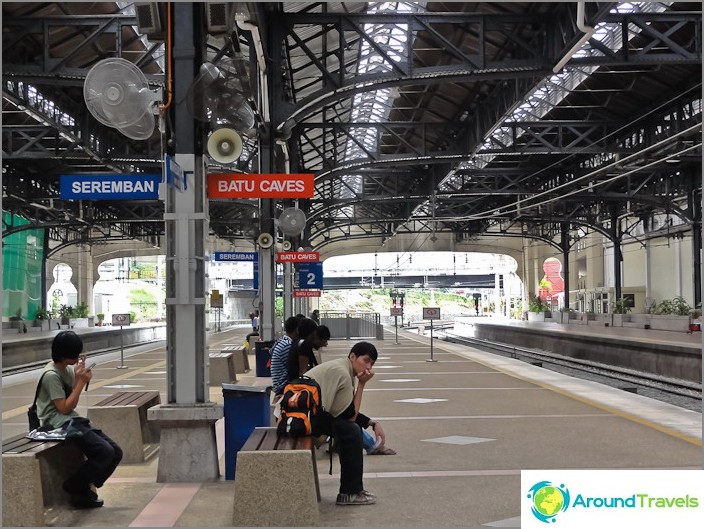 Moving by bus to Kuala Lumpur can be difficult due to the large number of traffic jams.

Hop On - Hop Off Buses

Sightseeing buses that allow you to drive around the city all day long, making an unlimited number of landings. Cover 70 sights of Kuala Lumpur and make 22 stops.

Red-white and black-yellow cars withMostly friendly taxi drivers who speak English at the very least. The fare is not very expensive, the main thing is to ask the driver to drive over the counter. Landing costs 3 RM.

We were lucky to use only three types of the above vehicles: LRT, KTM Komuter and taxi.

LRT
It is easy to buy a ticket using a machine gun onstation. All teams are duplicated in English. Choose the name of the station you need and the number of tickets by clicking directly on the monitor screen, get a ticket, pass through the turnstiles, pushing the ticket into a special slot and catching it a little further, and do not forget to take it with you, because you will need it go out. When you exit again thrust the ticket into the slot and, saying goodbye to him forever, go out into the city. 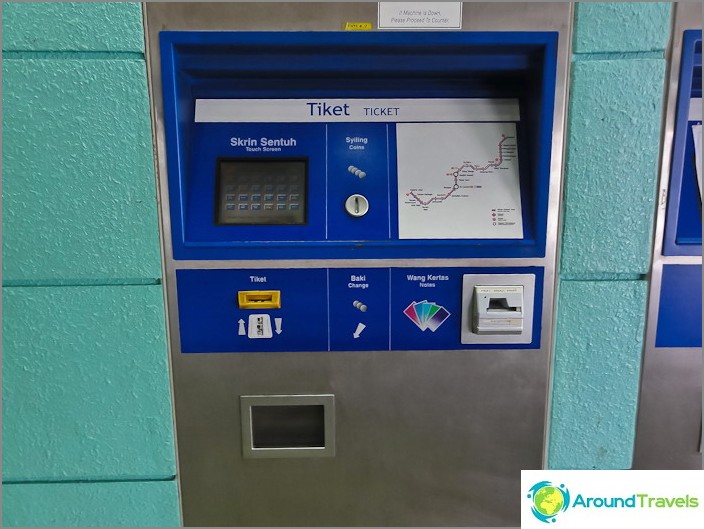 By the way, if you suddenly made a mistake and bought a ticket not to the station to which you arrived, do not worry. They say you can simply pay the difference in the window. Although we ourselves did not check it.

The stations have a toilet and a room for prayers thatit is very convenient, though surprising, why they are placed nearby. In subway cars Kuala Lumpur is cool, air condition works well, you can even freeze. 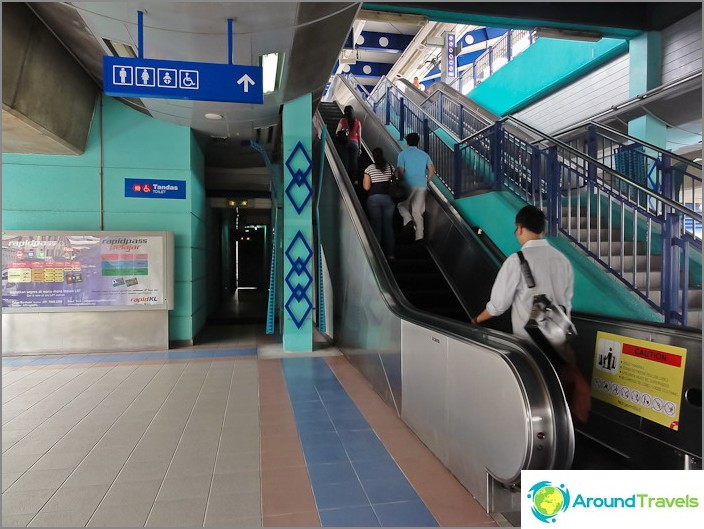 Toilet at the LRT station in Kuala Lumpur metro

I was surprised by a huge number of "no" in their subway. Maybe, of course, we, too, are forbidden to do all this, but we just do not know 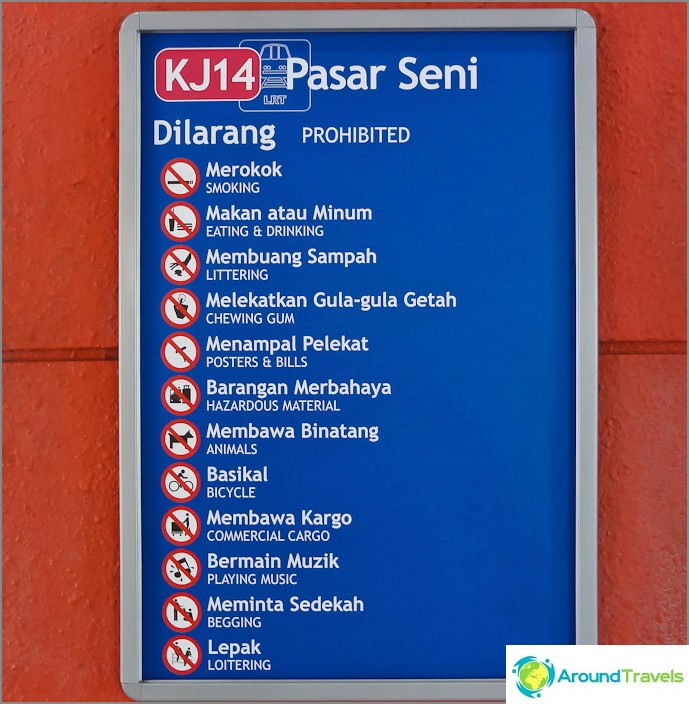 What is forbidden in the Kuala Lumpur metro 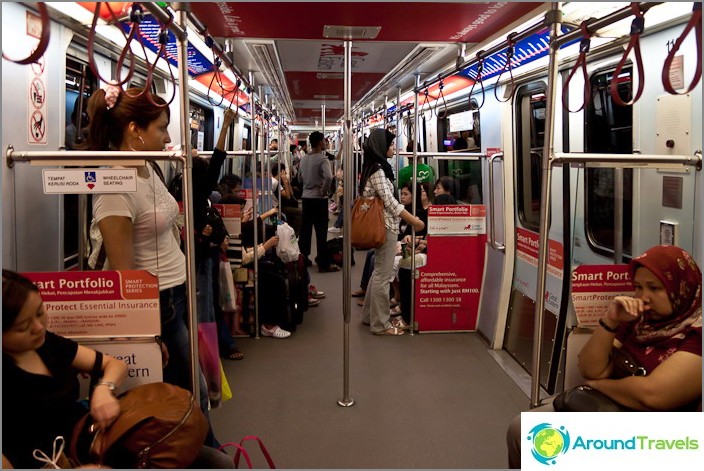 In the carriage of the LRT train, light metro in Kuala Lumpur

KTM Komuter
Recently, separate pink ones have been launched.trailers for Muslim women. It seems that non-Muslim women can go there, but men are asked to retire if they are at risk to go there. They themselves saw how a lady who entered a carriage in a scarf did not let a breathless man, who was afraid that he would not have time to run into another carriage. 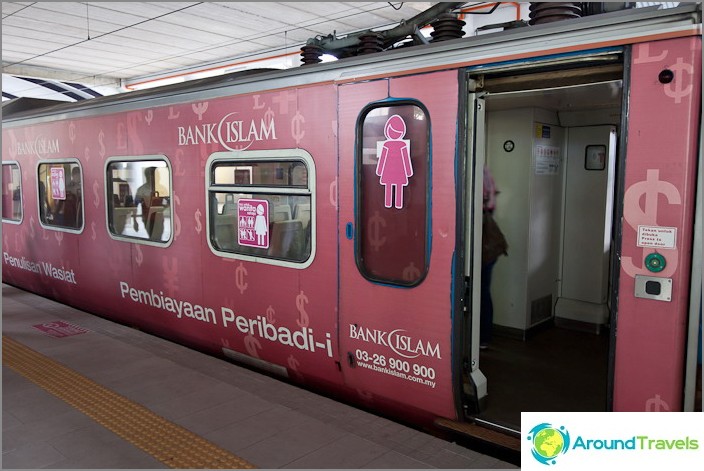 Inside the train hang plaques calling for news.worthy of being in transport: do not smoke, do not eat in the car, do not litter, do not stick gum, do not take animals with you. Most of all amused the ban for couples in love on indecent behavior. 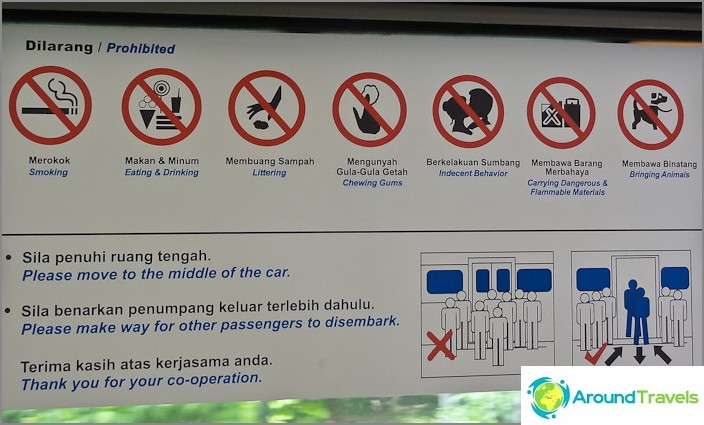 A bunch of bans on the subway in Kuala Lumpur 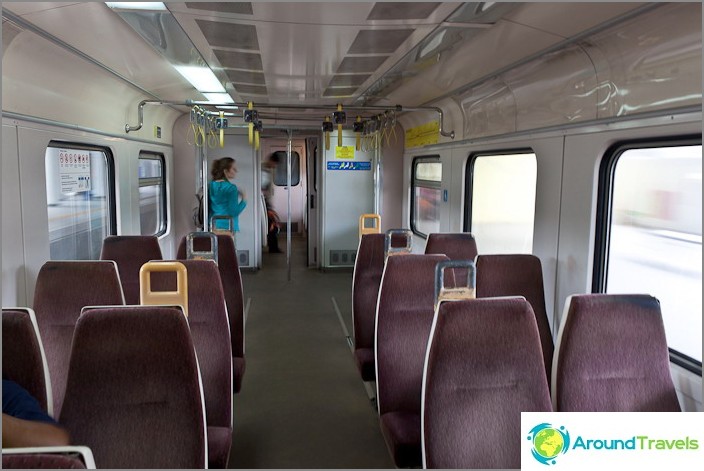 Inside the KTM Komuter wagon

Platform at Kuala Lumpur station usingsigns are divided in length into several sectors, for each of which arrives the train, following in a certain direction. At the station there are boards displaying the arrival time of the nearest train. 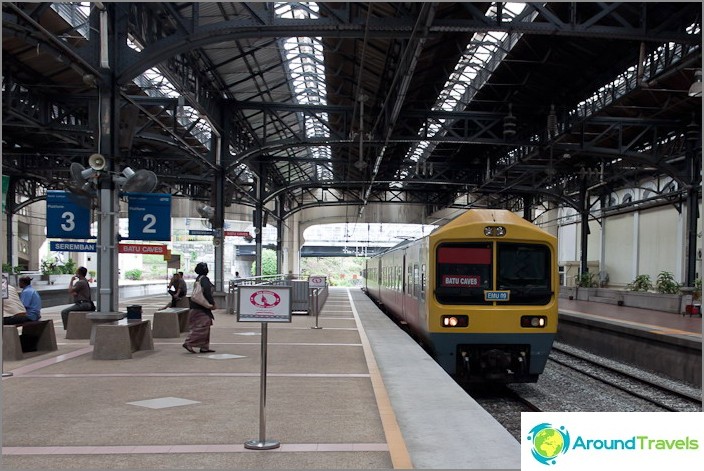 Pointers to the platform at the station KTM Komuter 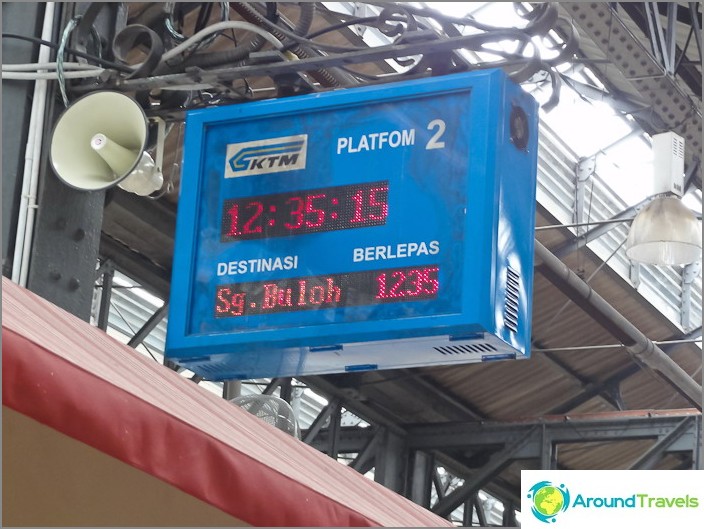 Taxi
We used only one time when traveling from Menara TV Tower. At the very TV tower to the nearest metro station they asked for 20 RM, but when we went down a bit and caught a taxi just outside, we were taken to China Town by the counter for 4.5 RM. The difference is indescribable.