Warsaw is a hefty enclave: two million inhabitants plus transit tourists and tourists. And if it were not for a competent logistics, developed, working on the clock transport network, the city would have choked with a stream of people and stood up rooted to the spot. Fortunately, the infrastructure in Warsaw is well thought out. There are: metro, trams, buses, taxis, automatic bike racer system. In addition, there is a high-speed railway linking Warsaw to the outskirts. And most importantly - the work of public transport almost does not stop during the day. For example, the subway on Friday - Saturday plows until three in the morning. Most of the buses go to the line every day at 5 am, they are replaced by night from 11 pm until half past four, that is, buses operate almost around the clock.

Buses, trams and metro in Warsaw

The most developed network is bus: about 200 routes covering 2,600 km of the capital. Less developed - the subway, it continues to be built. According to the latest data, it has two lines with a length of more than 20 km: north - south (22 stations), west - east (6 stations). The second branch will probably open only in 2015. So it’s convenient for the metro primarily to those who are based in the northern and partly southern areas of the capital. By the way, the Warsaw Metro has a more fresh, modern look than the Moscow one, since it was opened in 1995. 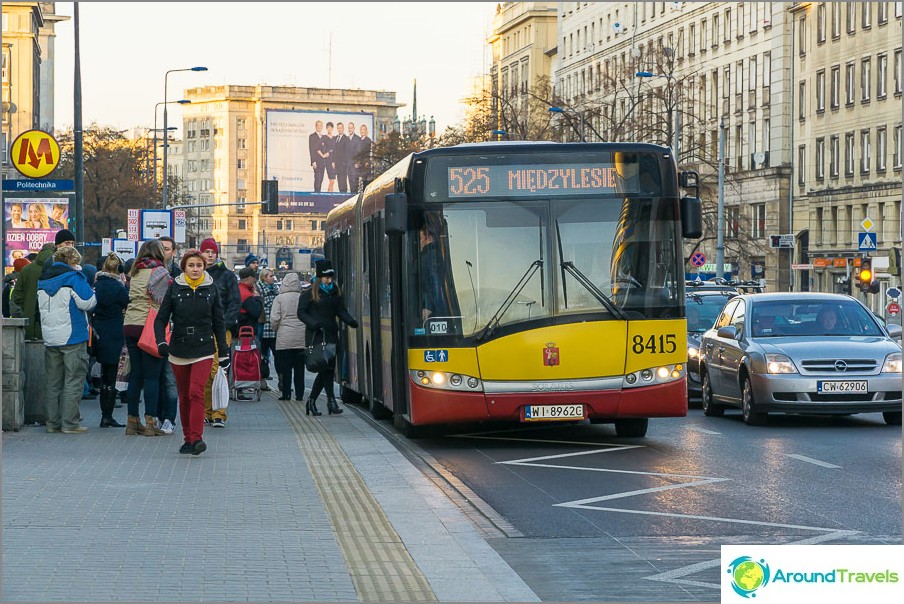 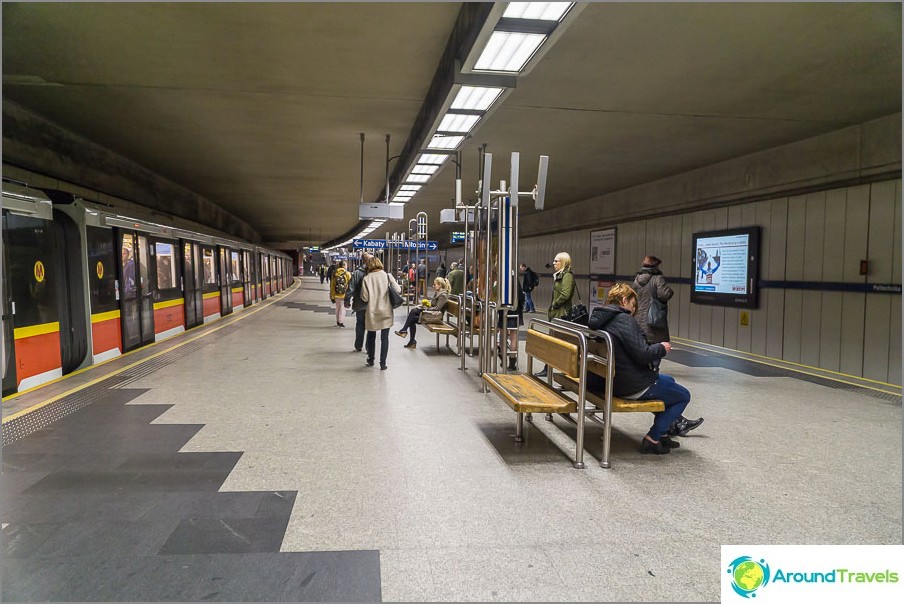 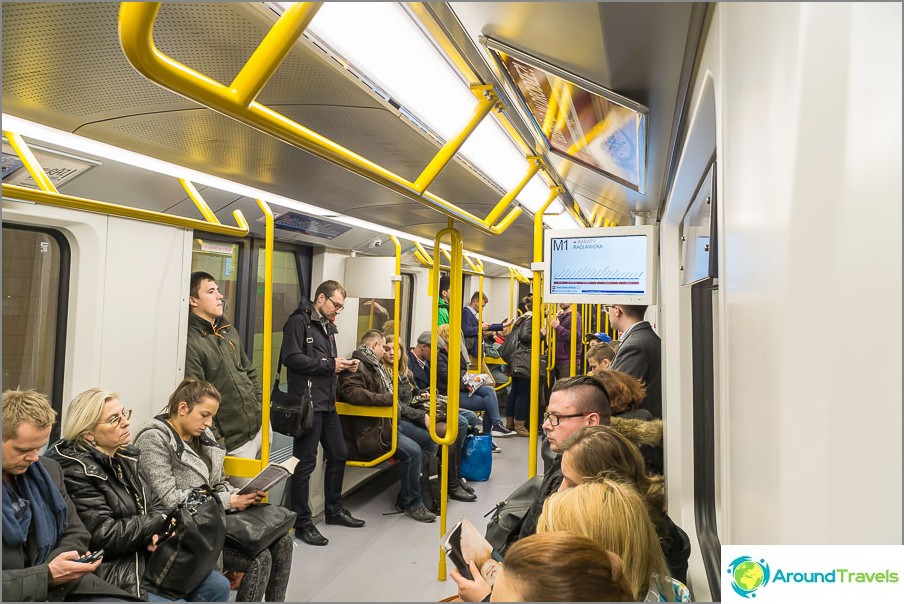 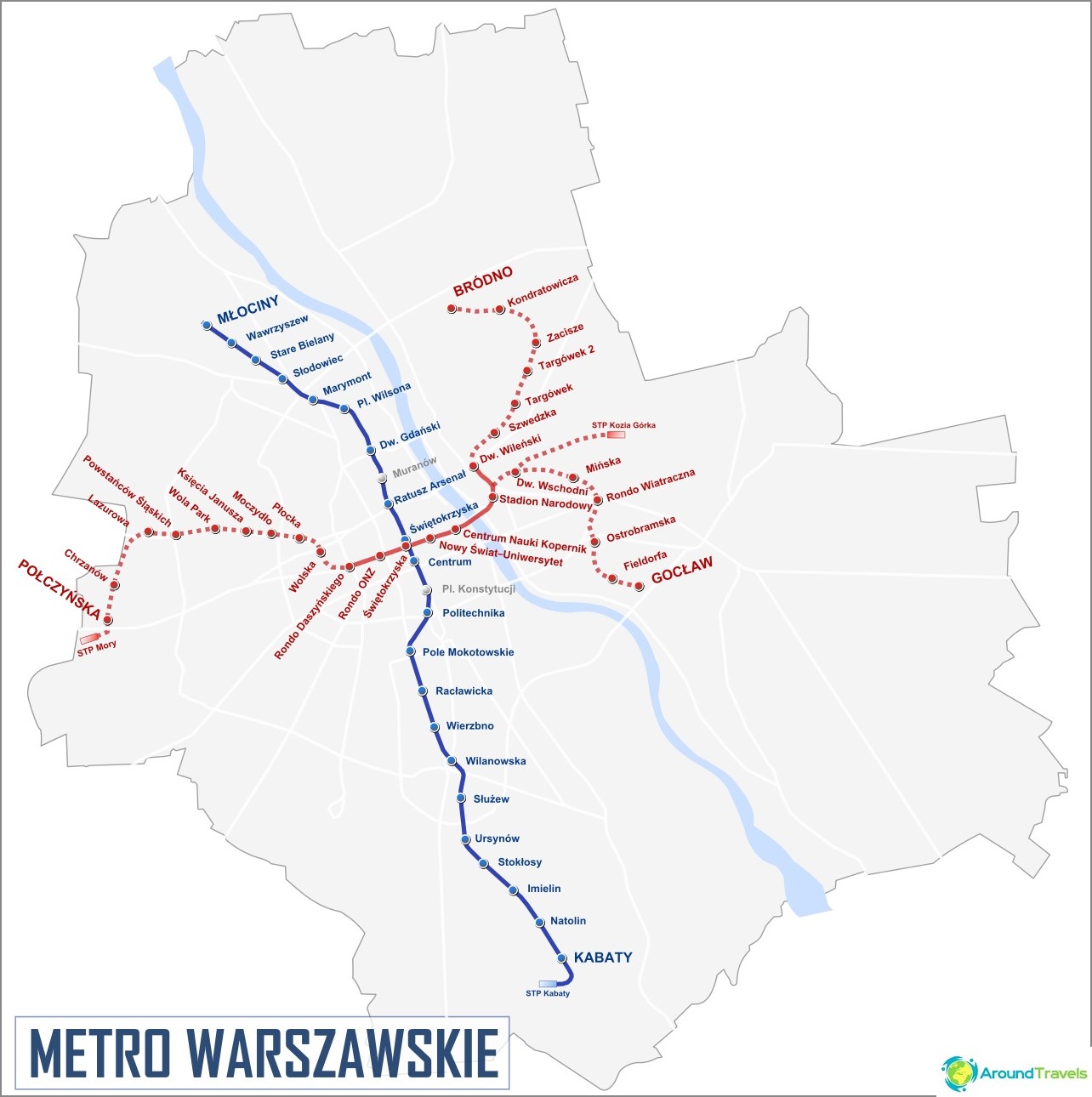 The tram is not as developed and dense,as a bus: 34 lines; trams do not look at every street. But it has its advantages. For example, the interval of movement is 5-10 minutes. Or - additional routes operating during peak hours and even days. Particularly interesting trams in the morning and evening, when the movement on highways is difficult. Unlike Russian traditions, cars do not travel along tram lines, so tram traffic is not a hindrance. Although there are traffic jams in Warsaw that they are not traffic jams after Moscow 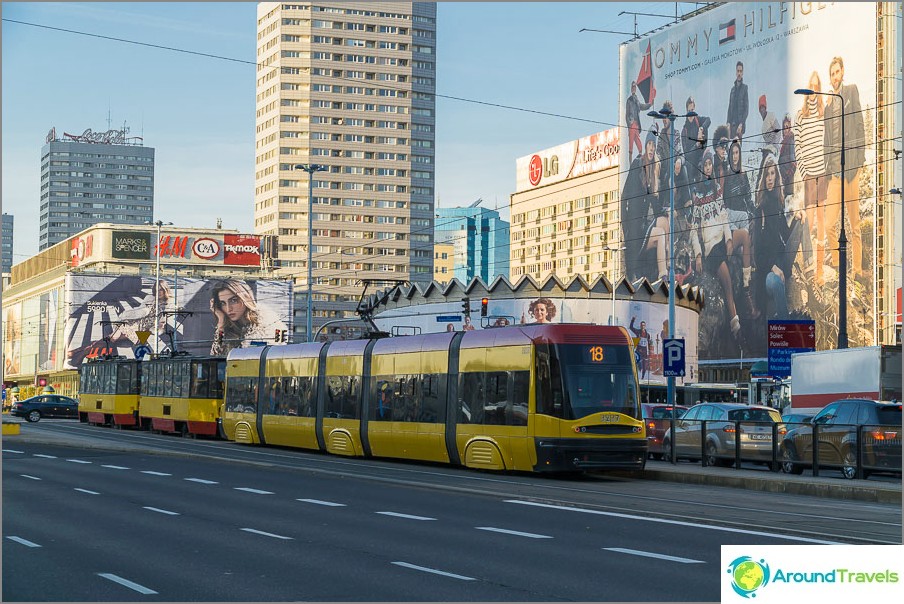 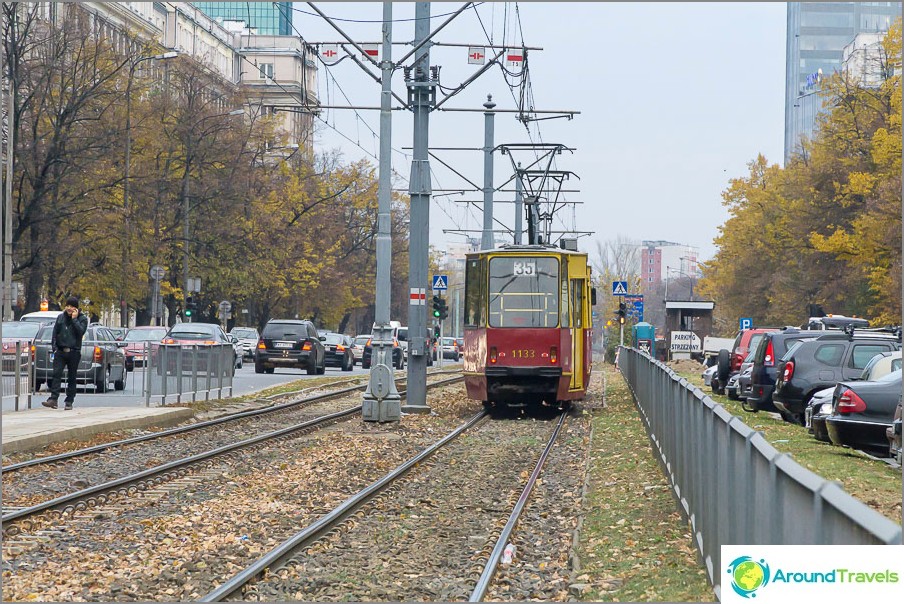 Public transport runs clearly on schedule. At the bus and tram stops always hangs the schedule of a route. It was literally just when there was a bus waiting, but it was not there, but it wasn’t even that day, or the route changed, or something else.

From the minuses it is worth saying that the buses are already painfully frisky, suddenly take off, stop abruptly. On the one hand, you quickly reach the place, on the other hand, you feel like wood.

Cycle paths and well-established bike rental system -A separate interesting topic. I didn’t find out in detail, but there are rental stations all over the central part of the city, where you can take a bike in one place and give it away in another. Conveniently! Payment is only, unfortunately, not a bank card, but a little different. But if there is a local sim card, then you can pay with its balance. In general, it seemed to me that there are a lot of cyclists in the city, and, moreover, they ride quite ordinary urban and inexpensive models.

In addition to bicycles there is also TaxiFor those who, on the contrary, want to quickly. 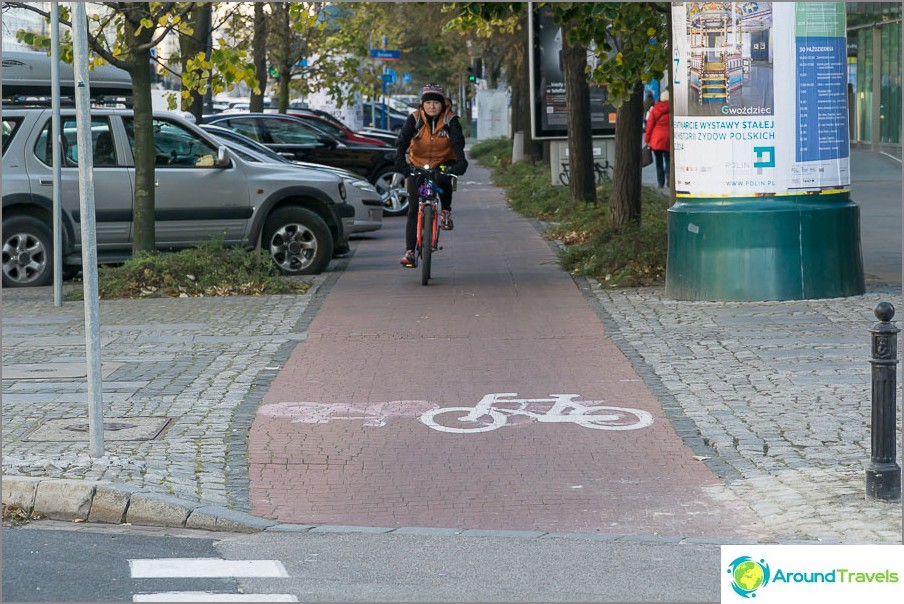 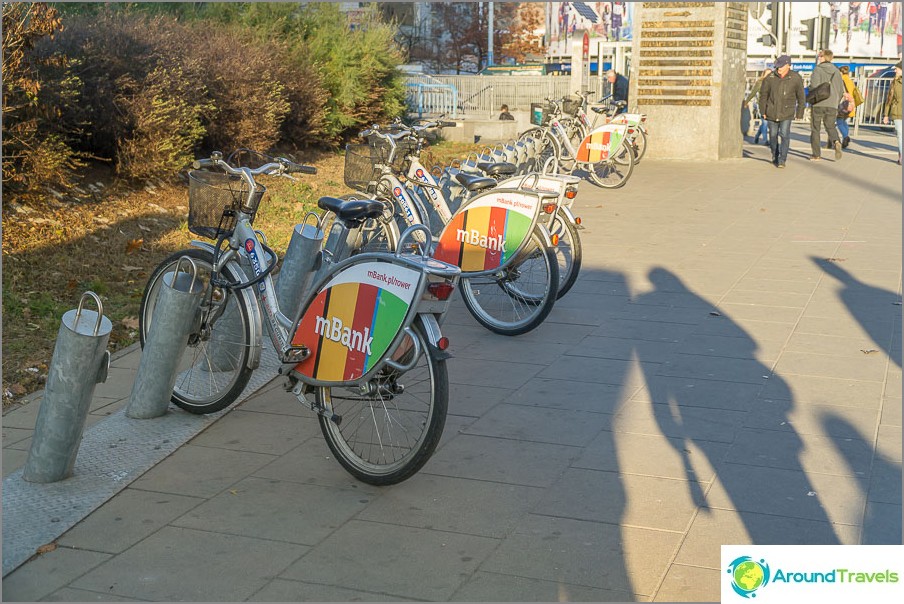 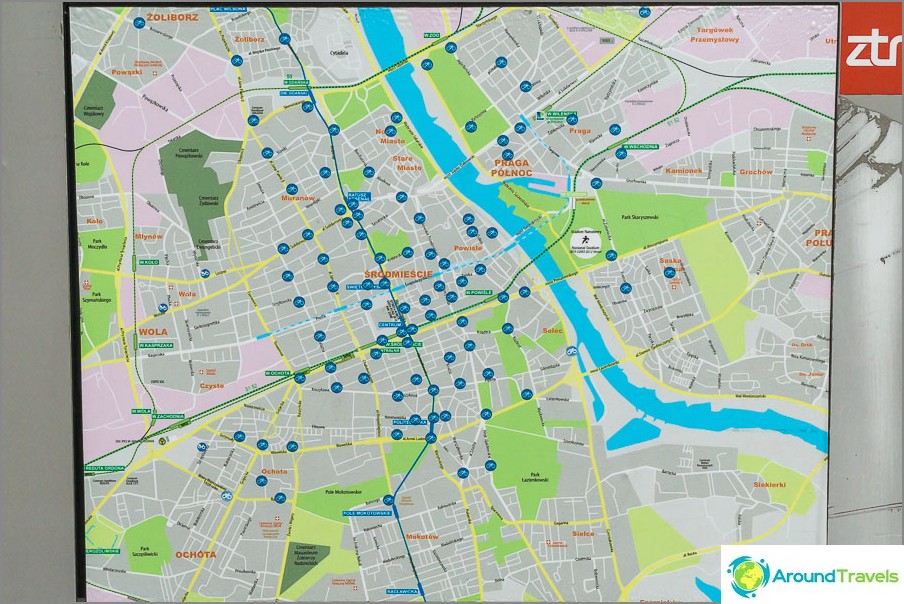 There are also a number of convenient nuances that can not beMark. A ticket for travel - one for all modes of transport, as in Singapore or Budapest, and more recently in Moscow. It is sold everywhere: in automatic machines at subway stations and near bus stops, in Ruch print kiosks and ordinary, inside the bus in the machine, and also at the tram / bus driver.

Automatic at the bus stop 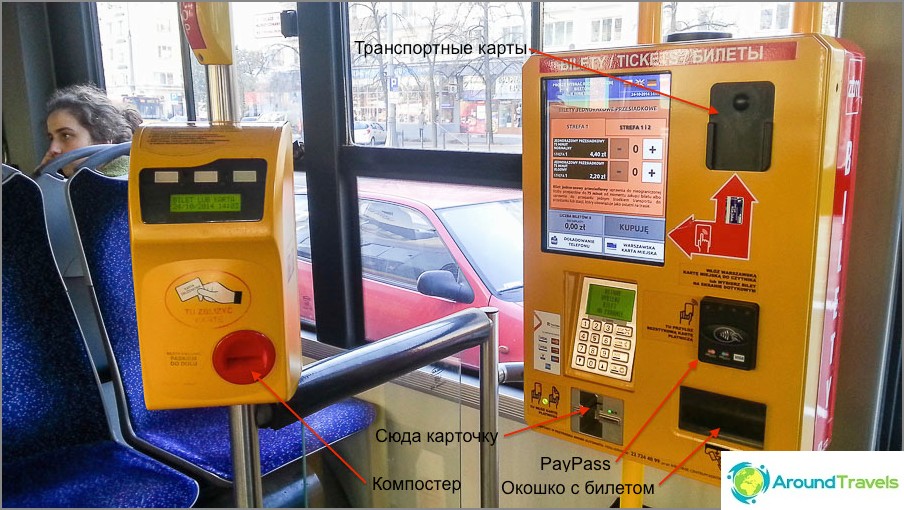 Car for buying tickets inside the bus 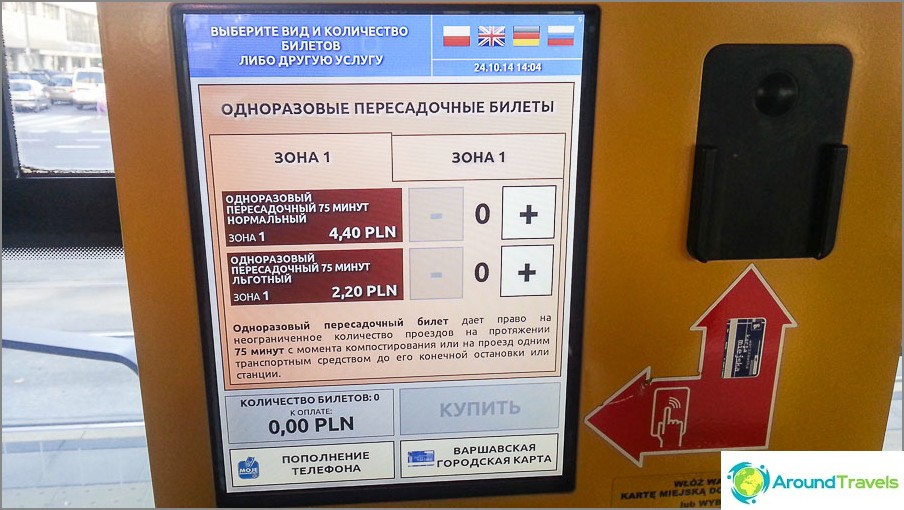 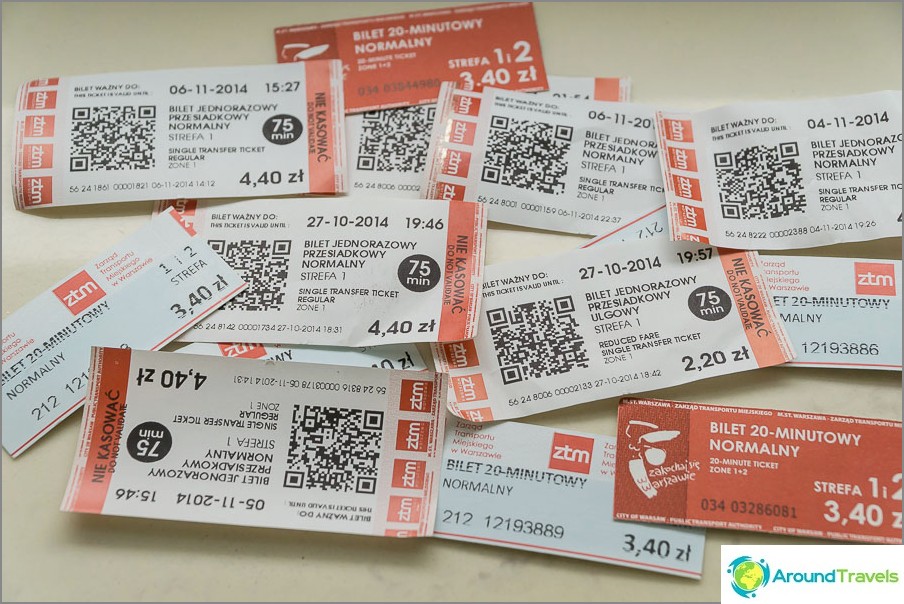 Tickets for public transport in Warsaw

I really liked the opportunity to buy tickets by credit card, very convenient. Ran into the bus and then you automatic. No trifles need to be with you, nor to the kiosk to run on the road.

Also I am delighted with the transport application(version for Android, version for iPhone). This is just a mega-mega convenient for a person who does not know the city. You can completely relax and do not prepare for a trip to Warsaw, studying routes and schedules. Everything is in the application, you need only the Internet in the phone (3G Internet in Warsaw) and knowing the destination address, well, or where it is on the map. I used the cards, as I have a much better memory for them than for addresses.

The application is simple, I think it will not be difficult to understand.

In addition to Yakdoyad (or Yakdoyade), there is also the official bus schedule on the official website, where you can also build a trip route and download the application for your phone.

P.S. The article does not pretend to all the nuances, as it used mainly by buses and only in the first zone.

Food prices in Poland (Warsaw) in ...

Help make the transition from windows to mac ...