Unique Volkonsky Dolmen in Lazarevsky - photos and how to get there

I have one of the most interesting periods in my life connected with the Volkonsky dolmen. Then, for example, I lived in a tent for 3 months, and generally changed the direction of life andprofessional activity. The dolmen has absolutely nothing to do with it, but when I find myself in such places, nostalgia and memories roll straight at me like a wave. So it was this time when I came to him, already quite different, quite different from what I was at our previous meeting.

It so happened that I drew a small trip along the Black Sea coastand since I have long wanted to do normalphotos of the Volkonsky dolmen, and just walk along the beautiful Volkonsky gorge, then, of course, I taxied to him. Good parking is located near the road, in any case, I drove it, and go there very close.

Morning, right after the rain. The sun just broke through the trees, the gorge, the sun comes here later than on the coast. Slight fog. Everything is wet around and from being bright bright, such a deep rich green color around. Slippery. The air temperature is pleasant, cool, but warm when moving, just for walking. It is a massive dolmen, a giant carved into the rock. It is unique, there are no more of those on the coast, so that it is made entirely from a piece of rock. And there are only a few of them in the world. Imagine, someone spent a decent amount of time, and with some obscure purpose for us created this structure. Scientists have not come to a common opinion, why they were built, and almost every year a new version is put forward. 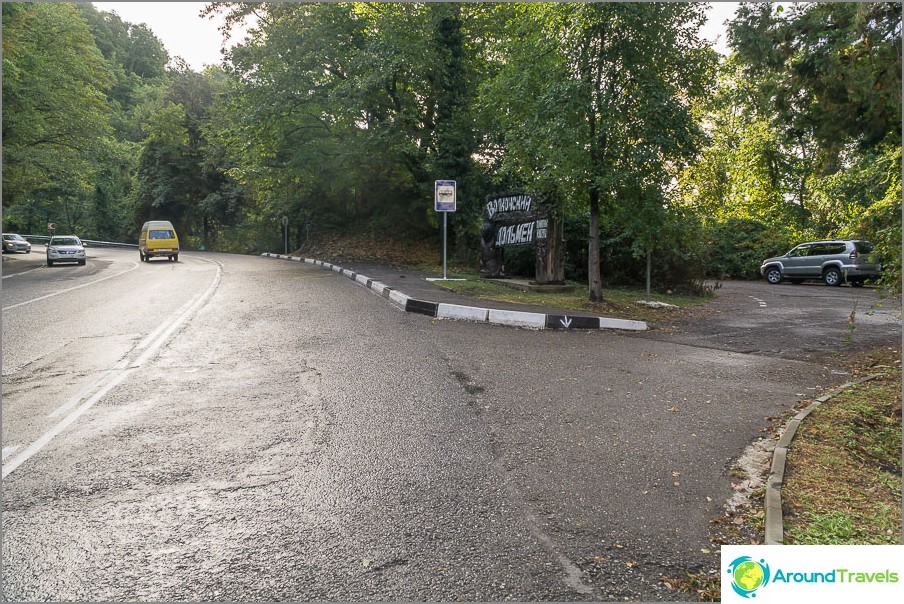 Parking Volkonosky dolmen near the road 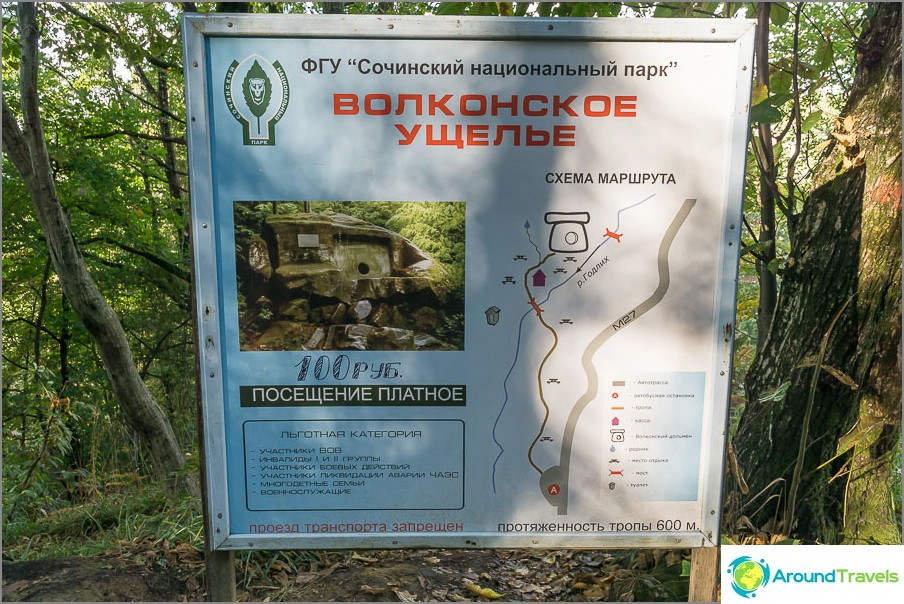 The route scheme is only 600 meters. 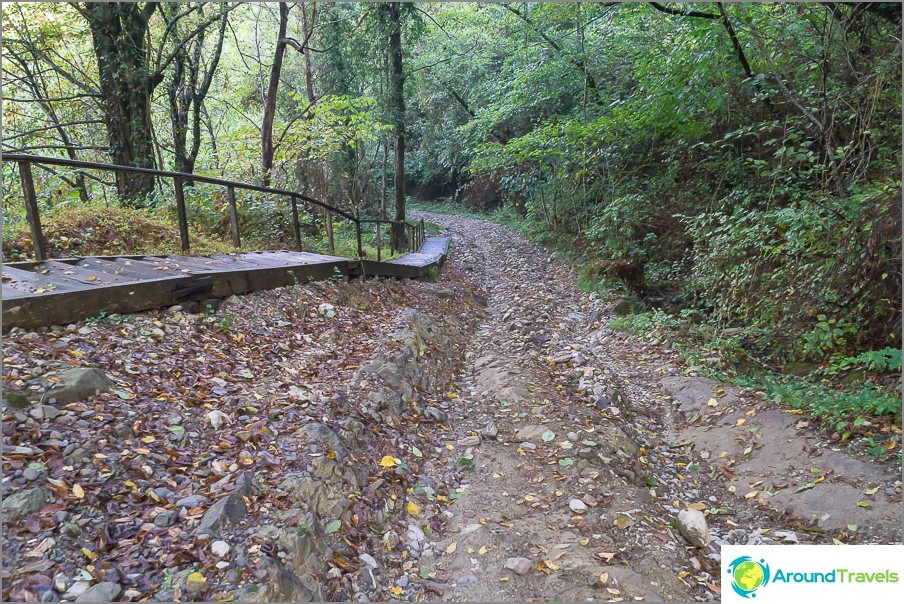 The road from the parking lot to the dolmen 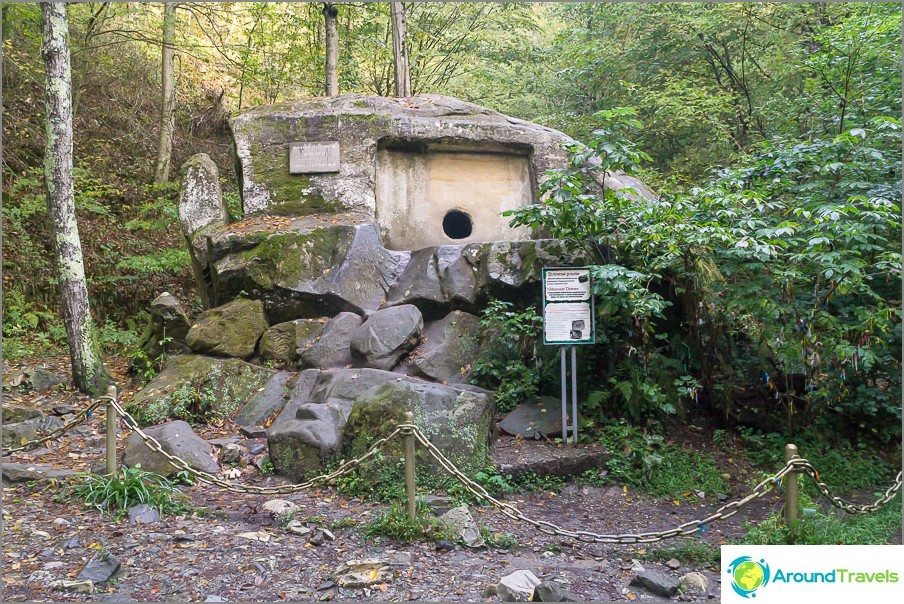 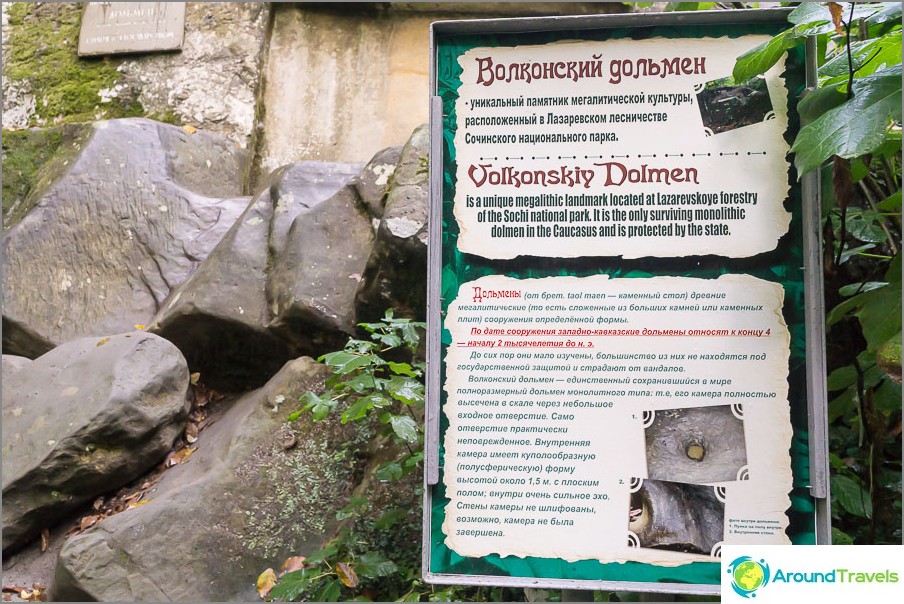 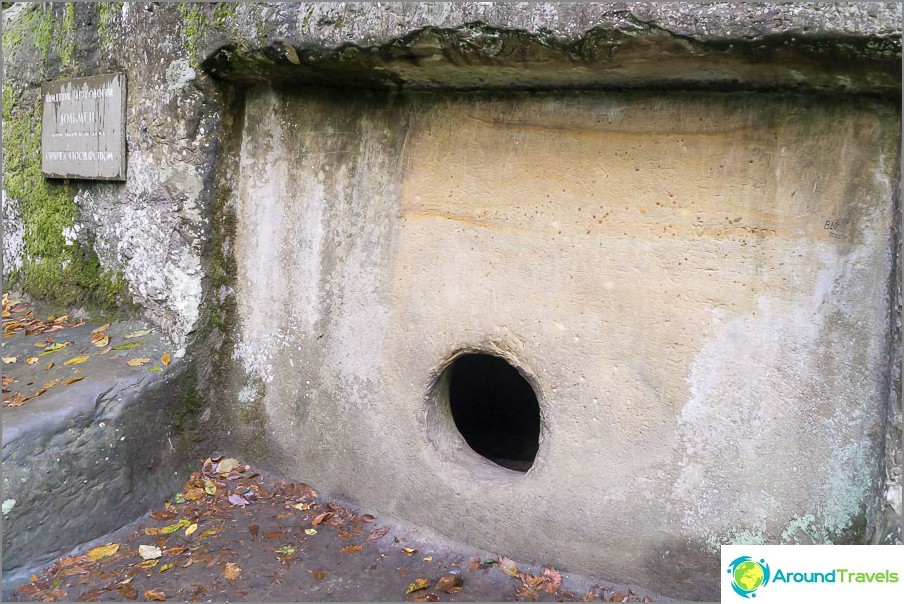 Not recommended, but you can climb the dolmen itself. 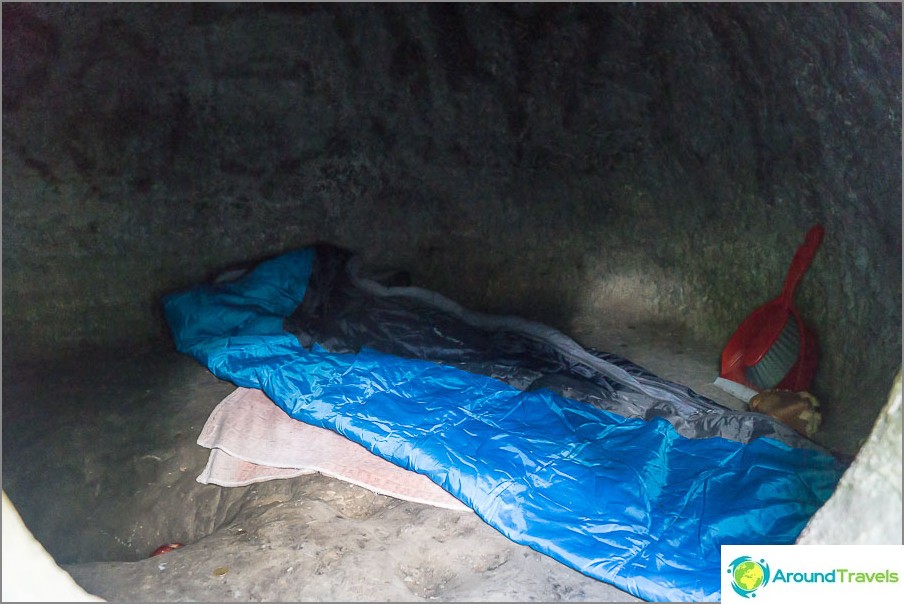 Someone spends the night inside 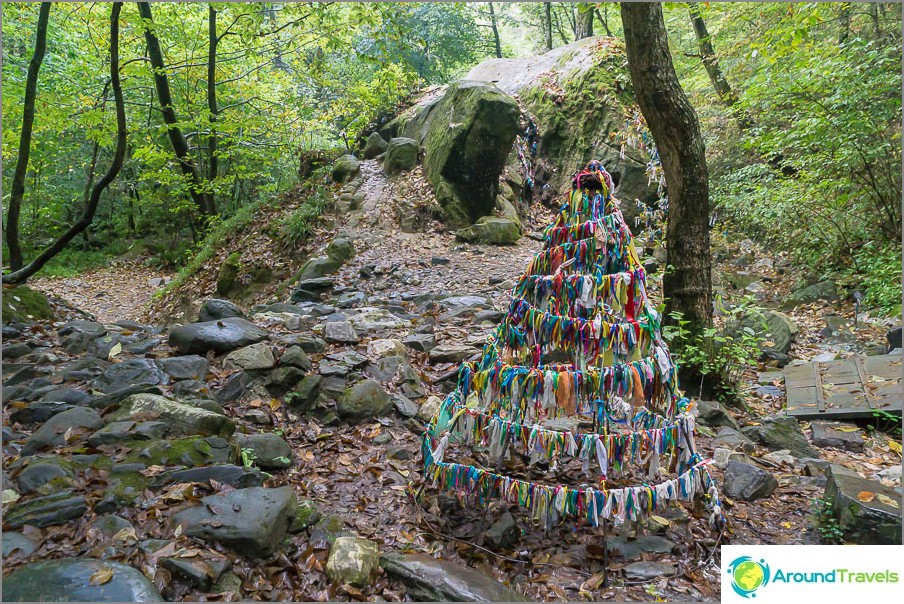 Design for lovers of ribbons, in the background a dolmen

If you try to plunge into the atmosphere of the place, thenYou can nafantize yourself a lot of things, talk to the dolmen and his spirit, talk to your inner self, turn to God and to higher powers, depending on what and whom you believe in, and whether you believe at all.

I had thought I would not meet anyone, but one ofsouvenir shops prepared for opening. It's strange, it's already October, the season is over, did someone come, and besides at 8 in the morning. Then he met his grandfather, he came to a hydrogen sulfide source for water. He told that before all the local people drank this water without restriction, but now they put up tablets everywhere, that, they say, they should not be drunk often, they should be dosed. It tastes like stale eggs every day, I definitely wouldn't drink it, but it's worth trying once, you will know what it is. Like water, and the receptors say that the eggs. 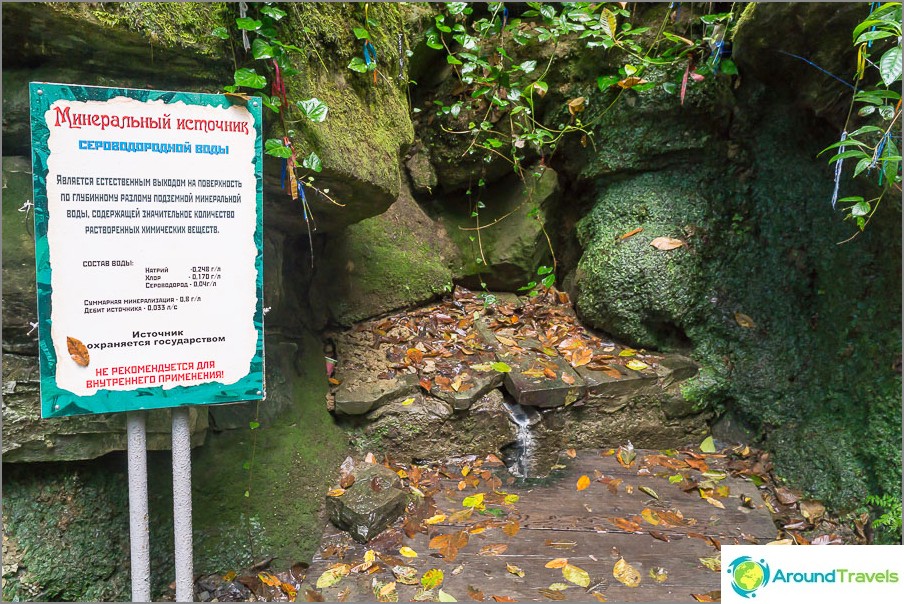 You can go further along the gorge. At the end of the path you will see two “Two Brothers” stones leaning against each other. Nothing special, but 5-10 minutes of walking in the woods are good for health. In addition, the path itself is beautiful, roots underfoot, stones, a small cliff. 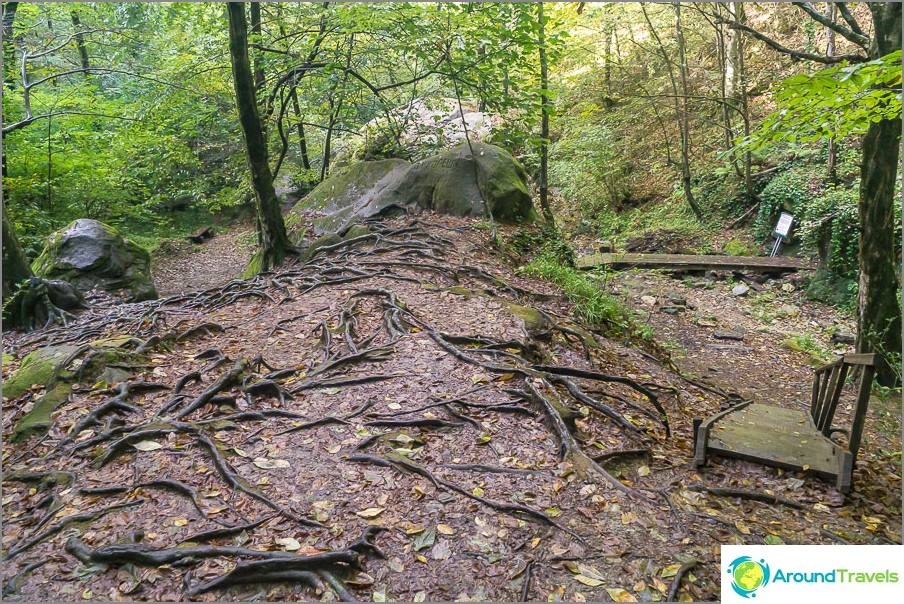 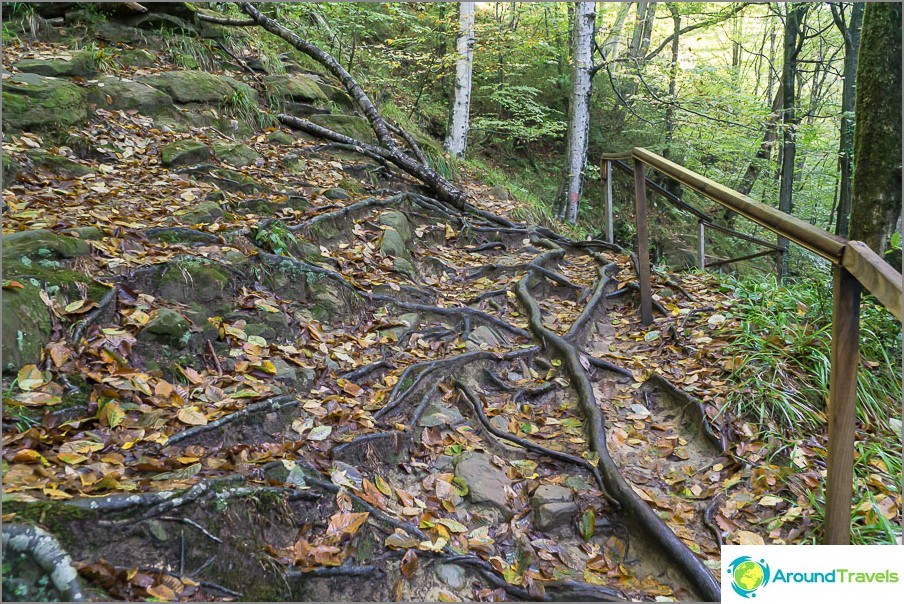 The path along the gorge, solid roots 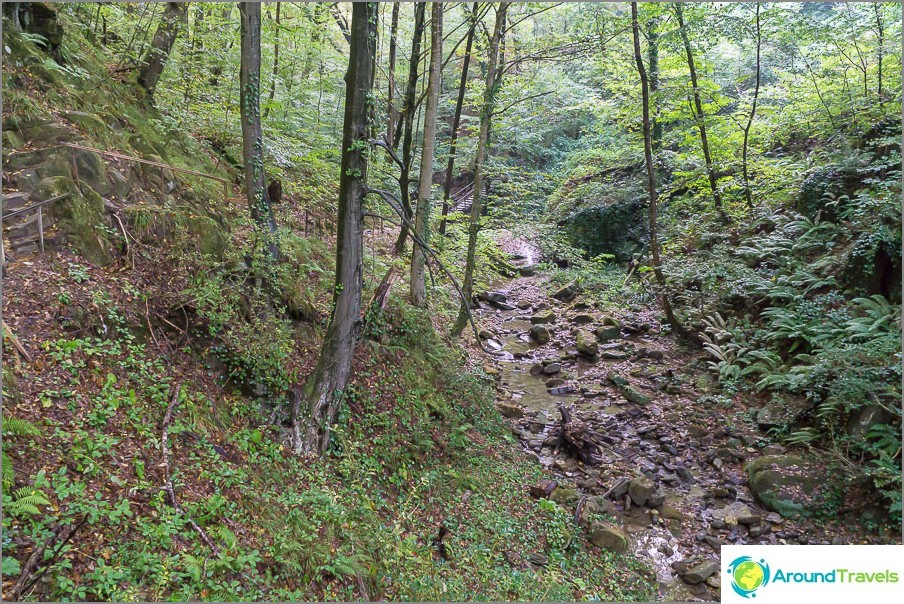 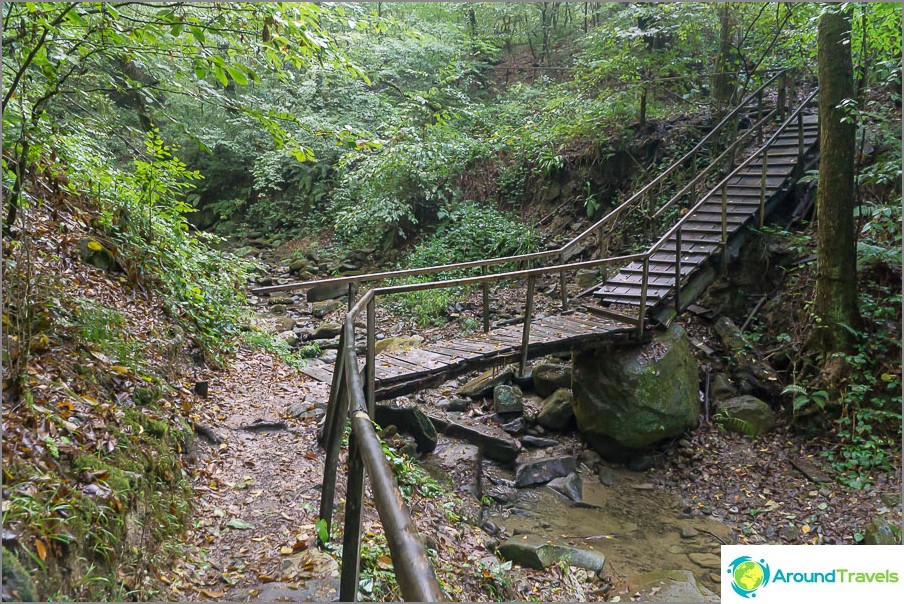 Bridge over the river 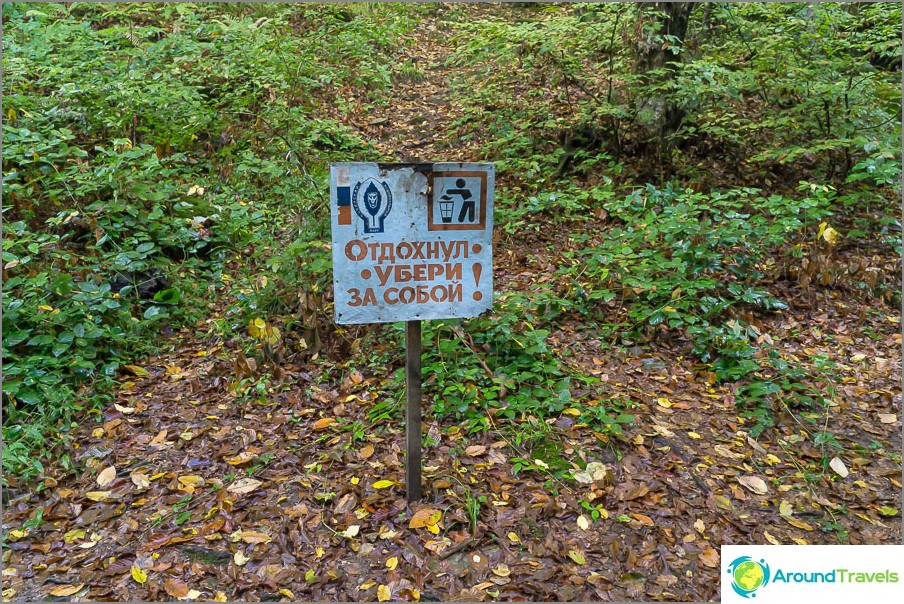 The right signs, but does anyone pay attention 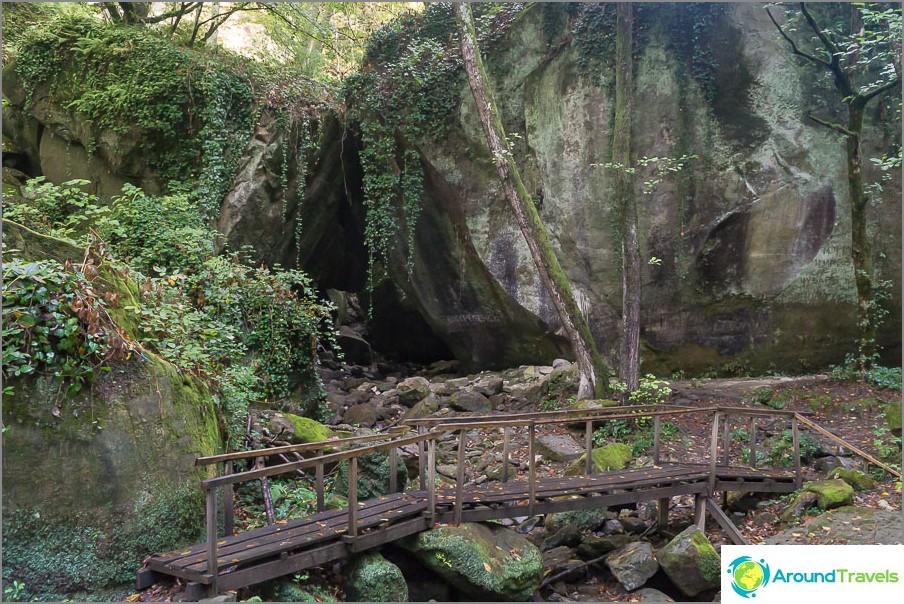 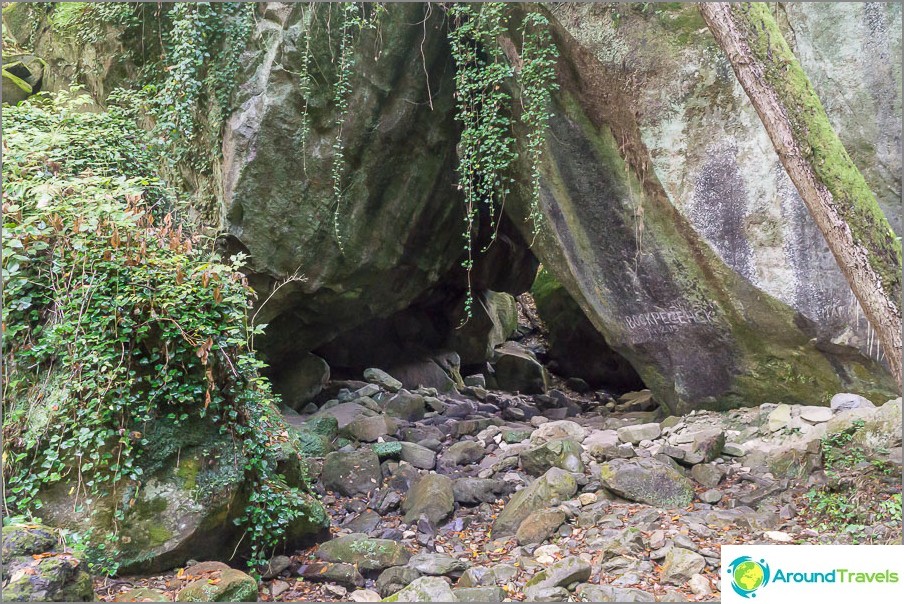 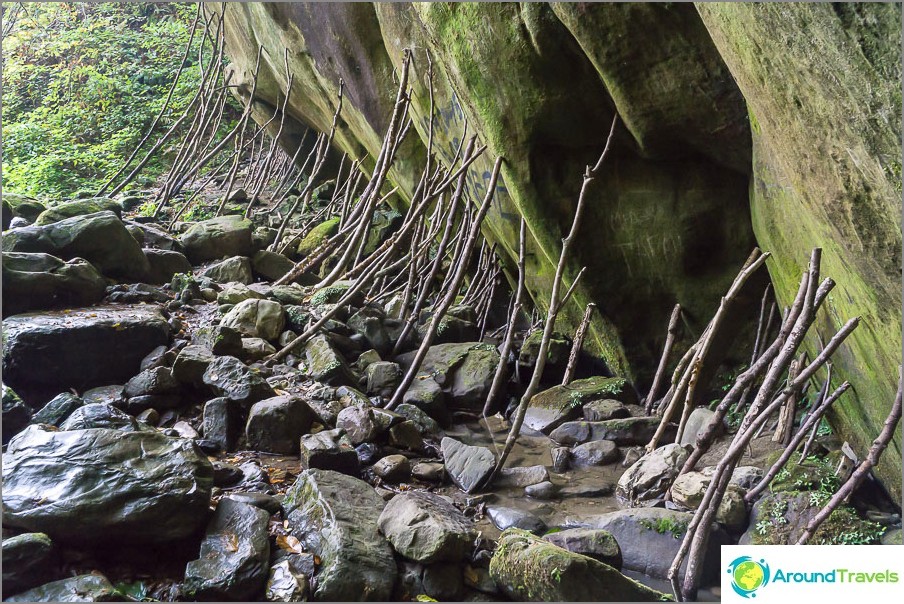 The tradition to prop up stones with sticks came to us from abroad.

What else to see in Lazarevskoye and surroundings

Admission is 100 rubles, children under 10 are free. If you arrive in the morning before 8-9 in the morning and in the evening after 18 hours, you can also usually go for free.

A visit to the dolmen and rocks takes no more than 1 hour. And if you just go look at the dolmen and go back to the parking lot, then 20-30 minutes is enough.

Map and how to get

If you are by car, it's very easy to get there. You drive along the highway until you see a big inscription “Volkonsky Dolmen”, this is parking. On the map below you can see where it is located, almost immediately after Lazarevsky, if you go in the direction of Sochi.

Public transport is also possible,the easiest way is by train, you must get off at Volkonskaya station, it is the second after Lazarevsky. And then walk up the village, there is one main road. There will be a couple of branches, but ask any local where the dolmen will be. From the railway station to go somewhere for 20 minutes.

Volkonsky dolmen
Monolith. One of the few remaining dolmens, carved entirely in the rock. Near the hydrogen sulfide spring and a beautiful gorge with rock Two Brothers. Read about dolmen more.

Monolith. One of the few remaining dolmens, carved entirely in the rock. Near the hydrogen sulfide spring and a beautiful gorge with rock Two Brothers. Read more about dolmen.

What to see in Anapa and where to go ...