We continue the winter anti-Thai theme and the theme of travel in Russia. Last time, Acne told about Yakutsk and Lena Pillars. Really want impressionsit is not necessary to go to the south, you can go, on the contrary, to the edge of permafrost, where temperatures are so low that my imagination cannot even imagine them. Read another post from Vitalik about the road to the Oimyakon cold pole in Yakutia, about the coldest place in Russia, and possibly on the whole earth after Antarctica. True, Oymyakon fights for this title with Verkhoyansk, and scientists can not come to a common opinion.

About 1000 kilometers between Yakutsk and Oymyakonway to the northeast. It passes through a deserted forest-tundra, multi-kilometer ice crossings through Lena and Aldan, mountain serpentines of the Chersky ridge, and most importantly - fifty, and if lucky, then sixty-degree frost. The road clearly promised to be difficult, and therefore I decided to drive it entirely only once - on the way back (how to get there). And I planned to get to Oimyakon by plane through the administrative center of Oimyakonsky district, the city of Ust-Ner, and from there I had to travel 400 kilometers on a ride - thus, having packed in one day.

The two-hour flight from Yakutsk to Ust-Nehru deservesenter the Guinness Book of Records, as the brazenest rip-off customers in the history of civil aviation. A one-way ticket to the Polar Airlines cost me more than a round-trip flight from Moscow to Yakutsk, despite the fact that I also got it through a promotion. To imagine the flight conditions, it is enough to understand that it was carried out on an AN-24 aircraft, which was discontinued back in 1979. From the inside, he looked like a real pepelats, the fittings were sticking out of the gnawed seats, persistently digging into the ass, washing in the toilet did not work (the ad reported that it should not be in winter), and sound insulation seemed to be absent in principle. It remained to admire the mountainous landscapes outside the window, since the plane flew quite low. 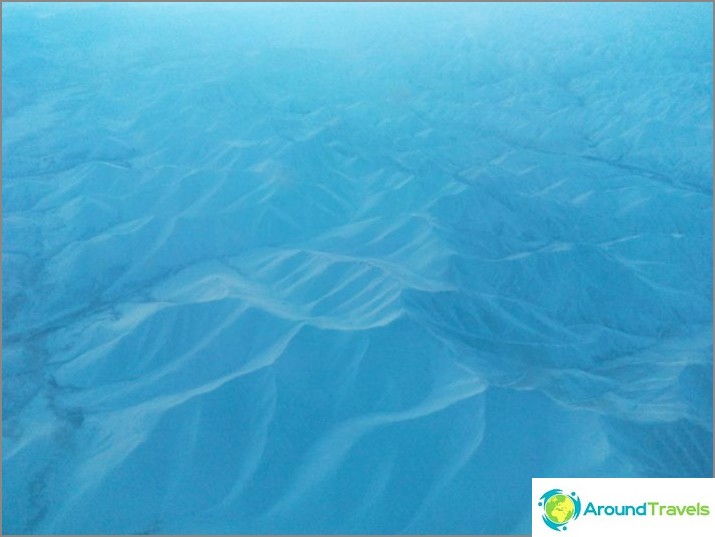 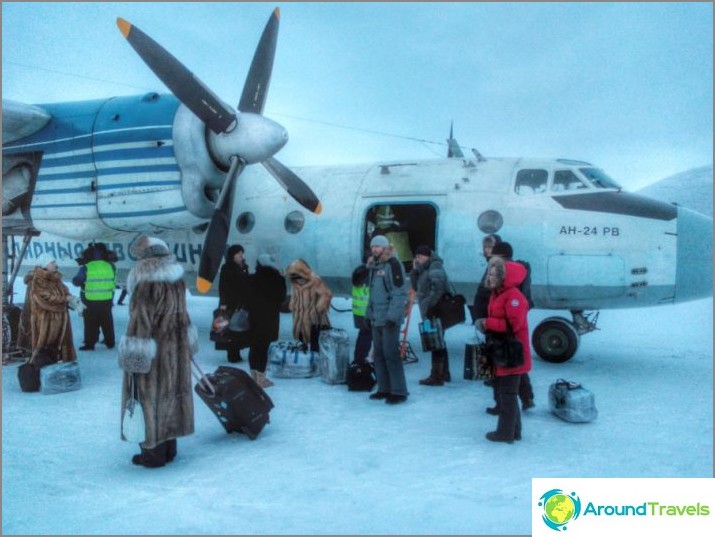 However, there was a service on board thatIt consisted in the fact that it was possible to get a choice of orange or tomato juice, and from the hands of the co-pilot. And passengers with baggage had to take it from the baggage compartment on their own, and also carry it through the icy canvas of the airport.
Well, yes, not for the comfort you need to go to the PoleCold Upon arrival, I called the number of the dispatcher I found in advance and arranged a ride. The driver turned out to be Maxim, who was going to go to Oymyakon right now. Only here ... we literally reached the nearest gas station, where it turned out that our Range Rover, apparently unable to withstand the overloads, cracked and broke the rear suspension. What to do? Going on a long journey with such a breakdown was tantamount to suicide. We needed repair, and with welding.

Find welding at the end of the January holidays atUst-Nere was not a trivial matter. In the only auto repair shop, there was no welder, who knows where. Well, the city is small, everyone knows each other, and after several calls, they managed to find a free master. A warm garage for repair was kindly provided by the local gays (the case when they can be thanked). The guys had a few hours of work, and I had time to walk around the city.

Ust-Nera - a city founded in 1937by the forces of the Gulag prisoners, can be called an illustration of the modern economic model of Russia, brought to perfection. The environs of the city are rich in gold, antimony and other precious metals. All this is actively mined with the participation of local residents, but at the same time the city itself looks like a shack of a gradually descending drunk in which mess and desolation reigns. Entire quarters in the city are abandoned, some wooden houses still show signs of life, but it is obvious that the days of this life are numbered. Around the trash and stray dogs. 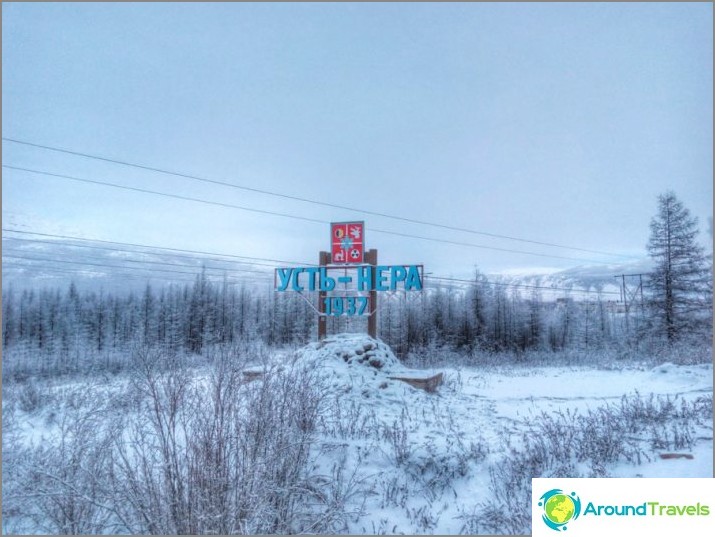 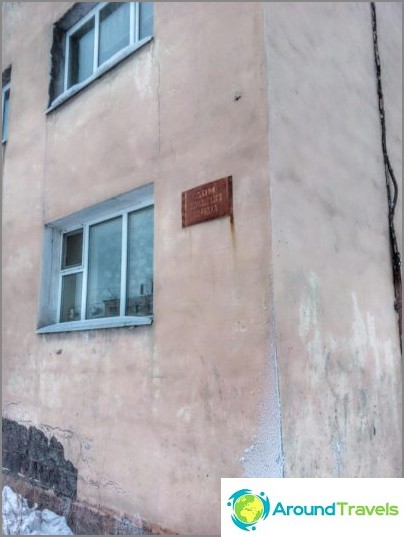 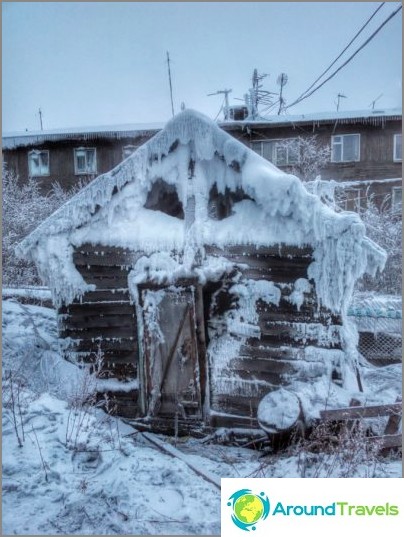 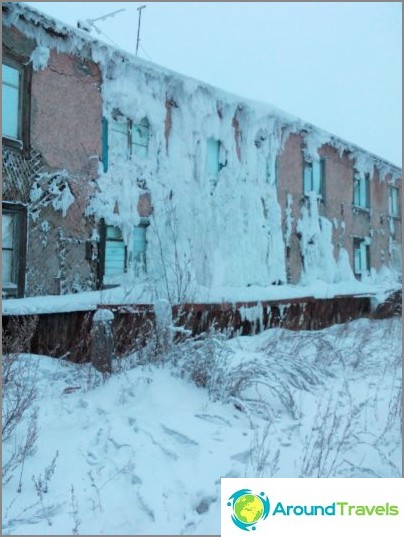 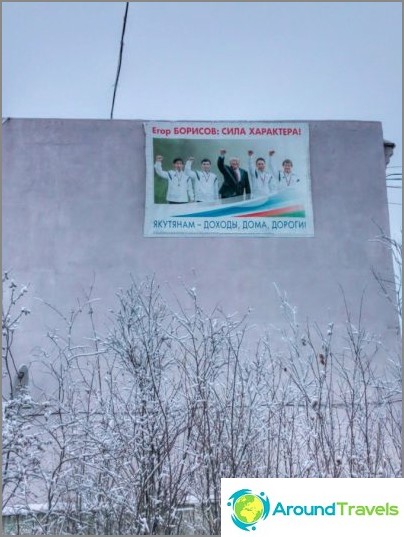 More struck not even poverty (expensive cars onthe streets, by the way, are also present), exactly how much is neglected. The locals obviously do not want to make their lives more beautiful and tidy, apparently because they do not see a future in it. There is only one cafe in the city, and that is the sickening of Soviet times. The club and shopping malls also leave a depressing impression. This happens because the extraction of gold and other metals is fully controlled by the mafia, consisting of people from all over the CIS. These people clearly do not associate their lives with extreme frosts, and this attitude of “those who have power” is transferred to all other residents. 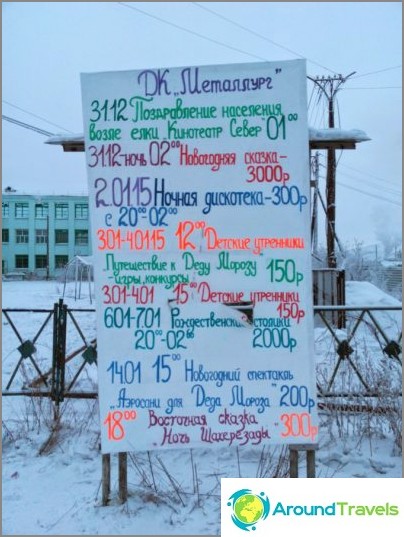 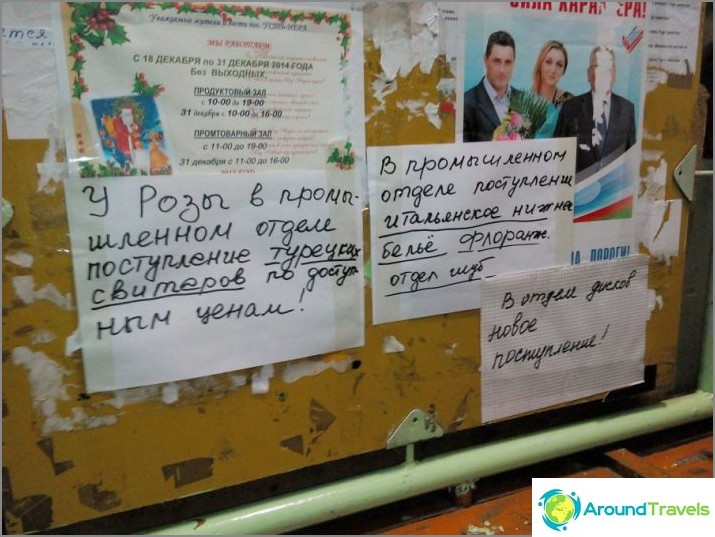 However, local in communication even with the appearance andunfriendly, but very friendly. For example, the kid, whom I asked about the road to the monument to victims of repression, in a few minutes caught up with me in his car and offered a ride - obviously, he did not want me to walk two kilometers in the cold. The monument itself, by the way, is officially dedicated to the builders of the Kolyma highway, and about prisoners of the Gulag it is mentioned, as it were, in passing — apparently, for political correctness. 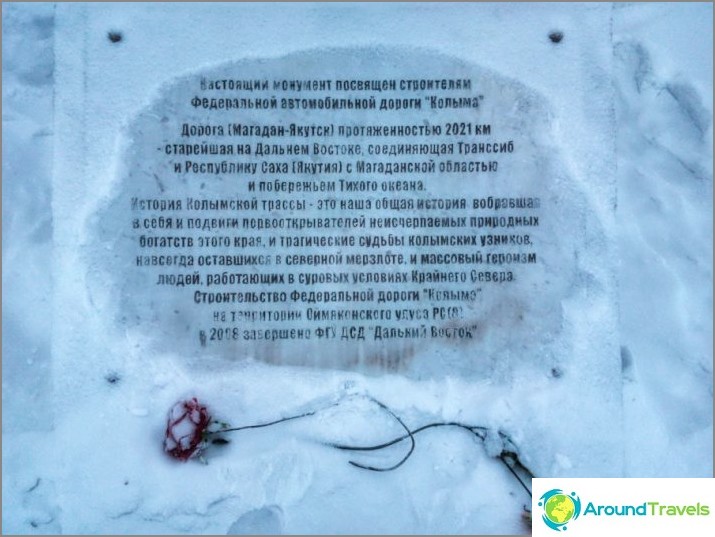 When I returned, the repair was almost complete,and soon we finally went to Oymyakon. By this time it was dark (and it got dark in January here at four o'clock in the afternoon), and we spent the next eight hours of the way talking, only occasionally getting out of the car "on business."

By the way, the feeling of a two-minute outing in the middle“Kolyma” tracks are truly cosmic and worth it to go there at least once. You are standing in front of a dark precipice, above you billions of stars, beneath you somewhere down there like an endless crowd of ugly larchs bent under the weight of frost. (It’s a pity, all this cannot be photographed on the phone.) The air is so dry that even without outerwear you do not feel cold at first, but after about half a minute all this outer space begins to gnaw warmth out of you, and you begin to understand what it means the metaphor of the "whisper of stars", which locals call the bitter cold. 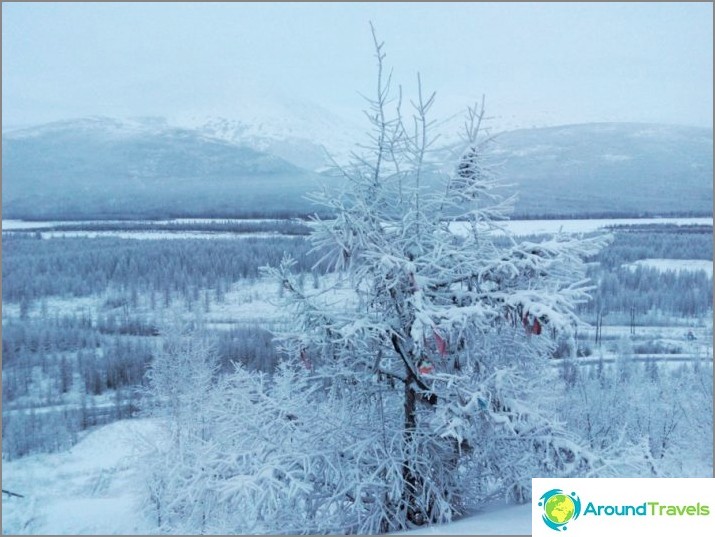 We drove along the perfect snow-white road, MaximHe talked about his hunting trips and sucked red wine from a 1.5-liter bottle, eating Magadan capelin. “Otherwise such distances cannot be mastered,” he says. Some people need to sleep on the way, and some - like me - do not have much time, so a couple sips of wine or brandy help them to cheer up. Anyway, there are gays only in Ust-Nera. ”Toward the end of the path, the bottle was empty, which, by the way, had no effect on the rather neat driving style. 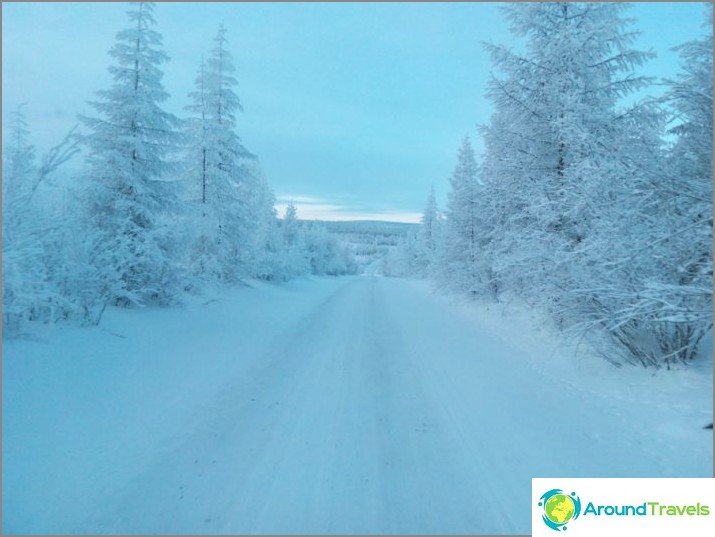 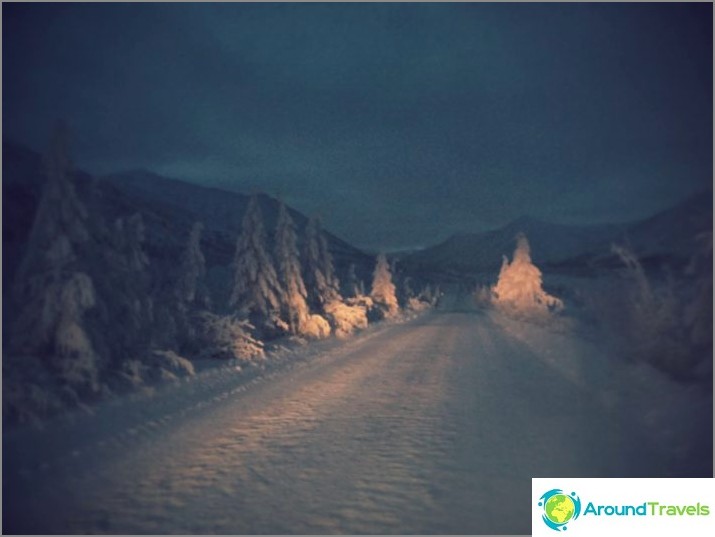 "But if the car is dead, then how is itwith a layer of frost to find dry firewood in order to quickly make a fire? ”- I ask. “Yes, elementary,” replies Max. Look, for example, dry larch, but not, ”he shows me two identical white figures on the side of the road. Half an hour later we drove past a huge dying fire. Caught in trouble, obviously, has already managed to evacuate. “See, I told you, it's just that!” Max calms down.

After another two hours, we drove to the fork.- the only place where you can refuel gasoline. Then the road went to the right - to Yakutsk, and to the left - to our Oymyakon. Gas station and cafe with the warming name “Cuba” give the impression of a real polar station. And the food - extremely simple - apparently due to the self-mobilizing organism seems surprisingly tasty. 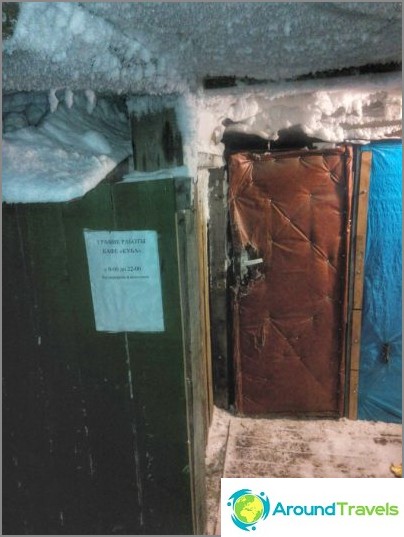 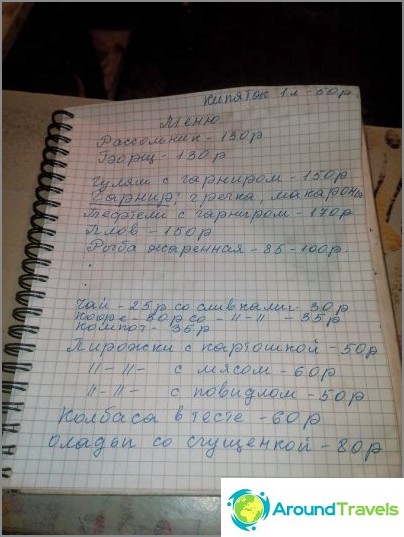 After another couple of hours we drove up to the house.old Hutsul, or Gandalf, as young people call him for his gray beard. Hutsul, as Max told me, is a very epic character. He tells everyone that he is 73 years old, but the locals have unearthed, which is actually a few years less. Hutsul loves to share the details of his intimate life and boasts: “I can meet a woman for two hours without taking out!” Now he lives practically a hermit at a weather station, along with a young wife. He has several children, but the guardianship bodies were taken away, as parents cannot provide them with schooling. It’s a pity that Hutsul went off on a 20 km hike right before we arrived. As he explained to his wife, "beat someone's face." Not sure, though, that this was the incentive to get out of the house not at all on a warm January evening. My wife gave us tea by the light of a kerosene lamp (there is no electricity in the house), and we went on.

We arrived at the Oimyakon Valley very early after midnight. Max also called his friends from the gas station, and they left for me on the porch the keys to the guest house in the small village of Kuydusun ( where will stay). 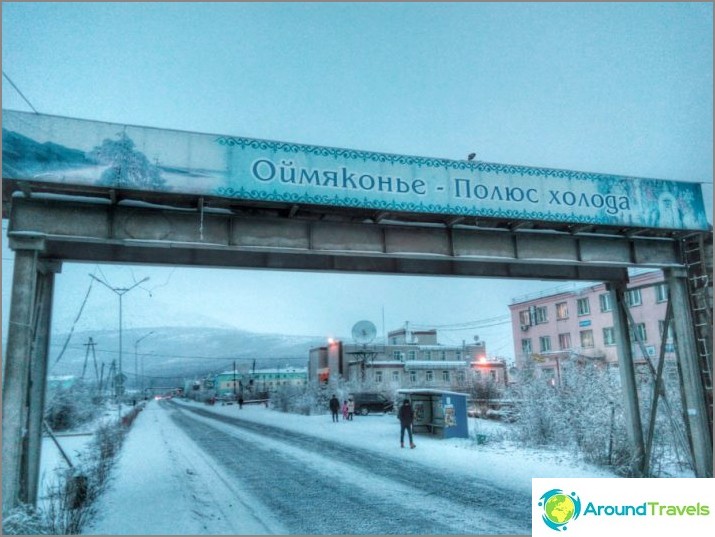 P.S. Acne does not blog, so here is the link to his Facebook account. In the next post you will find out 33 interesting facts about Oymyakonthe pole of the cold.

How did I get to China on the island ...