Wat Chalong in Phuket - the most popular temple on the island

Chaithararam Temple, also known as Wat Chalong, Phuket- beauty, which reached mass tourism. I don’t know about you, but for me it’s important that there is a feeling of exclusivity from visiting a Buddhist landmark, joining something special, sublime. It's like here in Russia sometimes you go to the temple - well, a shop-shop, all ads and schedules with price tags. And in the other you want to stand still and dissolve in the atmosphere, for the description of which there are not enough words. Wat Chalong, despite its age, scale, magnificence and amazing architecture, left an impression of a beautiful souvenir box. See - yes, interesting. Taking pictures, taking a walk around the territory is not bad either, but it will not be desirable to come back here again to push with tourists for a convenient angle and shadow.

Wat Chalong in Phuket (Wat Chalong), like meIt seems to be more of a tourist attraction than a Buddhist one. People are brought here in batches, which is not surprising - the temple is included in the packages of sightseeing tours of all existing travel agencies of Phuket. So that the visit does not turn into a usual crowd, and for discharging tourists for money, they are told about the procedure of visiting the temple, with all these candles and chopsticks with incense. Buy it there, set it on fire, stick it in here, give it a present, and if you bought a bag of live fish or fish food at the entrance, go have fun to the pond. And people like it and you can understand it - the same exotic.

Wat Chalong built by the canons of Buddhisttemple building: in a large area there are several buildings, each of which has its own name and purpose, which you will forget five minutes after they tell you about them. Unless, except for the crematorium and the main building, where, by the way, there is no access for mere mortals, and monks are not always allowed. What immediately catches the eye - the territory of Chalong Temple in Phuket is much more than what I used to see usually. Large spaces, spacious parking, good pavement, no puddles, dirt and even rubble. 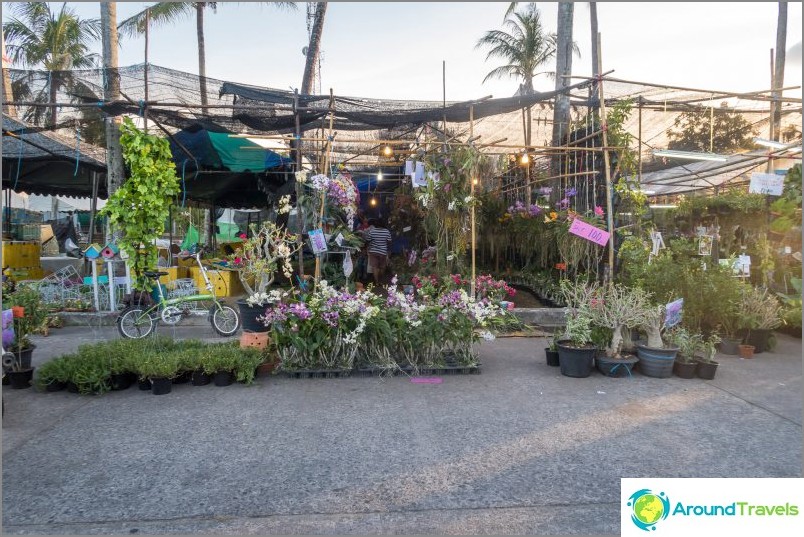 Before entering the market 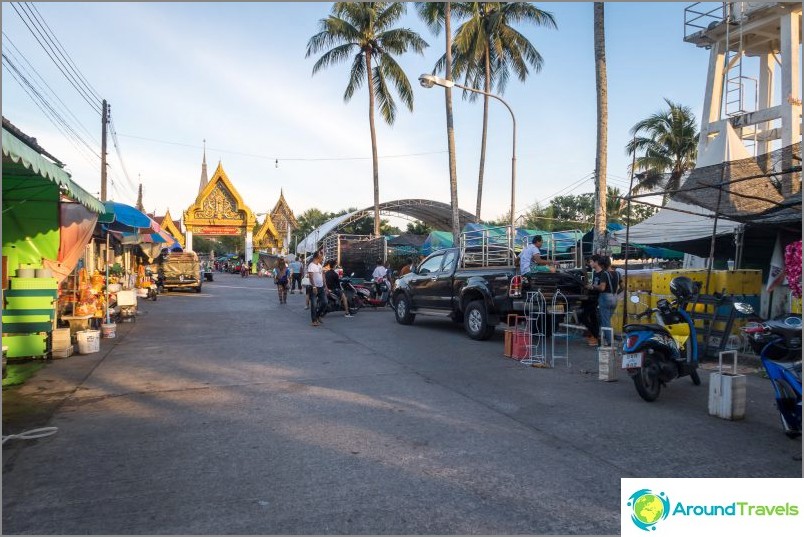 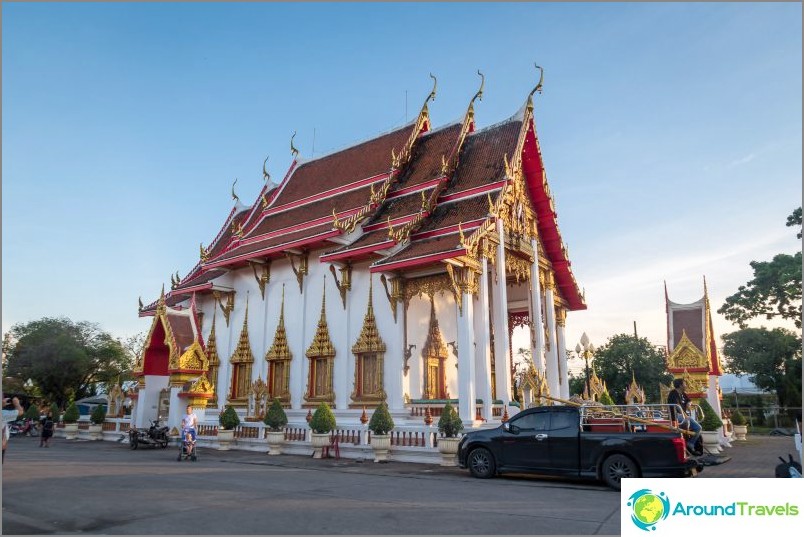 There are a lot of different buildings 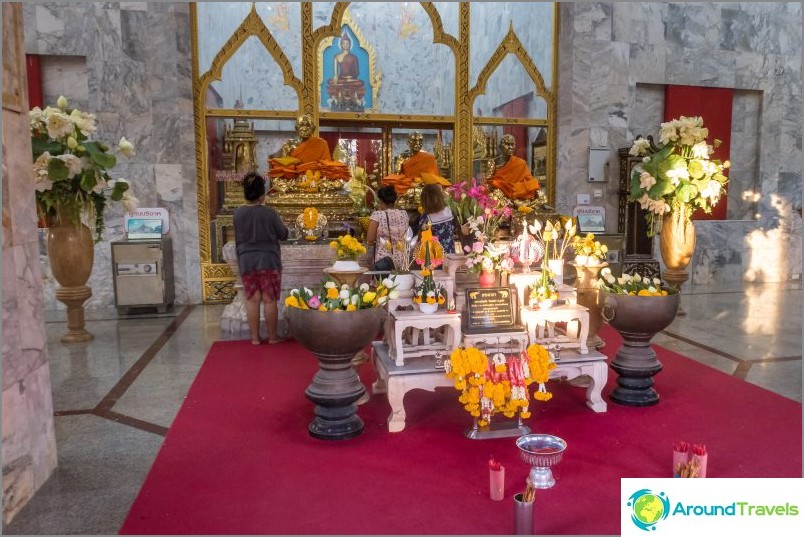 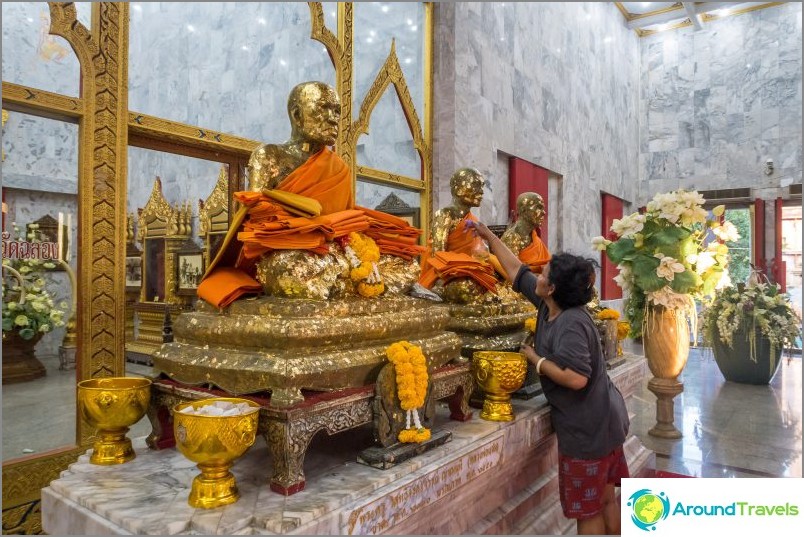 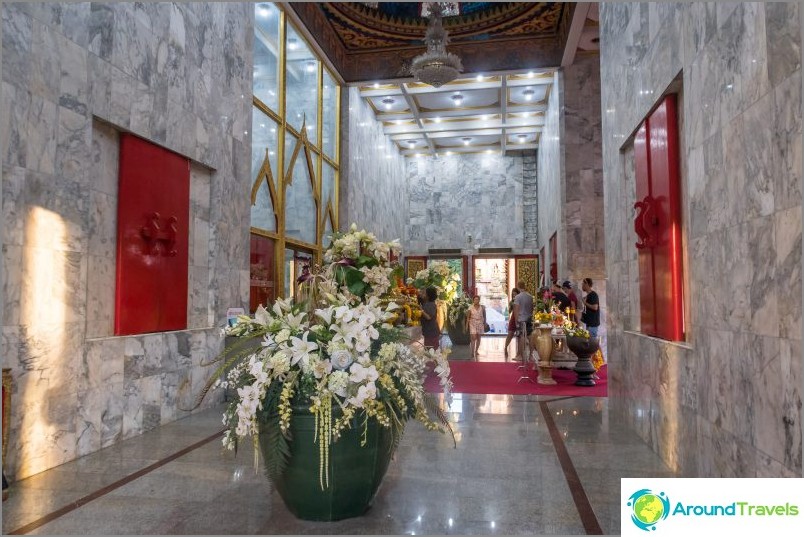 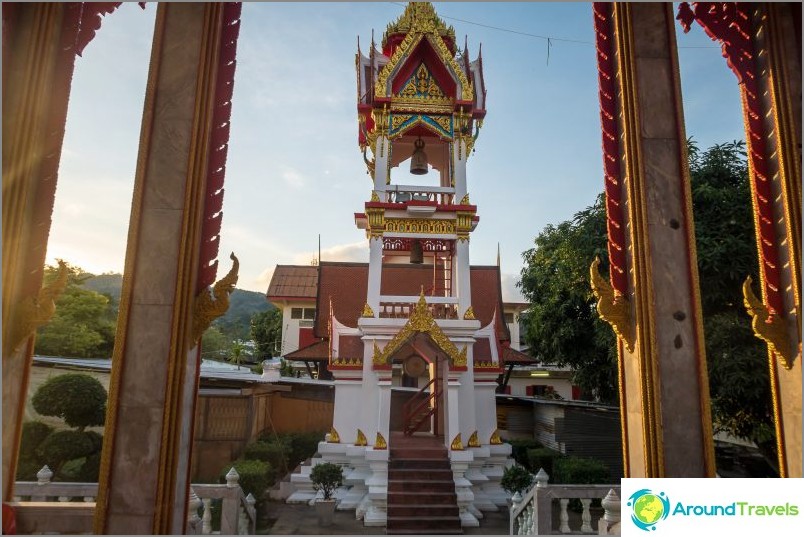 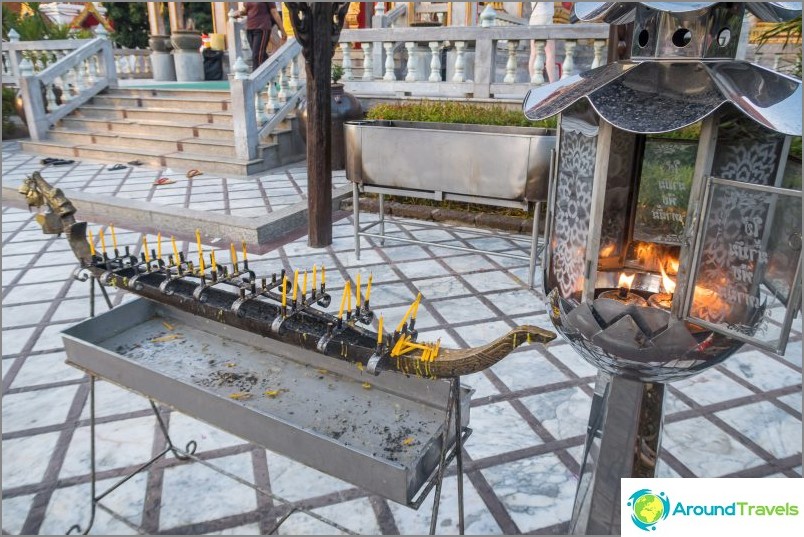 A brick oven is installed in the courtyard of Wat Chalong.rounded elongated shape - the traditional structure in any Chinese temple, which is usually still painted scary face. I used to think that they are needed for burning temple garbage, such as remnants of sticks and other tinsel, but it turns out they are intended to scare away evil spirits. The Chinese tradition, by the way, is to blow up firecrackers so that the spirits scatter.

In Chalong, especially for tourists (I think so, because in many other temples these stoves are usually silent), firecrackers burn in the furnace all day with a certain interval. 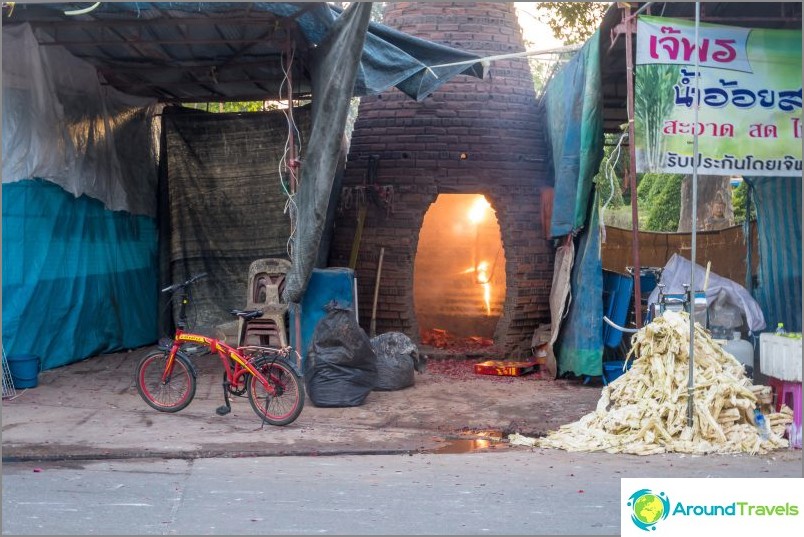 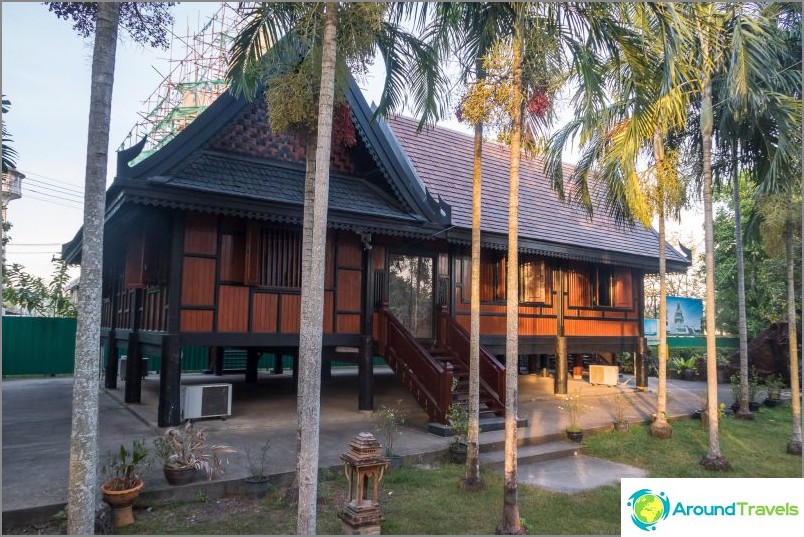 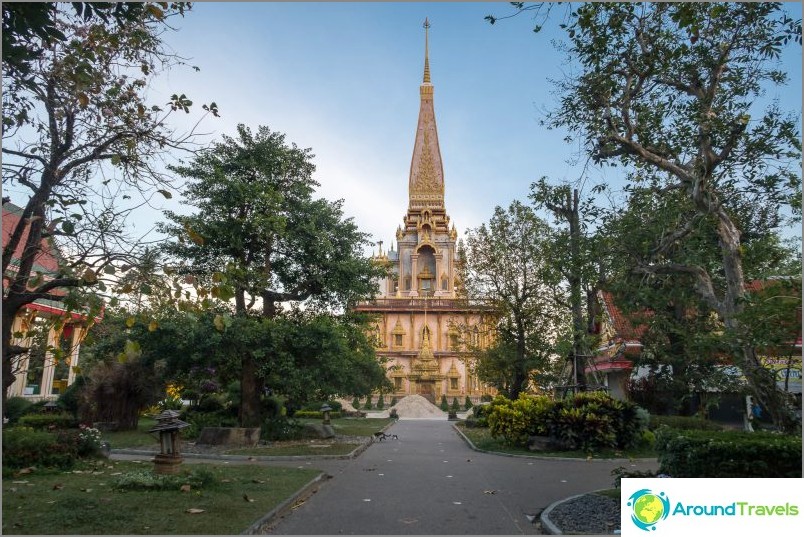 Stupa with the relics of the Buddha 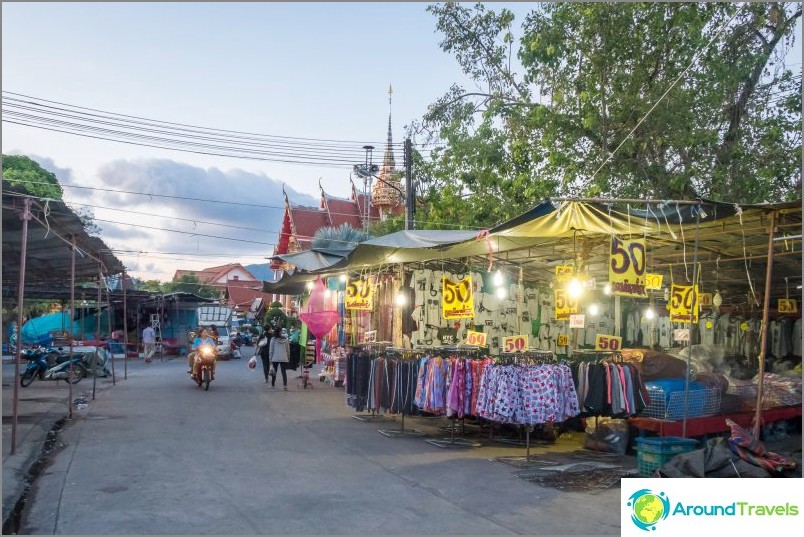 Half of the temple is occupied by the market

There are several ponds near the temple. If you walk, you will definitely stumble on a big one. On its other side are pretty Thai cottages. But if from this pond to go to the next, it is smaller and behind the fence, then there will be a running and cycling path around the pond. Since there is no shade, there is nothing to do there in the afternoon, but in the morning and in the evenings you can do sports.

Also on the road between the temple and bike pathsthere will be a good cafe, you can eat there if you get hungry. Name in Thai, so I will not tell you. The walls are brick-colored outside, around the greens. Works from 8 to 21. 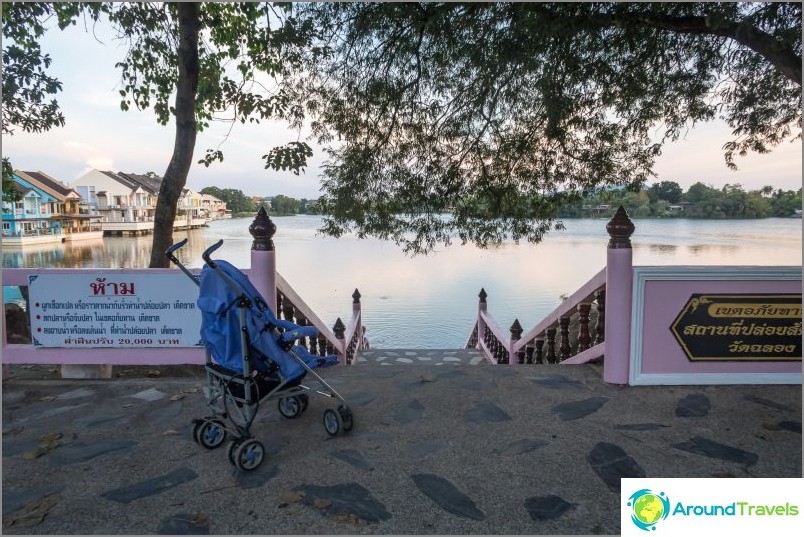 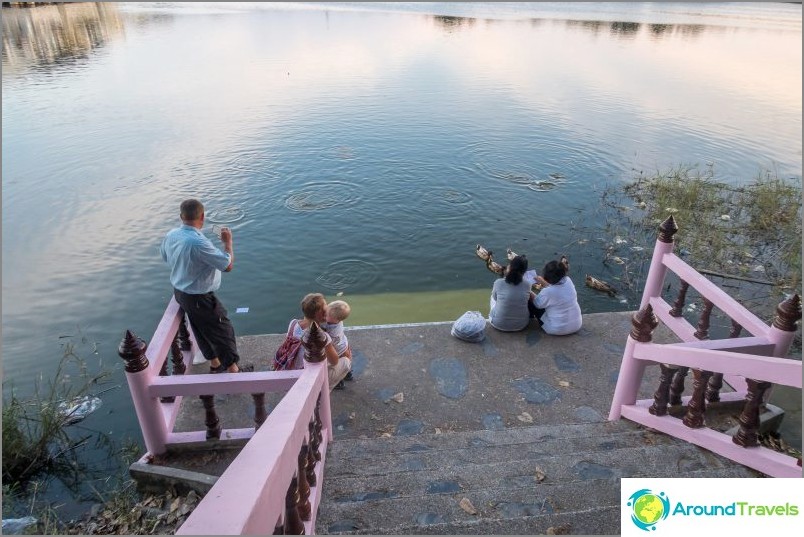 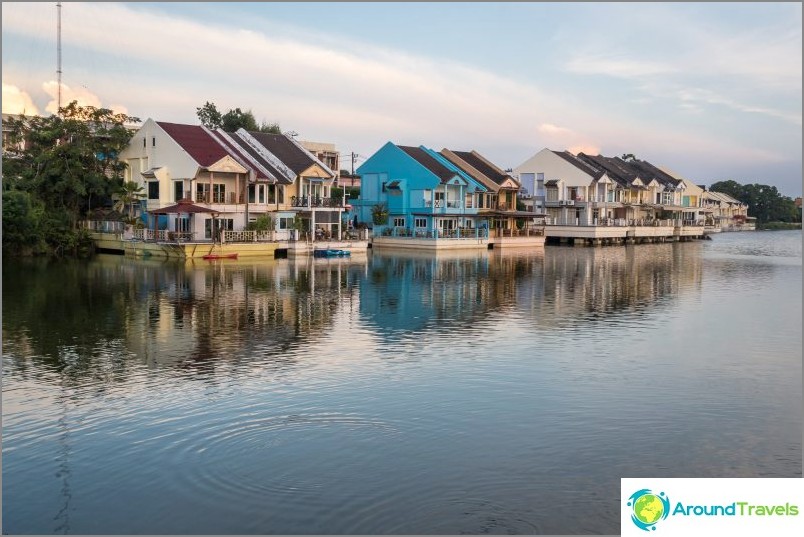 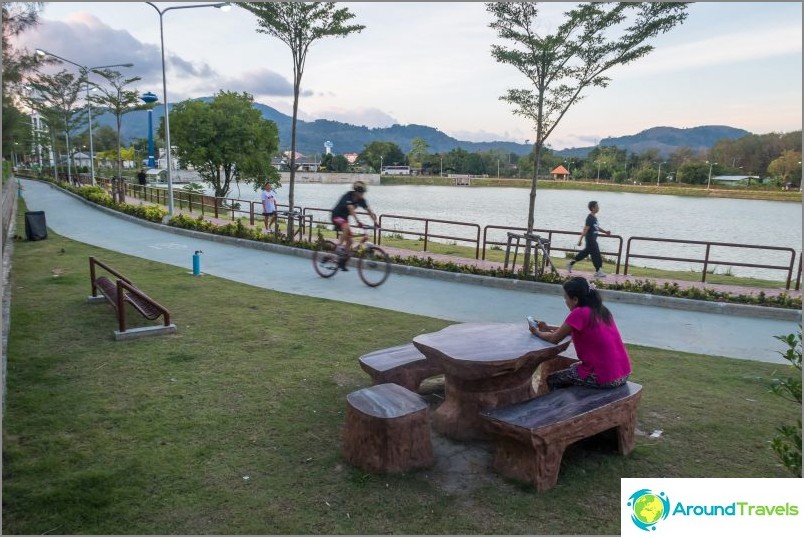 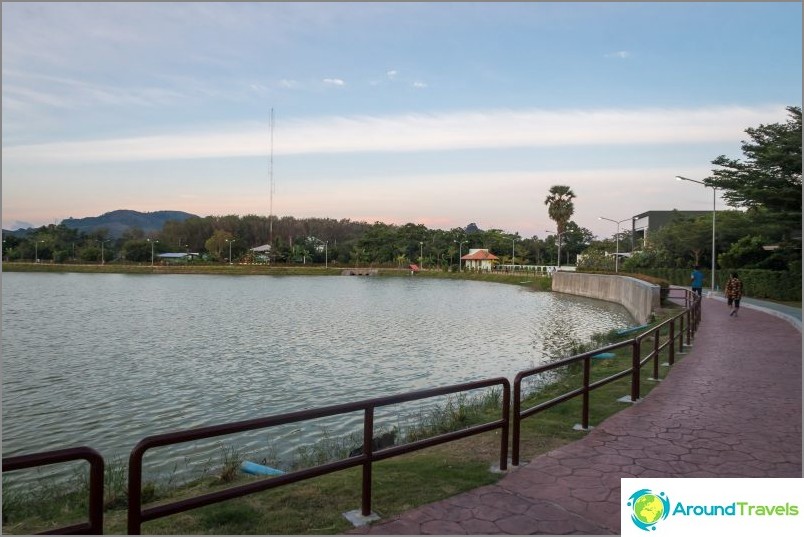 Reliable information about the creators and the exact dateThe base of the Wat Chalong temple has not yet been discovered. Serious historians remain silent, and the majority of open sources on the Internet are voiced by the year 1837, when there are references to the temple in documents and on maps, but the fact is that it already existed by that time. In 1846, Wat Chalong was reconstructed and received royal status and the second name is Wat Chayatarara. On Google maps, this temple is now also signed by two toponyms: Chaithararam Temple and Wat Chalong. Next in the history of the temple is the date - 1876.

As I understand it, at the dawn of its heyday, and far fromFor one hundred years, Phuket lived by mining tin. The Thais did not have enough of their hands, so they were loyal to the constantly arriving migrants from China, who over time practically drove out the indigenous people (the Far East, you are more careful with these guys). Well, in 1876, the Chinese rebelled, demanding better working conditions and higher wages, and the local people had to flee to Wat Chalong while the evil hard workers burned their huts and looted yards. The abbot of the temple of Luang Pho Chem acted as a peacemaker. With the help of the male population, he is where the word is, and where by force he helped to restore peace and order in Phuket.

In 1999, from the Government of Sri Lanka (the mainsupplier of the holy relics of the Buddha, judging by the stories of Thai temples) Wat Chalong received a Buddhist shrine - the bone of the Buddha. What kind of bone and what kind of Buddha - I did not understand, but for a person who has nothing to do with Buddhism, besides curiosity - this is not mandatory knowledge. The bones of the Buddha, as you understand, just can not lie, so already in 2001 it was solemnly walled up in the newly built stupa of Pra Mahathat.

Wat Chalong is open from dawn to dusk. When visiting the temple, it is necessary to observe the dress code “closed shoulders and knees”, and at the entrance to the premises to take off your shoes - you can only walk barefoot, although no one will be scolded for socks.

In front of the gates of the temple there is a mass of shops, wherethey sell souvenirs and offerings to monks - all this can be bought in the chain convenience stores of Phuket Town, where it will be much cheaper, albeit with less wide choice.

This temple is often visited as part of a tour of the island. Quite convenient, you can immediately go around a lot of places in one day.

If you decide to release small fish in a pond,people recommend doing it in the reed thickets, away from the main staircase, where the fish are stunned by the food that is constantly pouring on their heads and can easily eat the fry.

To photograph, standing with your back to the Buddha or against the background of the crematorium, is not necessary - it is disrespectful and in general to great misfortune.

From Karon and Kata beaches to Wat Chalong every 30 minutes a bus leaves, the ticket price is about 40 baht per person, and the most comfortable hours to visit the temple are in the morning and before lunch.

Chalong Temple (Wat Chalong)
Chalong Temple is one of the most famousBuddhist monasteries of the island. The highest building of the monastery - Chedi Phra Mahathat, keeps a particle of Buddha’s dust. However, this is more of a tourist attraction.
More about the temple. 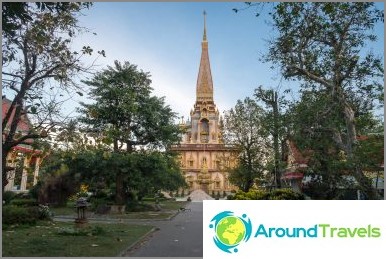 Chalong Temple is one of the most famousBuddhist monasteries of the island. The highest building of the monastery - Chedi Phra Mahathat, keeps a particle of Buddha’s dust. However, this is already more of a tourist attraction. More about the temple.