Wat Yan (full name Wat Yansangwararam orWat Yan Sangwararam, but more often it is called Wat Yan) is a large, one of the largest temple complex in Thailand, located south of Pattaya, about 20 km from its center. The complex with many buildings, ponds, fountains, park and forest occupies a huge area.

The temple complex of Wat Yansangwararam was laidin 1976. Since 1982, Wat Yang has been under the special patronage of the king, as evidenced by the royal monogram at the entrance to the temple with the foot of the Buddha, and on the territory there are statues of monarchs and bronze statues of King Bhumibol Adulyadey with his mother.

It is said that the king donated for the constructioncomplex of more than 270 million baht. Wat Yang is also an important center of Theravada, one of the Buddhist schools. Monks live on the territory, meditations are held in the morning and evening, so this is more of a monastery.

Buildings on the site are built in differentarchitectural styles: here there is a Khmer-style mondop, a stupa (or chedi), typical Thai structures, Chinese gazebos and even a Swiss lake chalet. And the largest, most prominent from afar, the temple is made in the Hindu style.

Wat Yang inside is something likeContemporary art exhibitions on Buddhism. There you can also see the figures of monks, made of wax. They look quite impressive - almost as if they were alive.

In the adjacent white color chedi (stupa) or PhraBorommathat Chedi Maha Chakkri Phiphat) relics of the Buddha and some of his disciples are kept, and the interiors are decorated with paintings. On the first floor there is a spacious hall with a Buddha, from there you can climb a circular staircase to a very small room with golden-colored walls, where the relic is kept. You can not take pictures there, they are watching. 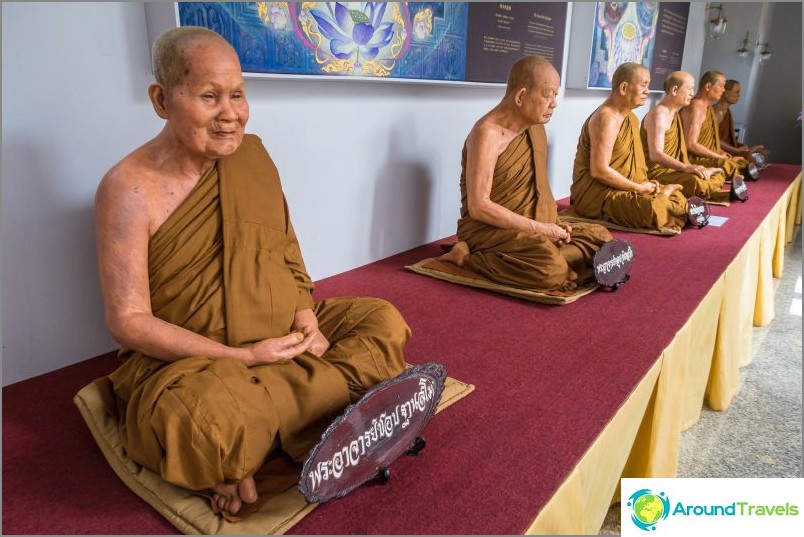 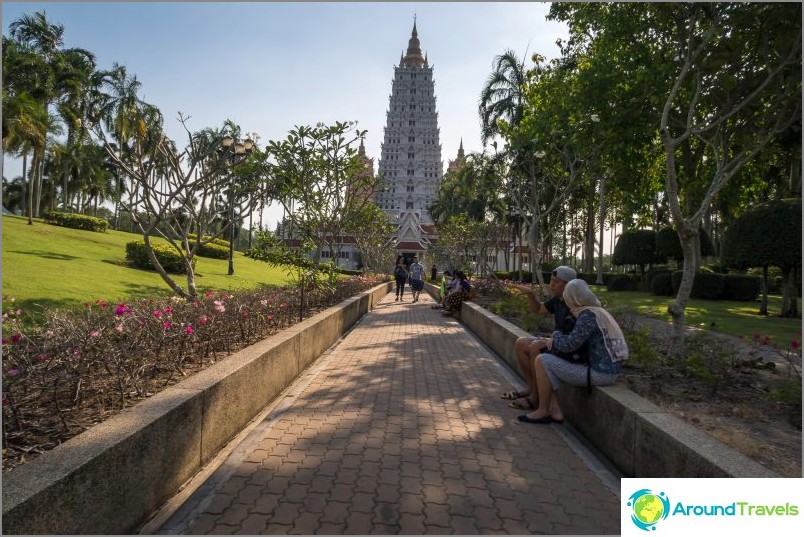 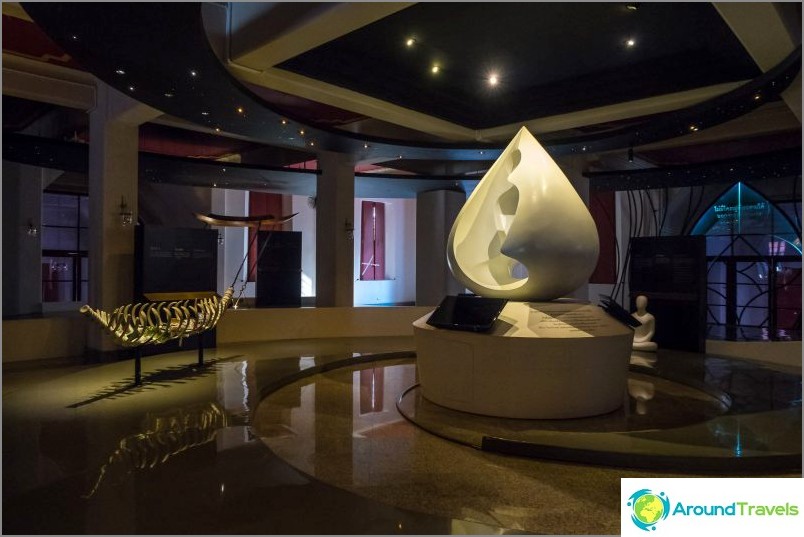 Modern interiors with installations inside 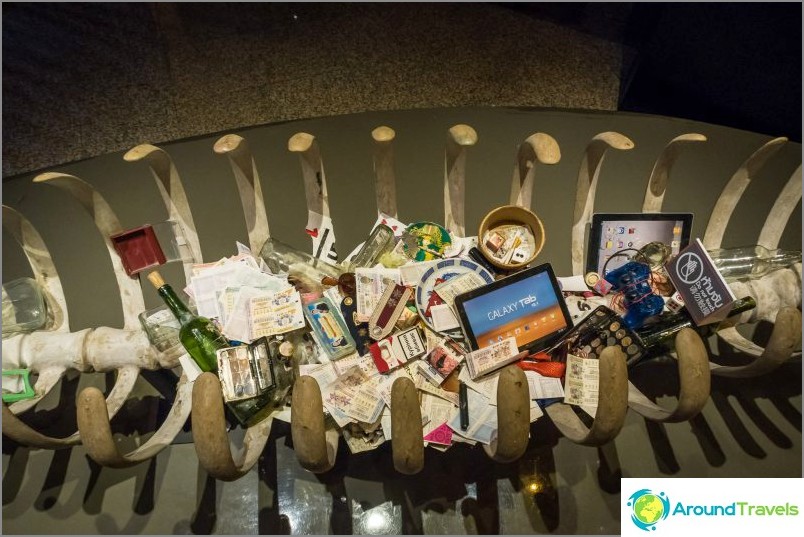 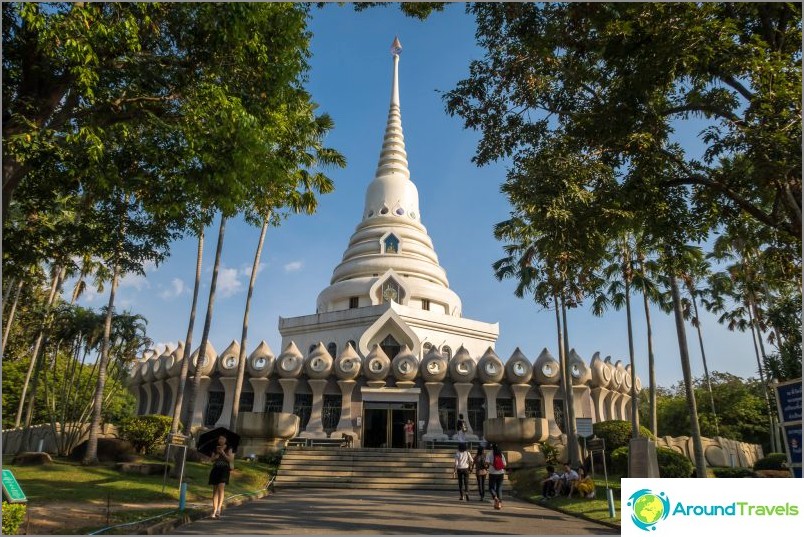 Stupa in the complex of Wat Yan 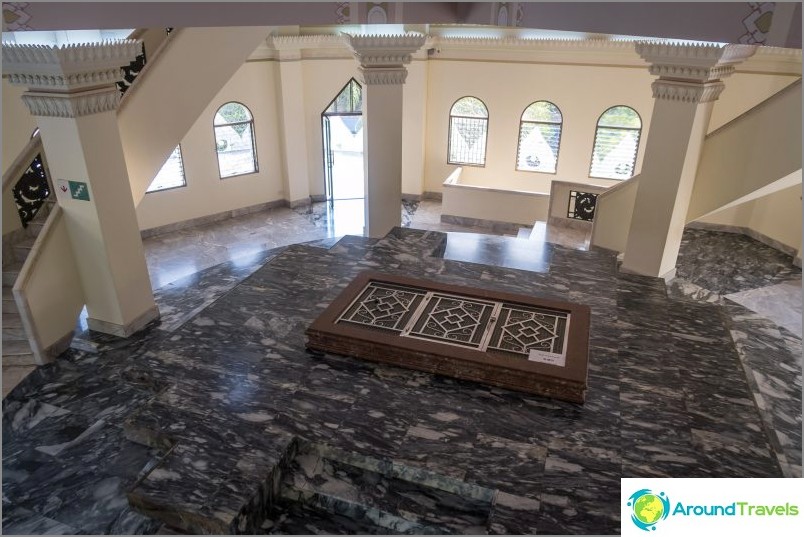 At the entrance to Wat Yan there will first be a lake on the right,on its shore you can see several picturesque arbors in the Chinese and Thai style. There you can feed the fish in the water. Now they look neglected, but still pretty.

If you drive further, there will be a pond on the leftcovered with beautiful pink lotuses. Further, on the territory there are fountains, flower beds, gazebos, ponds. You can walk for hours, enjoying nature and enjoying solitude. Unless of course you do not coincide in time with groups of Chinese tourists. They are usually brought to Wat Yang during the day. It is also better to choose morning or evening. To be able to enjoy the silence. 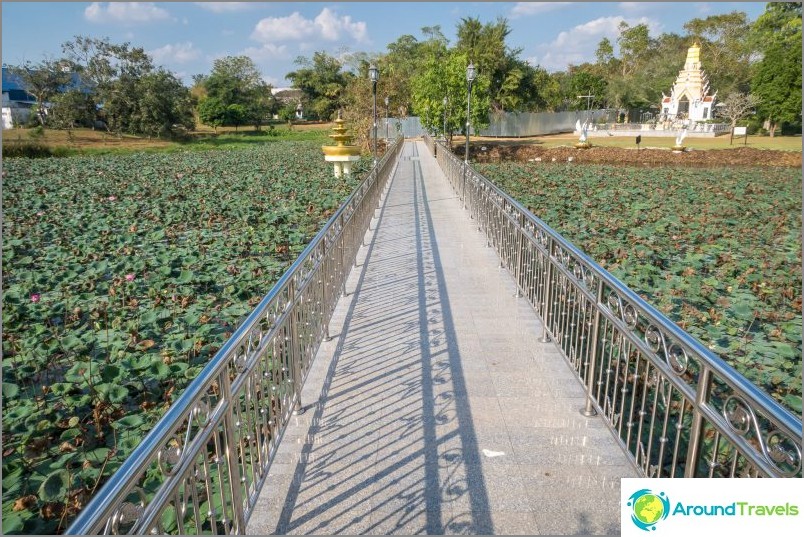 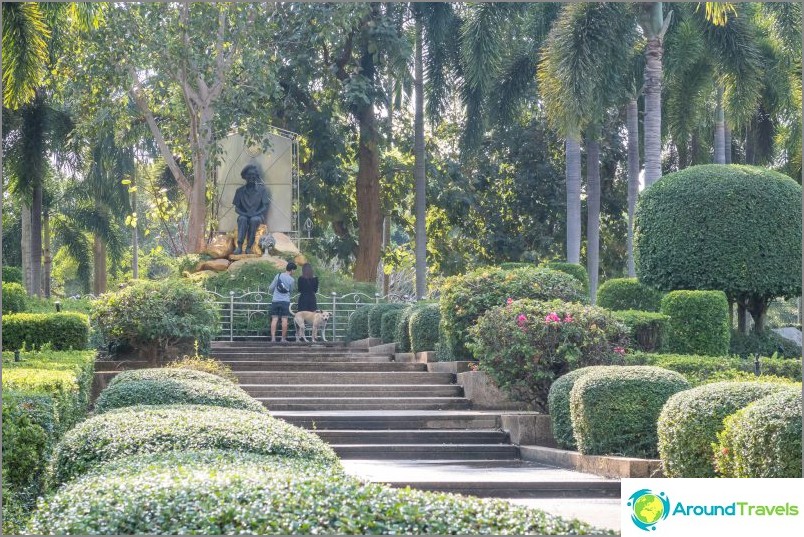 Sculptures and tracks on the territory of the temple complex 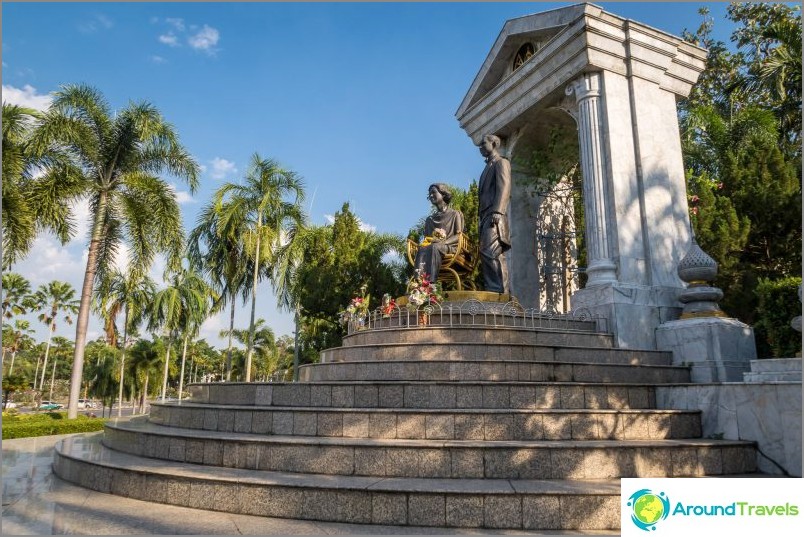 Monument to monarchs in the temple complex 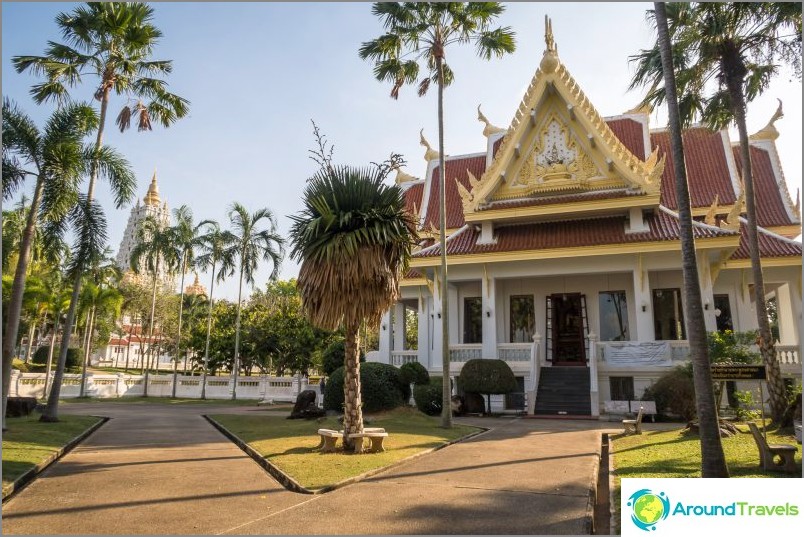 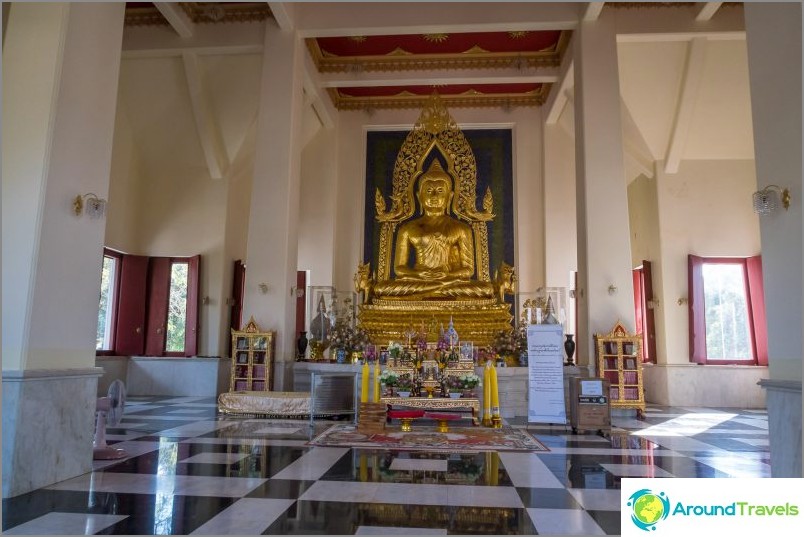 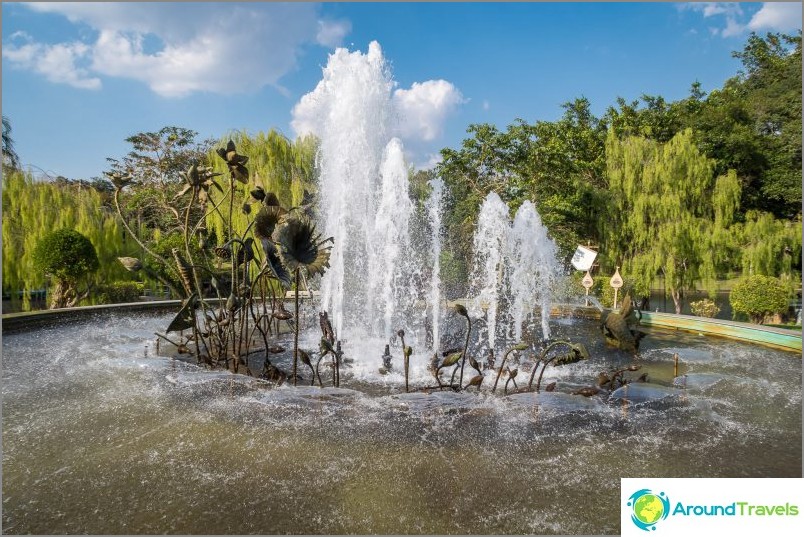 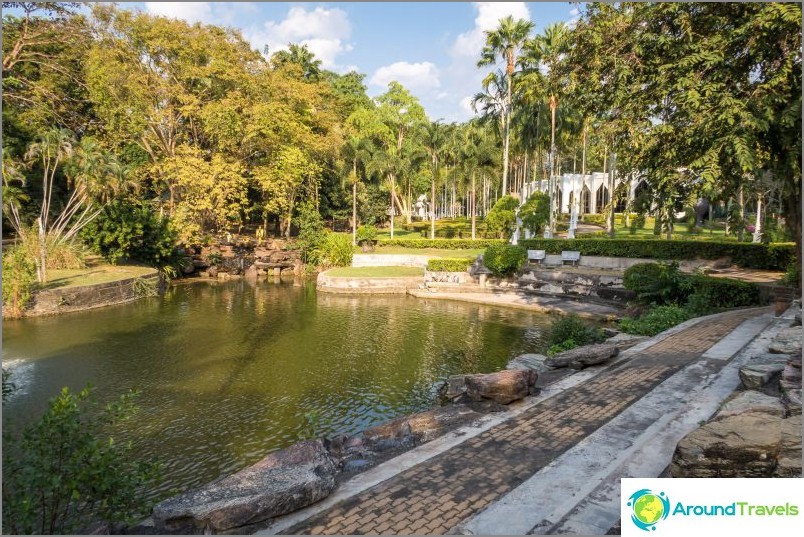 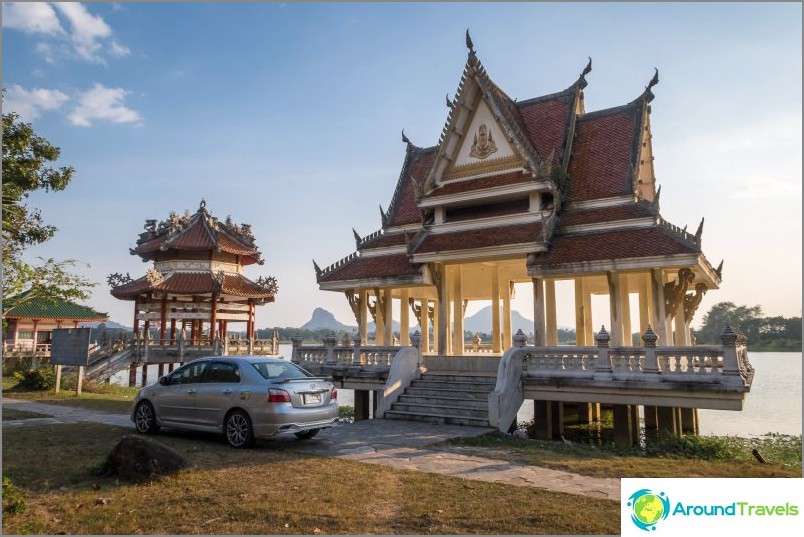 Pavilions on the shore of the pond near the temple complex 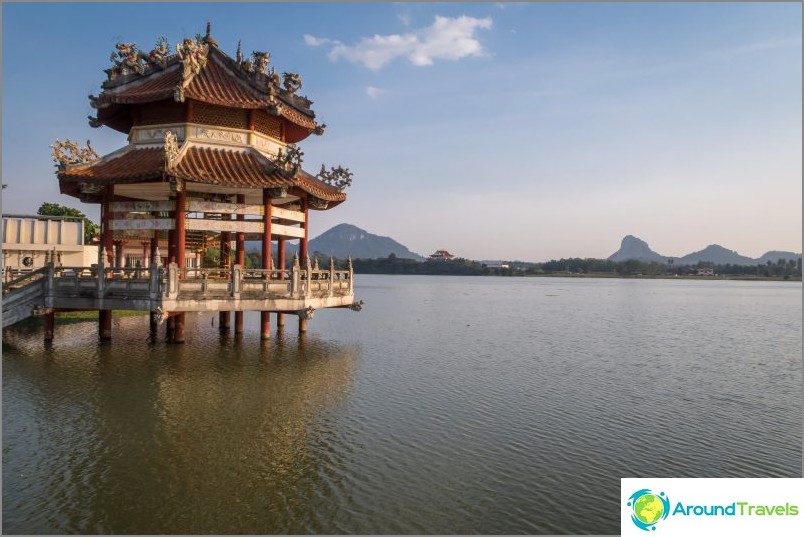 Gazebo and the Mountain of the Golden Buddha in the distance 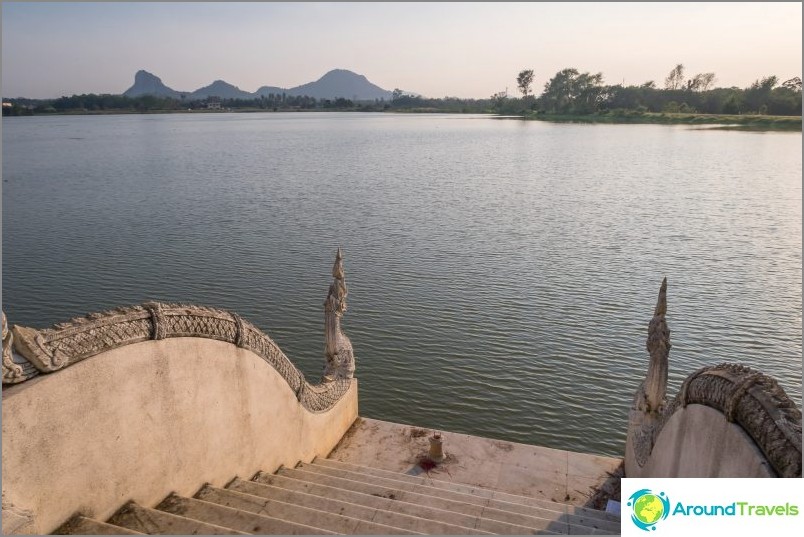 Descent to the lake from arbors

For Buddhists, this is of course a special place. Therefore, coming to Wat Yang to dress better is appropriate so that the shoulders and legs are covered. There is a lot of greenery on the territory, but you can get used to getting burnt in clear weather in the daytime, so it’s better to choose morning or evening for a walk.

In addition to religious buildings there is also a school, hospital and stations for the care and breeding of endangered wild animals.

On the territory, as elsewhere in Thailand, manyCafes, where you can eat. There are toilets. At the entrance, at the parking, there is something like a gift shop. In the same place, organized excursion groups sit in electric trams. The territory is very large and it is quite difficult to get around it. 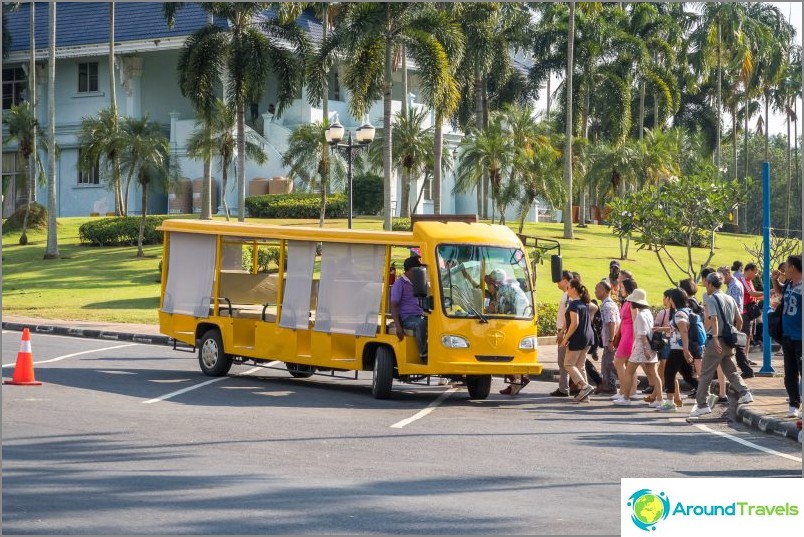 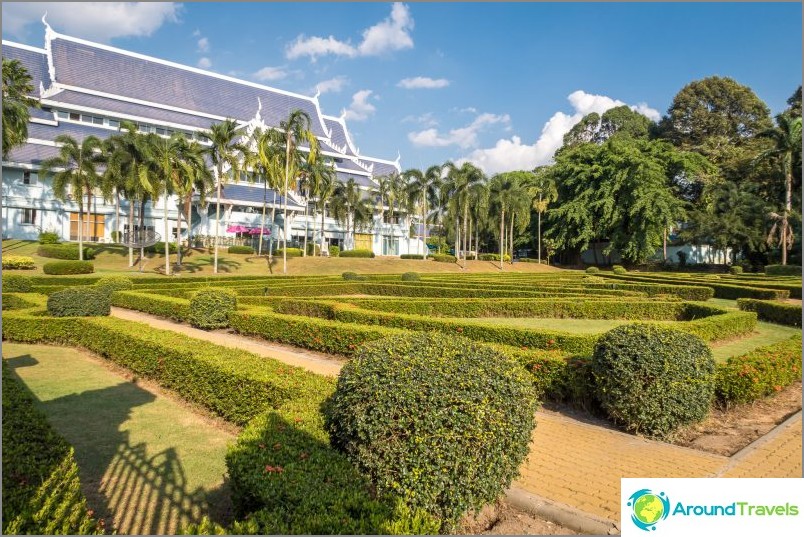 Green and well-groomed area around the temples

One of the main relics of the complex is “imprintBuddha’s feet ”is in the Phra Mondop temple on the hill to which 300 lead (so they say, he did not count). From there, beautiful views of the picturesque green surroundings, the lake, the mountains and the silhouette of Pattaya on the horizon. This temple, or rather its location on the hill, impressed me the most. Panorama, lack of tourists - everything, as I love. Maybe I'm wrong, but I would go to this area for the sake of Chinese temple and for Phra Mondop, but not for Wat Yang.

To rise to the foot of Buddha, you must first passfrom Wat Yang quite far along the asphalt road through the forest (by car / bike there quickly), and only then to overcome those same 300 steps. They start right outside the parking lot, it’s hard to miss.

Guides say climbing stairs clearsand in every way it adds to karma, and if you count the steps to ascend and descend and turn them back to be less, it means that the pilgrimage was not in vain. There you can make a wish and ring the bell for their performance. Quiet and peaceful place, there was literally a couple of farangs in front of me and everything. The temple itself was closed. 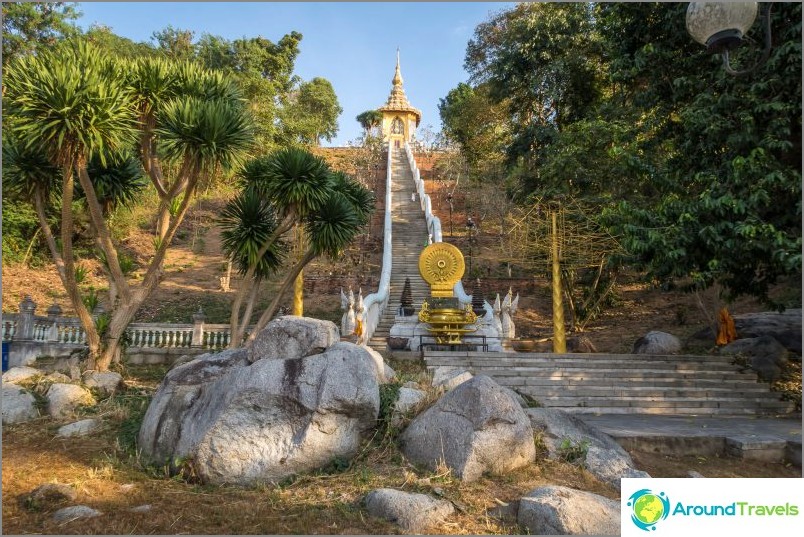 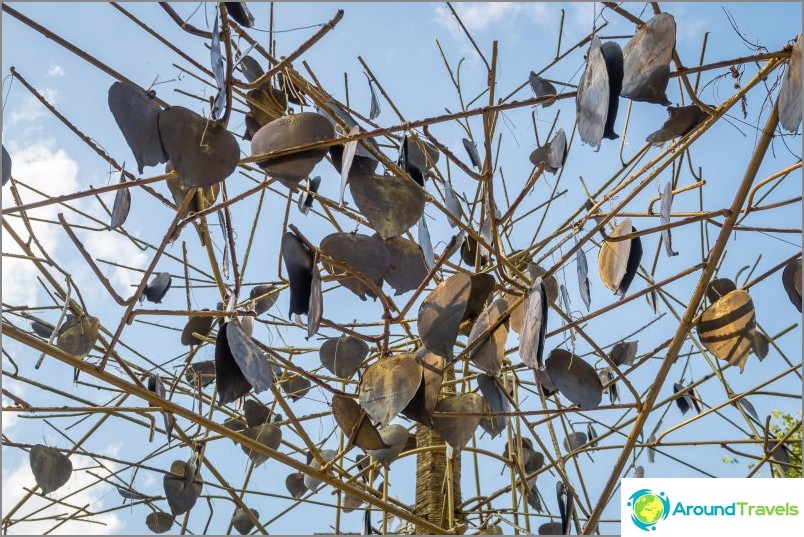 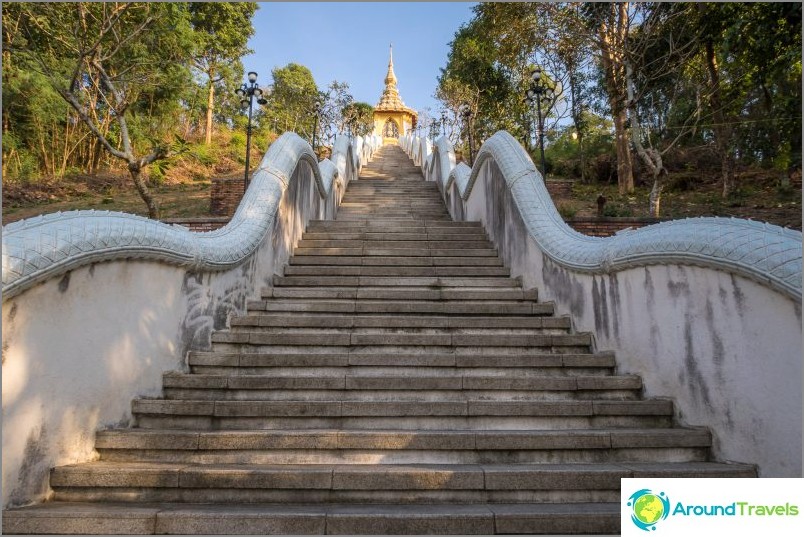 Stairs to the temple Phra Mondop 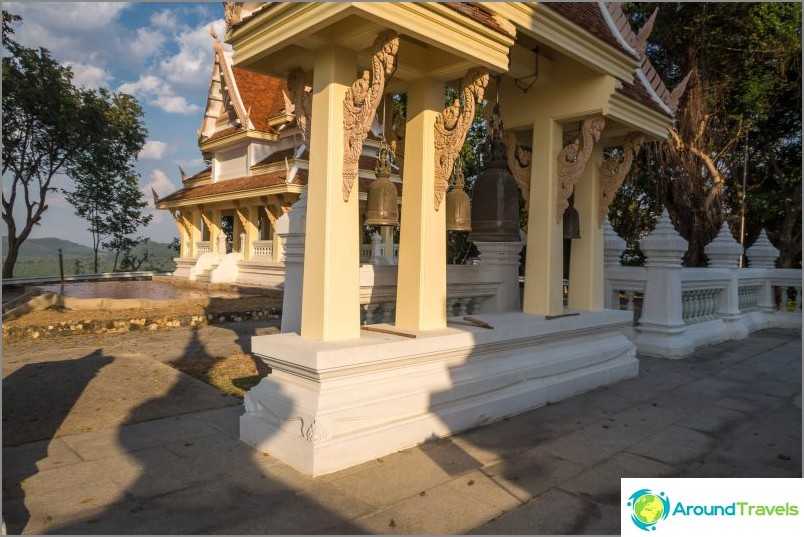 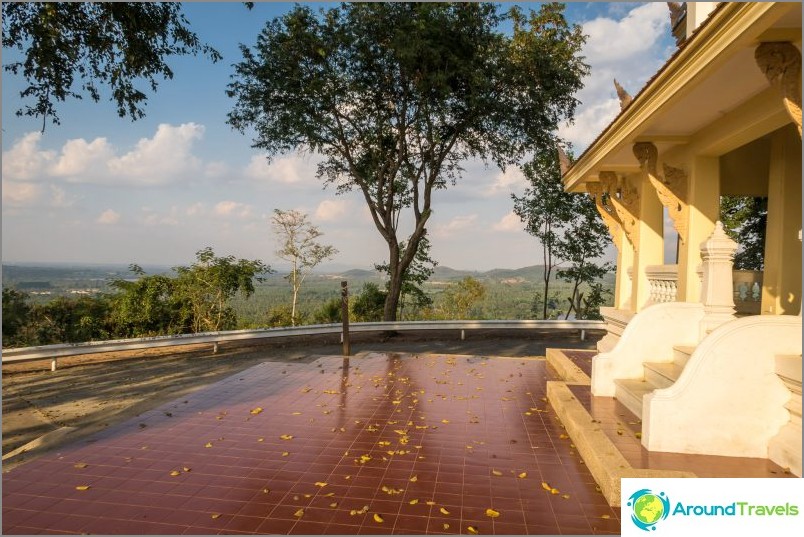 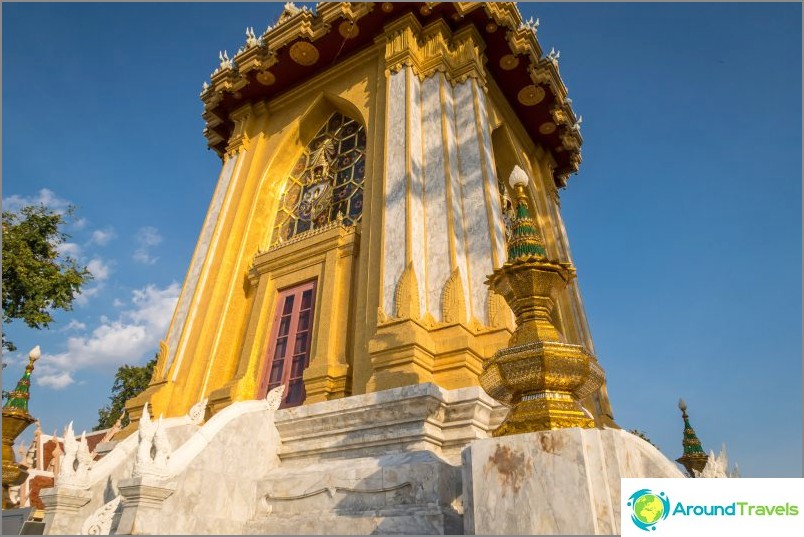 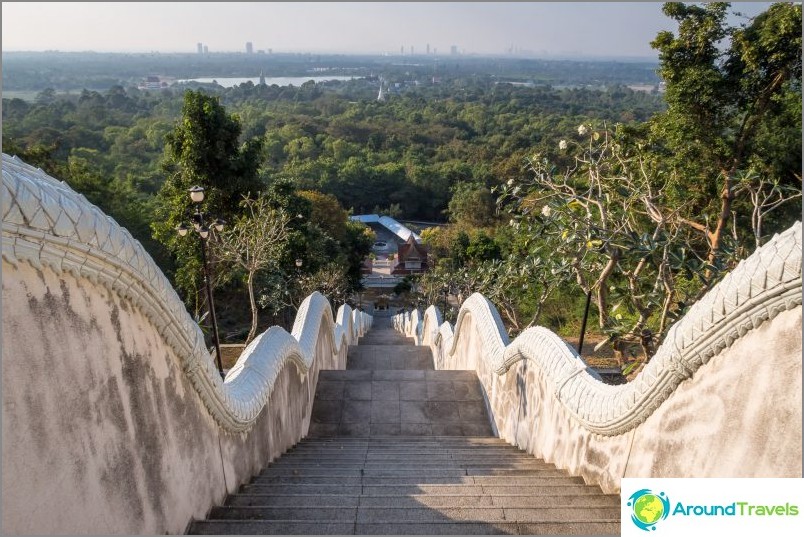 To the temple with the foot of the Buddha, on the mountain, it is also more convenient to climb not in the heat. In the morning, the staircase is in the shade of trees, and in the evening the sun is already low and from the top of the hill you can see a nice sunset.

The Wat Yang complex is located south of Pattaya and close to The Mountain of the Golden Buddhavineyards Silver Lake and temple museum Viharna Sien.

You can get to Wat Yan on your own transport,taxi, as part of an excursion or partially by public transport: you must drive along Sukhumvit on a white tuk-tuk for 20 baht towards Sattahiba, get off at the bend to the left, follow the sign for Greta farm and Wat Yang and catch a taxi that takes about 10 minutes to the temple.

Wat Yang Temple
Temple complex - Wat Yansangvararam with largebeautiful territory and many buildings in different architectural styles - Indian, Chinese, Thai. On the territory of the complex, in addition to gazebos by the lake, greenery and various temple buildings, there is an imprint of the Buddha’s foot on the mountain, a staircase leads to it.
Read more 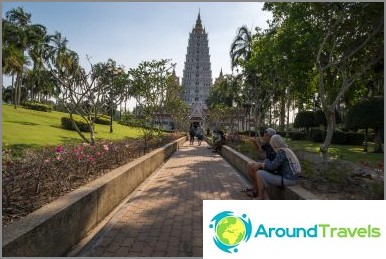 Temple complex - Wat Yansangvararam with largebeautiful territory and many buildings in different architectural styles - Indian, Chinese, Thai. On the territory of the complex, in addition to gazebos by the lake, greenery and various temple buildings, there is an imprint of the Buddha’s foot on the mountain, a staircase leads to it. Read more

Phra Mondop Temple
Temple in the territory of Wat Yan. IMHO he is more attractive, given its location on the hill, with a view.
More details. 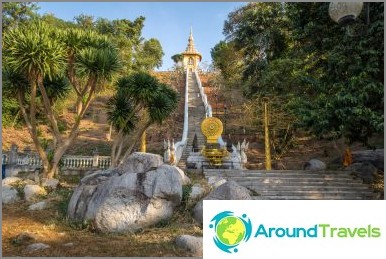 Temple in the territory of Wat Yan. IMHO it is more attractive, given its location on the hill, with a view from the view. In more detail.

Chinese temple in Pattaya - I recommend to see

Spit Tuzla - the fight for a place under ...