Not the most popular waterfall on Samui, howeverthe place is pleasant and I personally liked it, so I recommend it to those who love places far away from civilization, more difficult to access, but really divorced from the world and beautiful. It is quite difficult to go here, especially in the wet season, because the last couple of kilometers pass along the territories of mountain farms, and farmers love big jeeps and do not like to build roads. The waterfall is not near the road at all, not at all as tourist Namuangi waterfallsand the waterfall itself is much smallerand scale, if we compare it with Namuang, and there is no tourist infrastructure around it. In general, I would say that this is the last worthy stronghold of the wild Samui.

Khun Si translated from Thai as "Mr. Si"and this is the name of the owner of the durian plantation in whose territory this landmark is located. Khun Si Falls conditionally is a cascade of three steps, the inspection of which you start from the middle step - this is where the path ends, where you will go down from the motorbike parking lot. So, if you stand at this middle step towards the flow of the river (looking up to the source of the waterfall), the water behind you will fall sharply and deep down, this is the lower part of Khun Si. In this place there is a font, where usually everyone climbs. Be careful, especially if you come here with children - the stones are slippery because of the leaves and water, you can fall down to the bottom.

So, we continue to look at the top of the channel. Before you is raging an average threshold, which most visitors take for a dead end and do not try to see what is higher there. And behind this threshold there is a platform about which almost no one knows, and very few people find it, and it’s there that the whole salt of the waterfall is: I would say that the place is beautiful, behind the scenes, and there is a pair of baths two meters deep. I do not understand at the expense of what it is, but the place is surprisingly good and crawls, binds immediately and forever.

I do not know, probably because it is very acutethere are tropics, nature, no hint of urbanization. Here you are, standing somewhere on a mountain, far from cities and villages, near a real waterfall in the middle of a real jungle, which causes a tickling feeling of unreality of what is happening, as if you were in a movie. The place is tightly cut off from the outside world, where there are no thoughts and everything you do - you watch, listen and relax with your soul. 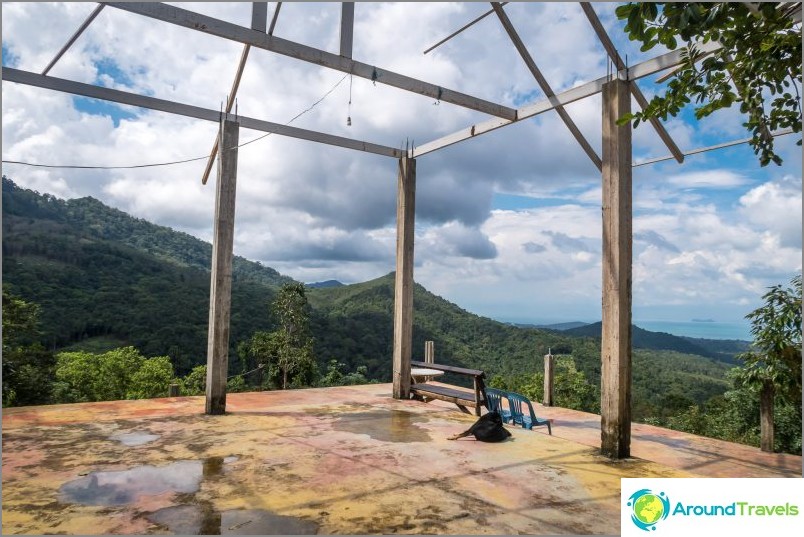 Inspection starts from the observation deck 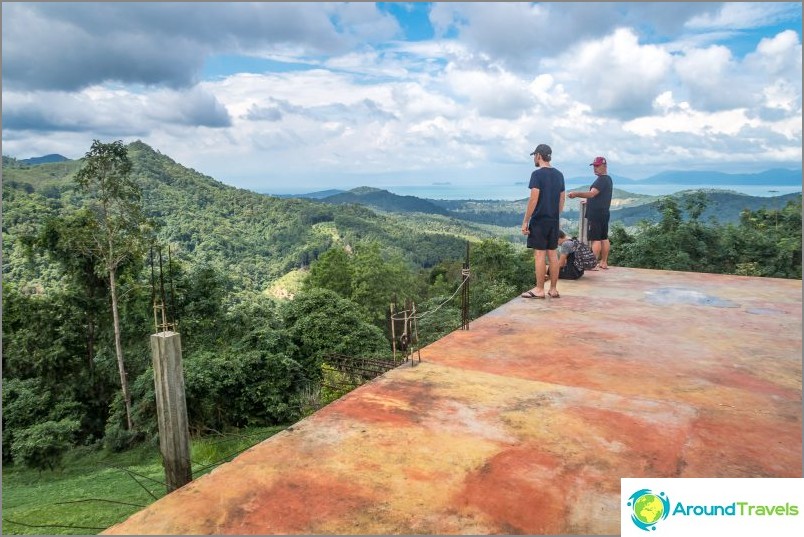 A kind of eternal unfinished 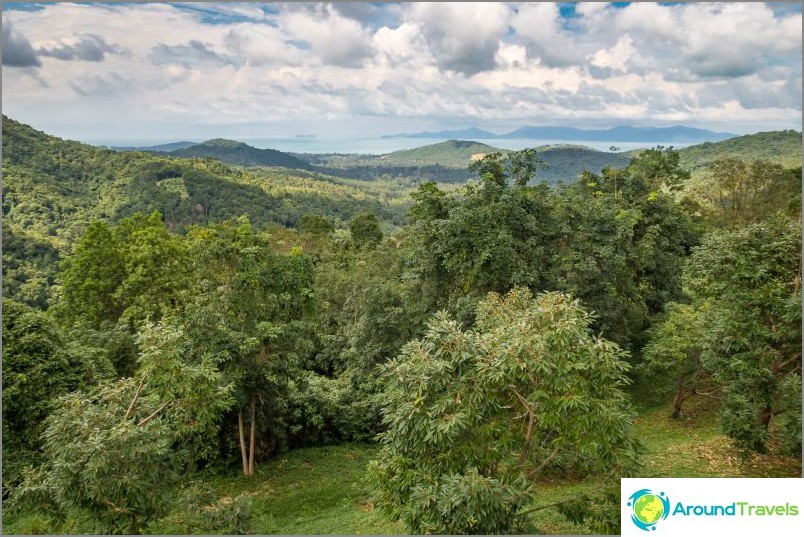 View of the Maenam district from the lookout 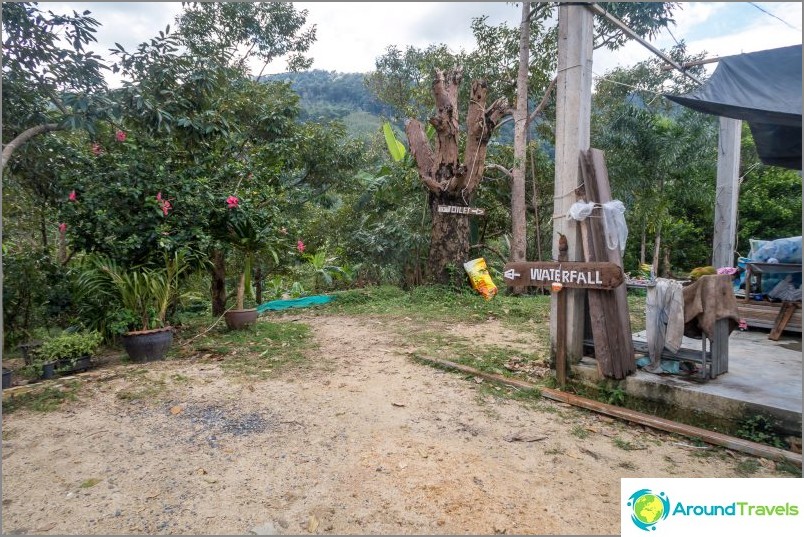 A lookout where to go 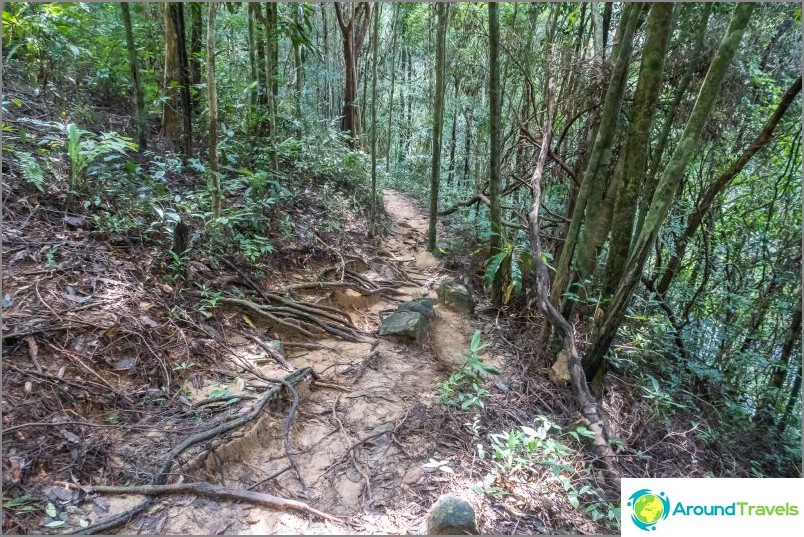 The trail at the end of the path is quite picturesque. 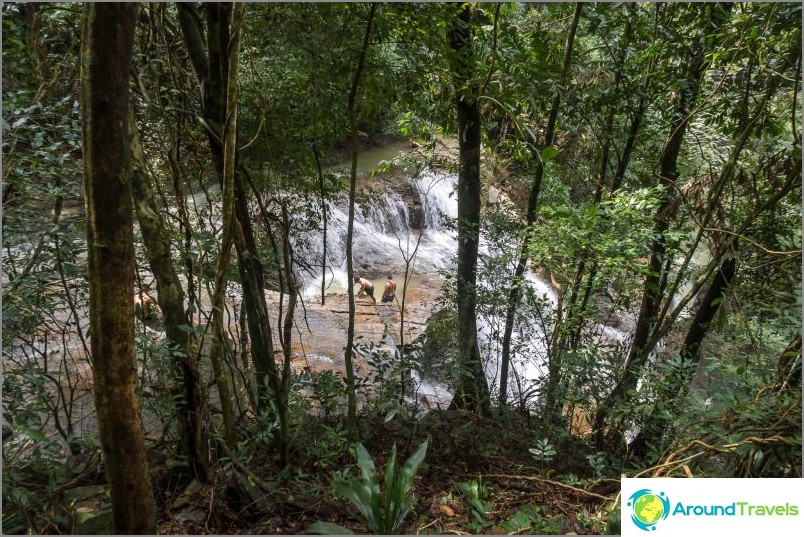 The end of the trail, so you will see the Khun Si waterfall through the trees 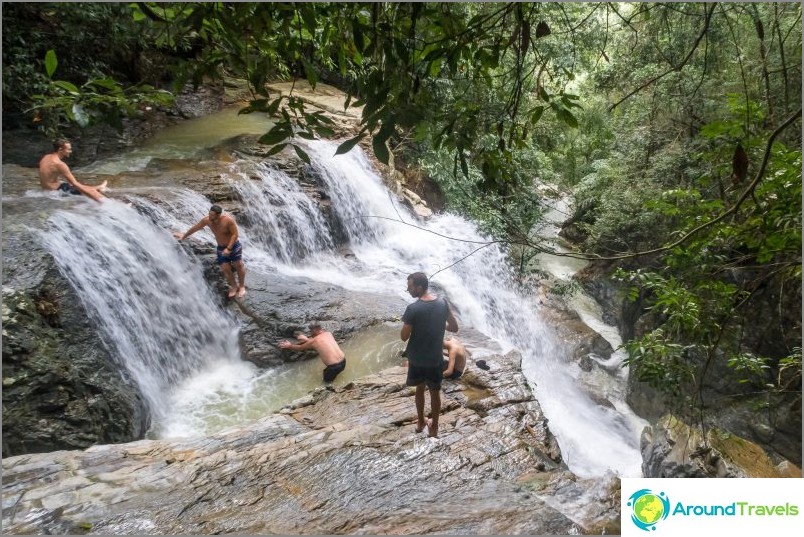 This is the lower threshold, there is usually all and bathe 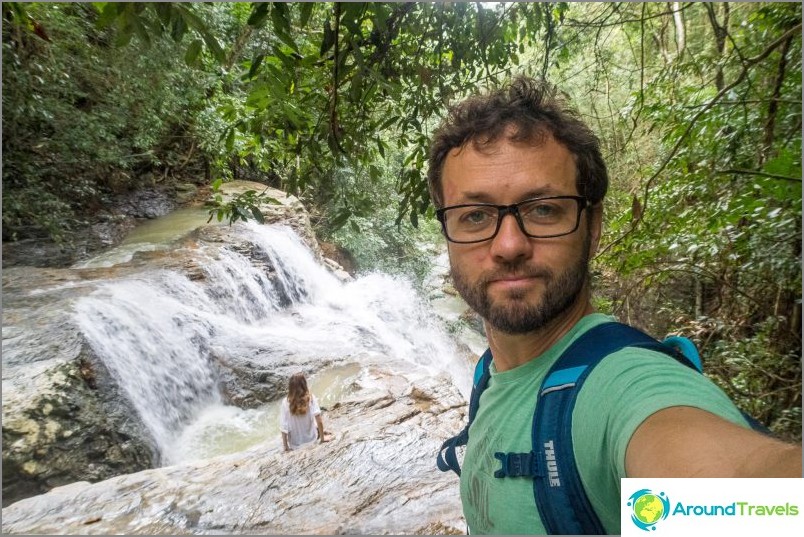 But I did not, because I knew the secret place 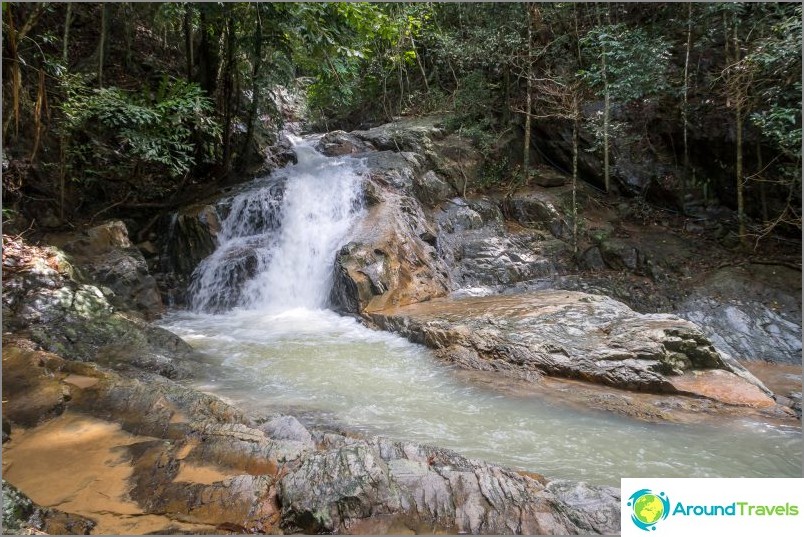 This is an average threshold. On the rock to the right of the stream you can climb up. 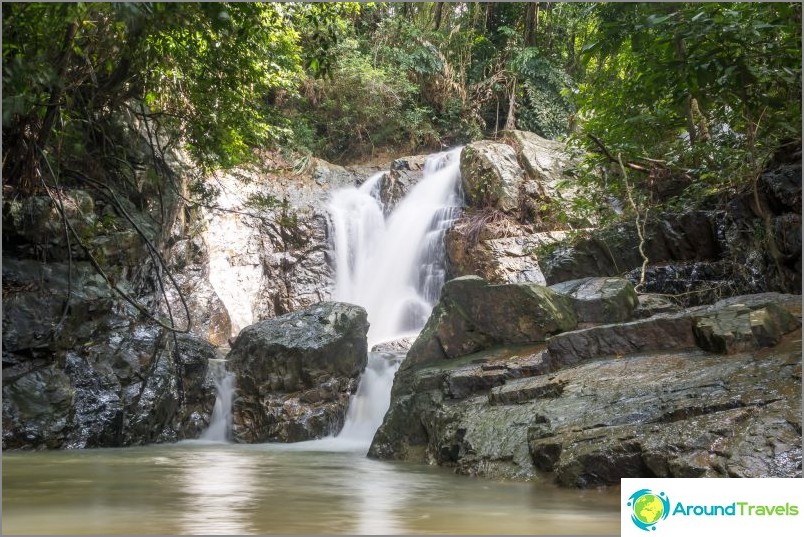 And this is the secret part of the waterfall - the lower font. 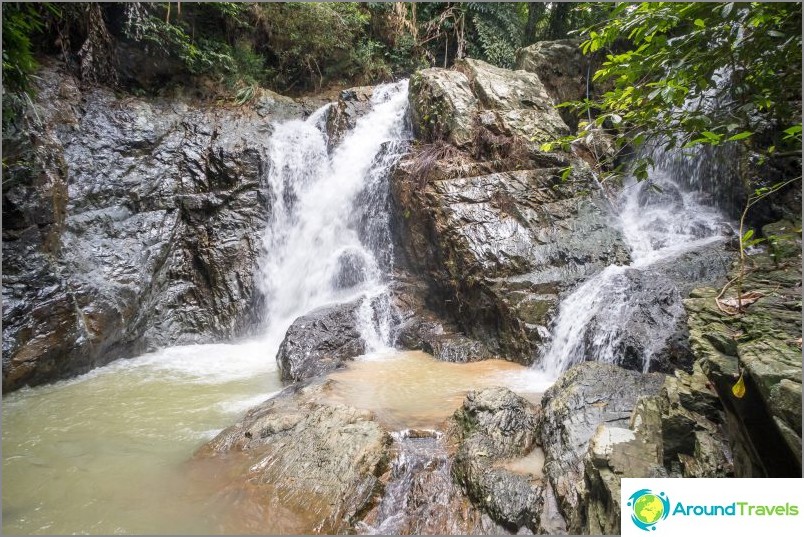 And the top font

Yes, guys, I understand that the waterfallnot at all niagara. But this is Samui, here all the waterfalls are shallow, so you should not wait for the water falling from a height of even a hundred meters. Not everyone, for sure, will share my delight from this waterfall, but the place is valuable precisely because it is not a tourist and at the same time quite beautiful. One road, which is worth it, while I was riding a bike, stopped several times to take pictures.

Allocate an hour and a half to visit the waterfall. While you reach the baths, while jumping from the cliff, while you are dry, you will rise, sit on the viewpoint - time will fly by. Yes, by the way - the road initially leads to an unfinished viewpoint where concrete piles stick out - this is the entire infrastructure in the location. From the viewpoint you can see the gorge between the ridges, which belongs to the Maenam region, and on the horizon, in good weather, you can see the island of Phangan. Sometimes there is a couple of Thais who take money for entering the toilet and sell drinks at prices just above the store. In general, remember - this is a private area, and you need to behave accordingly. The trail to the waterfall passes by durian trees and God forbid you to pick at least one of the fruits.

In the best case, they will tear you away from 1000baht for damage, at worst - they will call relatives in the police and give you two tons of problems and much more serious expenses. And do not flatter yourself about being deserted - the hills here have eyes. From the parking the road goes through the forest, to the left and down the slope, after three hundred meters and 10 minutes of easy trekking you will get to the waterfall. But back to the mountain will already be difficult to go. The main thing is there, do not forget about the upper cascade - there were two companies with me that did not even know about the secret, and when I climbed, everyone rushed after me. Lucky for them. 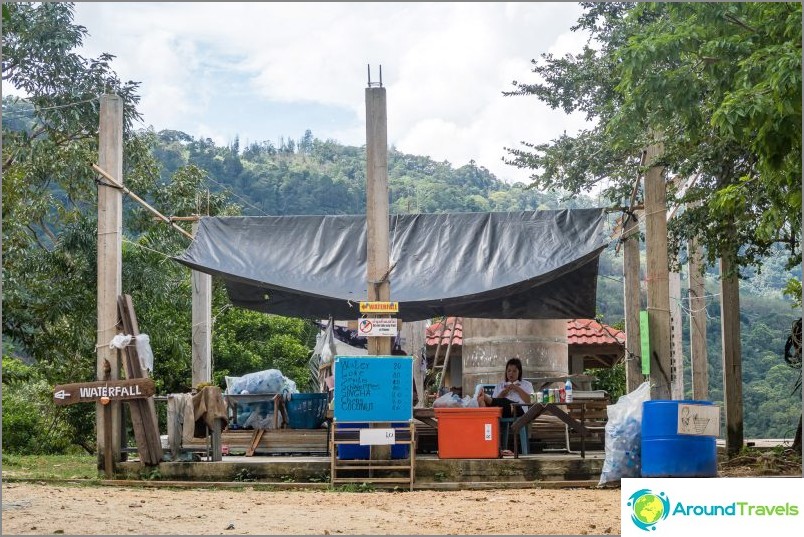 To get to the waterfall is better on the navigator, byThere will be many small turns on the way, and in some places there are doubts whether I am lost. But along the way there are signs, and you can easily navigate through them, for example, all the beginning of the way from the ring road you will come across zip-line posters of Tree Top Cable, which are located on a mountain 200 meters from the turn to the waterfall. At some point, you will need to turn on the primer and the last stretch of the path is quite stressful, even in some places it can be difficult for beginners.

But in a dry time there will be no problemsfarmers are driving the road by pickup trucks. But I was driving after the rains, when the road was completely unhappy and in some places I skidded well. But on the other hand, waterfalls on Samui are not, in principle, the most spectacular, and if you are going to see them, then it is better to do it after the rains. So what is the personal choice of everyone: either comfort and level road, or furious primers, but a stunning view. 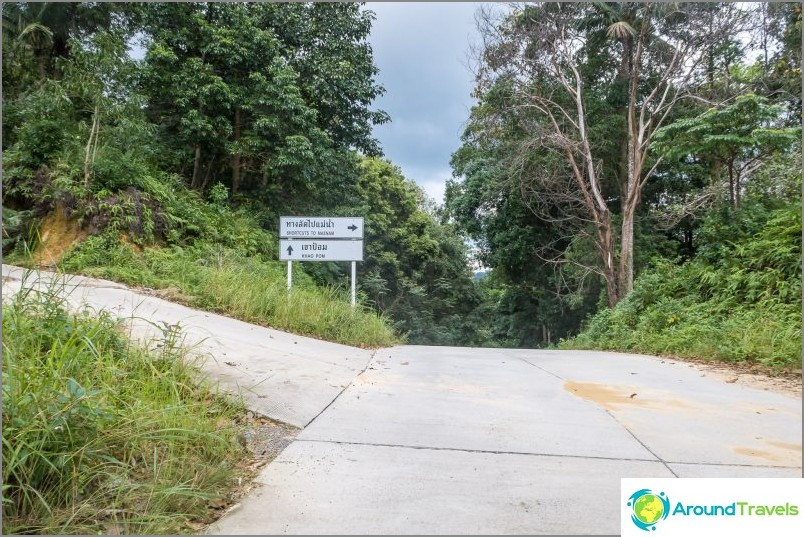 If you go with Chaweng or Lamai along the Lamai-Maenam shock, then immediately after these signs, the descent and primer to the waterfall 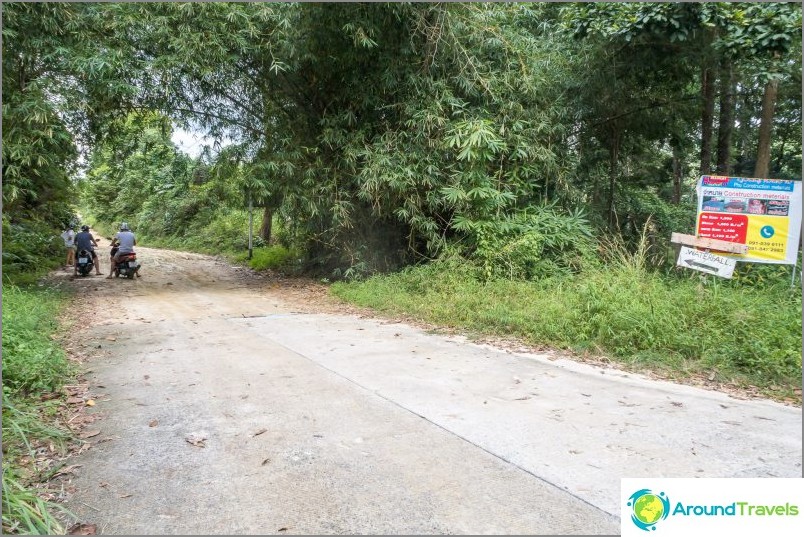 These are signs on the primer, from which the path to the waterfall begins. 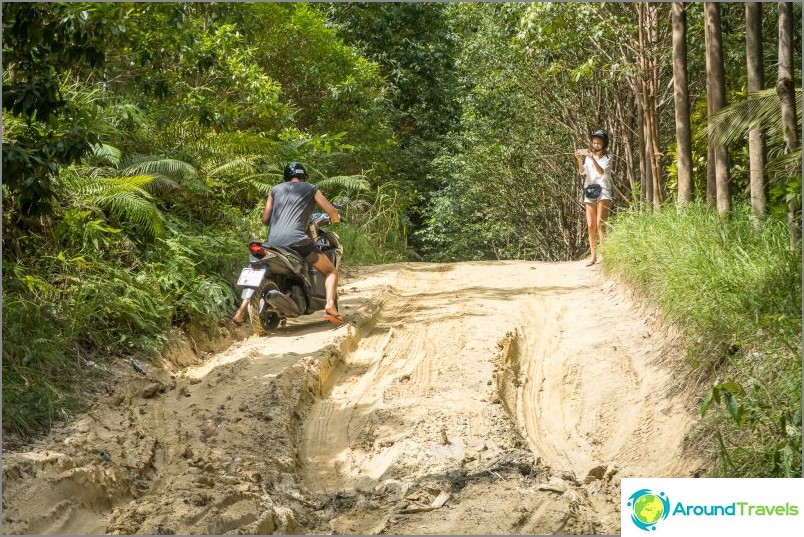 It will be difficult after the rains 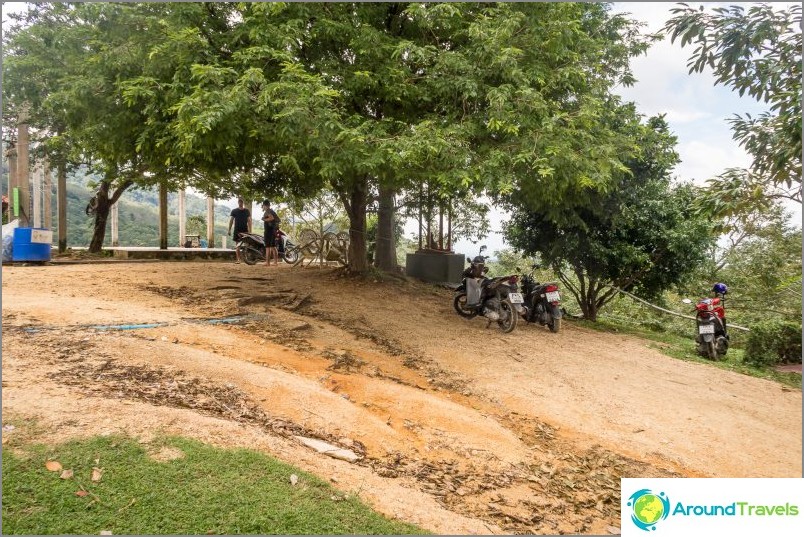 At the end of the road - decent sized unpaved parking.

Khun Si Waterfall
The waterfall is located in the middle of a mountain road connecting Lamai and Maenam beaches on the territory of a duriane plantation. One of the most enjoyable waterfalls of Koh Samui.
Read more about the waterfall.

The waterfall is located in the middle of a mountain road connecting Lamai and Maenam beaches on the territory of a duriane plantation. One of the most enjoyable waterfalls of Koh Samui. More about the waterfall.

Gekko Bar on Samui is a cult place ...