Kabardinka is a small resort village ten kilometers from Gelendzhik in the direction of Novorossiysk. Since the distances are small, we can say that attractions around Gelendzhik and Novorossiysk apply to Kabardinka. By itself, the village is very resort. It is located in the bay, the coast from the mainland in this place is fenced off by small mountains. In Kabardinka, the depth of the sea grows very smoothly, there are no big waves, therefore, it is good to relax with children here. In Soviet times, there were many pioneer camps in Kabardinka. But I would prefer stop in gelendzhik.

What to see in the district

During World War II the front lineApproached Kabardinka at a distance of only 20 kilometers. Not far from the village, on the Peny Cape, a fortified artillery battery was built with ship guns that protected the water area of ​​Tsemesskaya Bay in order to prevent the landing of the enemy in the port of Novorossiysk. Captain Zubkov's battery was fired almost continuously for a whole year, several tens of thousands of people died on it, but the Germans were unable to capture or destroy the fortifications. Now in place of the battery, you can see the guns, bunkers and bunkers, the rangefinder post, the command post. In 1951, in the place where the battery was located under the command of Captain Zubkov, a monument in the form of a sailor’s sculpture was erected in memory of the dead. 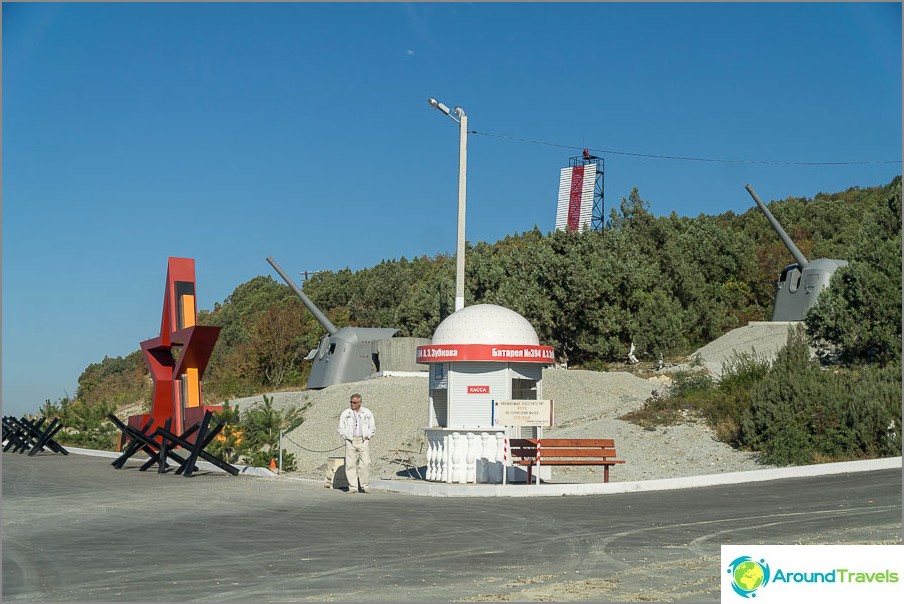 You can make an interesting walk from Kabardinkaa walk to the mountain range apart from the sea, which has 3 peaks and is called the Three Sisters. From all peaks of the mountain there are excellent views of the coast and the line of the sea.

In the city itself

Bringing Down the House

"Inverted" houses have recently becomepopular tourist attraction. They are in Moscow, in the Crimea and in Anapa. Kabardian house is located at the intersection of Revolutionary and Mira, near the Eternal Flame. It is near the bus station, behind the market. There are quite a few people who want to visit the house during the season and at the weekend. You may even have to stand in line. Going upstairs to the House is for the sake of diversity and new sensations. Where else can you run on the ceiling, for example? Many visitors have a strange feeling and a slight disorientation because of the unusual situation, some even feel dizzy. But still this attraction is rather fun and entertaining. And in the house get interesting and funny photos. Having connected the imagination, it is possible to make the original and memorable pictures for memory. It will be interesting to look at the unusually located interiors of the house not only for children, but also for adults. More about the house upside down. 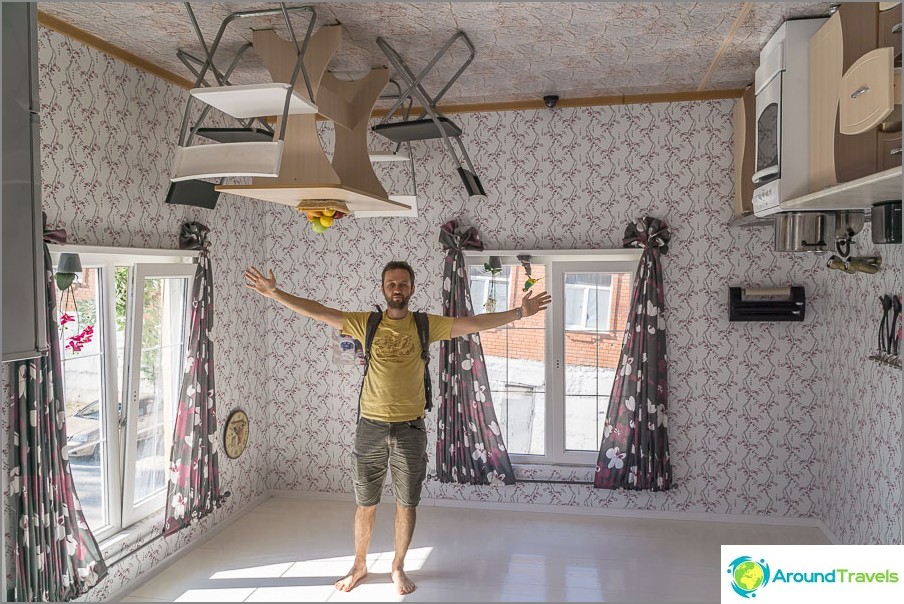 House upside down in Kabardinka

This is perhaps the most famous place in Kabardinka -private theme architectural park. On a small area of ​​the park there are buildings of different architectural eras and styles, from ancient Egyptian to modern. There are similar parks in many cities around the world. For example, Mini Siam in Pattaya. Interesting objects in the park are very compact. The reduced pyramid of Cheops, the Greek temple, fountains and medieval towers under palm trees and agaves are connected by well-groomed clean paths. People in the season can be a lot. But the park is green, there is not only architecture in the territory, but also fountains, ponds with fish and turtles, museums (House of the Caucasus, art gallery), there are also pavilions with old exhibits. In the park there is a free tour for everyone. Here, in a small area, the entire visible history of culture and architecture fits in and harmoniously. Especially good park looks at sunset. Read more about Old Park. 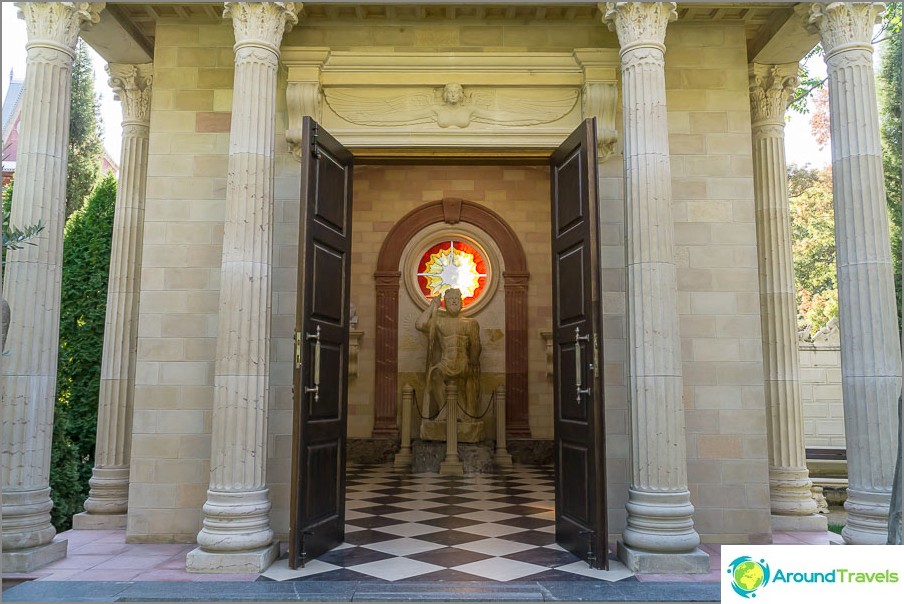 As in Gelendzhik and Sochi, in Kabardinka tooits own embankment. Perhaps, it is not as big and lively as in major resort cities, but still it is a very good place for walking. In the center, the embankment is wider than at the edges, in this place there are many tents and pavilions with rides, snack bars and souvenirs. There are also flowerbeds, a fountain where tourists like to be photographed, many cafes and canteens with music in the evenings. Further, there is a bridge over the Doob River, amusement park and dolphinarium are slightly off the embankment.

On the central embankment of Kabardinka, immediately behindbridge opened amusement park "LunaPark" with the usual attractions for such places for children and adults. These are trampolines, carousels, an indispensable spinning wheel, various cafes, ice cream trays and cotton candy. In general, the standard set of entertainment resort town, the most that is to pass the evening at sea.

Glass workshop with showroom and shoplocated on Mira Street, next to the Pearl of the Sea sanatorium, just a few steps from the seafront. The building is small. In one part of it there is a shop with souvenirs and various glass objects, in another there is an exhibition hall, entrance is paid there, you can take a guided tour. Here are exhibited the author's works of local masters and you can look at the glassblower at work, take a master class (for a fee) and make a glass souvenir yourself. Children will be interested and useful to learn about a new profession for them. The guide tells about the techniques of working with glass, the history of this craft.

Recently, rope parks are becomingmore fashionable entertainment for both children and adults. Small routes open in all more or less large cities across Russia. Kabardinka is no exception. Local rope park is open on the territory of the sanatorium "Pearl of the Sea". Children especially like to overcome obstacles in the form of hanging bridges and rope climbing the ground, so this park will make a pleasant variety in a beach holiday.

Monument to the dead on "Admiral Nakhimov"

A monument is erected on Cape Doob, near the lighthousePassengers and crew members of the Admiral Nakhimov motor ship sunk in Tsemessky bay. This happened on the night of August 31 to September 1, 1986, the motor ship at the exit from the Tsemesskaya bay collided with the cargo ship Peter Vasev, which entered the port. "Admiral Nakhimov" was the largest passenger motor ship of the Black Sea Fleet, with its crash killed more than 1200 people. On the monument are carved the names of the dead and set the ship's on-board clock, which were raised from the bottom of the sea. They show the time when the tragedy occurred - 23:20. The monument stands on a high coast, from where a good view of the sea opens. 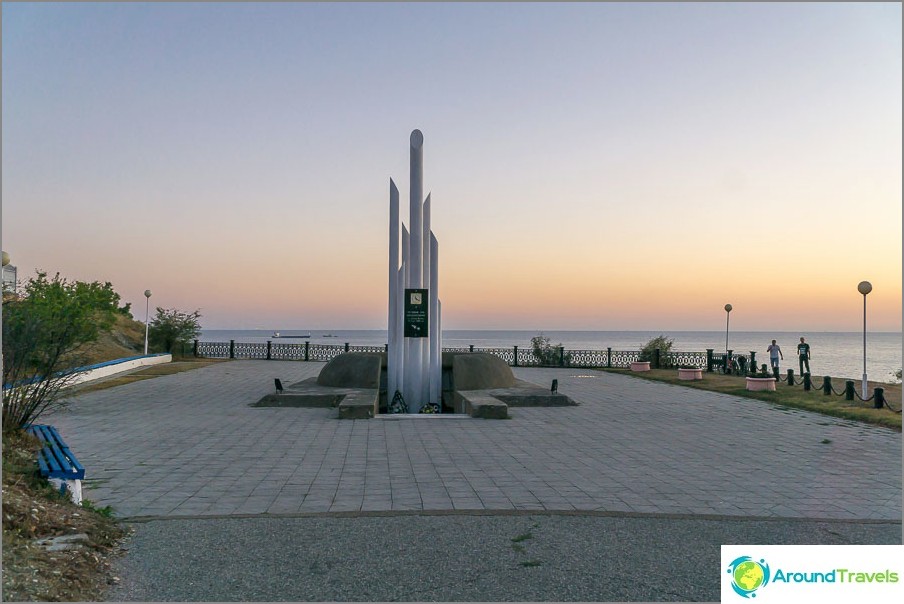 Monument to the dead on Admiral Nakhimov

The aquarium is small in size, with manybacklit aquariums. It will be interesting to children and those who decided to visit such a place for the first time. The rest can be boring. If you wish, you can book a tour or look at the various fish yourself. Adjacent to the oceanarium is the exotarium, which contains exotic for Russia reptiles and amphibians: spiders, snakes, etc. Plus aquarium in the location - in the center of Kabardinka. It is nice to come here on a hot day, air conditioners are working inside, there are indoor twilight. A good place to diversify a family beach holiday.

Kastalskaya font is a good restaurant onthe outskirts of Kabardinka, with a trout farm and a large green area. Arbors are arranged around the fish pond, bridges, flower beds and other landscape design, as well as several enclosures with birds around. This is a beautiful place for photo shoots and walks, where you can also go fishing. The cook will immediately prepare the caught trout or other fish and serve it to the table. In addition to gazebos around the pond there is a large restaurant building with a banquet hall. In the restaurant you can order kebab, trout on coals, salmon. Children will be interested to see birds: pheasants, peacocks, chickens, pigeons. That is, this place is suitable as a restaurant and just for a family vacation. The place is very pretty: around juniper thickets, benches, a small water mill, sturgeon in the pond. The restaurant itself is quite expensive, but the food is tasty. Not far from the restaurant there is an observation deck with a good view of the Kabardinka. 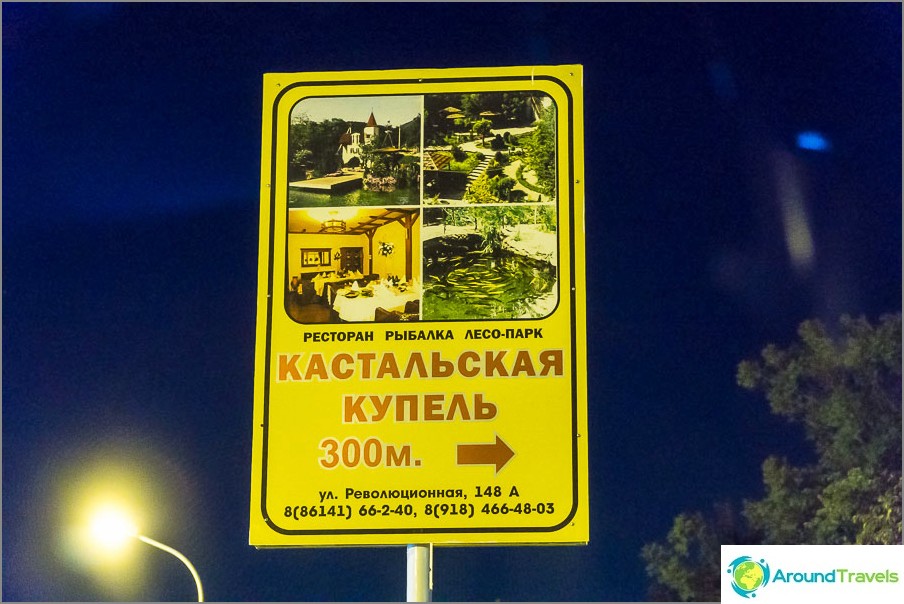 Dolphinarium is located in the city center, next tocentral beach and sanatorium Pearl of the Sea and is popular with holidaymakers. Dolphinarium has recently been opened, small in size: five rows of seats and a canopy from the sun. In addition to the two dolphins themselves, the sea lion participates in the presentation. The show lasts about an hour, including dolphins draw pictures, which are then sold to viewers. After the show, you can swim with dolphins for an additional fee, buy souvenirs, take pictures.

The exhibition "City of Kuban masters"

The exhibition was opened in 2013, locatedunder the open sky in the park, in the city center. Tells about the life and crafts of the Kuban Cossacks, their stories. In its sense, this is a theme park museum with interactive elements. There are celebrations of traditional Cossack holidays, various competitions, games, you can see traditional houses and household utensils, see stables, wells, ovens, real working tools that are more than a dozen years old, original household items: from a chair and gramophone to spinning wheel and home-brewed apparatus, weapons. There is a smithy on the territory where you can take a master class. There is also a pottery workshop on weaving toys, drawing. In the park there are various thematic sculptures, there is a children's theater, a Roman military museum, you can buy souvenirs.

What to see in Anapa and where to go ...

What to see in Gelendzhik and where to go ...