What to see in the Krasnodar region - a selection of attractions

Despite the fact that most of the trips I havecome abroad, I still really like our Krasnodar region, where I try to visit once a year. Not a service, of course, attracts, but nature and something else inexplicable. True, I usually drive to our Black Sea in spring or autumn to avoid crowds, so I see resorts and attractions a bit different than most people see them.

Regardless of when you go toKrasnodar region, there you can see a lot of things in terms of attractions, ranging from natural, to man-made (below a certain TOP10). The main thing to remember is the rule that in August the peak season and, accordingly, the most people. So, if you want less movement, then choose other months.

10 km north of the village of GolovinkaJegosh Creek gorge, where you can see the beautiful cascade of waterfalls. There are 33 of them here! 13 rapids and 7 voskatov form an incredible picture. The highest is the lowest waterfall - 12 m.

On the slopes of the stream picturesquely spreads boxwood andmany other relict plants. The path to the waterfalls passes along the course of one of the largest rivers of the coast - the Shah. There are tea plantations around, as well as a cheese factory located nearby, where tourists are offered to taste all sorts of hot, fresh Adygei cheese.

At the foot of the cascade of the 33rd waterfalls there is another bright attraction of these places - the trout farm, where you can feed the fish and learn interesting facts about the intricacies of their breeding. More about 33 waterfalls. 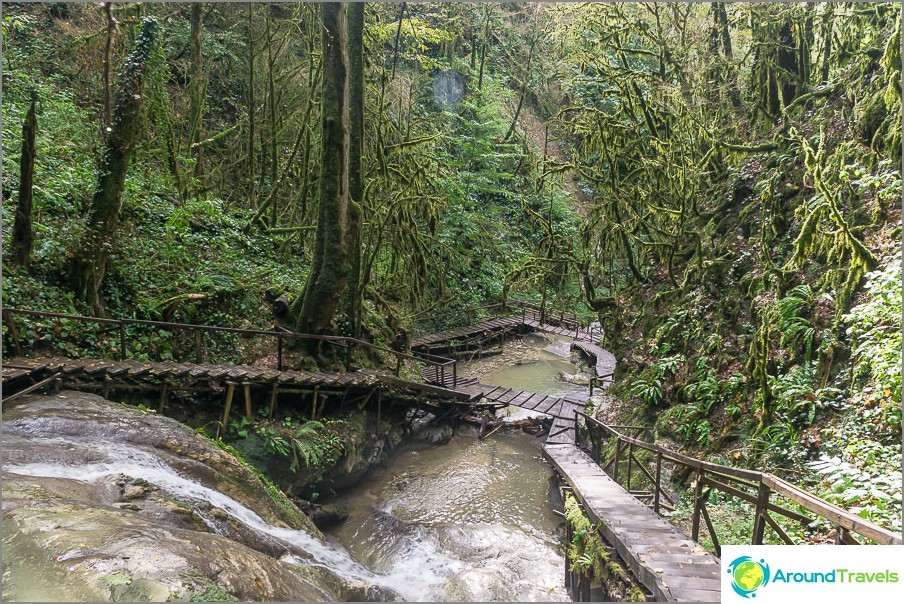 Here they are 33 waterfalls, go down

Tiger cave is in the vicinity of the villageThagapsh, in the Lazarevsky District of the Krasnodar Territory. This cave is unique in that it is at the same time a source: water falls from the river Khekuay from it. At 30 meters from this river, on a picturesque slope is the entrance to the cave. The name of the cave comes from the unusual, striped limestone.

The length of the Tiger Cave is 160 m., and the set of its moves has an area of ​​304 square meters. km In most places, the vaults are lowered so low that you can only walk on the water squatting. The main part of the cave is completely filled with water. Next to the cave is the Sparkling Falls, falling from a height of 35 meters, as well as a dense relict forest with huge oaks, beeches and three hundred year old chestnuts.

Located on the banks of the river Mzymta in Adlerlarge trout farm. This is the only trout-breeding plant in Russia engaged in the cultivation of fry. Since the early 1960s, there are 111 ponds. The fish grows in them for 4 years, gaining weight during this time up to 12 kg.

Arriving at this place, you can see the real ones.Wonders of selection - trout, which has a golden and bright blue color. The shop “Golden Fish” is open on the territory of the plant, where you can buy fresh fish. In addition, everyone can take part in trout fishing. And in a small cafe on the farm serves a variety of trout dishes.

Museum of retro cars in Gelendzhik

Located in the village of Arkhipo-Osipovka Gelendzhikdistrict. In the museum's collection there are only 15 cars; nevertheless, in just one year, it has become quite a respected attraction of the Black Sea coast. Here are the "Lincoln Continental" of 1977 and the "Mercedes" of 1930, as well as samples of the domestic auto industry: "Zaporozhets", "Volga", and the matchless "morgunovka" from the cult Soviet film "Operation" Y "and other adventures of Shurik ". The museum also contains exhibits of modern tuned cars.

Abrau-Durso is not only the birthplace of the well-knownRussian champagne, but also a storehouse of ancient legends and adverbs. A beautiful view of Lake Abrau and the picturesque mountain slopes opens as soon as you turn right from the Novorossiysk highway. The quality and quantity of produced drinks Abrau-Durso is not inferior even to the elite varieties of Italian and French wines. Abrau and Durso are two different villages and are separated by a seven-kilometer road of mountain serpentine, but they are united by a valley where the best grapes of Krasnodar Territory are grown. In the museum of champagne you can learn old traditions, which are still sacred in the wine business: even turning bottles here happens only with women's hands. Among the well-known Russian brands of champagne of various years of aging are presented here “Millezims”, brutas “Imperial”, “Dravini”, “Russian champagne” and, of course, the famous “ABRAU”.

Among exotic sightsKrasnodar Region is one of the most famous - an aquarium terrarium located in Sochi. Since 1989, more than 200 species of fish, reptiles, birds and amphibians (lizards, snakes and crocodiles) have been living in the aquarium. The main favorites of tourists are the reticulated python 4 m long and weighing more than 50 kg (who is still a “teenager”), a rainbow python, black piranhas, Jaco's parrot, iguana and black-tailed rattler. It was in this place that many zoological TV shows were filmed - for example, Nikolai Drozdov's Animal Life or Pavel Lyubimov's The Traveling Naturalist.

On the threshold of the mountainous Caucasus (Anapa region)The Sukko Valley is a picturesque landscape. The Sukko River, which does not dry even in summer heat, is framed by centuries-old trees: immense oaks, elms, willows, beeches. Thanks to the groves of pine and relic juniper, the air here is filled with fragrant resins, which are known to have a beneficial effect on the respiratory system. Small pebble beaches, crystal clear water, sea air saturated with iodine, mountains and mineral waters give a special uniqueness to Sukko. This area is also famous for the fact that it is the only place in the Kuban where half-meter-high marsh cypress trees grow, their homeland is Mexico.

Ice Palace "Iceberg" in Adler was built in2012 It consists of an ice arena and a training skating rink for figure skating. Famous competitions took place here: Russian figure skating championships 2013-2015, figure skating and short track 2014 Olympic Games, etc. The capacity of the arena is 12 thousand people. The building is extraordinarily beautiful: the facade of an indoor ice rink has a wave-like shape and is sheathed with stained glass windows of several shades of the sky blue. In this case, the entire object has a collapsible design: it can be easily dismantled and transported to any point of the globe.

Located in the north of the Taman Peninsula,Temryuk district of Krasnodar region. This place is located in the village of Golubitskaya (another name is Anapa Blue Sopka). The volcano itself is more like a lake, and moreover a healing one: streams of mud come out from the bottom. Diving in the volcano is not desirable, you can get stuck here, and it is not recommended to be in the “healing” crater for more than 15 minutes. A fascinating factor is that the volcano has no bottom, and a special density of clay gives a feeling of weightlessness. Tourists come to this place because blue clay is known to be famous for its healing properties: it cleans the skin, strengthens hair, etc. And already twenty steps from the crater there is an opportunity to plunge into the refreshing water of the Sea of ​​Azov.

More recently, the cruiser "Mikhail Kutuzov" wasa real warship, being in the composition of the Navy of the USSR. Now it is a branch of the Museum of the Black Sea Fleet and the famous landmark of Novorossiysk. The ship itself is considered a masterpiece of world shipbuilding and has an impressive history of combat service. The floating museum is located near the central promenade, in the passenger port. Inside, it looks like a tangled maze, so tourists are advised to visit it along with a guide. Read more about Cruiser Mikhail Kutuzov. 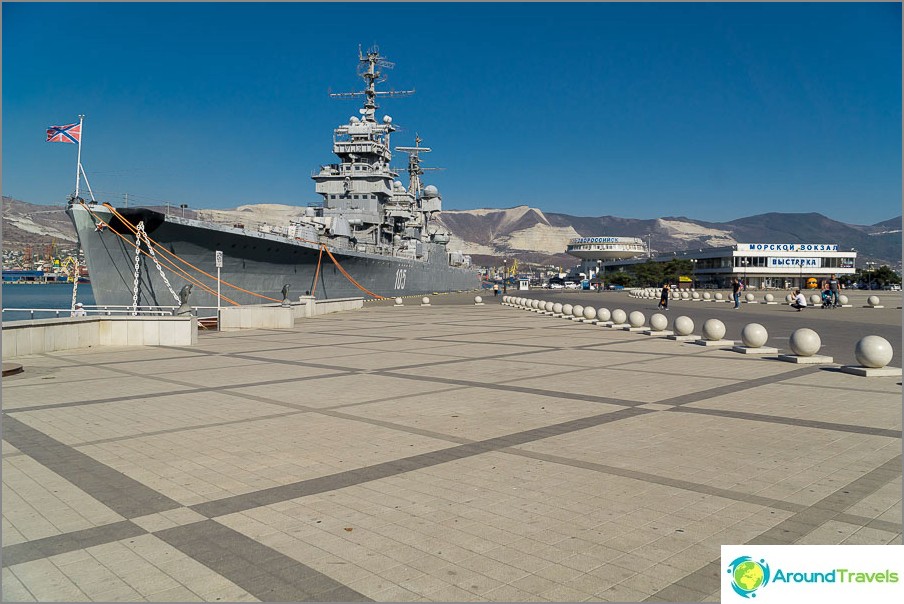