Nizhny Novgorod is a great place togo for a few days to walk along the embankments, enjoy beautiful views of the confluence of the two rivers, walk through the museums and the Kremlin, take a ride on the cable car. For a cursory inspection enough for a couple of days, that is, the weekend.

Despite the fact that you can get from Moscow almost in 3 hours, it is better to go overnight, so as not to arrange a race on the spot and take a walk at a relaxed pace. I have a separate post - A selection of cheap hotels in Nizhny Novgorodjust for the occasion.

For those who want to save preparation timeto travel and dive more fully into the atmosphere and history of the city, I would recommend using the services of a private guide in Nizhny Novgorod. In my opinion, individual tours are much more interesting than organized tours with their large number of people and a hackneyed program. Especially with a private guide, you can always agree on a convenient time and day for you.

Look below, selected author's excursions, you might like something. First of all, pay attention to the tour "Nizhny Novgorod Kremlin and other brands."

What to see in Nizhny Novgorod

This pedestrian street in the city center can becall the "Nizhny Novgorod Arbat". There are many historical houses, cafes, street musicians, souvenir shops and expensive boutiques. Old buildings are interspersed with small sculptures. For example, a cat and bronze pigeons, shoeshine and policeman. There is such a street in almost every large European city: there are many artists, musicians, artisans, souvenir stalls. Airborne music and the subtle smells of food, the motley crowd and architecture create a sense of celebration and euphoria. From the walls of the Nizhny Novgorod Kremlin opensexcellent view of the Volga and Strelka (the confluence of the Oka and Volga). On the walls and the five towers of the Kremlin, you can walk. The area of ​​the Kremlin is more than 22 hectares, the territory is clean and well-groomed, planted with flowers. Here you can see the collection of military equipment from the Second World War. More about the Kremlin. 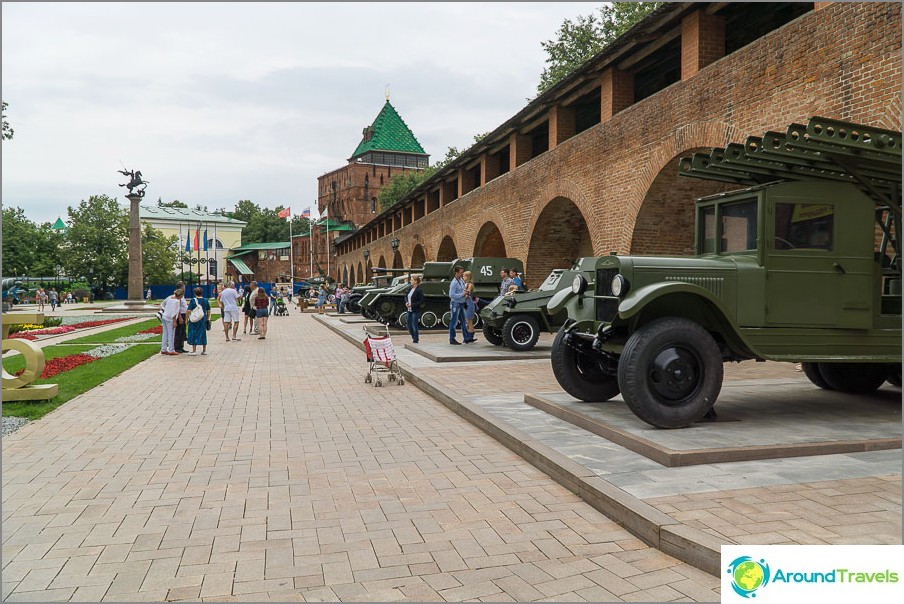 One of the most interesting places in Nizhny Novgorod. Zoo with a large territory, which is divided into several zones. All animals and enclosures are clean and well maintained. Some animals can be hand-fed and ironed. Great variety: from birds to large animals and predators. The zoo will be interesting not only for adults but also for children. On the territory there are cafes and attractions for children.

The staircase has more than 500 steps and connectsMinin and Pozharsky Square with the Volga Embankment. This is one of the main attractions of the city. If you look from the bank of the Volga, at the very top of the stairs you can see a monument to Valery Chkalov, and at its foot there is a monument-boat “Hero”. The ladder was built in honor of the victory in the Battle of Stalingrad. It offers a great view of the confluence of the Oka and Volga rivers, it is a favorite place for walks of the inhabitants of Nizhny Novgorod. 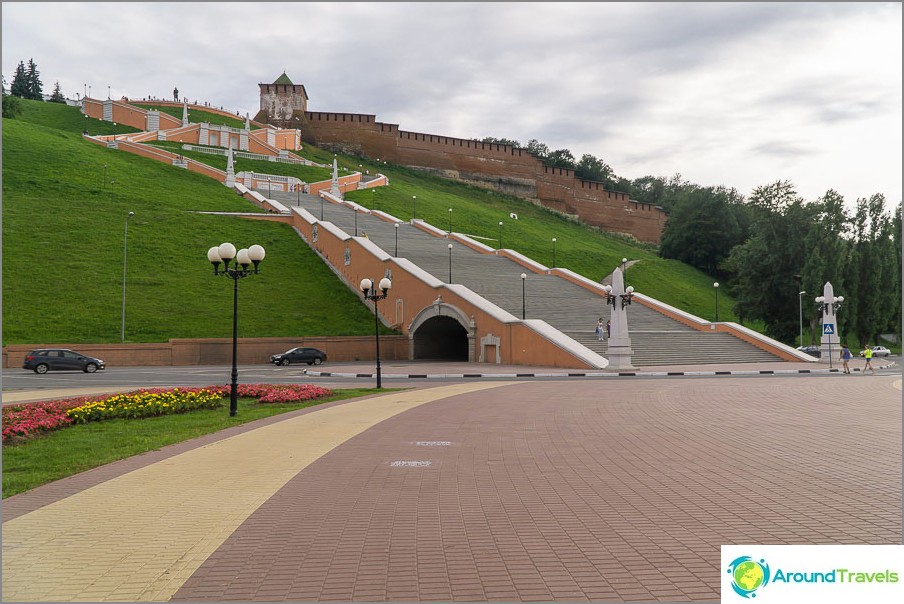 Monument - one of the symbols of the city, is locatednear the Nizhny Novgorod Kremlin, at the beginning of the descent to the river of the famous Chkalov ladder, which has more than 500 steps. From the monument offers a magnificent view of the Arrow, Volga and the city.

The embankment is a pedestriantrack at an altitude of about 400 m above the river. From here there is a magnificent view of the Strelka (the confluence of two rivers), the lower city and the Volga. The views from the embankment of Theodorovsky are picturesque at almost any time of the year, at dawn and dusk, in the afternoon and evening. You can go up to the embankment from the National Unity Square (where the monument to Minin and Pozharsky is located). Pedestrian bridges, a monument to M. Gorky, a quiet and cozy atmosphere make this place one of the best for walking in Nizhny Novgorod. 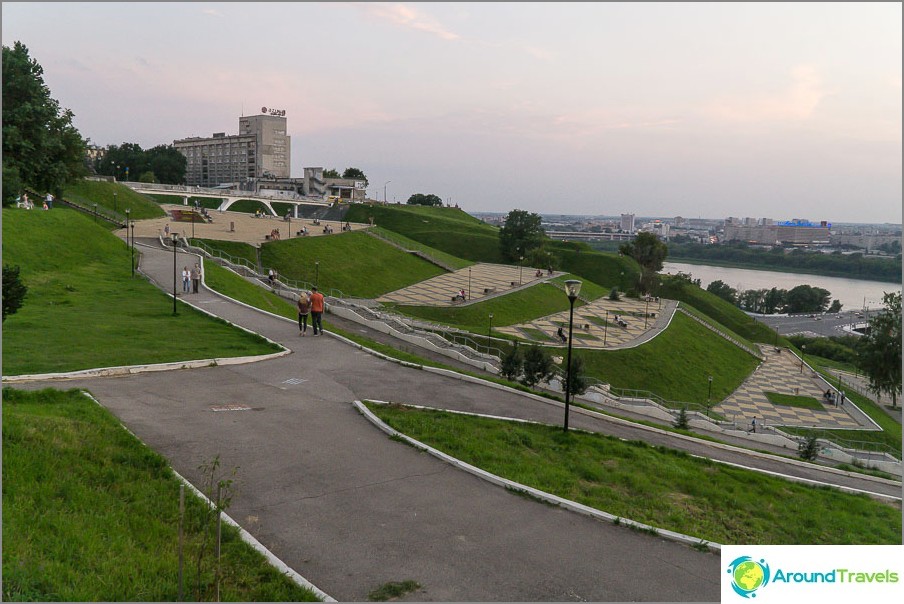 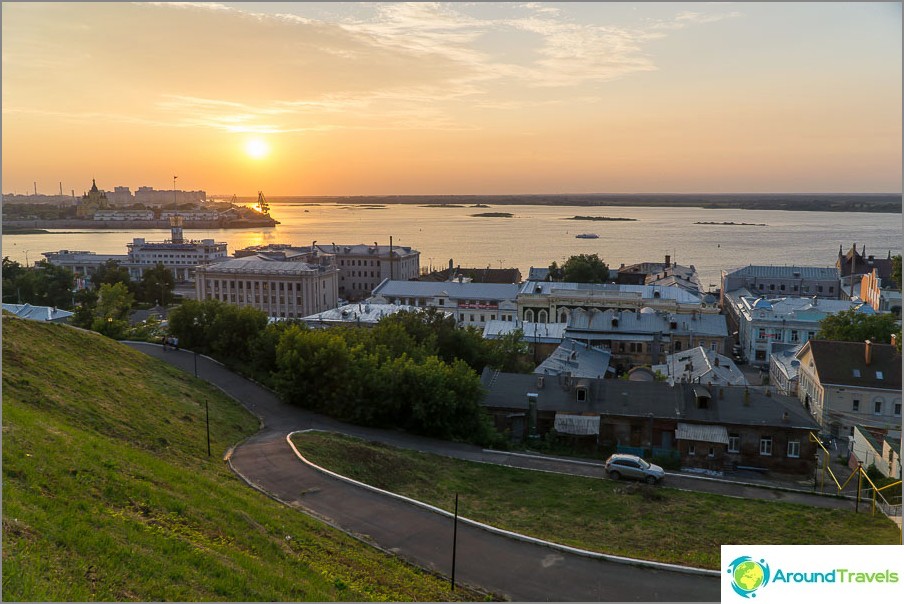 View from the embankment of Feodorovsky

The embankment starts from the monument to ValeryChkalov and goes along the bank of the Volga to the rowing canal. Along with the Fedorovsky Embankment, this is one of the best places for walks and a leisurely promenade with excellent views of the Volga, though through the trees, so it is better to go to the Feodorovsky Embankment or stay on the Chkalov ladder just for the views. Along the street there are ancient buildings with memorial signs. The road connects Volga Highright bank, where the Nizhny Novgorod Kremlin and the historical part of Nizhny Novgorod, with the city of Bor, which is not interesting from a tourist point of view, is located. A one-way trip lasts 15 minutes and costs 90 rubles. For residents of Bora, the cable car is a familiar form of public transport. For tourists, it is rather an attraction. From the cabin of the cable car you can see the rowing canal below, floating baths and islands, backwaters. It is better to use the cable car in good sunny weather, because during strong winds the movement of the booths may stop. More about the cable car. 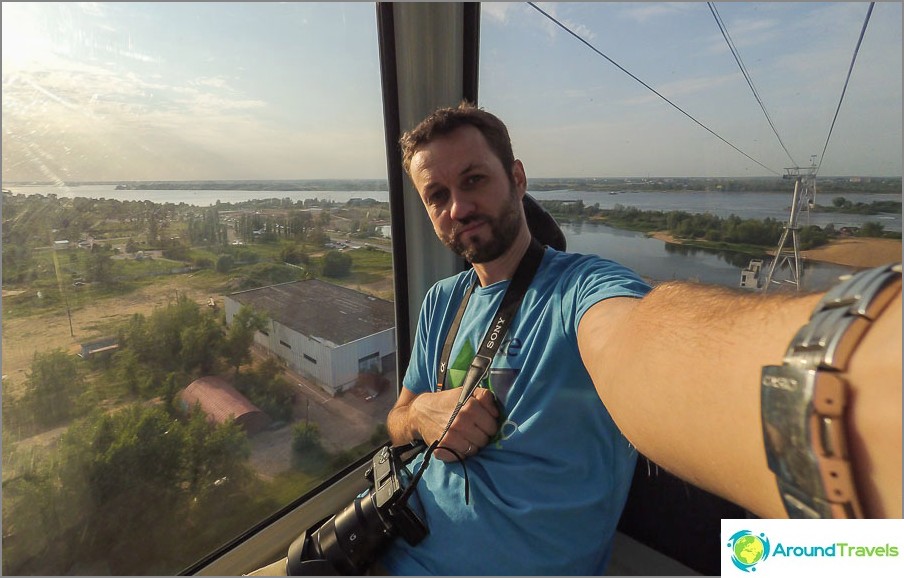 The place where the male PecherskyThe Ascension Monastery, even today, is very quiet, although it is located practically in the center of the city, on the banks of the Volga. Its history began in the XIV century, the monk of the Kiev-Pechersk monastery St. Dionysius, who with several monks came to Nizhny Novgorod and dug a cave near the city. A few years later, the Ascension Church was built at this place. The monastery becomes the most important spiritual and cultural center of the Suzdal Nizhny Novgorod principality, the Laurentian Chronicle is created within its walls by the monk Laurentius. In the 16th century, the monastery was in its prime, but in 1597 it was suddenly destroyed by a landslide, which was considered a bad sign, and the monastery was rebuilt a little further up the river. Shortly after these events began the Time of Troubles. The modern architectural ensemble of the monastery was created in the middle of the 17th century by a local architect. It is interesting that the bell tower of the Ascension Cathedral does not stand vertically, but is tilted, like the Tower of Pisa. The clock on this bell tower is modern, with a fight, playing the melody "God of the Tsar of God". Now on the territory of the monastery is located the diocesan museum, there live several monks who keep the monastery clean and tidy. In the refectory of the monastery you can buy cakes and tea.

Exhibition of paintings by artist A. Yurkov

Alexander Nikolaevich Yurkov (1935–2014) -original Nizhny Novgorod artist and author of the artistic style "Florian mosaic". His paintings are notable for the fact that they are made of dry autumn leaves, seeds, twigs, etc. materials. Art Gallery "Yurkovka" was founded in 1998, became a kind of floristic museum, and after the artist's death, the exhibition moved to the Vystovychny Hall on Minin Square.

This interactive museum will be delighted notonly children, but also adults. A great place to awaken interest in science, precisely in this entertaining form, physics is best absorbed. Inclined room, giant soap bubbles, various physical experiments with electricity, acoustics and gravity will delight most visitors. You should spend about three hours visiting the museum, especially if you are with children.

It is rather not a museum, but a small exhibition of 14steam locomotives. There are both passenger and freight. Locomotives can be viewed free of charge, they stand on the open air. The exhibition is located on the outskirts of Nizhny Novgorod. Around the locomotives laid tracks. True, not all locomotives can be climbed, the entrance to some is brewed. This makes the exhibition not as interesting as it could be if it were an organized museum.

The museum is located in a forested area, onThe territory of the “Shchelokovskiy Farm” consists of monuments of wooden architecture (izba, barns, mills), which were collected from various districts of the Nizhny Novgorod region. The houses are carved with authentic interiors. There is a club of historical reconstruction at the museum, holidays, and festivals are held.

An interesting private museum of ancient technology andvarious technical devices. Now the museum has more than 2000 copies, and it began with an ordinary caliper. A tour of the museum lasts about three hours, all the exhibits are in working condition, everything can be touched: you can start the machines, listen to the unique phonograph, gramophones, gramophones, playing rare records.

One of the youngest museums in Nizhny Novgorod,located in the building of the XIX century, where in the past world-famous photographers Andrei Osipovich Karelin, the founder of artistic photography, and Maxim Petrovich Dmitriev, the founder of journalistic photography, worked. The museum holds not only photographs, but also daguerreotypes, negatives, postcards, copies of old photographic equipment, illustrating its development, etc.

On Markina Square was installed not so long agoan interesting art object called “The Arch of Kisses”, but the people call it simply “electric vitamins”. It looks like a small white arbor on a pedestal. From the tablet next to the monument you can find out that this work of modern art is devoted to the "electrical nature of human relations." To the arrow deflected to the maximum value, it is necessary that the palms were slightly wet. By the way, the measuring scale on the reverse side has more values. 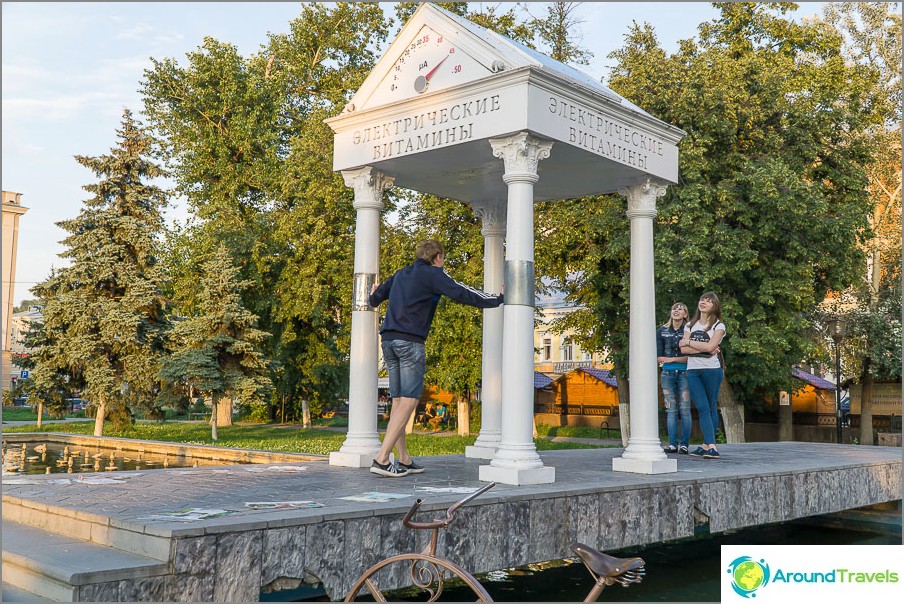 Impressions of Nizhny Novgorod - the move is not ...