I know Warsaw is not very popular among touristsbecause visually it does not look as remarkable as other European capitals. However, it must be remembered that it was completely destroyed during the war, and subsequently restored. In general, it has something to see, but the choice is not very large, 1-2 days will suffice.

We somehow lived in Warsaw for 3 months. This is a convenient and relatively comfortable city. We liked it, maybe come back here again.

To quickly plunge into the culturecity, it is easier to take an individual excursion. Guide can ask questions, he will show and tell the most interesting. Especially true if you are limited in time and come literally for 1-2 days, and at the same time do not want to spend time preparing.

Look at the various options for copyright ex, maybe something will suit you.

What to see in Warsaw

The center and heart of Warsaw, akin to Red Square inMoscow or Maidan in Kiev. The Royal Palace of the 17th century is also located here. The palace is open for visiting the art museum. In the center of the square is the column of the third Sigismund. Nearby is the Cathedral of St. John, where the Polish kings were crowned to the throne and various holidays and ceremonial ceremonies were held. The ancient streets of the Palace Square create a unique flavor of the old city: everything is imbued with the atmosphere and the spirit of history. Not in vain, the Royal Palace is listed as a UNESCO World Heritage Site. Read more about the old town. 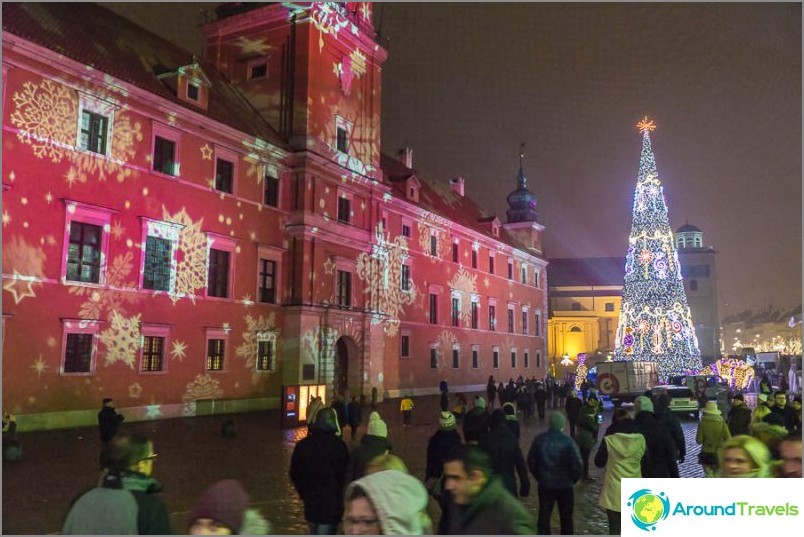 This is a huge palace and park complex,spread over an area of ​​76 hectares. The park was laid out in the 18th century on the site of a wild forest that was once a hunting ground. The complex includes a number of pavilions, castles, spatial, landscape compositions. Here and the palace on the island (the palace of the last king of Poland Stanislav August Poniatowski), and the Myslevitsky palace in the style of early classicism, and the old greenhouse, and the Hermitage, where the royal collection of painting, sculpture and numismatics is presented. The park also houses the Diana Sanctuary, built in 1822 in the style of ancient Greek architecture. Warsaw residents come here to wander through the alleys and paths of the picturesque park. And tourists - to admire the miracle of a three-century history: Royal Lazienki combine the 18th-century Royal Park, the 19th-century romantic park, and the 20th modernist park. Read more about the Лазazienki park.

Entry fee: entrance ticket to museums Лазazienok for an adult visitor costs from 5 to 10 zł. The cost of one-day tickets for visiting all museums in the summer time is 25 zł (in winter - 20 zł). On Thursdays - for free. 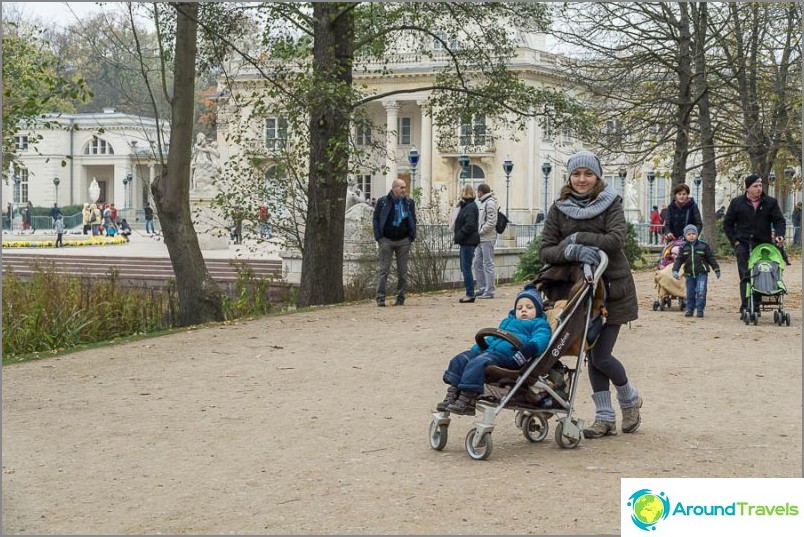 It was founded at the end of the 14th century and throughoutThroughout its history, it had an unchanged form: there were always fairs, folk festivals, holidays. Most of the old buildings were destroyed during World War II and reconstructed in recent decades. On the square is one of the most famous sights - a sculpture of the Warsaw Siren, the symbol of the city. Also here are the House of Culture, the Museum of Literature and the Historical Museum.

At the end of the 17th century, this castle was built forKing Jan III Sobieski. The palace has a long and interesting history: he changed many aristocratic masters, each of whom made his own changes in the architecture and structure of the palace. Elizaveta Sinyavskaya, Augustus Strong, Jan Sigmund Deibel, Isabella Lubomirska, Princes Potocki - this is an incomplete list of celebrities who lived in Wilanow Palace. Now there is a museum with an exhibition of portraits of Polish monarchs from the 16th to the 19th century. The palace is surrounded, as usual, by a beautiful garden on two levels, with a lake and a cascade stream.

Located on the Market Square in the Old Town. Located in eleven houses, has three ancient courtyard. The main museum expositions are devoted to the history of Warsaw. It was opened in 1939. The exhibits in 60 rooms tell about the history of the city and the townspeople from the moment of the origin of Warsaw to the present day.

Entrance fee: about 9 zł per adult.

Palace of Culture and Science

It was built in 1952-1955 by the idea of ​​theJoseph Vissarionovich Stalin as a gift of the Soviet people - the Polish. It is the tallest building in Warsaw: 237 meters and 42 floors. There are also many institutions: libraries, theaters, a post office, museums, company offices and even the Polish Academy of Sciences. Huge rooms for conferences, concerts, performances and expositions, and, of course, an observation deck, where you can admire the view of the city. In 2000, on New Year's Eve, the second largest clock in Europe was opened at the top of the building. Today it is the highest tower clock in the world. Views from the 30th floor.

Entrance fee: from 18 zł per adult. 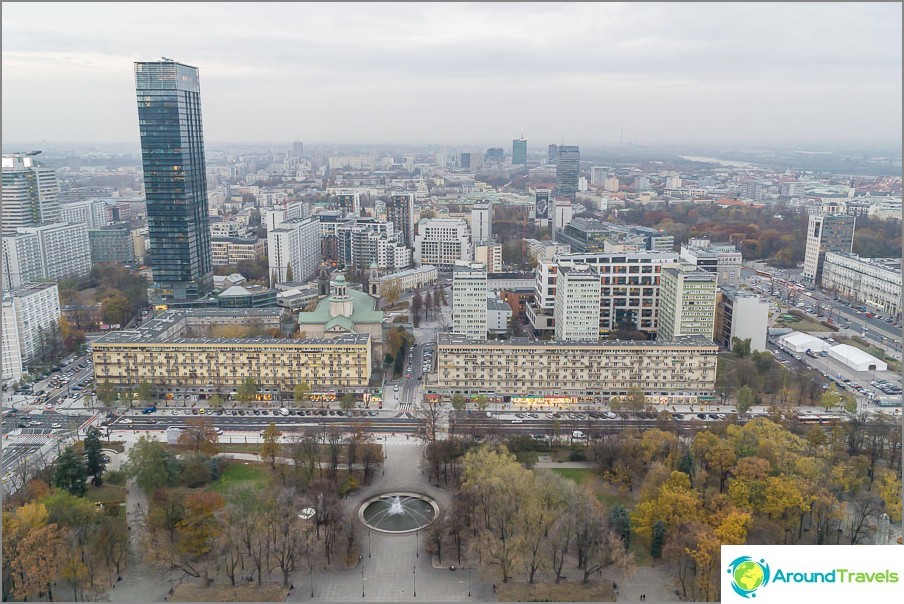 Views of Warsaw from the 30th floor

Krakow suburb - one of the most famoustourist routes of Warsaw. To explore all the attractions of this place, it takes more than one hour. The avenue starts from the Castle Square and leads to the south, connecting the modern center of Warsaw and the Old Town. Walking through the Krakow suburb, you can see the Kazimirovsky Palace (University of Warsaw, known throughout the world), the Academy of Fine Arts, the Church of St. Anna, several monuments and two luxury hotels. The movement of cars on the avenue is prohibited - here you can only move by taxi and passenger buses.

One of the oldest museums in Warsaw, while-equipped in the most modern style. Founded in 1862. In its halls collected more than 800 thousand exhibits in 17 different collections. A number of unique galleries will interest connoisseurs of art and history: Gallery Faras, Gallery of Medieval Art and many others. The largest painting in Poland, “The Battle of the Grunwald” by Jan Matejko, is also kept here. History and respectable antiquity coexist here with ultra-modern lighting and exhibition technology. The building of the museum is an architectural masterpiece in the Art Nouveau style. The museum is located on the banks of the Vistula, next to the park At Xenzhenz.

The center was opened in 2010 with the support ofPresident of the city of Warsaw. This institution combines the functions of an exhibition center, educational institution, research institute and a site for discoveries and experiments. The idea of ​​combining education, popularization of science and the existing scientific center in one project really arouses interest and respect - this confirms the endless stream of tourists. It is worth saying that there is no clear route or program of the visit: the person himself decides what he wants to see and what to try. Help in this will have modern multimedia equipment, electronic signs and generally ubiquitous high-tech. Planetariums, numerous exhibitions devoted to the natural sciences and the world around us, a physical laboratory, a robot workshop, thematic workshops, as well as support for a number of scientific projects have made this place one of the most impressive sights of Warsaw.

Multimedia fountain is a complexhydraulic, musical and light devices, united under the control of a single system. The park is simultaneously a work of art, an architectural complex and a tool for creating a light and sound show. At the heart of the design are two huge fountains, the so-called water organ. 367 nozzles simultaneously emit 30 thousand liters of water. The jets are illuminated by three hundred multi-colored reflectors. All this is complemented by an amazingly beautiful laser show. Multimedia fountains on Pidzamce are located near the Vistula and the Old Town of Warsaw.

What to see in Pereslavl-Zalessky - our walk

What to see in Lazarevskoye and its surroundings - ...