Which card to choose for foreign currency ruble or currency

The same question is constantly repeated incomments, which is more profitable now to take a currency or ruble card with you abroad. By tradition, instead of answering, I decided to write a small and separate post on this topic, especially the answer is not quite obvious, and in fact depends on the specific situation. I will be glad to your add, if any.

Why does this question arise

Now my main card is Tinkoff AllAirlines travel credit card (link 1000 rub as a gift), I recommend. 2-10% cashback can be obtained for travel.

First of all, I must say why this questionarises. The fact is that when buying something on a ruble card or when withdrawing cash in Thailand, there is a double conversion THB => USD => RUB (more about conversion). As a rule, it goes through dollars, but it can also go through euros. So two exchanges = two losses. This has been the case before, but right now during the crisis many were preoccupied with a reduction in such expenses as they had previously turned a blind eye.

But many do not understand that it’s not necessary to be afraiddouble conversion, and conversion rates for it. More precisely, even we should be worried about the second conversion of USD => RUB, which is carried out by a Russian bank, often at a very bad rate. And, if you have issued a card from my map setthen you should not worry too much, since the course will be equal to the rate of the Central Bank, that is, it simply cannot be better. 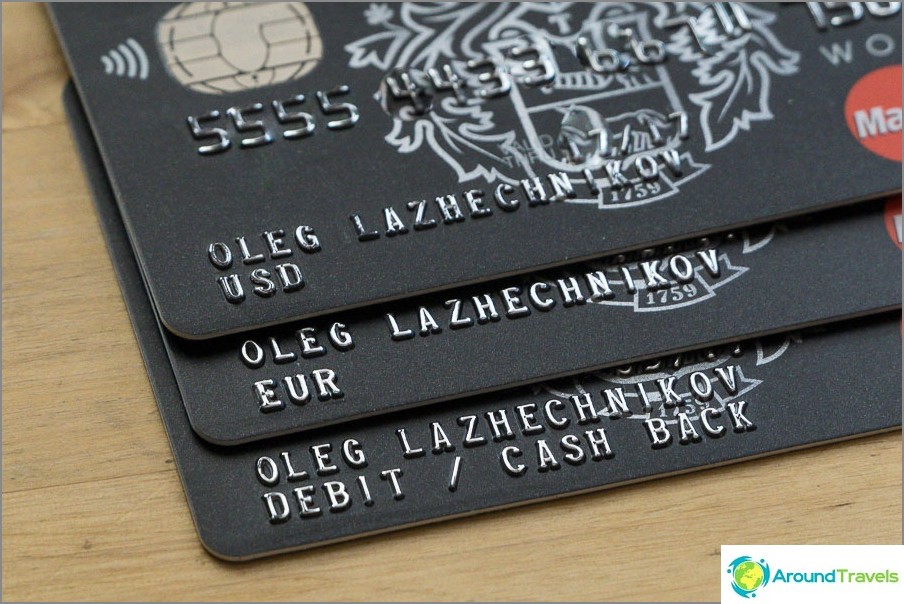 Which card to choose for foreign currency ruble or currency

Double conversion will still be

Of course, it’s better if instead of doublethere will be only one conversion. But for this you need to have an income in dollars and immediately put these dollars on the card. Do many Russian travelers have it? Not.

Then there is a logical way out of this situation -buy dollars in advance, put them on a dollar card and go with her abroad. And on the spot, paying with this card, we will have only one conversion from local tugriks into dollars and everything (for example, THB => USD). Well, or if it is the eurozone, then the euro will be converted into dollars. Although it is better for the eurozone to have a Euro card, then the write-off will be 1 to 1. But this is another question, we will continue to pro the profitability of currency cards.

It would seem that the issue has been resolved, but no. Again, for some reason, not everyone understands that if you initially have an income in rubles, then in any case you make two conversions - one in Russia in the exchanger, changing rubles for dollars, the second abroad. Whatever you do, there will be two conversions anyway! The only way out, as I said, is to get yourself foreign exchange earnings.

Someone may object to me that, they say, the course is alltime grows, so it should still be more profitable to get in dollars at home in advance than to pay with a ruble card. But it is not. Moving on to the next item.

We need both cards - both currency and ruble

If you really want to reduce losseson conversions, then you need both cards: ruble and currency! And use them depending on the current situation, that is, the course. And ideally, maintain a balance in your currency basket, bribing dollars on pullbacks, or selling them at the peak, depending on what is now in your basket is less, dollars or rubles. Or there is still such a thing. But, most likely, very few people will play on the difference of courses, so we will analyze the option for those who do not really bother.

To begin with, I will give a fresh example toit is clear why a currency card is not always profitable. In February 2016, the dollar cost about 79 rubles. Suppose you gathered in Thailand for 3 months and bought yourself $ 4,500 for this period ($ 1,500 per month). You spent at the same time 355,000 rubles. But in March, the dollar exchange rate was 68 rubles, that is, the same $ 4,500 will cost 306,000 rubles already. I think it is obvious that it would have been better to initially buy only $ 1,500 for one month, and since March, already paying with a ruble card just at the rate of 68 rubles. Or, in general, not to buy anything and go only with a ruble, would still be more profitable, provided that the course does not jump again.

There are completely opposite examples whenbuying dollars in advance is profitable. Suppose you buy them at 68, and then all subsequent months, while you are traveling / hibernating, the dollar rate only grows and you thereby save by spending those same dollars at 68.

So a currency card can be, likeprofitable, and no. And that's why you need both cards: currency and ruble with a good conversion rate. Then, depending on the current ruble / dollar rate, you will be able to spend more money economically. If your dollars are too “expensive” (bought at 79, and now they are 68), then you can pay with a ruble card and wait for the rate to rise. If your dollars are "cheap" (bought at 79, and now they are 85 worth), then you can use them. But this must be remembered when and how much it was charged, so there is a simpler scheme: pay a ruble card in the period of the dollar’s ​​growth, and a dollar card in the period of the fall. Although with her the question arises, at what rate were the bucks originally purchased.

I suggest you 3 strategies how to deal with cards when traveling, whether or not to take in addition to yourself a currency card. Heh, a word of some kind of "strategy", in fact, everything is simple.

What currency card to issue

Surely, someone will ask what card to take and I recently studied this question. Search results here. I have Tinkoff dollar and euro cards,with free service, 1% cashback and no commissions. That is, dollars will be written off 1 to 1 in countries with dollar circulation, and there will be one conversion in Tugrik countries = Tugrika => Dollars, without additional fees when paying at the store and withdrawing at an ATM. By the way, cashback for currency cards is very rare.

Also, good currency cards from VTB24 / Sberbank / Homecredit, conversion without fees. Anyways, read the link, so I do not repeat.

P.S. Write which currency cards of which banks do you use and what about the commissions and the conversion rate in the Internet bank. Maybe there is something more beneficial.

Why do I winter in Thailand - the answer ...