The purpose of our first trip to Chiang Rai wasthe magnificent White Temple of Thailand (Wat Rong Khun). It is just a few kilometers from the city of Chiang Rai, we spotted it on the way as we headed towards the golden triangle in chiang saen. The white, iridescent suns tops of the White temple (as foreigners call Wat Rong Khun) are visible directly from the road. Then we came here, traveling by car through the north.

When the view opens immediately the wholea snow-white mirror-carved temple, you understand that you have not seen anything from the road. This kind of fascinates, and there is a feeling that you got into a fairy tale. Of course, the first thing that comes to mind is the Snow Queen's castle. Wat Rong Khun is beautiful, even, perhaps, too beautiful to be just a temple. This is a true work of art. Oleg very aptly compared him with the Tretyakov Gallery. And although the Thais come here to pray, it seemed to us that in terms of energy this place is largely inferior to the same dilapidated old wat in Chiang Saen.

Probably such an impression due to the fact thatfirst, the place is relatively new (construction began in 1997 and, by the way, is still underway), and secondly, because it is very touristy. There were quite a few visitors, although they were somehow evenly distributed over the surroundings and were not very often seen in the frame.

At the entrance to the territory of the White Temple sitsa guard and a sign hanging that, due to indecent behavior (whose, we did not understand), foreign tourists are allowed only accompanied by their guide. We hesitantly trampled in front of the gate, and then still decided to try their luck, stop, so stop. But calmly passed, without being stopped by the guardian of order. 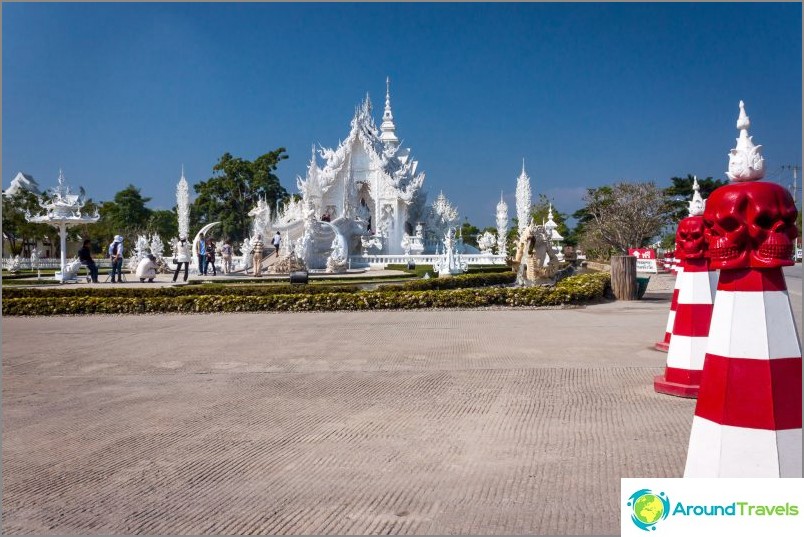 View of the White Temple from the road 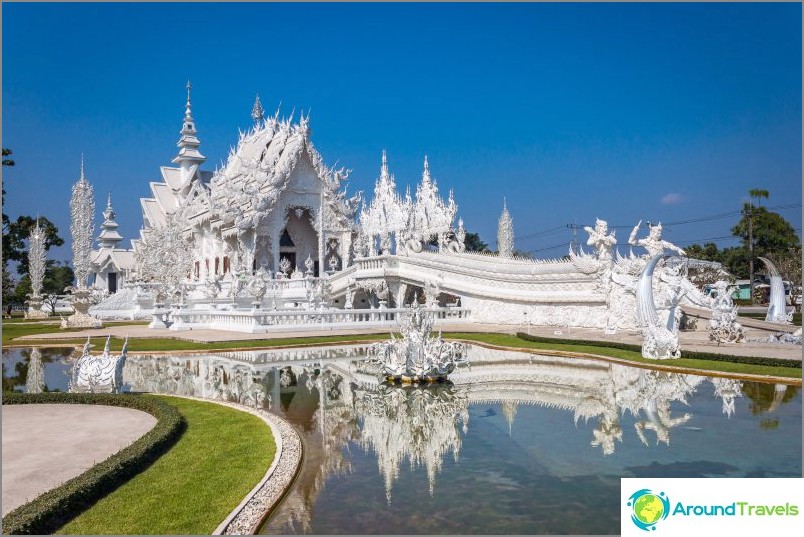 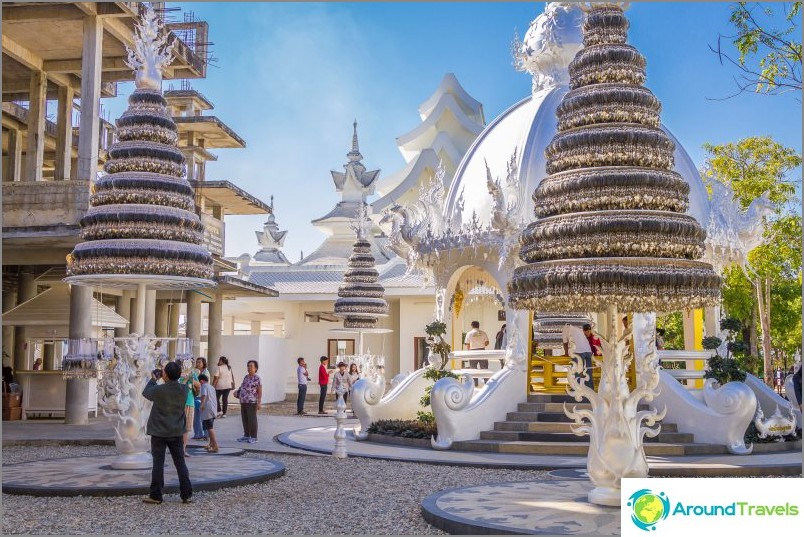 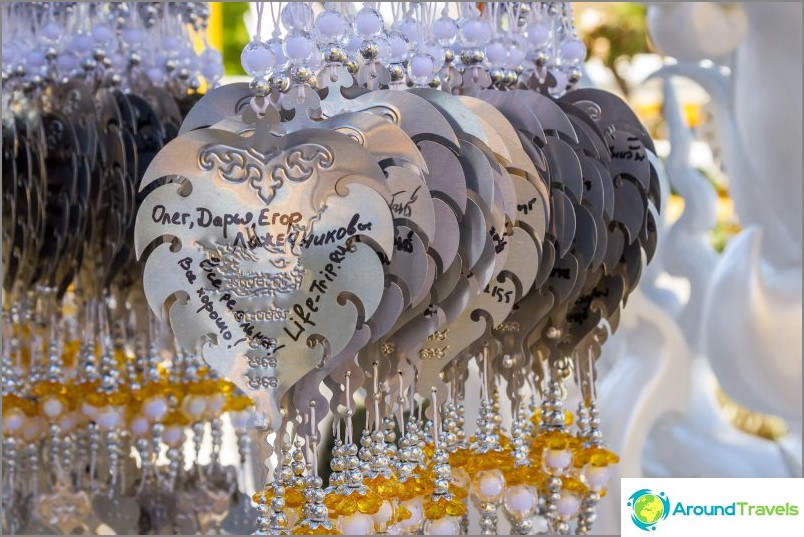 Naturally, I left my 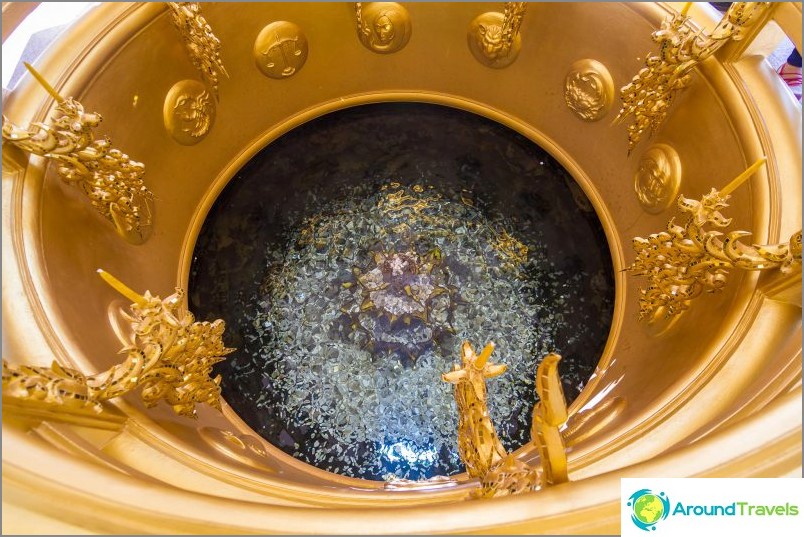 Well of desires, where coins are thrown 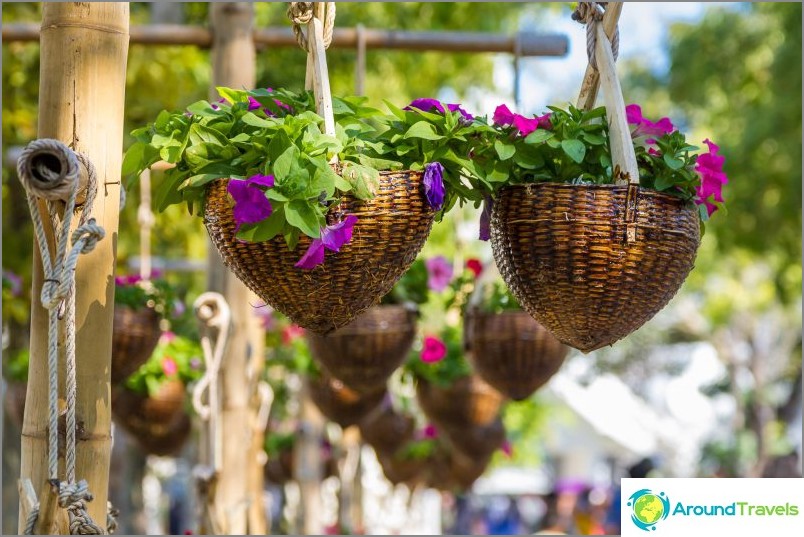 The territory is very beautiful and it gets better every year. 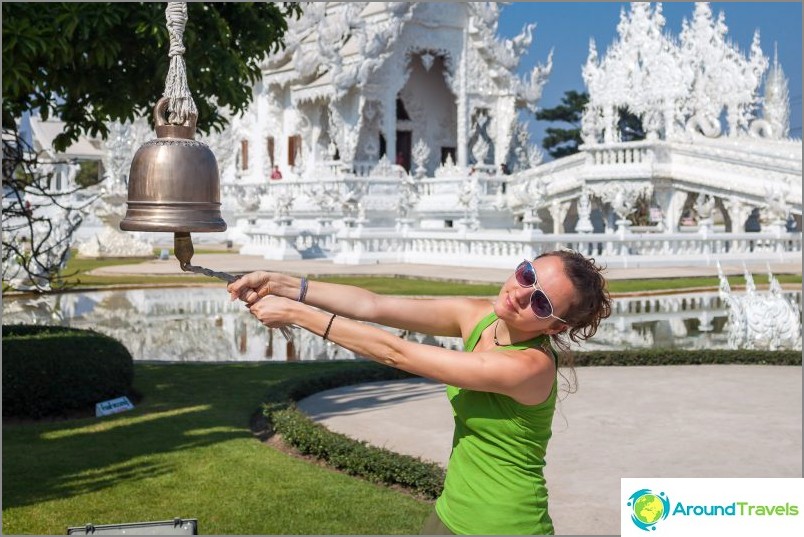 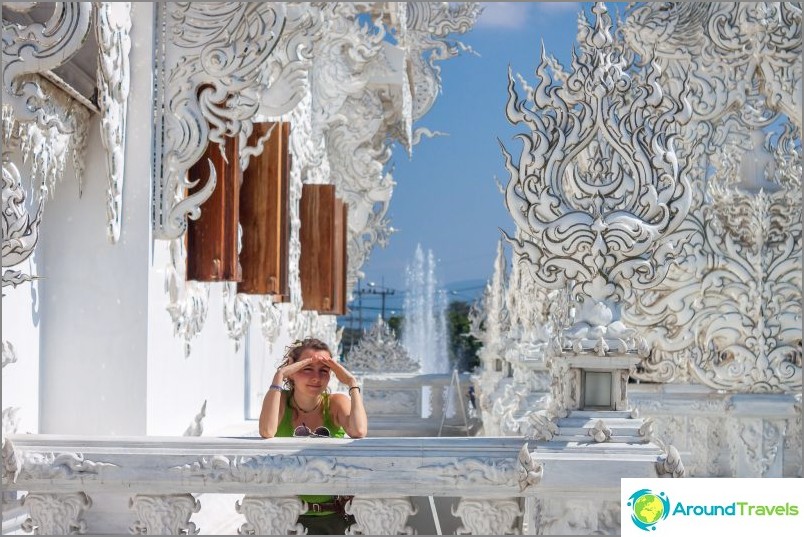 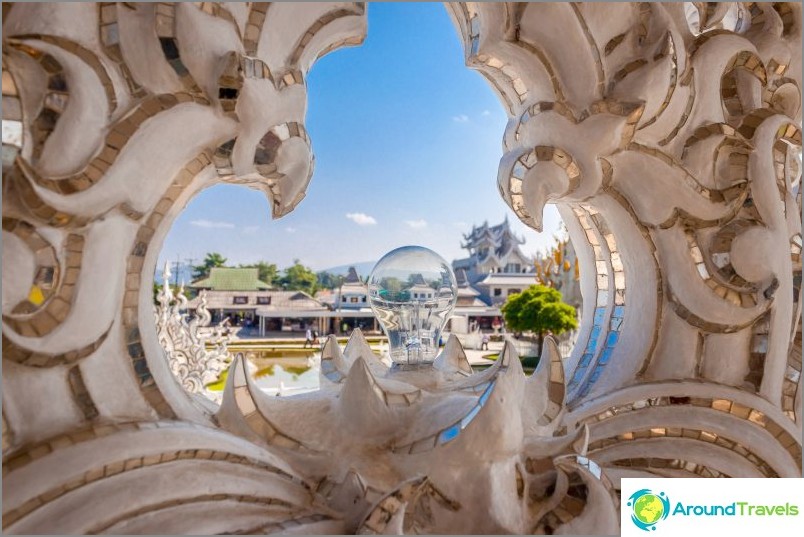 To the entrance to Wat Rong Khun is a beautiful bridge,symbolizing the road to enlightenment, the place where the Buddha lives (in our opinion, simply Paradise). But before you get there, you need to overcome the human world (a small semicircle directly in front of the bridge itself), and then go through Hell with stretching arms of sinners (a large semicircle ending in fangs is the mouth of Rahu). It’s a pity that I didn’t read about everything on the Internet before the trip, it would be more interesting to wander there, understanding what was happening.

And so, we are at the door of Paradise Wat Rong Khun temple. Remove shoes and go inside. And there ... almost nothing. Only the original painted walls and the seated figure of some saint, apparently a monk. I found on the Internet that he was embalmed, like our Lenin, others claim that it was just a doll. I don’t know what is true and what is not, but it looks quite like a living one, which makes it scary. The same there are monks on Samui.

Impressed with the original painting of the walls. We, however, did not understand who she performed. Either the creator of the temple Chalemchay Kositpipat (Chalermchai Kositpipat), or several authors. Preying to someone else's guide with questions, we learned that the painted heroes of the Matrix, Avatar, Terminator, etc. - this is a symbol of the fact that people now mostly live in an illusory world created by themselves, and not in reality, which is not good. Well, about the weapons, rockets, twin towers and the events of the 11th of September, I generally keep quiet.

And, as we were told, painting is constantlyreplenished with various phenomena from our modern life (Avatar proof), so to speak, keeps up with the times. This was done so that later it was clear exactly when these paintings were created, such temporary milestones. One wall, by the way, is generally empty. Interestingly, it will appear on it in years, so, after 50 ... 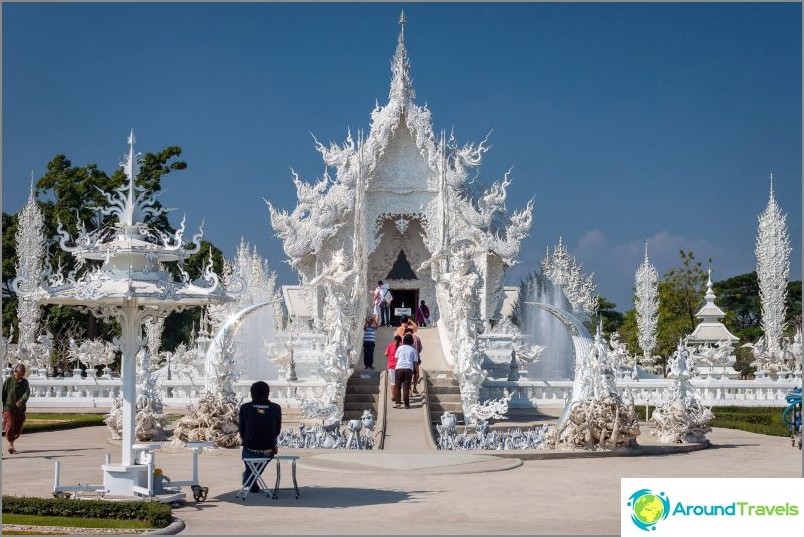 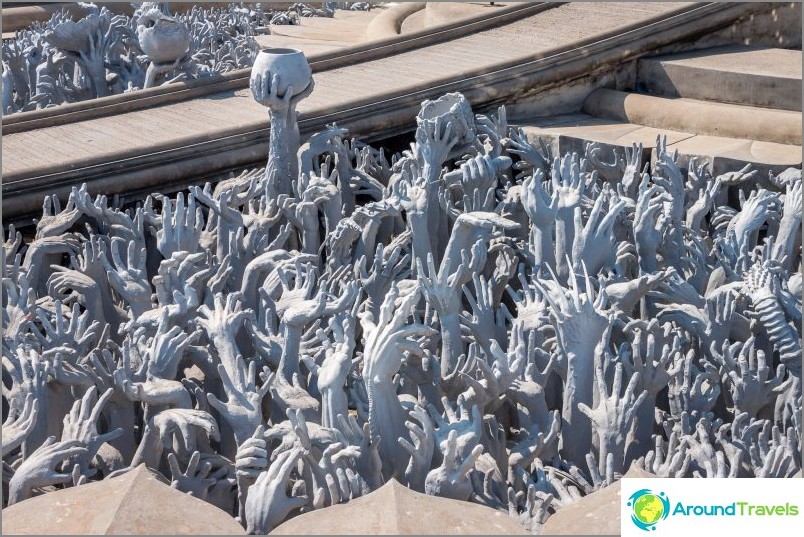 Sinners are pulling hands on visitors 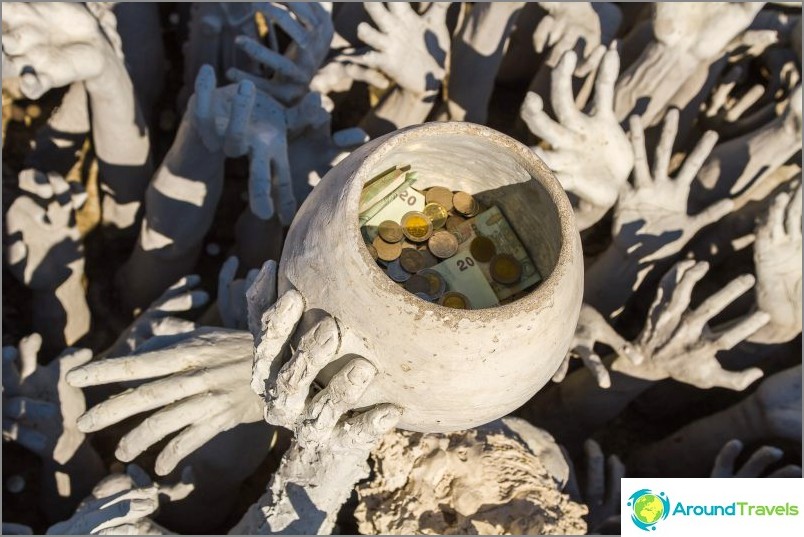 They can try to cajole 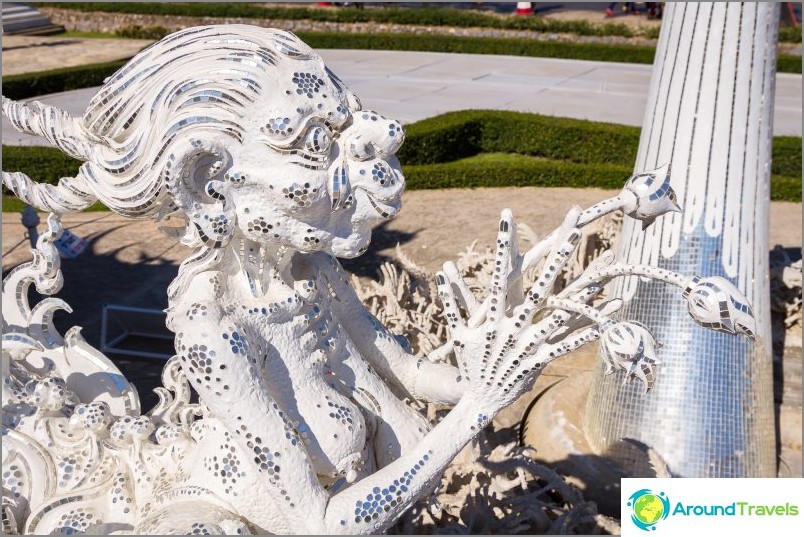 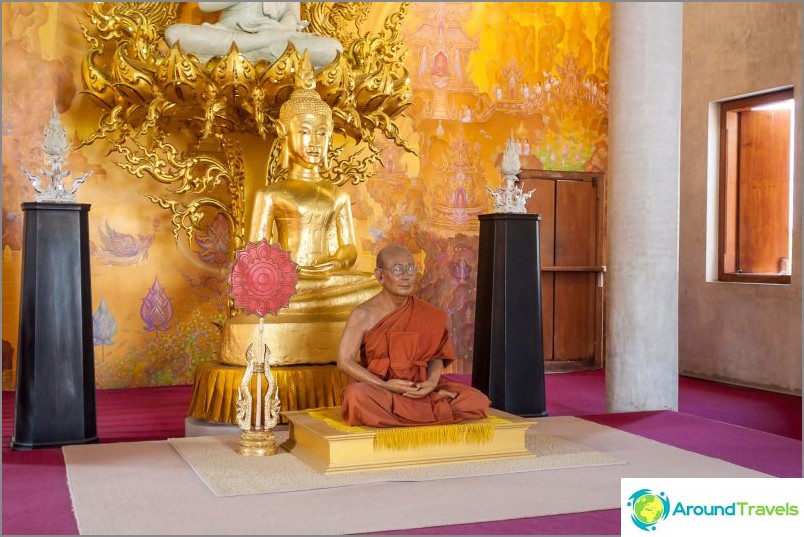 The figure of the monk inside the temple is most likely not a real mummy. 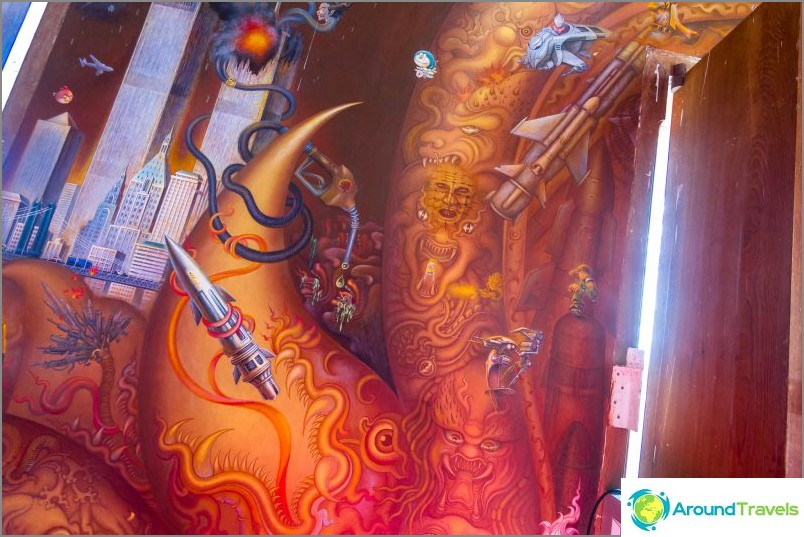 All walls are painted with modern plots. 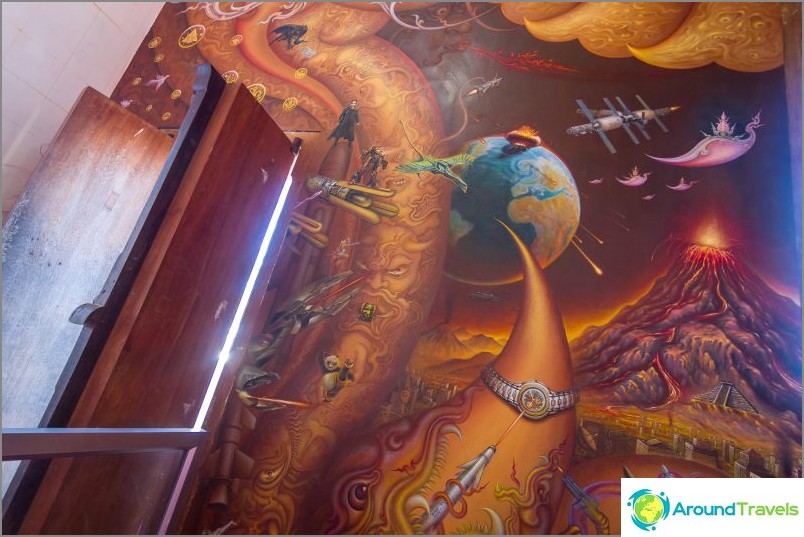 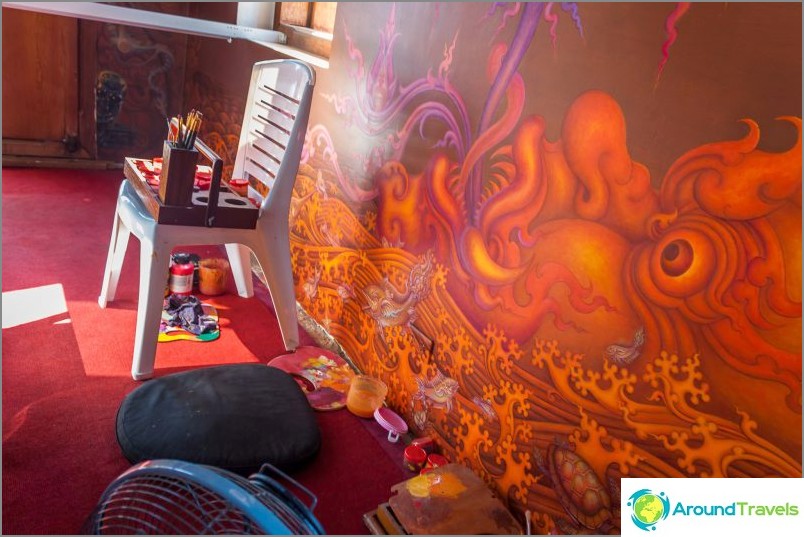 The part is not finished yet

By the way, taking pictures inside the temple is prohibited. We learned the reason later, from one of the drivers who threw us. The drawings on the wall are copyrighted works and for some reason their creator (creators?) Do not want them to be distributed via the Internet.

Construction is still ongoing. This is evidenced not only by the white buildings behind the Wat Rong Khun temple, but also bald, without ryushechek, blanked buildings, as we called them, but also the blanks of the very white-mirror beautiful near the canopy. It was interesting to study how it all is born and created. They say the complex will include nine such amazing buildings. It will be interesting to come back here in 10 years, this is just a fairy tale to be the real one! 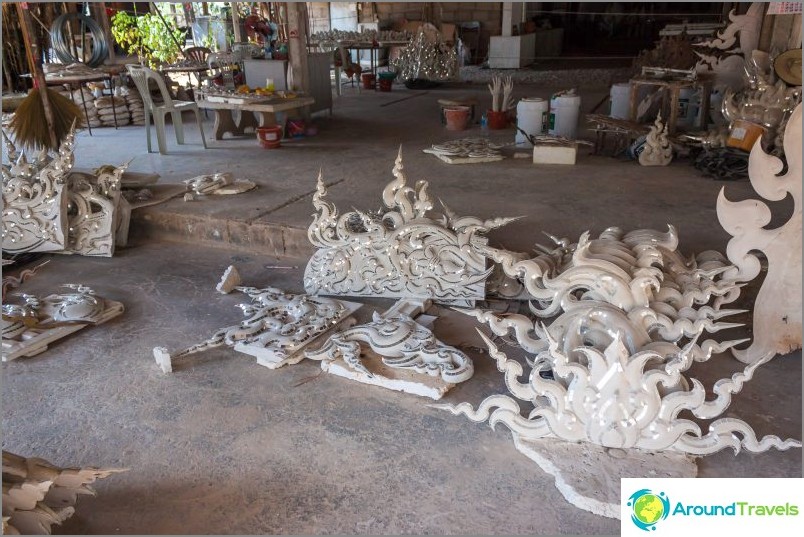 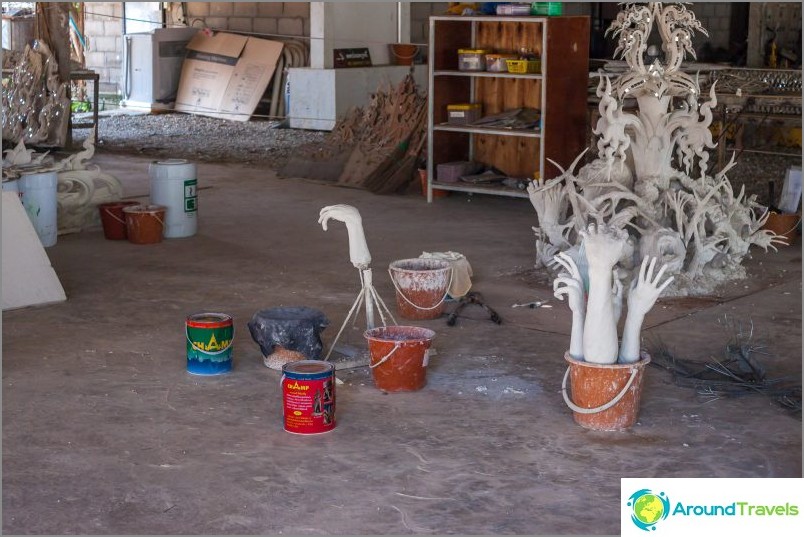 How do you hand sticking out of buckets?

There are various sculptures throughout the whole territory, notless marvelous and original than the white temple of Wat Rong Khun. Each of these sculptures probably carries some sacred meaning, but, unfortunately, we only understood that it’s not at all good for dummies to smoke and drink badly.

Glad that these usThe reproaches and warnings do not apply, we went to study the amazing golden palace building. I wondered for a long time what it could be. And due to the fact that a man and a woman are almost kissing above, she decided that it was some sort of our registry office. Naive, can you imagine what my disappointment was when I read the inscription that terrified me - Toilet ?! Yes Yes! Golden toilet! Mind is incomprehensible! But beautiful, according to the fabulous ... 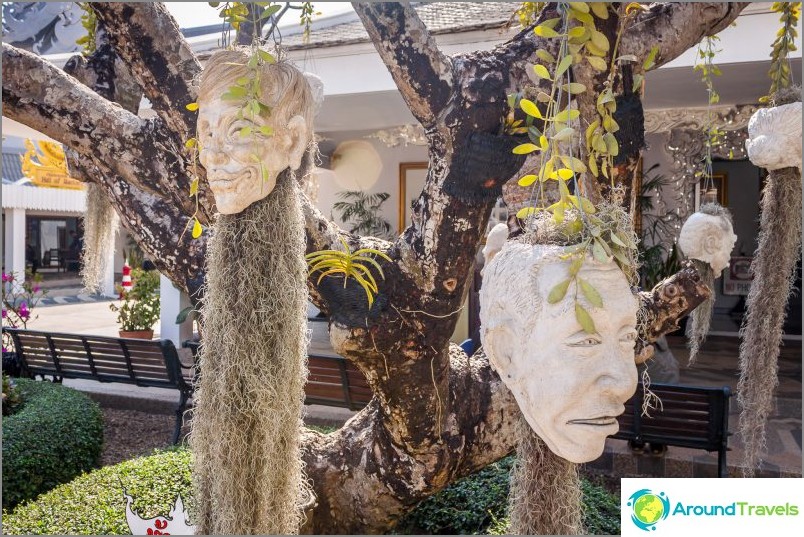 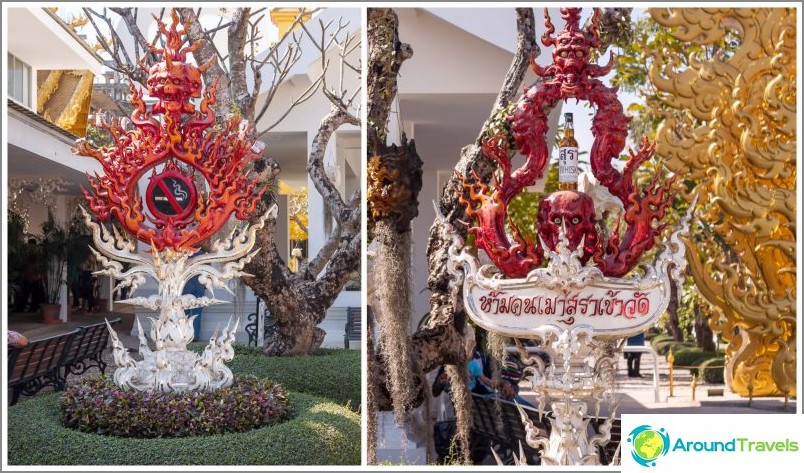 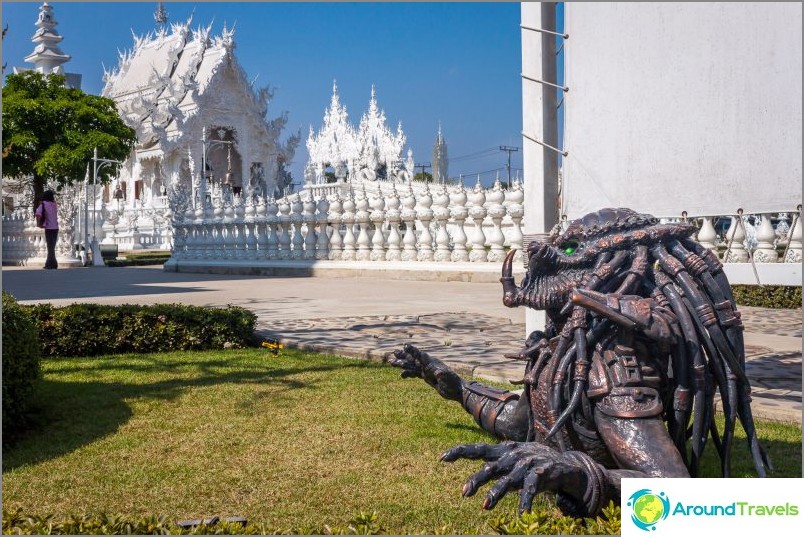 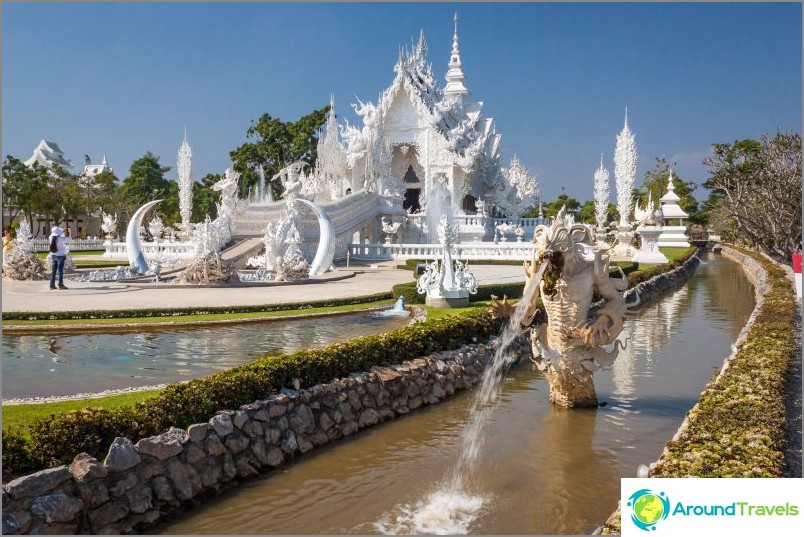 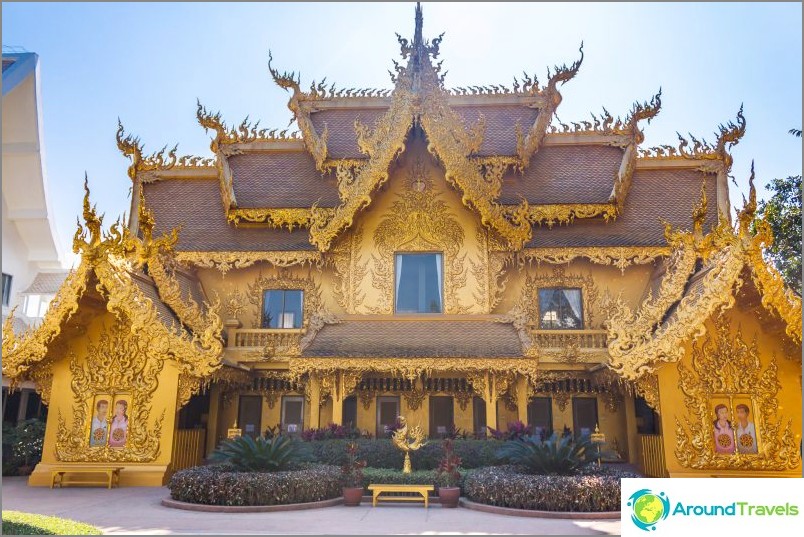 Well, and finally buying a magnet from thisfascinating places, we also studied the Lost and Found display counters with the exhibits presented there - lost things. Do you know what they lose the most? Cases from cameras and caps! But I was struck most of all by the money sealed in bags with the signed amount! And there are many of them.

Open from 7 to 17. During the season (November-February) it is open until 18:00. But since the territory is not very large, you can get pretty close to the temple at any time of the day and make beautiful pictures. It is in the dark that the lights come on and the temple looks especially magical. Well, I mean, even if you drive through in the evening and at night, take a look, there is only 100 meters from the highway to go.

The easiest way, of course, is on a rented car. It allows tremendous freedom in planning and moving around the country. Otherwise, you can take a minibus from Chiang Rai from the old bus station (city center) for 20 baht. Or move from Chiang Mai by shuttle bus or bus from bus station and ask to drop you off the road in front of the temple.

It is convenient to spend the night in Chiang Rai so as not to hurry anywhere. You can see a little the city itself, its central part and visit several attractions in the area, for example, Black Temple, an antagonist to White. Overnight is also convenient if you have a whole trip to the north of Thailand.

I once stayed at cheap guesthouse Baan Nukanong Guesthouse (my review), but it is very simple, not for everyone. Fell in the first available, did not have the strength to look. I think it makes sense to look at something else and book in advance. The easiest way to search for hotels on RoomGuru, there are all the discounts and the most complete database of hotels. Well, you will book more in the future either in Bucking, or in Agoda, which will be offered.

Here are a couple of hotels that I noticed for my next trip: Sirin Place Boutique and Nice Inn Town Hotel and Apartments. Both in the center, with a high rating, quiteinexpensive. In Nice Inn Town in general, very cool Deluxe and Superior (with kitchen). Prices in the north, of course, very pleased. All 2 times cheaper than in the south at the resorts. Use!

Where is the temple

The White Temple is located about 13 kilometers from the city of Chiang Rai, south towards Chiang Mai. Near the main road that connects Chiang Mai and Chiang Rai.

The experience of living at the Tresch Guesthouse on Khaosan ...