Zorbing in Moscow - we ride in the ball

Yesterday's article about consumer society caused about hundreds of comments in one day. So strange, you write about travel, no one comments, you write about your views and immediately a flurry of opinions and criticism. Probably it was not worth me writing about women's clothes, women, like tigresses, nearly broke a new sweater on me. And my wife yesterday, unfortunately, was not there to support me in the comments. On the other hand, such popularity can be counted for success. Can write controversial articles and increase attendance? How long will such a blog last?

I continue on the topic. This time about Zorbing, as part of his post. What to do in Moscow at the weekend. Those who are not interested, you will suffer a little, I just left a paraglider to try and water skiing. 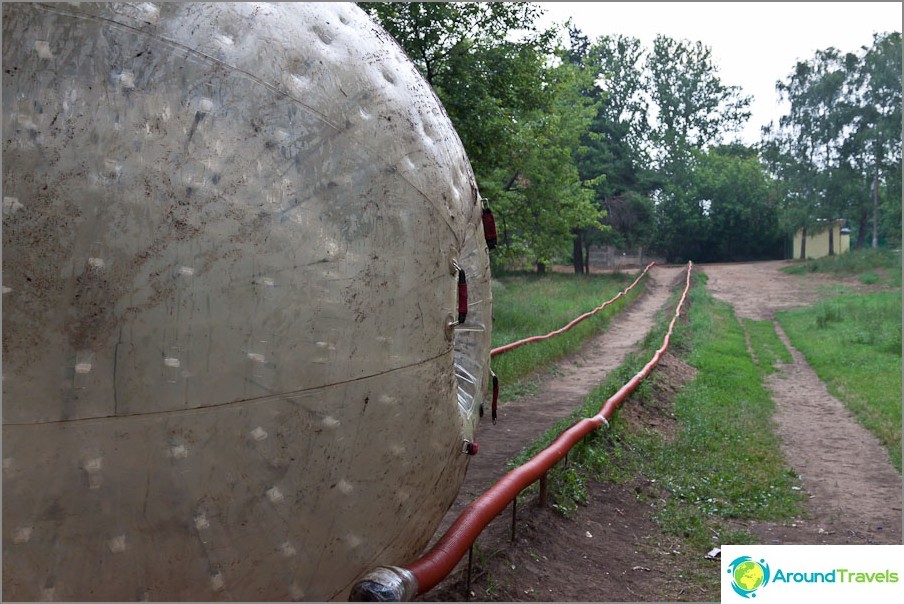 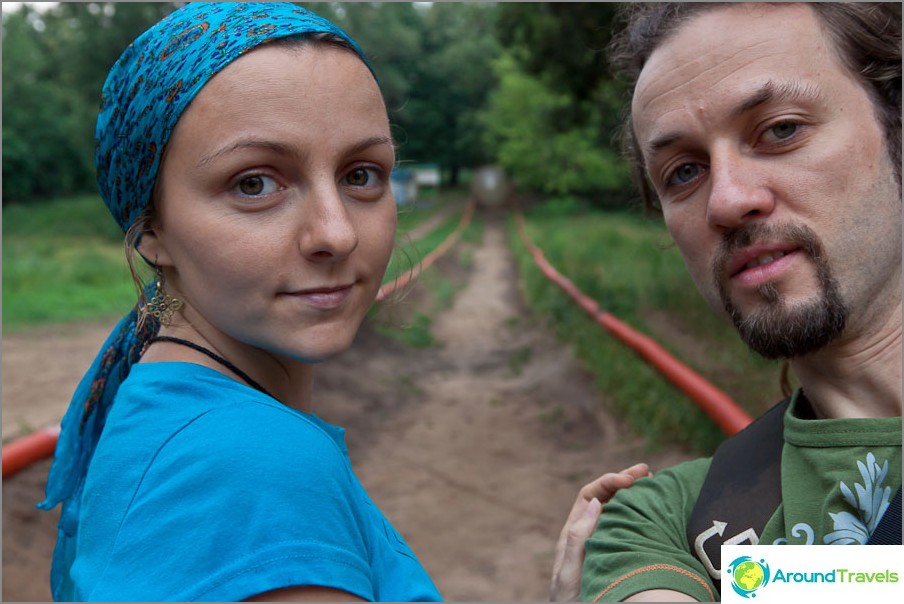 So, I also bought a coupon in Biglion for 300 rub descent in zorb. But on Groupon, too, you can get a discount, when, how.

Zorb is a ball in which a person is inside. Accordingly, it can be rolled up from a mountain in this ball, or it can walk around the lake like that. A zorbing is called the action itself. Here is how!

The first time I saw zorbing in the movie “ArmorGod "with Jackie Chan, can anyone look and remember. I was very impressed then, I was still young. Therefore, as soon as zorbing appeared in Moscow, I decided to try, or am I not Jackie Chan? Although now the people are almost not in the country buying such things. The price of a zorbing ball is about 100 thousand rubles. I've seen cheaper, but they are worse and less durable.

To touch zorb, like a thick film for a greenhouse orsomething like soft plastic. The inner ball is attached to the outer by metal wires. Before lowering the ball is pumped up by a pump. Ball weight 70 kg. 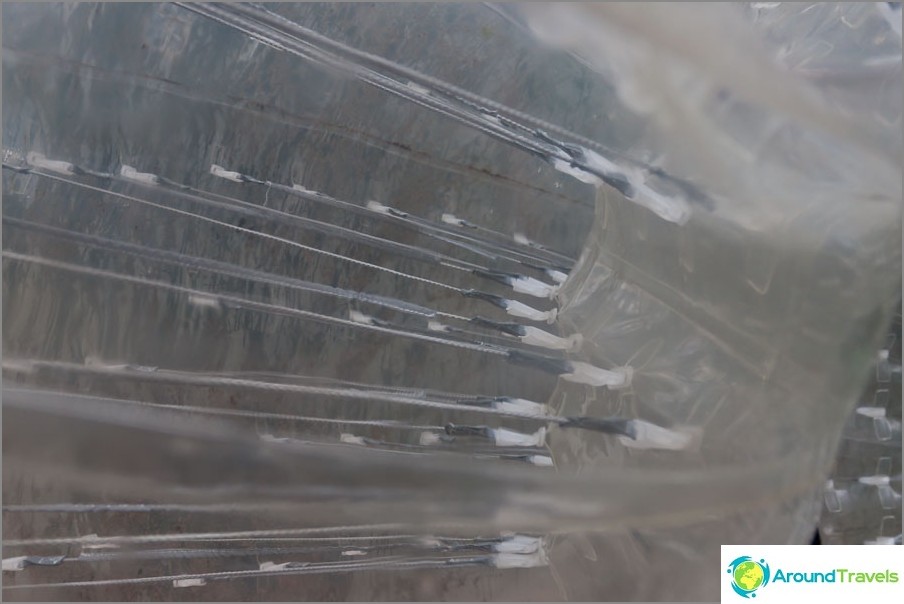 Inside the inner ball is a man (watersingle goiter). And this person, in this case, I, so as not to hang out in the ball during the descent, becomes attached or even, one might say, crumpled like Jesus. Hands, legs, and a bird are tied. For some reason, at first I thought that the inner ball should scroll so that I was in an upright position all the time. But no, the miracle did not happen and I was just spinning along with the zorb. When descending, you do not control the ball, it just rolls blankly. My second mistake is that my head may spin. No, it is not spinning, and the instructor confirmed to me, no one has vomited.

The descent distance is only 100 meters. On the sides are guides, so that the ball will not roll anywhere else. This is enough to understand what the sensations will be. Honestly, they are not very pleasant, or other words are not very comfortable. Flight of the soul is also not observed. And there is no fear either. What is there? And there are just new experiences, unusual 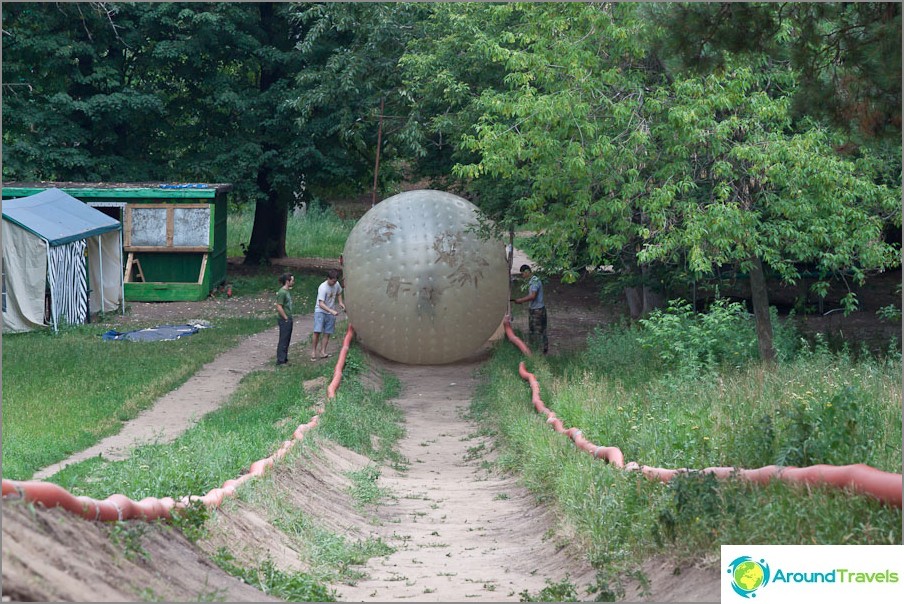 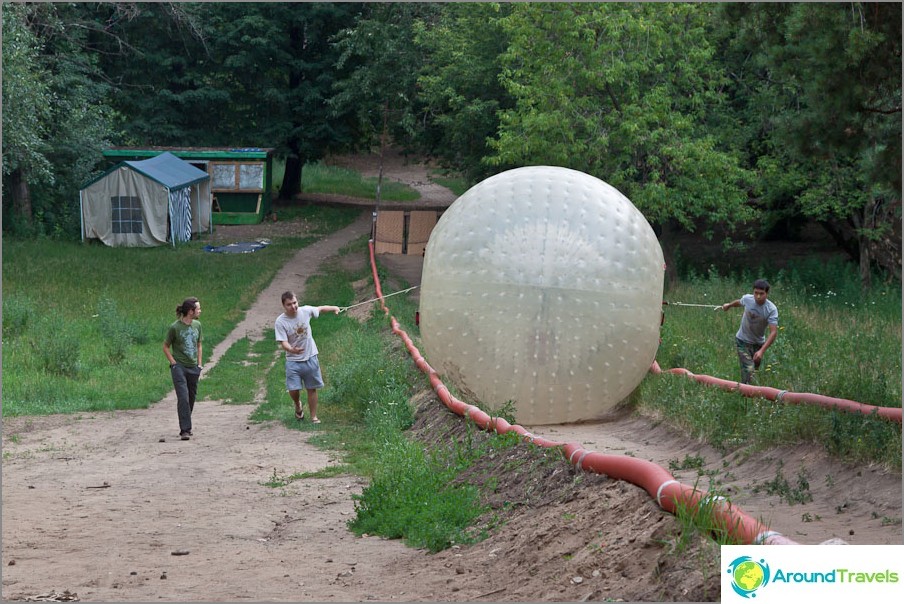 Zorb must first roll up 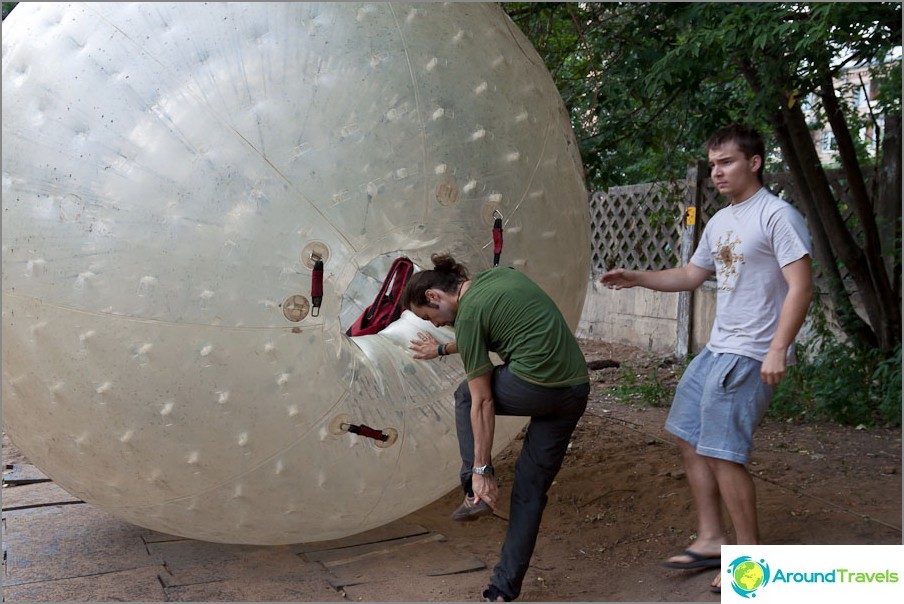 Before getting inside we take off our shoes 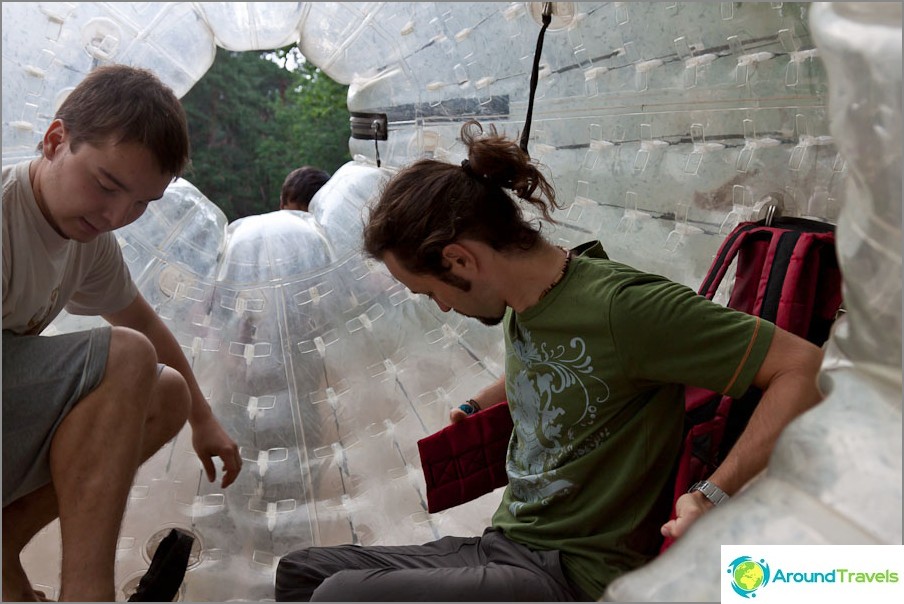 We fix the zorbonavta in place 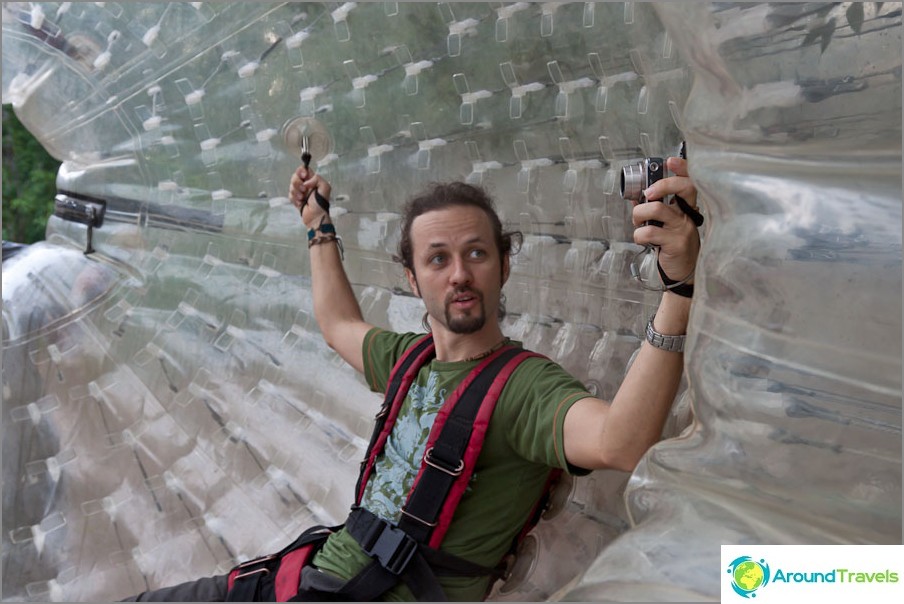 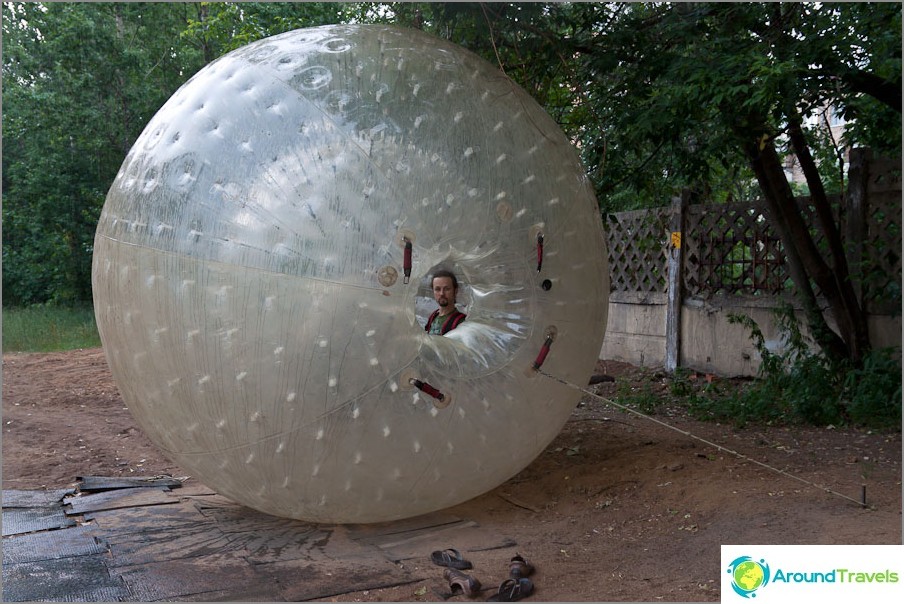 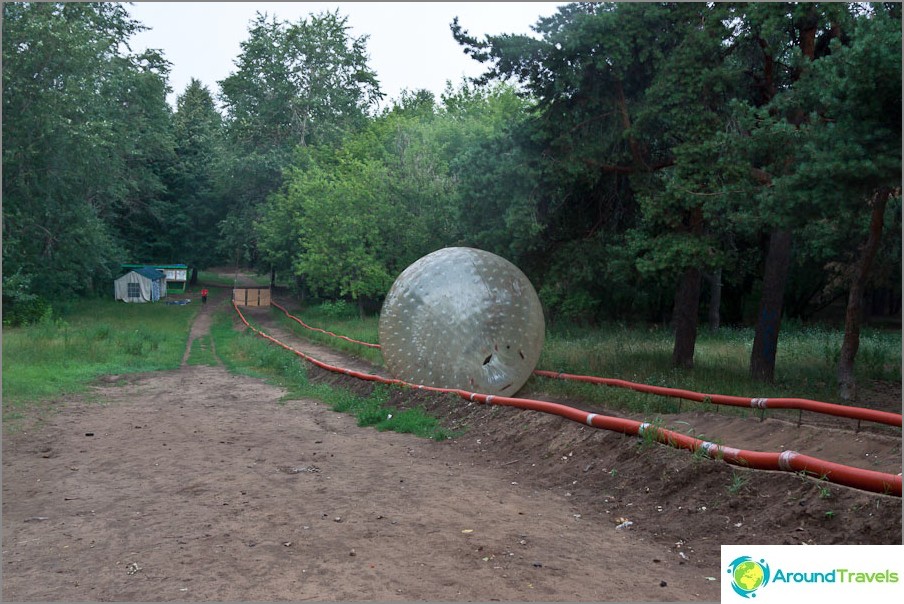 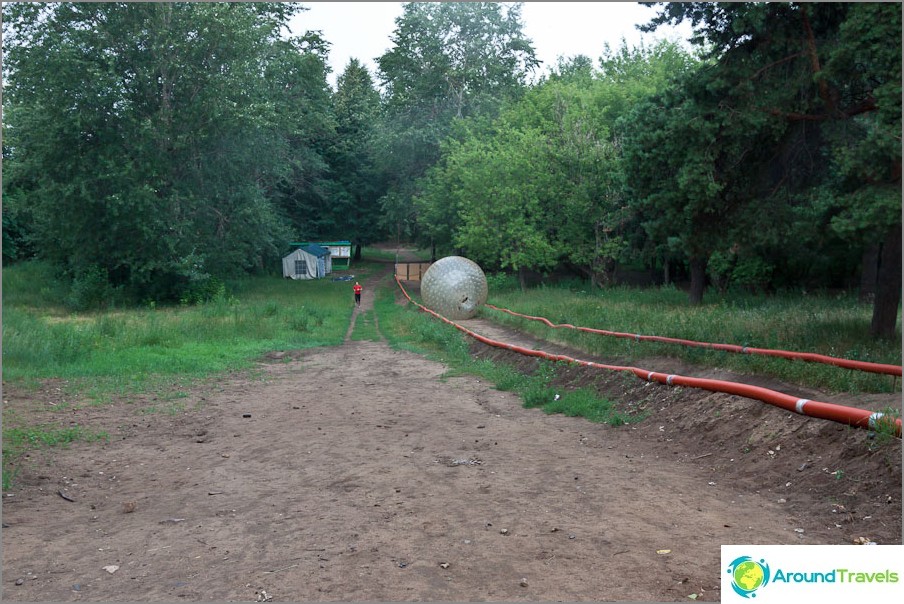 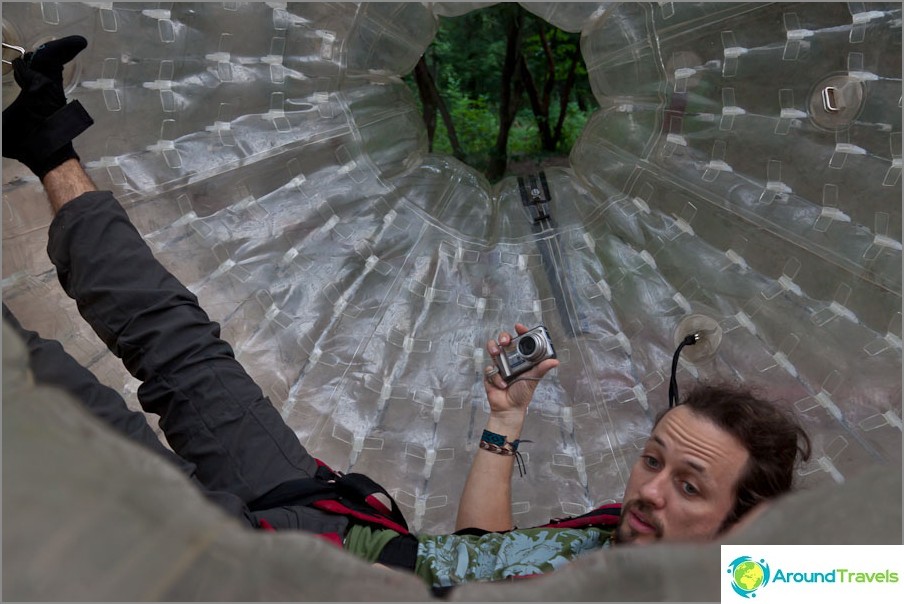 Landing was successful, well that is not upside down 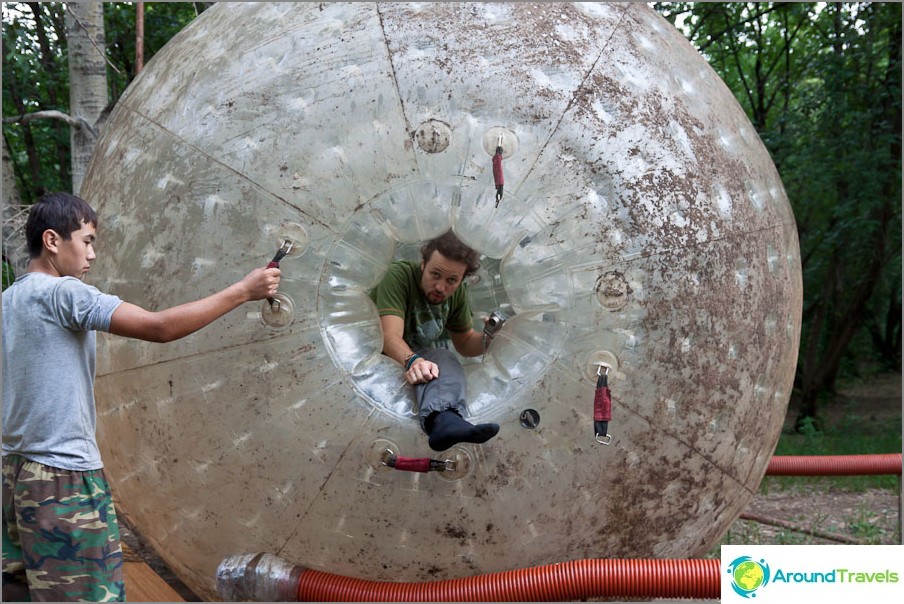 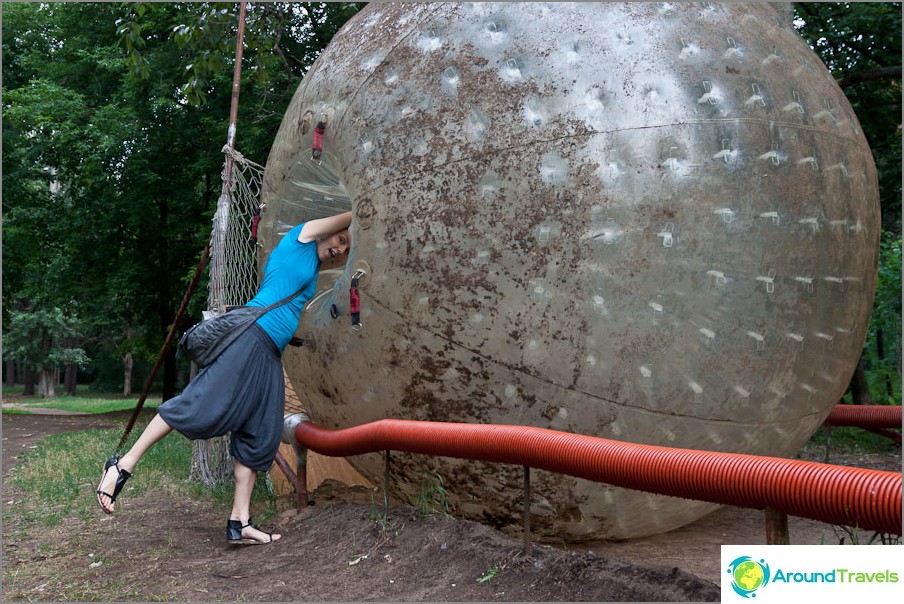 Zorbing - video from inside

A young man in charge of zorbing, in every wayconvinced me not to shoot a video, but I did not listen to him, and here's a minute video for you. The descent was very short in time, but time seemed to slow down. I didn't even immediately believe when the video looked that everything happened so quickly. By the way, the ball rolls quite measured, so there will be no racing drive.

FullHD video, so it's best to watch at maximum resolution

Flying on a paraglider over Rublevka is scary ...