Articles about Salzburg
by Alexis 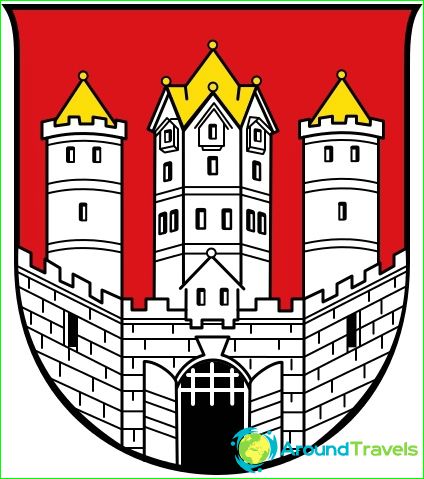 Coat of arms of Salzburg

Homeland of the legendary Wolfgang Amadeus Mozart - Salzburg is the fourth largest city in Austria and the capital of the federal state of Salzburg. The city is located about 300 km from Vienna at the northern foothills of the Alps on the picturesque banks of the Salzach River.

During archaeological excavations, it was revealed that the first settlements on the site of modern Salzburg existed in the Neolithic era. Around the 5th century BC the Celts settled on these lands, establishing several settlement communities, which in about 15 BC, after the occupation of the region by the Romans, were united into the city of Yuvavum. In 45 A.D. the city received the status «municipal» and a number of rights and privileges. After the collapse of the Roman Empire, the city gradually fell into decay and by the end of the 7th century it had virtually ceased to exist..

Formation of the city

The revival of the city begins already at the beginning of the 8th century after the Duke of Bavaria Theodoric granted the abandoned land to Bishop Rupert, who built the monastery of St. Peter here. Around the monastery, in fact, subsequently a city grew, which received the name «Salzburg» (translated from Latin «salt castle»). In 739, the city became an episcopal seat, and then an archbishopric. Bishop Rupert was later canonized and is revered today as the patron saint of Salzburg.

In 1077, on the top of a steep hill overlooking the city, construction began on the famous Salzburg castle - Hohensalzburg. Over the course of several centuries, the castle has been repeatedly expanded and rebuilt and today it is one of the largest medieval castles in Europe that have survived to our times..

In 1278, the Archbishopric of Salzburg was recognized as a sovereign principality of the Holy Roman Empire, but only in the 14th century it received full independence from Bavaria. The worst outbreak of plague in the 14th century killed almost a third of the city's population.

Salzburg's economy has been based on the production and sale of salt for centuries. In the 15th century, various crafts began to actively develop, and in 1492 the first brewery Stiegl-Brauwelt was opened (today it is one of the most popular attractions in the city). But after a few years, social unrest began, which became, in fact, a prelude to the Reformation. The ensuing riots among the peasants led in 1525 to a three-month siege of Hohensalzburg. After the stabilization of the situation, the city began to develop rapidly, reaching its peak in the 17-18 centuries. Under the strict guidance of Italian architects, Salzburg becomes one of the best examples of European Baroque.

In 1803, during the Napoleonic wars, within the framework of German mediatization, the archdiocese became part of the Salzburg Electorship, and already in 1805, after the signing of the Presburg Peace, the lands of the former archbishopric became part of the Austrian Empire. In 1809, Salzburg ceded to the Kingdom of Bavaria, and in 1816, by decision of the Congress of Vienna, returned to Austria, becoming the capital of the principality of Salzburg in 1850. Since 1868, the principality was officially part of the Austro-Hungarian Empire, remaining «crown earth» Austrian Empire.

As a result of the defeat in the First World War, the Austro-Hungarian Empire collapsed and Salzburg became part of the new German Austria, and already in 1919, after the signing of the Treaty of Versailles, it became part of the First Austrian Republic. In March 1938, as a result of the Anschluss, Salzburg was also under German control. During the Second World War, the city was repeatedly bombed, but despite the fact that almost half of Salzburg was destroyed, most of its historic center remained untouched. The city was liberated by American troops on May 5, 1945.

Today Salzburg is considered to be one of the most beautiful cities in Austria. The well-preserved historic center of Salzburg («Old city») is a fine example of Baroque architecture and is a UNESCO World Heritage Site.