Articles about Costa Rica
by Amber 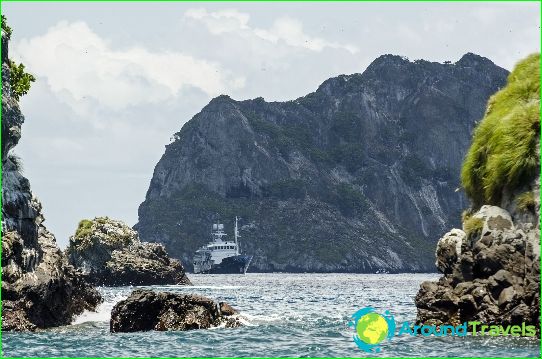 The small state of Costa Rica is located in Central America. Its eastern shores are washed by the Caribbean Sea, and the southwestern ones by the Pacific Ocean. The country borders on the Republic of Panama and Nicaragua. Its coastline stretches for 1290 km. The islands of Costa Rica are uninhabited.

The Pacific Ocean is home to one of the most beautiful land areas on the planet - Cocos Island. It is located 550 km from the coast of the country. The area of ​​this island is 24 sq. km. It is the largest uninhabited island in the world. Its territory is completely covered by jungle. The island was chosen by divers, as the coastal waters are crystal clear. The exotic Cocos Island is occupied by tropical forests, and the seabed is rich in algae. The nature of this land area is protected by the state. Coconut is one of the UNESCO World Heritage Sites.

Los Pajaros, Uvita and Negritos are also considered uninhabited islands of the state. Costa Rica occupies the Central American Isthmus. Its territory from the Caribbean Sea to the Pacific Ocean can be crossed by car in a few hours. The landscapes of the country are striking in their beauty. There are green valleys, active volcanoes, mountains and beaches. The flora and fauna are very diverse. The rainforests of Costa Rica are full of exotic plants. More than half of the country's area is covered with forests. Among the plants there are valuable trees: ebony, red, balsa, etc..

Among the islands of Costa Rica, Uvita stands out. It is an uninhabited, small piece of land in the Caribbean. Its territory is occupied by the jungle. It is 3 km away from the coast of the country. The tropical island belongs to the territory of the city of Puerto Limon, but is located across the strait from it.

Among the states of Central America, the country ranks second in terms of living standards after Panama. Despite its geographic location, Costa Rica is a country dominated by «white» population. The locals are also mestizos, mulattoes, Indians, Negroes and Asians. The official language is Spanish.

Previously, the land of Costa Rica was inhabited by the Huetara, who disappeared completely after the conquest. The main city of the state is San Jose, home to about 288 thousand people. Costa Rica is a neutral state, the only one in America that has abandoned the army. The police have power functions there.

The islands of Costa Rica are located in an area of ​​subequatorial climate. The average air temperature on the plateau is +25 degrees. In the mountains, the temperature sometimes drops to +10 degrees. On the coast and in the lowlands during the day the temperature reaches +33 degrees. There is a lot of precipitation in the country. It rains constantly on the Caribbean and Pacific coast from late spring to November. Dry season starts in May and ends in August.