Articles about Prague
by Alexis 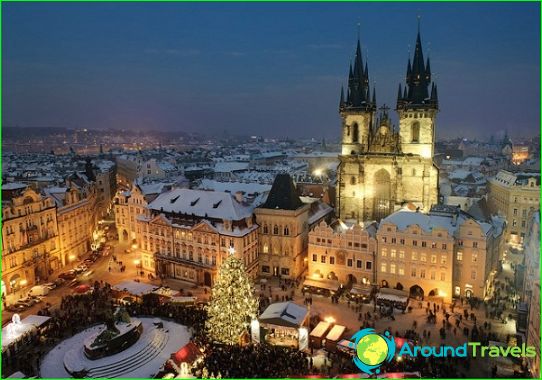 Amazingly combining medieval mystery and modernity, Prague is not for nothing considered one of the most beautiful cities in the Old World and attracts millions of tourists every year. Its fabulousness and romance is an excellent occasion to celebrate the New Year, beloved from childhood, in Prague, in an atmosphere that is mysterious and a little unreal..

The most important signs of the New Year and Christmas in the Czech capital are the spicy aroma of mulled wine and mistletoe that spreads in the air, which has become a symbol of the holiday. The ancient squares and bridges that girdled the Vltava, medieval castles and modern shops, cozy cafes and many-sided fairs, all these days glows, burns, shimmers and sparkles with myriads of bright lights.
The most delicious Prague delicacies are handmade sweets offered by cafes and restaurants in the old town. For serious New Year's gatherings, a traditional menu is suitable, which includes a hundred types of beer, goulash with dumplings or an appetizing pork knee baked until golden brown, which the Czechs consider to be a Christmas dish..

Desires exist to be fulfilled

The main sign of the New Year's holiday is not only gifts and feasts, but also millions of made wishes. In this sense, the New Year in Prague is a sure way to fulfill them. To make your dream come true, you need to go to the famous Charles Bridge. Three dozen sculptures are installed on it, three of which, according to old-timers, fulfill any wishes..
Everyone can distinguish magic statuettes from ordinary ones - they have been rubbed to a golden shine by generations of previous dreamers. The ritual will have to be observed exactly as the residents of the city themselves will tell.

The antique clock is still running

The main New Year celebrations in Prague take place on the Old Town Square. It is the heart of the city, and it is here that the main Czech Christmas tree is dressed up and the festive fair is roaring. By the way, the Orloi clock on the town hall tower is an astronomical chime, the main feature of which is the change of figures in the windows that open every hour..
The square is decorated with the ancient Church of St. James, founded in the 13th century, and the Church of the Virgin Mary, whose construction dates back to the 14th century. Both architectural monuments have luxurious interiors, and murals and frescoes are among the most significant and important in Europe..