Rome is the capital of Italy 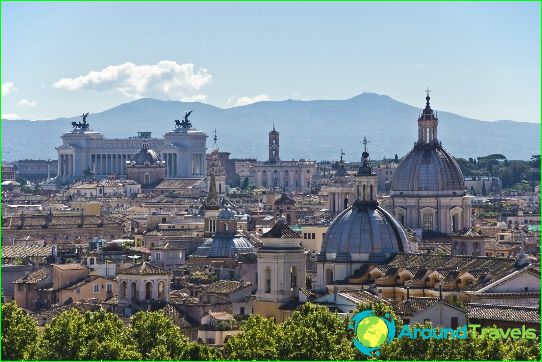 The capital of Italy, Rome, is a magnificent city celebrated by many poets. His power, beauty and wealth could not but go unnoticed. "The Eternal City" - this is how Rome is often called, it is ready to give its guests a huge variety of interesting places to visit.

The real "heart" of the capital, where the Roman municipality is located. The hill is adorned with a delightful white marble staircase, designed by the magnificent Michelangelo. During the climb, you can admire the beautiful bougainvillea bushes, adorned with lilac-lilac flowers. The top of the staircase is decorated with a pair of equestrian statues from the Roman period. The top of the hill is completely occupied by the Capitoline Square, recreated at the request of Pope Paul III.

The next must-see place. Once a huge amphitheater, it is now a magnificent ruin. Now the Colosseum is called a little differently - Flavia Amphitheart, and the indigenous people of Rome sometimes call him Collosum.

It was here, according to legend, that the future founders of the city, Remus and Romulus, were found. Capitol Hill has not always been the center of the capital. This role was played for a relatively short time by the Palatine Hill..

The city has an incredible number of churches. If you visit a new church every day, then a year will not be enough to inspect all the existing churches. In them you can admire the creations of the great Michelangelo, Raphael and Bernini.

Be sure to include Santa Maria Maggiore, Lateran Basilica, Pantheon and San Giovanni on your list of visits. Be sure to check out the second largest cathedral in Rome, San Paolo Fuori le Mura. The first is, of course, St. Peter's Basilica.

Among the numerous squares of the capital, it is necessary to highlight the area of ​​Spain. It was named so because the embassy of this country is located here since 1647. You will love the stairs leading up to the Santa Trinita dei Monti. Its construction took four years (1723-1726). The square is always full of people. Both tourists and indigenous people of the city like to sit on the steps..

Piazza Navona is also very beautiful. If you like the baroque style, then by all means take a walk here.

The most famous fountain in Rome is Trevi, made in a chic baroque style. Its center is adorned with a statue of Neptune, who rules by three horses. There is a sign: if you throw a coin into the water of the fountain, then you will return to this "eternal city".