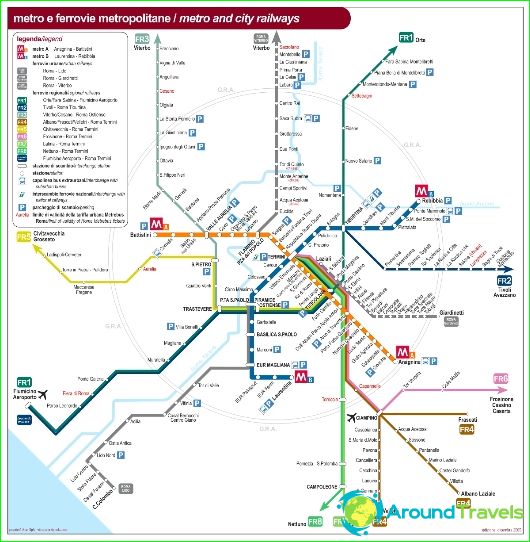 Rome metro map
The Romans call their metro "Metropolitan". The Rome Metro was opened in 1955. It is the oldest metro in Italy with a total of 40.4 km of lines and 52 stations, 46 of which are underground. Currently, the Rome metro system consists of two functioning metro lines: Line A (orange) and Line B (blue), crossing under Termini, the main train station in Rome. Line B forks at Bologna station. Line C (green) is under construction - successively sections of this line will be introduced according to the metro development plans until 2020:

Train traffic on Line C will be fully automatic, with plans to use the AnsaldoBreda trains that are used on the Copenhagen Metro. In the future - the construction of the fourth Line D (yellow), the work on the project of which is temporarily suspended.

The first plans for the construction of a metro in Rome appeared in the thirties with the aim of connecting Termini station and the new district 42, where the 1942 Fair was to take place. However, all plans collapsed due to Italy's entry into the war in 1940. By this time, several tunnels had been built, in which the inhabitants of Rome hid from bombing and shelling during the war..
Work on the creation of the first urban railway in Italy resumed in 1948. On February 9, 1955, the official opening of the new railway took place in Termini. The next day, the trains received the first passengers..
However, there was no real underground metro in Rome until 1959. This was hampered not only by the bureaucracy, lack of funding, but also by the fact that Rome, as an ancient city, has several cultural layers, and any serious work in the depths in the center of the city met with protests from archaeologists who demanded a more careful study of the construction zone..
The work began in 1964 from the Tuscolana square, but was complicated due to poor organization. Due to constantly occurring accidents in the quarry, they had to be stopped for a while and resumed five years later, using modern technologies..
Thanks to archaeologists at Repubblica Station, passengers can see the remains of the Roman city wall, and at Termini Station, ancient mosaics.

The Rome Metro runs from 5.30 am to 11.30 pm every day, and trains run approximately every 7-10 minutes. Tickets can be purchased at newsstands, tobacco kiosks, and ticket machines. The Roman metro is integrated into the general transport system - tickets are valid for all types of transport. To travel to the metro, you must use a ticket at the entrance and exit at the turnstiles. Most Romans don't buy tickets, but use season tickets. Controllers work on metro routes.