Articles about Bishkek
by Amber

Bishkek - the capital of Kyrgyzstan 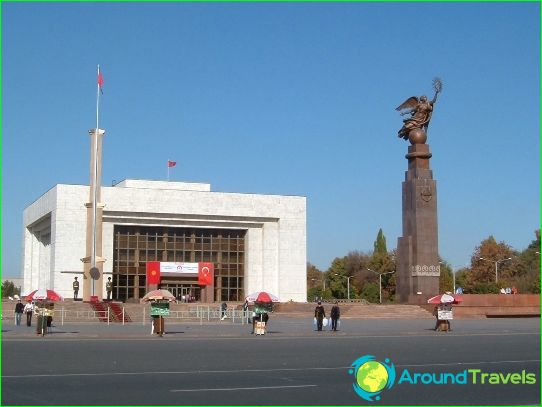 The capital of Kyrgyzstan, Bishkek is a relatively young city. It was built only two centuries ago. If you are an admirer of antiquity, then the capital will seem boring to you. But at the same time, Bishkek simply amazes with the number of parks located on its territory. Their total number is 20. Among them is the largest Botanical Garden in Europe..

Residents of Bishkek call this place the heart of the city. The literal name translates as «Snowy mountains», which, in fact, characterizes the nature of the country, half of which is mountainous.

Ala-Too Square is the most beloved place of the capital's residents. It is here that various kinds of events take place (folk festivals, festivals, holidays, rallies, etc.). Ala-Too is surrounded by many interesting places to visit. In particular, the Museum of Sculptures, Nikopol Church and the Friendship of Nations Monument.

The Botanical Garden is one of the most beautiful and popular places in Bishkek. The residents of the city themselves call it the Garden of Eden of the capital. It is part of the National Academy of Sciences of Kyrgyzstan and bears the name of E.Z. Gareev - famous scientist-biologist of Kyrgyzstan.

The botanical garden was established in 1938. Today it has already managed to take first place in the species composition of the plants represented in it in all of Central Asia and the CIS countries. More than 8 thousand fruit plants, 2.5 thousand species of shrubs and trees, 3 thousand flowers, herbal and greenhouse plants grow in the garden. The Botanical Garden covers an area of ​​124 hectares, but only 36 are available to visitors..

The best times to visit are spring and autumn. In spring, the air of the garden is saturated with aromas of flowers, and in autumn you can admire the bright outfits of plants..

The sculpture museum is located in one of the city's parks and belongs to the category of museums «open air». The museum was founded in 1984, and its opening is timed to coincide with the 60th anniversary of the founding of the Kyrgyz SSR.

One of the oldest park areas in the city. This oak park is practically the same age as the city. The first oaks were planted in 1890. The park received its modern name relatively recently, only in 2010. But for the residents of the city, it remains an Oak Park..

The St. Nicholas Church is located in the park. In addition to it, during a walk, it is also worth seeing some more interesting sights: the famous fountain «Twelve bowls», The eternal flame and a granite 11-meter obelisk located at the mass graves of the Red Army soldiers.