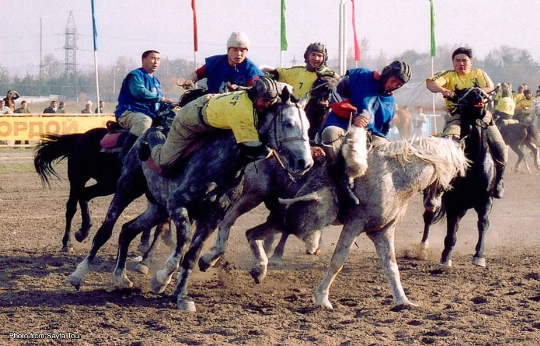 Since ancient times, Kyrgyzstan was inhabited by nomadic pastoralists who, in search of better pastures, constantly moved from one region to another. In the process of nomadism, the tribes entered into relations with other peoples, adopted their cultural, marriage, and economic customs, and therefore the traditions of Kyrgyzstan are a powerful alloy of the culture of the Turks and Mongols, Dungans and Uzbeks, Uighurs and Kazakhs.

Yurt on the flag

The traditional Kyrgyz dwelling is the nomad's yurt, which provides maximum living comfort and can be rolled up and re-installed in a matter of minutes. The traditions of Kyrgyzstan involve performing many rituals during the construction and settlement of a new yurt, the essence of which boils down to expelling evil spirits and attracting good luck and prosperity to the house. The portable dwelling place of the Kyrgyz nomad is so important in the culture of the country that it was even depicted on the flag of Kyrgyzstan.
An equally important item in everyday life is the Kyrgyz carpet. This work of applied art is not just an element of the interior, but also an indicator of the owner's social status. Carpets are made here by felting sheep's wool. They are light, unusually warm and help to escape from bad weather. Bags and sacks are sewn from such a carpet, and their service life is several decades..

What are they, Kyrgyz?

Once on a trip to this mountainous country, it is important to remember that the inhabitants of the country live according to special laws that differ from the generally accepted norms of life and behavior among Europeans: