Articles about the Marshall Islands
by Amber

Majuro - the capital of the Marshall Islands 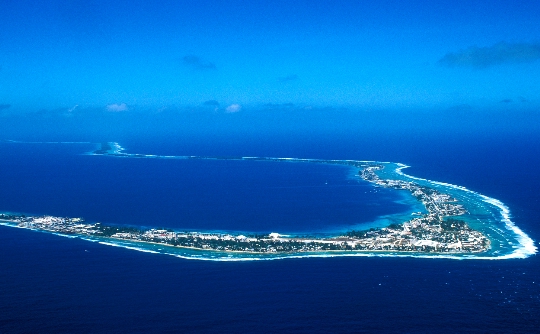 Oceania is endless sea expanses, thousands of large and small pieces of land that belong to different countries. The main occupation of tourists traveling to distant exotic corners of the land is the beach, sunbathing and sea baths, relaxation against the backdrop of soothing landscapes. But there are also cities worthy of the attention of guests, for example, Majuro, the capital of the Marshall Islands..

On the world map, especially in this region, you can find similar settlements that are located on the islands. Among them is Majuro. The name of the capital and the atoll on which it is located are identical.

An interesting fact - the area of ​​the entire atoll, consisting of 64 islands, does not even reach 10 km. sq., while the area of ​​the lagoon is 30 times larger. This is used by travelers who spend most of their time not in the city, but on the coast..

Despite the considerable distance from the center of the world, the Marshall Islands and their capital for many decades have been under the scrutiny of the powers that be..

There is a version that the settlement dates back to the end of the 19th century, some historians even call the probable year of formation - 1884, and immigrants from Europe are considered the first inhabitants. The territory was originally a German colony, then, during the First World War, it went through the occupation by Japanese troops.

In 1944, the Japanese army was replaced by American soldiers who considered themselves liberators. Majuro grew and developed, in 1979 it became the administrative center, and in 1983 - the full capital of an independent state.

A trip to Majuro can be too expensive for many travelers as it is long and expensive to get here. In addition, significant cultural and historical monuments cannot be found here..

For those who are interested in the history of these territories, culture and life, there is a direct road to the Alela Museum, which has the largest collection of rarities in the Marshall Islands. Its name comes from the traditional basket used by local residents in everyday life. The most interesting exhibits of the Alela Museum are: traditional canoes and other ancient floating facilities; tools, household items; glass negatives depicting life on the islands at the turn of the 19th - 20th centuries.

Here at the museum there is also a cute souvenir shop where you can buy exotic souvenirs, hello from distant islands.