Home › Articles about Monaco › Capital of Monaco: map, photo. What is the capital city in Monaco?

Capital of Monaco: map, photo. What is the capital city in Monaco?

Monte Carlo - the capital of Monaco 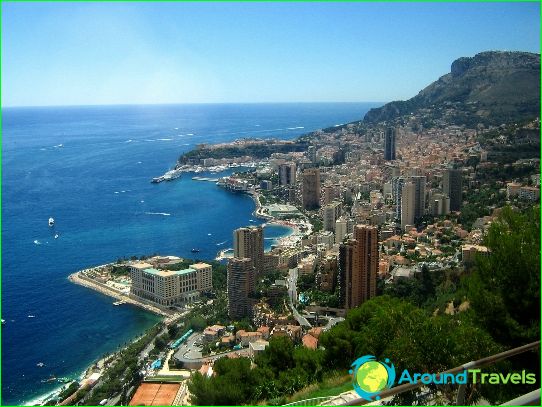 The capital of Monaco amazes with its sleepiness and serenity in the morning and afternoon, but in the evening Monte Carlo explodes, throwing open the doors of the world famous gambling house. Such a life attracts many, although the capital of the country is a very expensive place to live..

You will find the casino in the heart of the city. The gambling house occupies an ancient building, built in 1863. The architect was the creator of the Paris Opera Charles Garnier.

The palace has a long history. Its construction was completed in 1191. Since the 13th century, the building belonged to the Grimaldi family of noble Genoese, and was rebuilt many times, simultaneously expanding its borders.

During the tour, you will be able to admire the luxurious interiors that have survived to this day. In particular, the Italian gallery, decorated with 16th century frescoes, the Louis XV salon and the magnificent Blue Room.

The square is surrounded by ancient cannons, cast during the reign of Louis XIV. During the walk, you will also get the opportunity to admire the magnificent views from here to the Port of La Condamé..

Exactly at 11 hours 55 minutes on the square there is a spectacular performance - the changing of the royal guard. The carabinieri, dressed in lush costumes, conduct the ceremony in accordance with all traditions. Each time they are accompanied by thirty musicians.

The construction of the temple was completed in 1875. Earlier in its place there was an ordinary church, erected in the XIII century. The building was built in the common Roman-Romanesque architectural style. The famous artist Louis Brea worked on the interior of the temple. The altar and the facade of the building form a single composition, since only snow-white marble was used in the construction.

The cathedral is now receiving believers. On holidays, services are held here, accompanied by organ music. The instrument was delivered and installed in 1976.

The founder of the museum was Prince Albert I of Monaco, who devoted his life to oceanography. His scientific collections made a huge impression on the visitors of the World Exhibition in Paris in 1889 and inspired by this, the prince decided to create a museum. It was founded in April 1899, and received its first visitors in March 1910..

Externally, the building of the museum looks very impressive. It seems to grow from the sheer slope of the Rock of Monaco, towering as much as 85 meters above the sea..

Representatives of the entire underwater world of the planet are represented in the Aquarium. More than 6 thousand different fish and many invertebrates live here on an artificial reef..