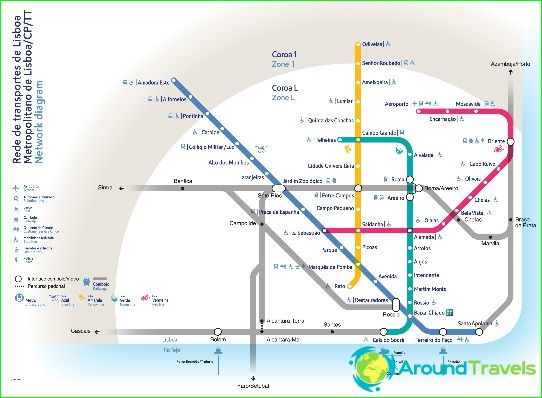 Lisbon Metro (Metropolitano de Lisboa) was opened in December 1959, it was the first metro in Portugal.

The idea of ​​building a system of underground railways in Lisbon has been around since 1888. The first plan was published by military engineer Enrique de Lima in the Obras Públicas e Minas magazine. In the early 1920s, ideas again captivated the minds of famous engineers. But it never came to their implementation..

After World War II, in which Portugal remained neutral, the rise of the national economy gave a strong impetus to large-scale projects, including the construction of the subway. On January 26, 1948, a committee was formed to study the technical and economic feasibility of the underground public transport system in Lisbon..

Construction began on August 7, 1955, and four years later, on December 29, 1959, the metro was opened. A Y-shaped line connected Restauradores and Rotunda (now Marquês de Pombal), branching out to Entre Campos and Sete Rios (now Jardim Zoológico).
The new transport was enthusiastically received by the public, and in the first year the metro carried more than 15.3 million passengers. The metro proved to be an important factor in the development of the city, covering new territories..

The Lisbon Metro starts every day at 06:30 and ends at 1:00 (the last trains arrive at the end stations at 1:30). Trains run every 5-8 minutes. Lisbon metro tickets

In the Lisbon metro, there are two ways to pay for your fare:

Both cards can also be used on other modes of transport (including commuter trains and Transtejo & Soflusa ferry boats). A rate of € 1.40 is charged per metro ride, regardless of the distance traveled during the trip.

Much attention is paid to the architecture of stations in the Lisbon metro, like the metro systems of Moscow, Montreal and Stockholm. During the construction period, the main task of the architects was the moment of transition between the above-ground and underground parts. Architect Francisco Keil do Amaral (1910-1975) designed a station model that was used as a template for all metro stations built before 1972. Moderation and firmness of lines prevailed in architecture. Eleven stations, excluding Avenida, the fruit of the grandiose work of the artist Maria Keil (1914-2012)
In 1988, modern Portuguese artists worked on the design of the new stations: Rolando de Sa Nogueira, Julio Pomar, Manuel Cargaleiro, Vieira da Silva. Lighting plays a very important role in all stations..