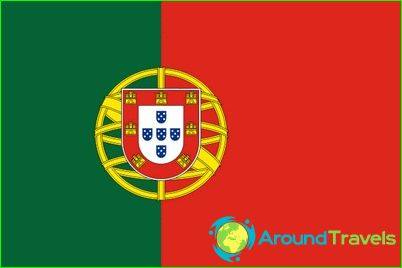 The flag of Portugal (Bandeira de Portugal) is one of the most important distinctive signs and symbols of the state of Portugal (Portugal), officially the Republica Portuguesa, located in the southwest of the Iberian Peninsula.
The Portuguese flag is a rectangular panel with an aspect ratio of 2: 3, which consists of two vertical stripes of different sizes. The left side of the smaller flag is colored green and occupies 2/5 of the total length of the flag, the right side of the larger one is colored red and occupies the remaining 3/5 of the flag's length. In the center of the contact of the two stripes, at an equal distance from the upper and lower edges, there is a small coat of arms of Portugal, which is a golden armillary sphere, and on it a heraldic shield. The diameter of the armillary sphere is ½ the width of the flag. In the center of the sphere, a shield is vertically located, which in heraldic science is described as follows: «In the silver shield there are five azure shields with five silver bezants, on the scarlet border there are seven golden locks with triple towers, three of which are the main ones..»

During the republican revolution on October 5, 1910, the monarchy was overthrown in Portugal. To consolidate the revolutionary successes, it became necessary to replace the former royal symbols, in particular the blue and white royal flag, with a flag
new republican Portugal. This task was so significant for the newly baked authorities that on October 15, a special government commission was created to approve the new flag. Red and green were chosen as the new colors of the Portuguese national flag, the colors of the Republican Party, which were also the colors on the banners of the rebels who raised the uprising in Porto on January 31, 1891. At the same time, the coat of arms of Portugal, consisting of an armillary sphere and a heraldic shield, was approved as the main symbol placed on the flag..
For the first time, a new flag was hoisted in Lisbon at the monument to the Restorers on December 1, 1910, to the 270th anniversary of Portugal's independence.

Red, which occupies most of the flag, according to the plan of its creators, symbolizes the blood of heroes who gave their lives for the freedom of their homeland, and is also the color of passion, struggle and courage, and at the same time the color of joy and optimism, calling forward to new achievements.

Green is interpreted as the color of hope and faith in the future of the Portuguese people.

The armillary sphere, as the most important astronomical and navigational device, served the Portuguese sailors in the era of great geographical discoveries, turning Portugal into a powerful maritime power, and therefore rightfully earned the right to be considered one of the fundamental symbols of Portugal. No wonder she was previously depicted on many flags of Portugal and its overseas colonies..

Throughout the history of the country, the heraldic shield of Portugal has been depicted on almost every state flag. It is bright and memorable, and the history of its origin has been overgrown with legends, beautiful, but causing a number of doubts among scientists. But this does not in the least prevent the heraldic shield from remaining one of the oldest distinctive symbols of the country for centuries..