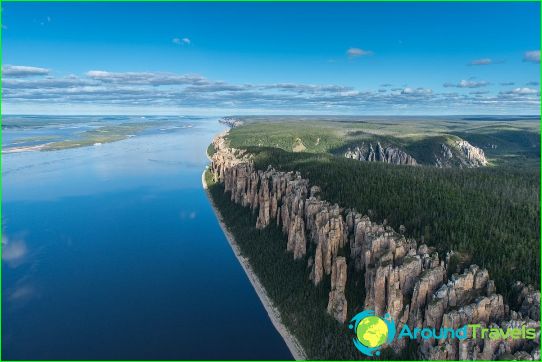 The Siberian Lena, which originates from a small lake a few kilometers from Lake Baikal, closes the ten longest rivers in the world. Given its geographical position, you should know that seven months of the year the river is bound by an ice shell. But in May, floods begin in these parts, and in June the tourist season starts, during which cruises along the Lena River on comfortable ships take place. Participants of such trips get acquainted with the most interesting natural and historical sights, take walks in protected areas, go fishing and learn a lot of interesting things about the flora and fauna of the Lena River basin..

Yakutsk and its beauty

All cruises on the Lena start in Yakutsk, the capital of the Sakha Republic and the largest city in the permafrost zone. Despite such a harsh characteristic, during the navigation period in the city it can be hot in summer, and the air temperature in July reaches here and +30 degrees.
The most interesting expositions of Yakutsk, according to tourists, are the Mammoth Museum and the Museum of the History and Culture of the Peoples of the North..

Having studied the present and past of the capital of Yakutia, travelers go on board the ship. The Lena cruise continues upstream, and Diring-Yuryakh becomes one of the first stops of the ship. In this place, archaeologists have discovered the campsites of ancient people, and the findings of scientists make it possible to challenge the statement about the origin of mankind in Africa..
In addition to archaeological excavations, participants on a cruise along the Lena visit dozens of interesting places: