Small towns in the suburbs 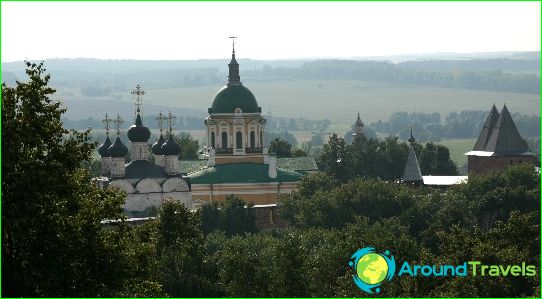 When choosing a route for a weekend tour, for a short vacation or just for a short trip for a couple of hours, you should pay attention to small towns in the Moscow region. If you look through the guidebooks, it turns out that just a couple of hours drive from Belokamennaya there are many interesting places that can make your vacation exciting and informative. Going on such a trip, you will be able to change the atmosphere of a noisy metropolis to a peaceful and calm contemplation of provincial life, in which there is a place for warm human communication and observations of the world around you..

In the top even in Europe

Sergiev Posad, known in the recent past as Zagorsk, is a city that every Orthodox person seeks to visit. Here is the shrine of the Russian Orthodox Church of the Trinity-Sergius Lavra, which is not only the largest active male monastery in Russia, but also the richest museum of the history of Russian architecture. Thousands of believers from many places on the planet come to Sergiev Posad. Here the suffering and the sick are healed, they pray for success and prosperity, and therefore, in popularity among others, this small city in the Moscow region is in first place in the list of its own kind..
The capital of the Moscow region is informally called Kolomna, where in the 16th century an outpost was founded that protected Moscow from the raids of the Crimean Tatars. The Kremlin, built by order of Ivan the Terrible, was inferior in size only to that of the capital, and its surviving towers and fortress walls evoke awe even among modern construction masters..

Unlike Kolomna, the Kremlin in Zaraysk has been perfectly preserved, and since the 16th century its towers and walls have been vigilantly guarding the peace of the inhabitants of this small town in the Moscow region, 150 km from the capital on the Osetr River. Due to the low popularity of Zaraisk among organized tourist groups, you will not find crowds armed with cameras, frightening flocks of chickens, importantly scattering emerald grass under the walls of the Kremlin with their bright yellow paws.
The distance from the Moscow Ring Road to Podolsk does not exceed 15 kilometers at all, but the Znamenskaya Church on its outskirts in the Dubrovitsy estate is a miracle that has no equal anywhere else in Russia. The temple was built during the reign of Tsar Peter I, architects invited from Switzerland and its magnificent decoration - bas-reliefs, stucco molding and sculptures - cause constant admiration for every guest of the city.