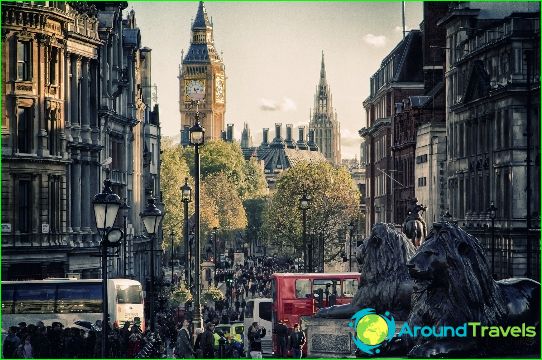 Desire is not enough to travel to the capital of the British Empire. You will have to apply for a visa and stock up on an umbrella: it often rains in the city of fogs, which, however, in itself is a local attraction.

When to go to London?

Daytime temperatures in London are rarely sub-zero. But in the summer, the British do not suffer from extreme heat. That is why any season is suitable for a visit to the capital of Great Britain. There is something to do here both during the Christmas holidays and on a fine July day.

How to get to London?

The plane from the Russian capital overcomes the distance to the English one in three and a half hours. Heathrow Airport is connected to central London by bus, rail and underground lines. The cheapest way to get to the selected hotel is by metro, the most exciting is by bus, the fastest is by high-speed train.

London hotels are never cheap by definition. Even the simplest hotel room without stars here will be significantly more expensive than similar ones in Europe or the USA. The most budget accommodation options should be sought further from the center. It is best to settle in the Paddington Station area: both hotels are cheaper and it is easier to get from the airport.

Expensive in everything, London makes no exception for its restaurants and cafes. The average bill in an ordinary establishment can unpleasantly surprise even those who are accustomed to having a rest on a grand scale, and therefore it is important for travelers first to ask for the menu and study it. You can dine on a budget at the Chippie restaurant chain, where you can order food and takeaway. Another option to save on food is to buy groceries in the supermarket and cook simple meals yourself right at the hotel..

To list the sights of London is a thankless task. You can arrange a walk in the parks or visit all the most important museums. Climbing on the famous Ferris wheel, guests of the city will appreciate its scale from the height of the flight of the most daring bird, and watching the changing of the guard at Buckingham Palace - will admire the inviolability of the traditions and foundations of the royal monarchy. Popular sites include Sherlock Holmes House and St Paul's Cathedral, Big Ben and the Tower, Westminster Abbey and Hyde Park.
Tourists take the most interesting photographs against the backdrop of the famous telephone booths of London and its red buses, and the best souvenirs for friends and family are English tea and caps of the world famous detective, who for some reason played the best in the cinema by a Russian actor.

Photos of the trip to London