Home › Articles about Mexico › What is the sea in Mexico? Sea in Mexico: photo, map 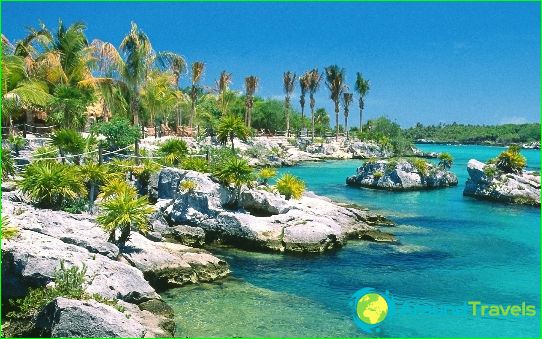 The largest state in Latin America considers tourism to be one of the most important components of its economy. The reason for this is not only historical sights and ancient archaeological sites, but also the seas of Mexico, where tens of thousands of travelers from all over the world become a little happier every year..

The country of tequila and ancient pyramids is located between two oceans, and therefore, when asked which seas in Mexico, the most correct answer is oceans. The western Mexican coast is dominated by the waves of the Pacific Ocean and its Gulf of California, while the eastern one is in charge of the Atlantic with its representative - the Gulf of Mexico. But which sea washes the shores of the famous resort of Cancun, everyone who has been here knows. It is the turquoise blue of the Caribbean waves that is captured on memorable photos in thousands of albums and their owners often dream of their owners at nights of slushy autumn and frosty winter..

One hundred shades of turquoise

The Caribbean Sea belongs to the Atlantic basin, but through the artificially created Panama Canal it also has access to the Pacific Ocean. The sea area is over 2.7 million square meters. km, and the temperature of its water in numerous resorts reaches about +28 degrees in summer and almost +25 in winter. The Caribbean Sea is home to numerous representatives of the local fauna, and only fish in its waters are represented by no less than 450 species. It is inhabited by:

And yet, the main importance of the Caribbean Sea off the coast of Mexico is the possibility of a comfortable beach holiday..

The western coast of Mexico is dominated by the largest ocean on the planet - the Pacific. Its surface area is almost 180 million square kilometers, and its lowest point is located at a depth of almost 11 km. It is in the Pacific Ocean that the date line passes.
On the Pacific coast of Mexico, the famous resort of Acapulco is located, which is considered the most suitable for a noisy youth holiday. This city was once a favorite entertainment destination for movie stars and millionaires. The cove, on which Acapulco stands, is one of the five most beautiful in the world due to the magnificent sunsets, and the nightclubs and restaurants in the resort attract fans of active evening life to this Mexican coast..

Photos of the coast of Mexico