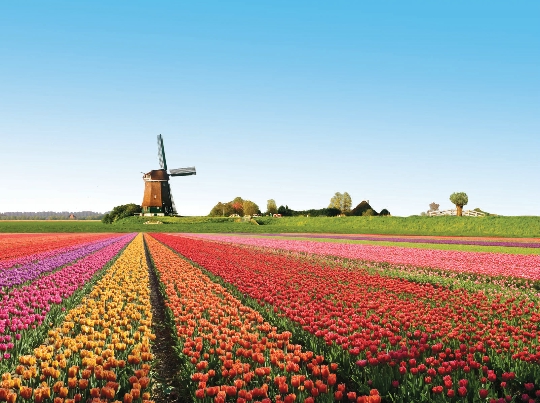 Dutch cheese, Amsterdam with hundreds of canals, thousands of tulip varieties whose fields look like a patchwork quilt from the plane. And what else do we know about this country, where the army of Russian travelers goes on tourist trips every year??
To begin with, the country of Holland ... does not exist. Officially, the state with its capital in Amsterdam is called the Kingdom of the Netherlands, and Holland is rather a tourist brand, a middle name, better known and more pleasant to the ear. It comes from the name of the two provinces of the same name - North and South - the most influential in the economic, political and tourist senses..

Let's look at the map

The modern Netherlands is located in Western Europe and borders Belgium and Germany. The country has access to the North Sea and the coastline stretches for more than 450 km. The area of ​​the kingdom is about 42 thousand square meters. km, and as part of the country, in addition to European territories, there are also overseas possessions that have been inherited from the time of the colonial campaigns. These are the islands of Aruba, Curacao and St. Maarten in the Caribbean. The islands have a special status and together with them the country represents the Kingdom of the Netherlands with its capital in Amsterdam.
It is there that the king takes the traditional oath of allegiance to his subjects, however, this is where the capital's role of the city on the Amstel River ends. The residence of the royal family, the government and parliament moved long ago to The Hague, which was also preferred by most foreign powers for the location of their diplomatic missions. So the situation with the capital in Holland is about the same not very common situation as with the name of the state itself..

Thanks to Tsar Peter

In Russian, the name Holland stuck after Tsar Peter I visited the kingdom on an official and educational visit. Together with the most advanced minds of that time, the tsar visited exactly that part of the country that was called Holland. In these provinces, industry and shipbuilding were the most developed, which means that these lands were of particular interest to Peter I. Returning home, the royal retinue talked about the country, calling it Holland, from where the geographical confusion that we inherited began..