Home › Different countries › Flag of Benin: photo, history, meaning of the colors of the national flag of Benin

Flag of Benin: photo, history, meaning of the colors of the national flag of Benin 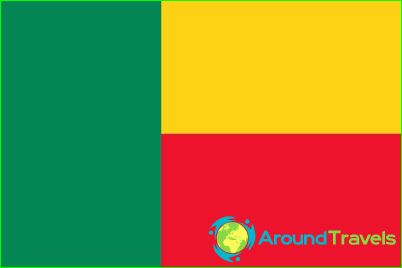 First «coming» The flag of the Republic of Benin on the state flagpoles took place in 1958. Subsequent changes in the political arena also affected the flag, but in 1991 it was re-adopted and since then it has remained unchanged..

Description and proportions of the flag of Benin

Benin's flag has the classic shape of a rectangle divided into three parts. Its vertical green field runs along the shaft, and the rest is drawn horizontally with a yellow top and a bright red bottom. The horizontal stripes on the Benin flag are equal in width to each other.
The traditional Pan-African colors of the Benin flag have great meaning for the people of the state. The red field of the flag is a reminder of the brave defenders of the country's sovereignty and the blood they shed for freedom and independence. Green symbolizes the hope of the people of Benin for a brighter future, while yellow symbolizes prosperity and wealth. Benin's flag cloth can be used for all purposes, both on land and on water. State law stipulates that both private individuals and official authorities are authorized to raise the flag. The army and navy of Benin also use the national flag of the country. It is raised on their masts by the commercial and Gradzhan ships of the republic..
The colors of the national flag of Benin are repeated on the coat of arms, established in 1990. The heraldic shield is lined in red, the castle on it and the skins of leopards supporting the shield on both sides are depicted in bright yellow. The green color of the palm leaves is also reminiscent of the field on the Benin flag, which symbolizes the best hopes of the people of the country..

History of the flag of Benin

As a former colony of France, Benin has long used its flag and anthem. Until 1958, the French vertical tricolor was raised on all flagpoles in the country. Then the territory received the status of an autonomous republic of Dahomey as part of the French community. In December, this event was marked by the raising of a new flag, which coincides with the modern symbol of the Republic of Benin..
In the fall of 1972, the Marxist party came to power in the country, and in 1975 Dahomey was renamed the People's Republic of Benin. The former flag was abolished, and its place on the flagpoles was taken by a dark green cloth, in the upper left corner of which was a five-pointed red star.
The regime that existed until 1990 was overthrown, and the green flag was lowered on August 1, 1991 and replaced with the previous one..