Home › Different countries › Flag of Laos: photo, history, meaning of the colors of the national flag of Laos

Flag of Laos: photo, history, meaning of the colors of the national flag of Laos 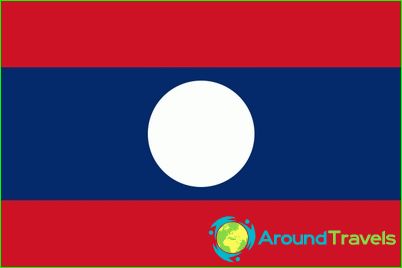 The state flag of the Lao People's Democratic Republic was officially approved at the end of 1975. It was then that a coup took place in the country, during which the king abdicated the throne, and the People's Liberation Army seized power in the country..

Description and proportions of the flag of Laos

The length of the rectangular flag of Laos refers to its width in a ratio of 3: 2. The flag field is divided horizontally into three stripes of unequal width. The top and bottom are bright red and equal. The middle field of the flag of Laos is twice as wide as the outermost ones, and has a dark blue color. In the center of the dark blue field, at an equal distance from the edges of the blue stripe, a white circle is drawn.
The red fields on the flag of Laos symbolize the blood of the patriots shed in all battles and wars of liberation. Blue for Lao people means wealth and prosperity. The white disk on the flag of Laos is a stylized image of the full moon over the Mekong River, sacred to every inhabitant of the Indochina peninsula, which is considered the breadwinner of all peoples.

History of the flag of Laos

Until 1949, Laos existed on the political map of the world as a colonial possession of France. He went to her in 1893 as part of French Indochina. In those years, the flag of Laos was a rectangular red cloth, in the upper corner at the pole on which a small flag of France was located. In the center of the red rectangle there was an image of three elephants standing with their backs to each other, and a stylized Buddhist stupa above them.
Having received sovereignty, the country began to be called the Kingdom of Laos, and the image of the symbol of France disappeared from its flag. The coup of 1975 changed not only the state and political system, but also the official symbols of the state. The red flag was replaced by the current flag, and the coat of arms of Laos was a wreath of rice stalks, which contained the most important values ​​for the inhabitants of the country..
The main national shrine on the coat of arms - the Great Stupa - is depicted in gold paint. Beneath it there is a dam and an asphalt road that symbolize new power and progress. Rice fields on the coat of arms of Laos are reminiscent of the main branch of the economy - agriculture. The country is one of the main suppliers of rice to the world market.
The inscriptions on the coat of arms of Laos mean the name of the country and its main slogans: Independence, Unity, Prosperity and Democracy.

Photos of the flag of Laos