Home › Different countries › Flag of Nigeria: photo, history, meaning of the colors of the national flag of Nigeria 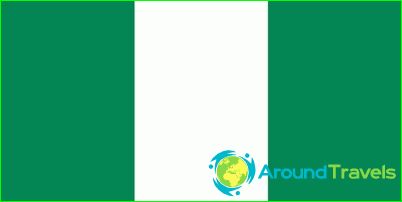 The state flag of the Federal Republic of Nigeria is an integral symbol of the country along with its anthem and coat of arms. It was solemnly raised for the first time in 1960..

Description and proportions of the flag of Nigeria

The rectangular flag of Nigeria has two colors. It is divided into three vertical stripes of equal width, the middle of which is applied in white, and the two outer ones in green. The proportion of the ratio of the width of the flag to its length 2: 3.
The green color of the flag of Nigeria symbolizes its forest wealth, and the white field reminds of the importance of peace for the development of the country and the heavy price that peaceful life went to this state..

The naval flag of Nigeria is a white rectangle. The upper quarter of the navy flag, closest to the flagpole, bears the image of the national flag of Nigeria. The right half of the white field contains an oval-shaped blue emblem enclosed in a gold frame. On the blue field of the emblem there is a white anchor, on which there is a standing red eagle. This bird serves as a symbol of the Nigerians and is also depicted on the national emblem of the country..

History of the flag of Nigeria

During the colonial rule of Great Britain, the flag of Nigeria was a rectangular blue cloth, the top quarter of which at the base was occupied by the flag of Great Britain. On the right half of the blue cloth, the emblem of Nigeria was applied, which looked like a green hexagonal star. In the center of its two crossed triangles was the royal crown, made in white. The six-pointed star became a symbol of colonial Nigeria thanks to the country's first governor, who saw its image on one of the jugs belonging to the emir of Contagora.

In 1960, Nigeria gained independence from British colonial rule, and officially adopted the new flag. The author of the project was student Michael Taiwo Akinkunmi, whose version suggested, in addition to three vertical stripes on the panel, the sun, applied to a white field. The jury accepted his project, excluding the image of the sun, and since 1960 the flag of Nigeria has not been changed again..

Photos of the flag of Nigeria