Samoa flag: photo, history, meaning of the colors of the national flag of Samoa 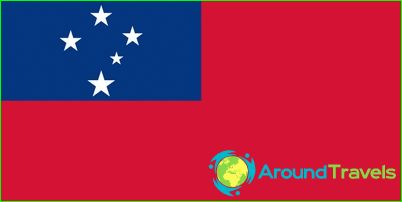 The flag of the Independent State of Samoa was officially adopted as a state symbol in February 1949.

Description and proportions of the Samoan flag

The Samoan flag has a classic rectangular shape, which is accepted in the vast majority of world powers. The width of the flag is related to its length in a ratio of 1: 2. The flag of Samoa, according to the laws of the country, can be used for all purposes both on water and on land, both by state bodies and officials, and by citizens of the state..
The main field of the Samoan flag is bright red. The upper quarter of the flag, closest to the flagpole, is painted bright blue. The quadrangular blue field depicts five white five-pointed stars of various sizes, forming the stylized constellation Southern Cross.
These stars also found their place on the coat of arms of Samoa, which was approved in 1962, on the day the country gained independence. The heraldic shield depicts a white Southern Cross on a blue background, above which a green coconut tree with golden fruits rises. From the bottom of the coat of arms there is a white ribbon with the motto «God is the foundation of Samoa». The shield is surrounded by a wreath of green olive branches, and the coat of arms is crowned with a Catholic cross, made in red and blue tones..
The symbols on the coat of arms of Samoa were not chosen by chance. Catholicism is the main religion practiced by the overwhelming majority of Samoans. A coconut tree and ocean waters indicate the location of the state, and olive branches symbolize the desire for peace and prosperity..

History of the Samoan flag

Previously a colonial possession of various world powers, Samoa used several flags as a state symbol. In 1900, the flag of German Samoa was adopted, the panel of which was a tricolor, the equal horizontal stripes of which were black, white and red. Such a cloth lasted until 1914..
Then the territory of Samoa passed into the possession of New Zealand, and the blue rectangular cloth became the flag. Its upper quarter at the flagpole contained the image of the flag of Great Britain, and to its right were four red five-pointed stars with a white outline of various sizes. The country became known as Western Samoa.
In 1949, the state received a modern flag, which has not changed its appearance since then..