Ambassador Beach - no shade and crowded

Not very long and always crowded beach at the large hotel complex Ambassador. The beach on both sides of the area immediately adjacent to the Ambassador Hotel is rather deserted, although there are also hotels nearby, but they are still not so large. In general, this place is a little out of the way, outside the city..

You can walk along the beach in complete silence and almost solitude, as long as you move away from the free sun loungers provided by the Ambassador. The sea is cleaner than in the center of Pattaya, although not perfect. There is no carriageway along the sea, but only about 600 m along one of the alleys of Na-Jomtien or along the territory of the Ambassador - and you are on Sukhumvit.

Taxis and regular tuk-tuk go along this big road, you can easily go to the center of Pattaya. So the beach is actually transportable, although it is located outside the city..

The total length of the beach is about 1 km, with a little over 300 meters directly adjacent to the hotel in the form of a very wide platform 60 m wide, next to the beach there is a huge rectangular pool 50 x 25 m, surrounded by palm trees. On one side of the pool, there are massage tables right under the palm trees. The rest of the beach is bare sand with no shade. Sun loungers from the hotel are also offered without umbrellas.

There is information on the network that the Ambassador beach is closed for non-residents of the hotel, but in fact it is quite difficult not to let strangers into the sea. Neighboring Bakko Beach, The ambassador and everything around them, up to the marina (yacht parking), is one coastline along which you can walk without hindrance. That is, the only obstacles are the large river flowing into the sea in the north and the fence of the yacht club in the south..

All three kilometers of beaches Bakko Beach and the Ambassador are quite free to walk. In several places, Na-Jomtien lanes with numbers from 8 to 18, going from Sukhumvit, go to the sea, so getting to the beach is not difficult.

At high tide, the entry into the water is sharp, at low tide it will be approximately knee-deep. But the ebb is not as pronounced as in some other places in Pattaya. There are no stones in the water, the sand is fine and yellow. On the shore there are places with shells scattering. The swimming area is fenced off with buoys. At the end of February-March, a strong wind blows, then there are waves.

There is no shadow directly opposite the Ambassador. We can say that there is no natural shade on this beach at all. Palm trees grow along the pool near the beach, but there is not much shade from them. On the sides of the beach there are several islets with local cafes and sun loungers under umbrellas in front of them. 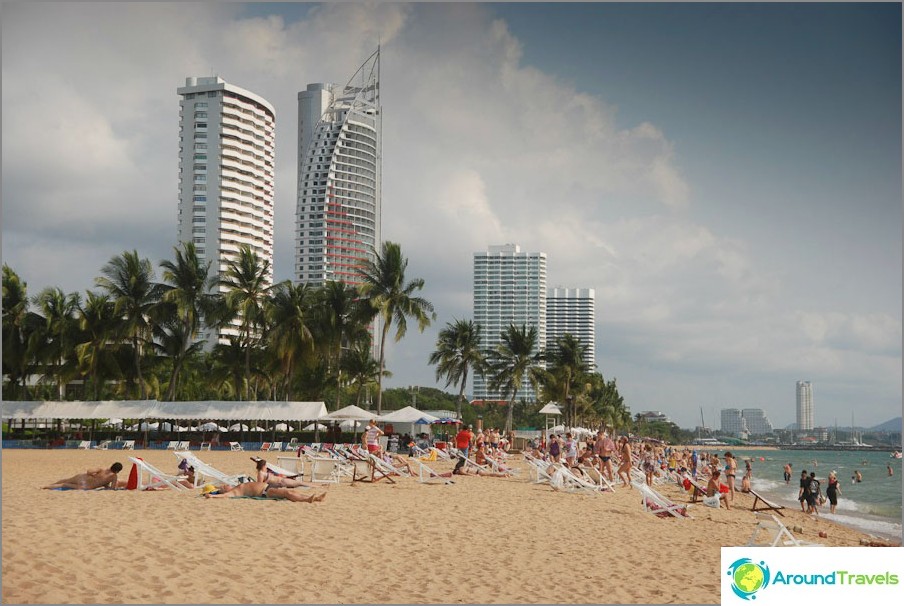 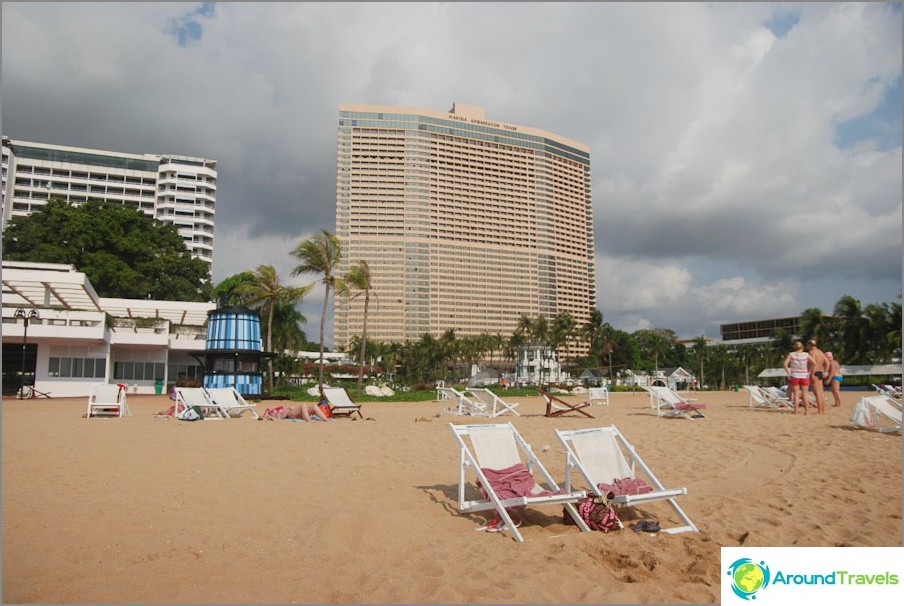 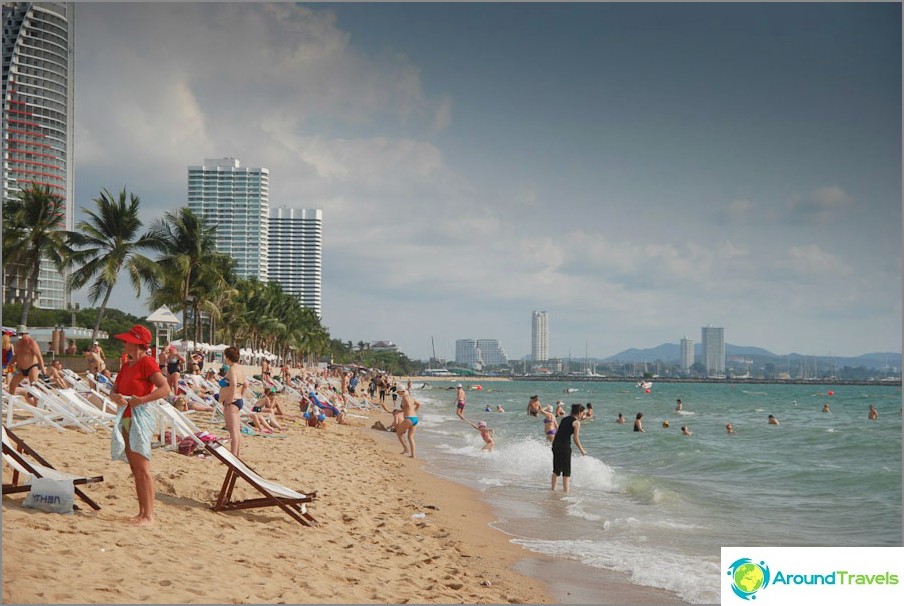 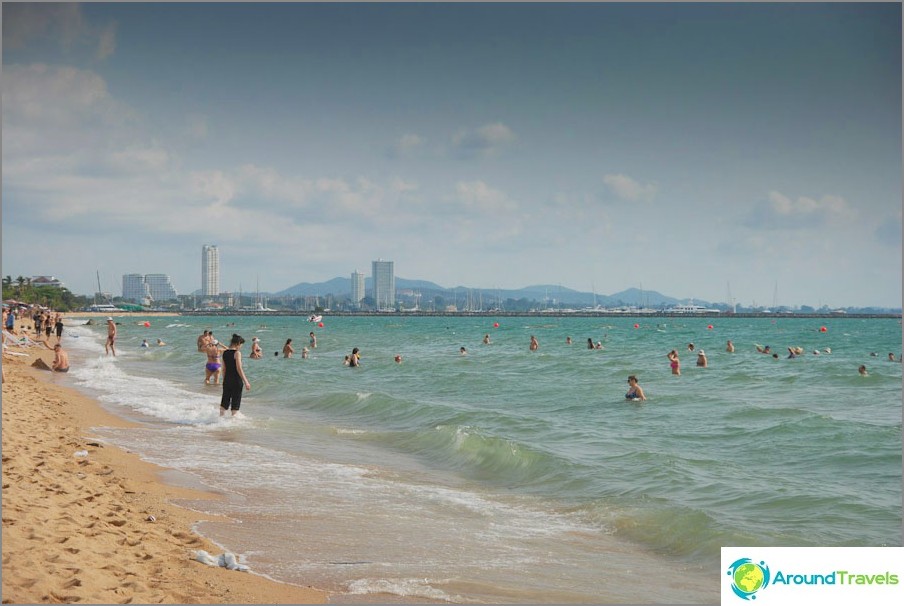 Beach opposite the Ambassador 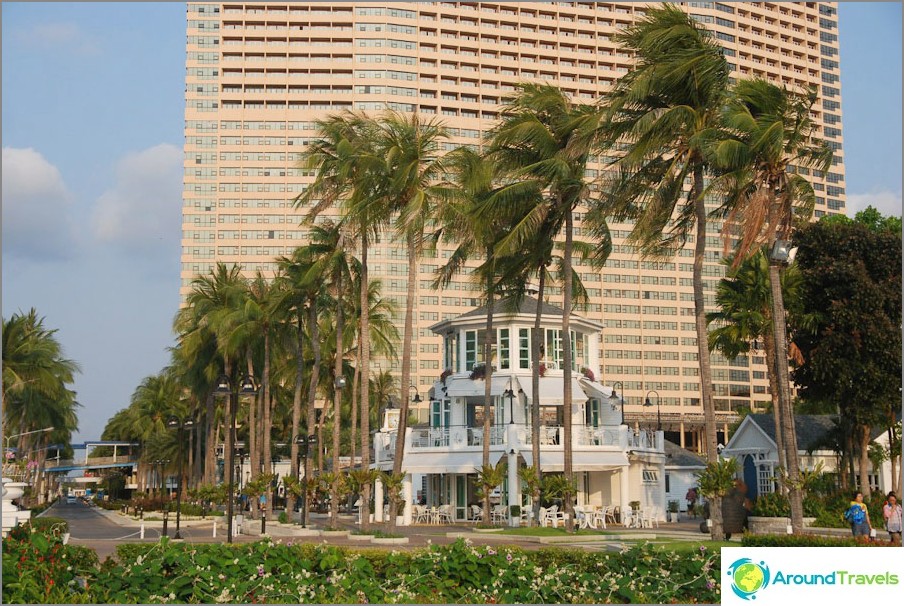 View from the beach to the territory of the Ambassador 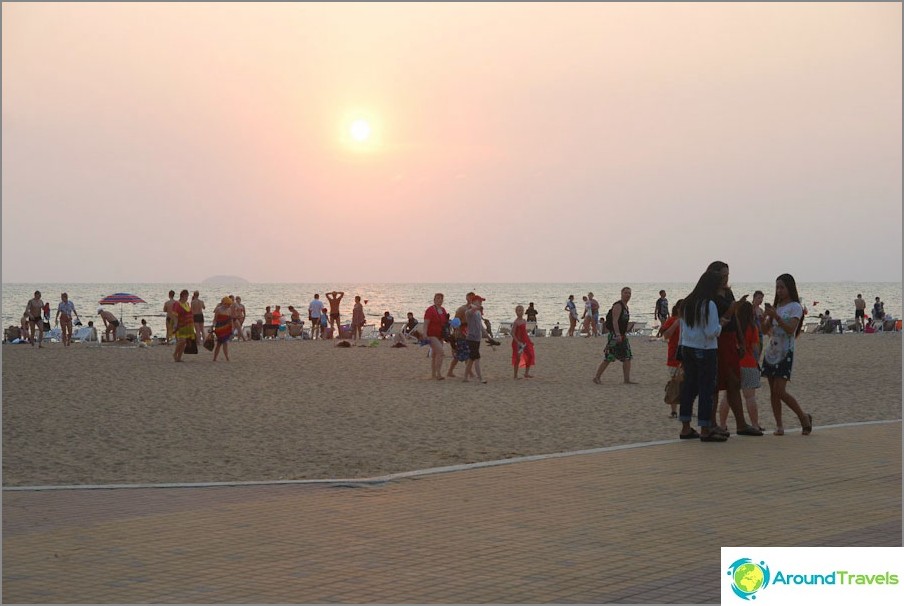 Sunset on the beach 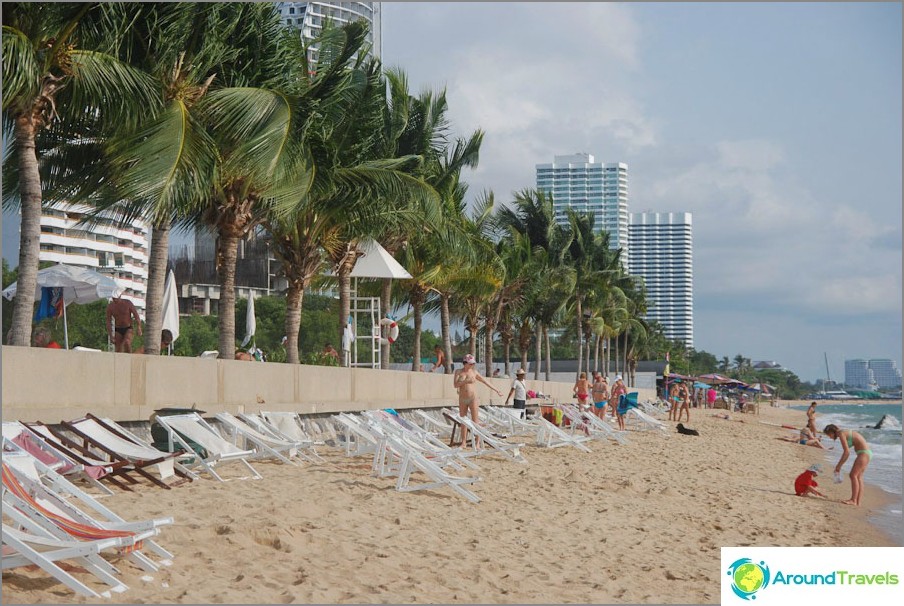 View towards the yacht club 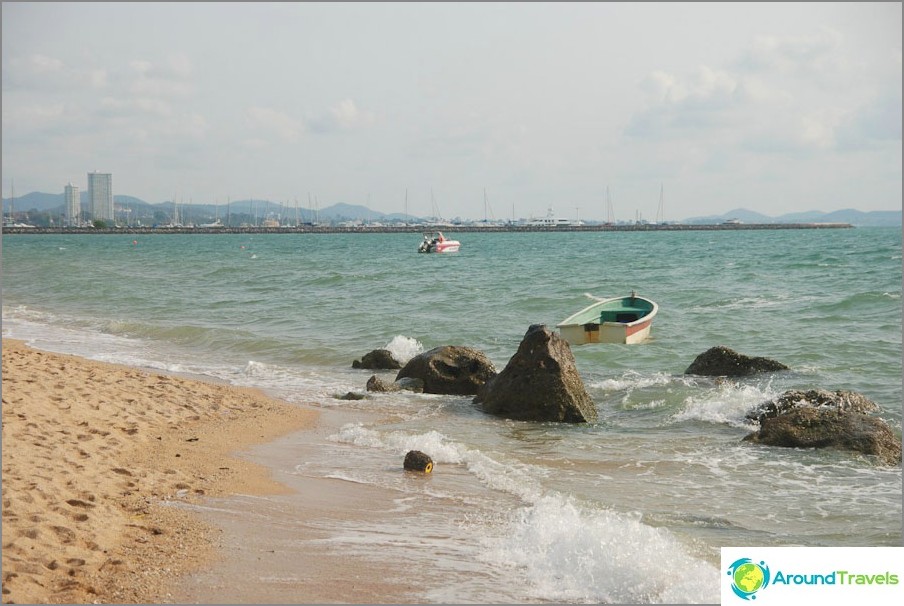 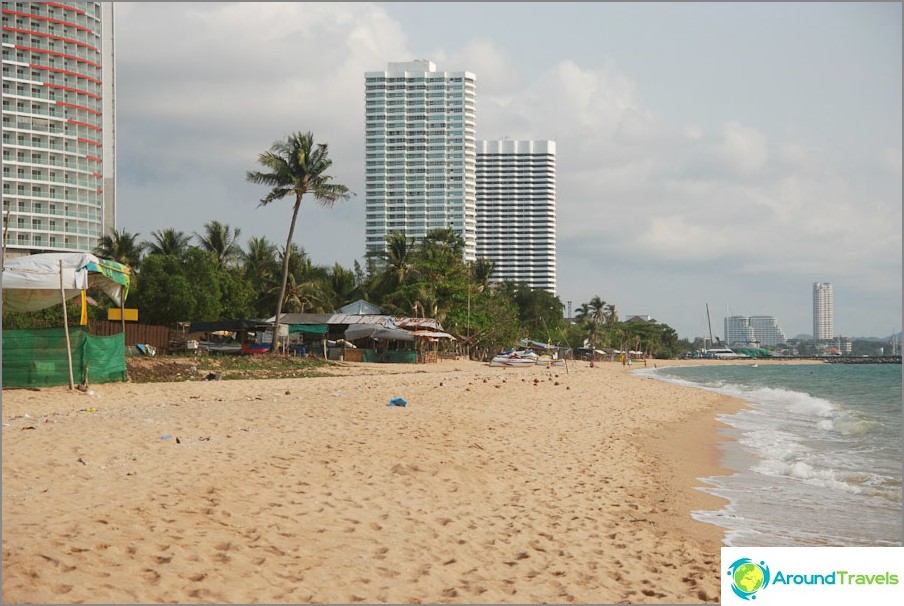 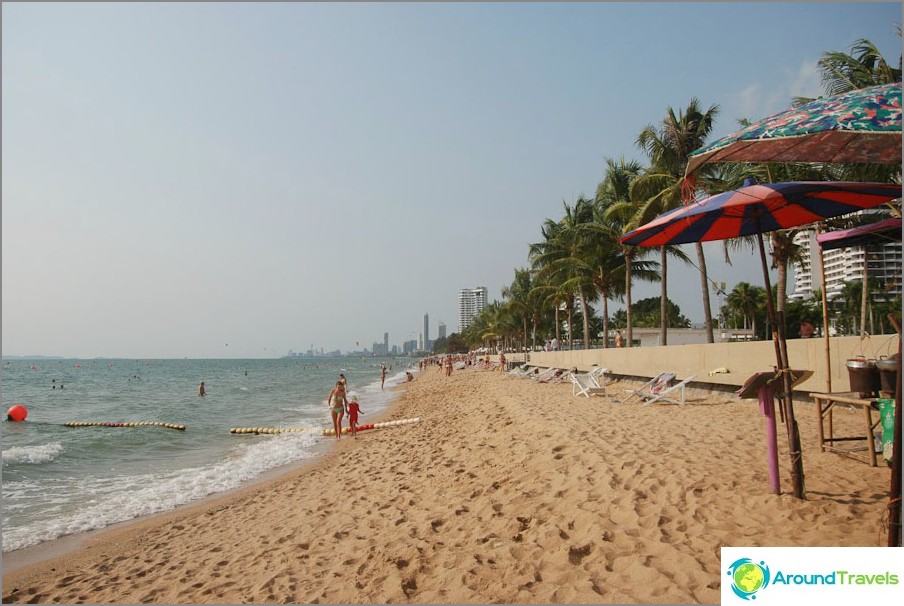 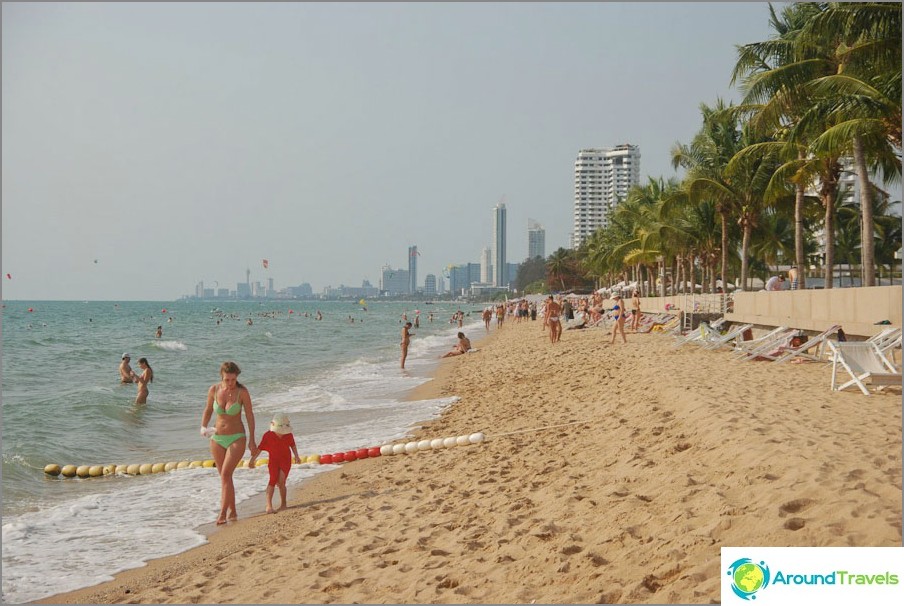 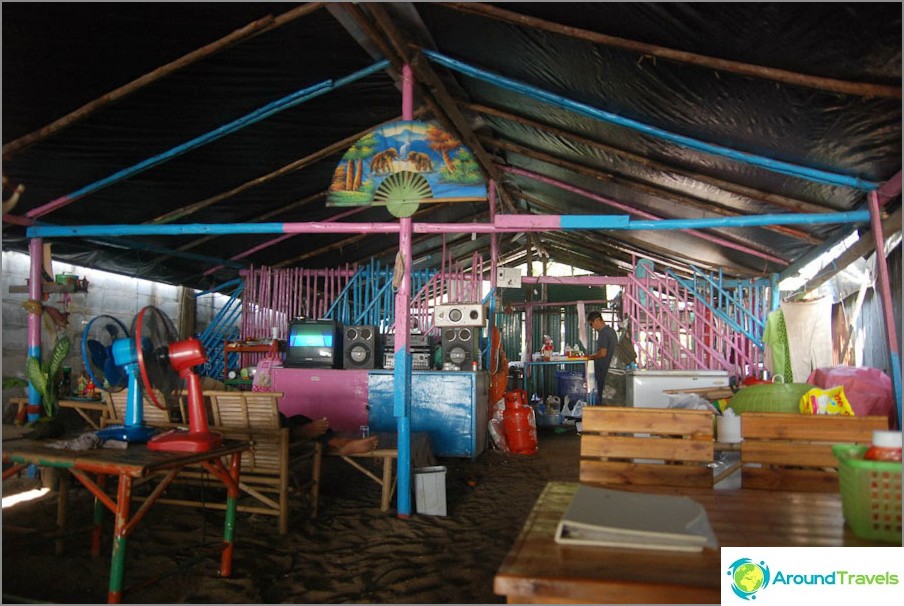 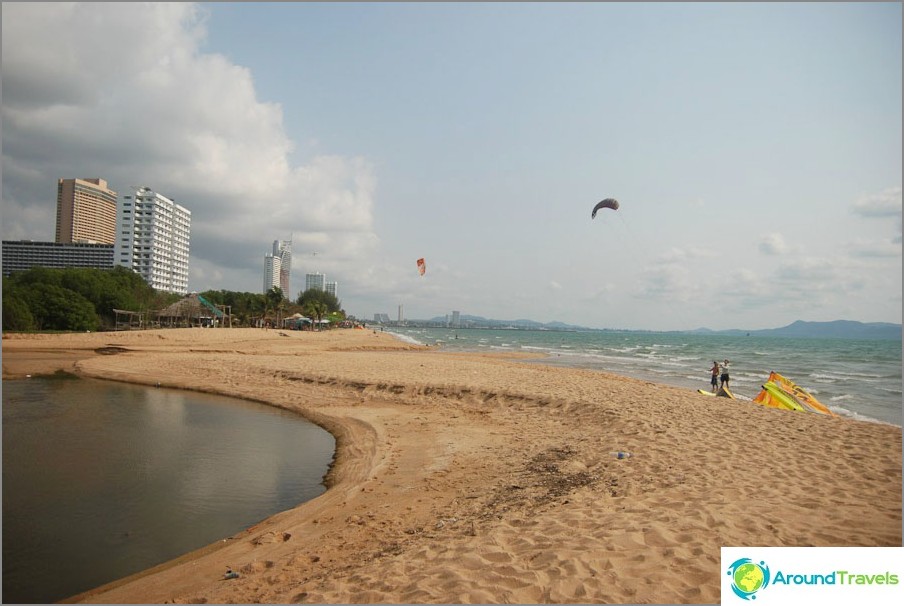 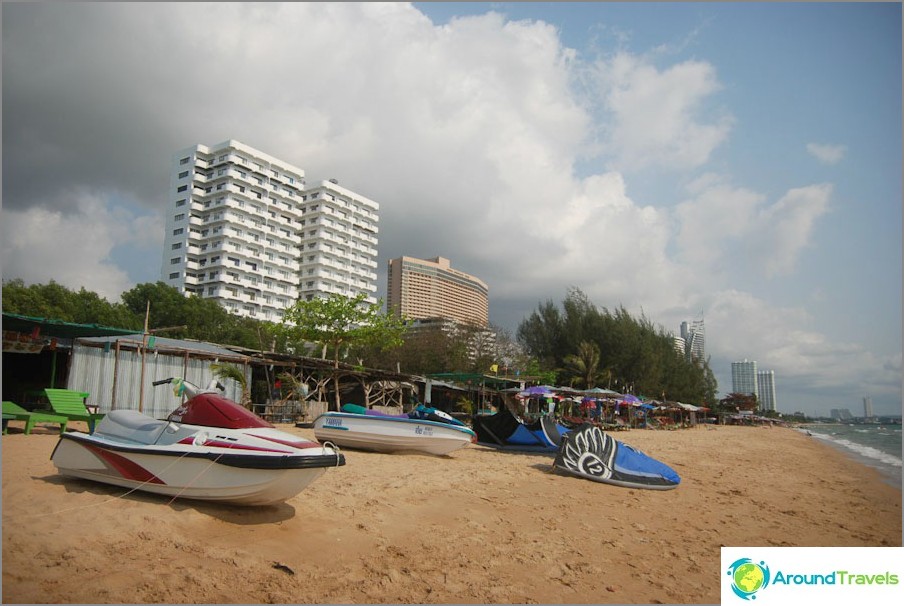 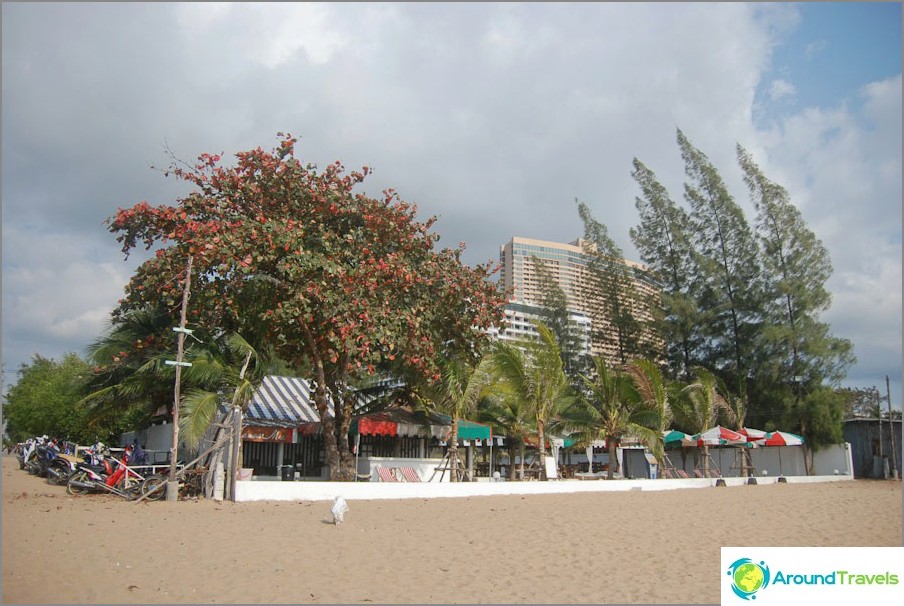 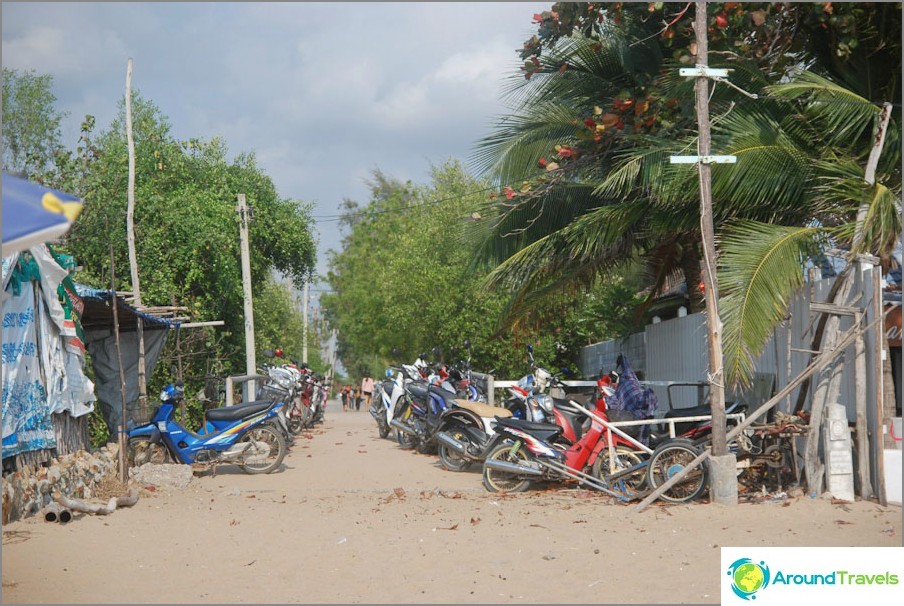 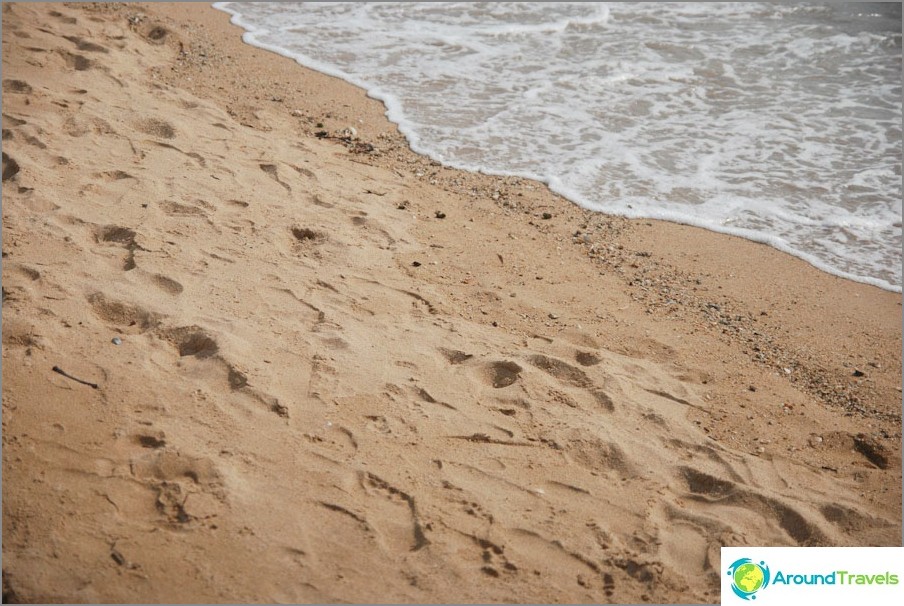 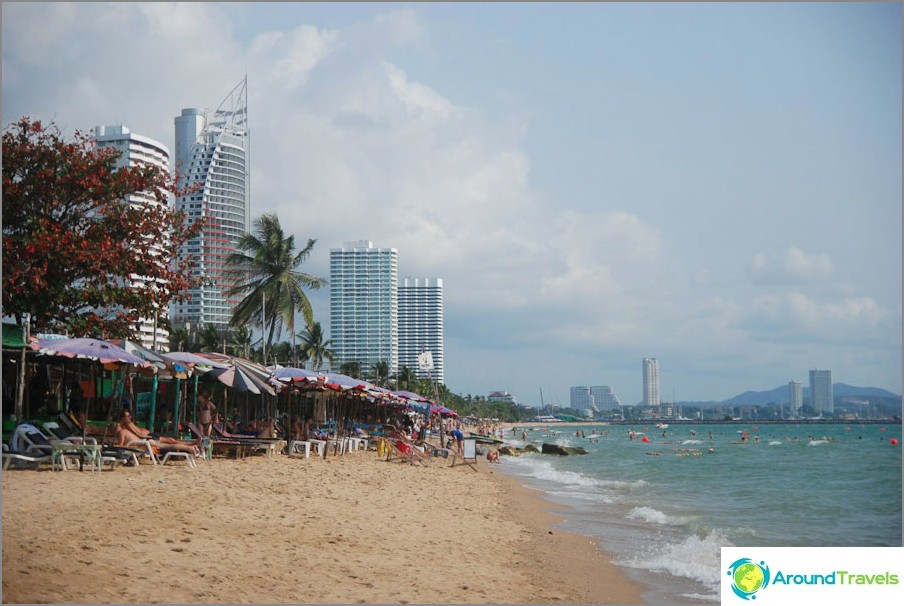 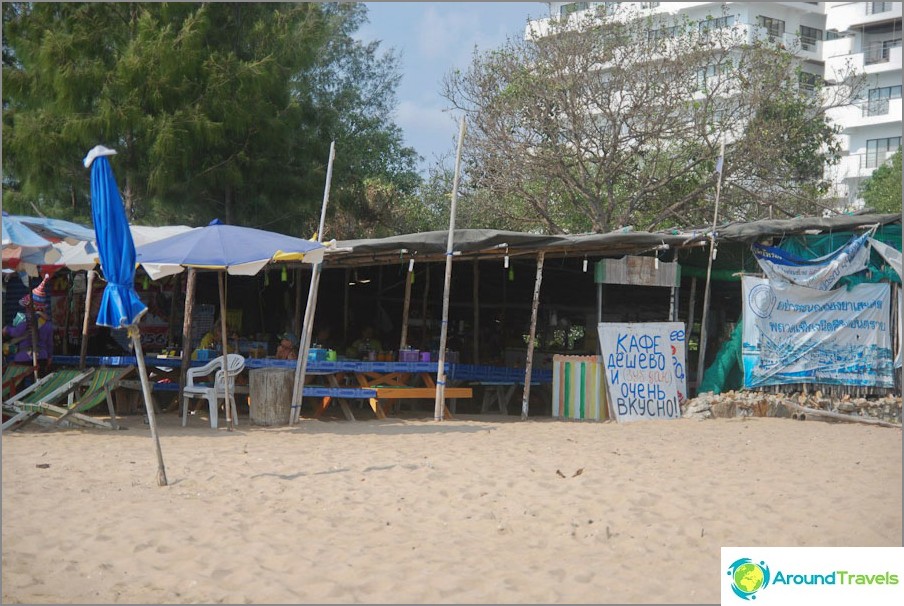 On the territory of the Ambassador complex there are several cafes and a market (things, souvenirs, fruits), nearby, but outside the territory there are also Family Mart and 7-Eleven shops. Across the road (Sukhumvit) you can also buy fruit, there are Thai shops, cafes and a small evening market. There is also Mimosa.

An unusual shopping complex with boutiques and at the same time an attraction, built in the form of a small European town with a town hall, canals, fountains. In the evenings there is a transvestite show. For the Ambassador's guests, entrance to Mimosa is free.

If you walk towards Pattaya along the beach for about a kilometer, there will be two nice restaurants: Bacco and Glass House. About the middle of the road to them, where the river flows into the sea, at the end of February-March, when a strong wind blows, kiters usually train. On the other side of the Ambassador, in the south, there are the beaches of uncrowded expensive bungalow hotels and a yacht club.

There is also a large new water park called the Cartoon Network nearby, and for children there is an Exotic farm on Sukhumvit, with attractions and a small zoo, and the Greta farm with pets, trampolines and a large area..

In addition to the Ambassador hotel complex itself, in the beach area, closer to Bakko Beach, at the confluence of the river into the sea, there are B2 View Pattaya Hotel, Lemon Grass Retreat. There are several hotels between the Ambassador and the Yacht Club.

They are believed to have their own private beaches. But still, physically, this is one beach. Between the hotels and the Ambassador there is a strip of wasteland, which will probably also be built up later, behind it are the high-rise buildings of Reflection Jomtien Beach, Dor-Shada, Ravindra, close to the marina is the bungalow hotel Botany Beach .

There are no houses, like small condos, directly on the beach, but what is available is located at such a distance from the sea that it can be attributed with the same success not only to the Ambassador, but to other beaches of the Na-Jomtien area..

The hotel, and, accordingly, the Ambassador Beach, are located outside the city of Pattaya, but not very far, 10 km from the city center. Since the Ambassador is not even a hotel, but a huge complex with its own infrastructure and everything necessary for a tourist, you don't have to go to the city.

However, it is very easy to get to the center - the Ambassador's territory on one side overlooks the sea, and on the other - on the Sukhumvit highway. Route tuk-tuks of white color run along it.

The Ambassador always, and especially in the evening, has several tuk-tuk in the direction of the city at once. You can wait until it fills up, or you can take it off like a taxi. In the same way, you can get to the Ambassador from Pattaya - by Sukhumvit, either by taxi or by white tuk-tuk. You can get to the beach not only through the hotel, but also along the 18th street of Na-Jomtien.

Beach map of the Ambassador hotel

Beach map of the Ambassador hotel: