Recently in May my friends and I went to Italy and rented a yacht for five. We walked around Sicily in the Aeolian Islands. So, renting a yacht, divided into 5 people, turned out to be ridiculous. The yacht has been on mine for a long time was on my list of things to try.

For some reason, it is believed that a yacht is very expensive, but in fact this is not at all the case. You just need an unorganized tour «Full construction» buy, but find a captain among friends who needs a team. Yes, yes, it happens, and in the end everything is in the black. Captains also cannot always find sailors outright, but they want to sail. The result is mutually beneficial cooperation, and not the provision of a captain's service for separate money..

By car in Sicily

In order not to fly to Italy just for the sake of the yacht, we decided to travel a little more on it by cars for the first 3 days. We took two: Smart For Two and Opel Corsa. For some reason, one minivan was more expensive than 2 small cars. However, I was not at all upset, I have long wanted to travel on a smart phone, to feel what it feels like.

In fact, it turned out that the car is excellent. Small, nimble, economical. Ideal for parking in tight spaces, turning radius is generally fire! While you are driving, you do not feel at all that the car has no ass and you drive only half of the car. The smart has quite a lot of space in the front seats and the doorways are wide. The trunk is too small, yes, but for short trips without children, a couple of small backpacks fit without problems.

We flew to Catania, not Palermo, as we wanted to see the east coast, and closer to the marina in Portorossa, where we had to pick up the yacht. Lived 3 days in Catania and drove around the area.

We arrived in the morning, so on the first day we managed to walk around Catania, took a sightseeing tour bus for 15 euros. On the second day we went to Syracuse and Noto. On the third day we visited Mount Etna. And on the fourth, on the way to the yacht marina, we stopped in Taormina, where I tried cannoli. Such a program is at least.

All of these cities are pleasant and watchable. No skating. Dirty and shabby city. And the atmosphere in it is not the same, at all. Most of all I liked Taormina, a very nice and tidy town, with views of the sea and the surrounding mountains. I wanted to take a picture of every corner, so ennobled. Although I was only on one tourist pedestrian street, perhaps everything is different on the outskirts (as in Catania, for example). 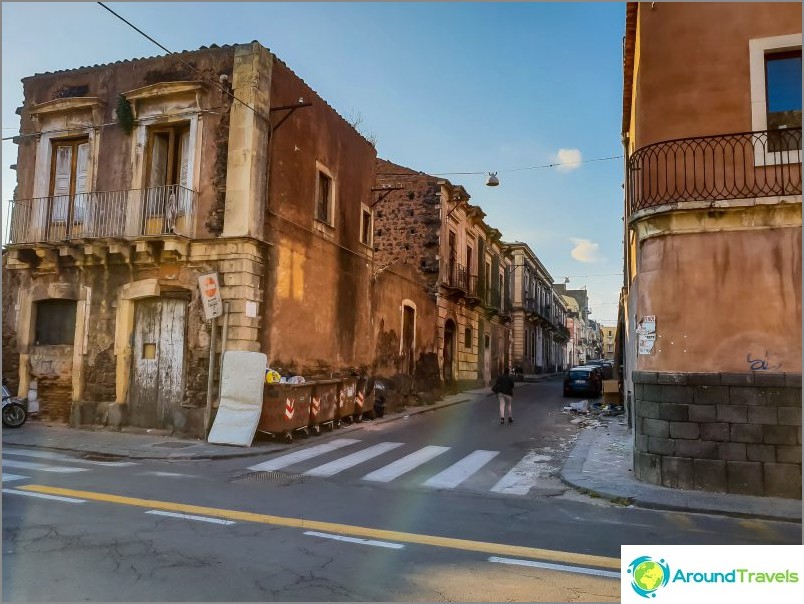 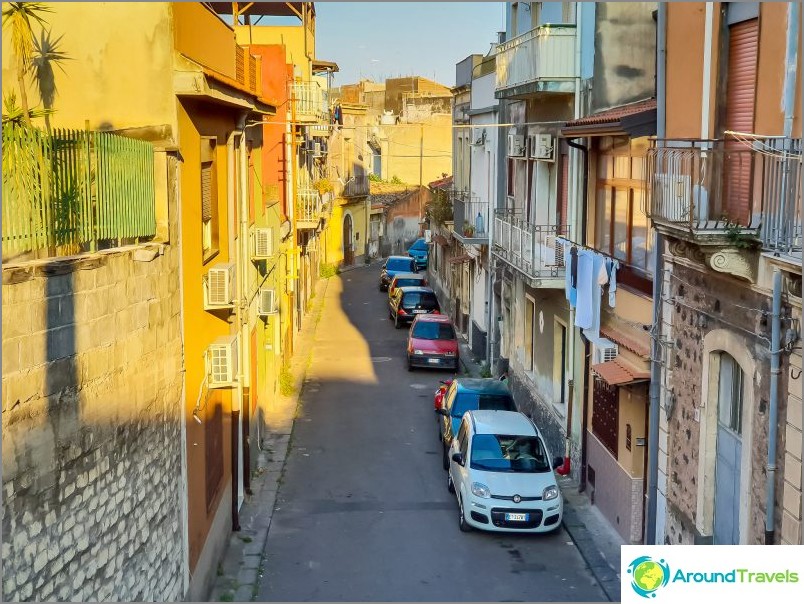 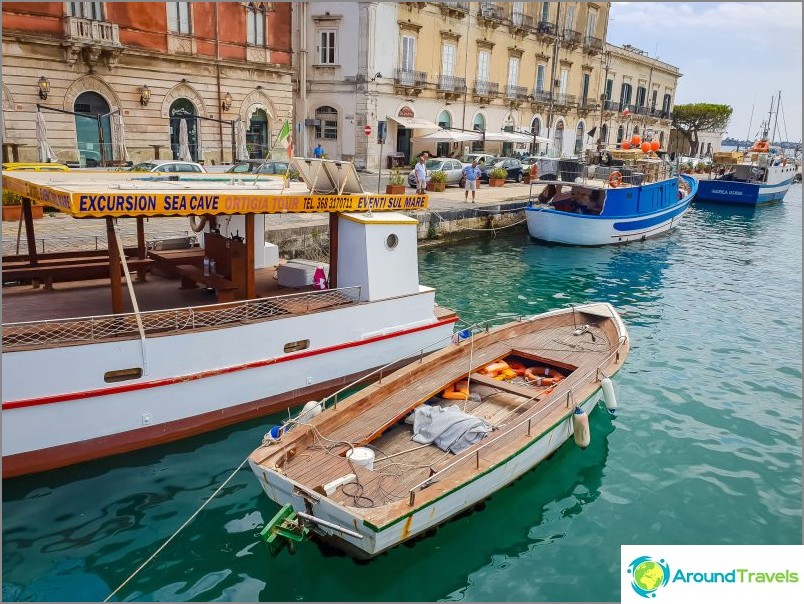 Syracuse is not a bad city too 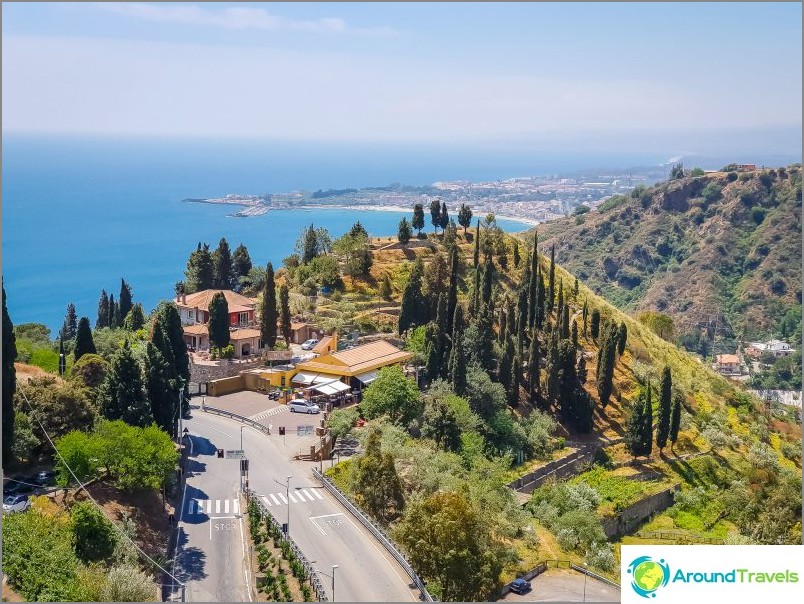 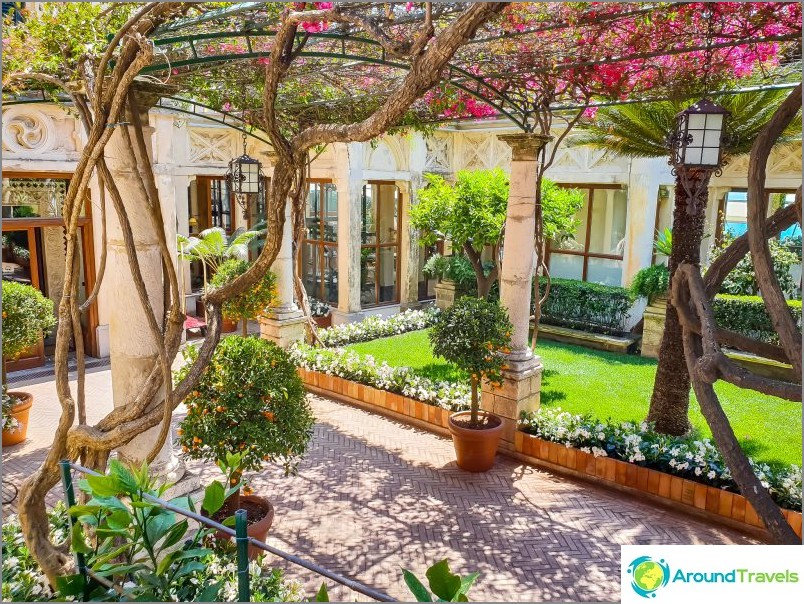 There are flowers everywhere in Taormina

Sights, except for the volcano, have not been seen, it is useless if you have only 3 days. The most thing is just to walk along the narrow streets, sit right there in cafes, sipping cappuccino and eating it with pizza or pasta. By the way, how do they not get fat if the main food is bread in its different variations?

Mount Etna left a disappointment after visiting. No lava, no smoke, plus just the darkness of tourists and everything is too over-organized. First the cable car, then transfer to the bus, then the guide leads to the crater. We stayed near the crater for only 20 minutes. Perhaps there are more serious excursions, with trekking on a less tourist route, but I did not recognize.

Sicily as a whole did not come to me. It turned out to be enough for me to go to see it once, it is very unlikely that I will return again. Something wrong. Do not know. 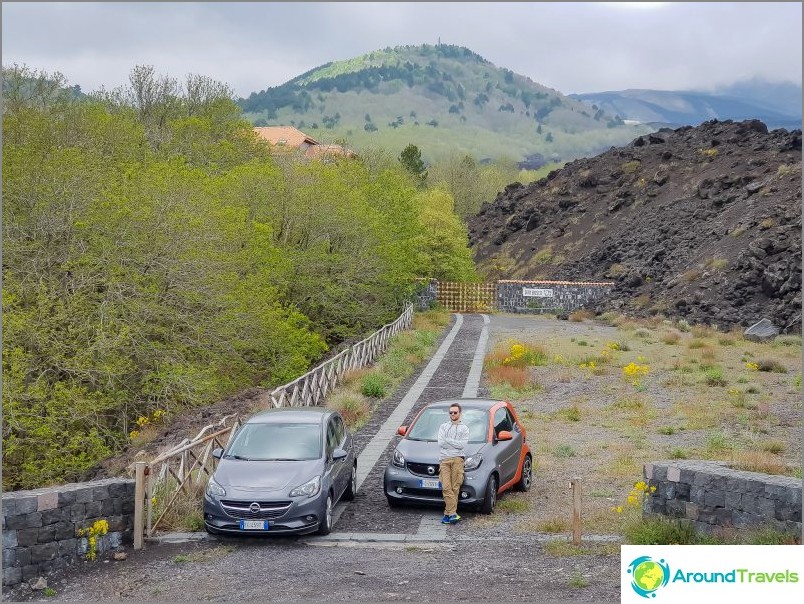 On the road to Etna, Sicily

Around one solid volcanic lava

Mount Etna, at the very top near the crater 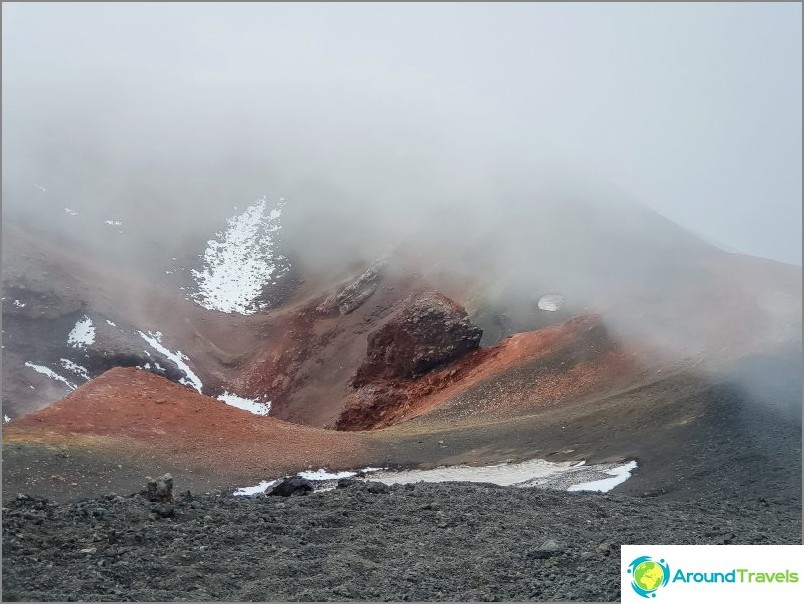 Very often everything was in the clouds and nothing is visible

One-way tickets from S7 Moscow-Catania - 8200 rubles. I flew back through other countries, otherwise I would have taken right there / back for 15 thousand rubles.

Smart for two on the machine cost 15 thousand rubles for 10 days, or 1500 rubles per day. There was no full insurance, only one that by default with a deductible is something around 1500 euros. The deposit was 900 euros, it was frozen on a credit card. Booked through the standard through Economybookings.

The rest of the guys paid for the Opel Corsa on a manual box 9 thousand rubles for 10 days, or 900 rubles per day. For me, that's a very good price, if you divide it into three. If I'm not mistaken, they booked through Rentalcars. You just need to look at prices in all search engines, prices differ, there is no universal one.

The cars were taken exactly for 10 days, and not for 3 days. And all because from Portorossa it will be almost more expensive to get from Portorossa to Catania airport than renting a car for an extra seven days..

Instead of a hotel, they rented an apartment through Airbnb. Sign up using the link and get a $ 32 discount from Airbnb on apartments around the world. Valid for the first booking, booking must be from 70 $.

We rented at once for 5: 2 bedrooms, a living room, 2 bathrooms, a full kitchen and a terrace with a green garden (we lived on the ground floor). For 3 days they gave 12 thousand rubles. For me, this is also excellent - only 800 rubles / day per person.

Ascent by cable car - 30 euros. The bus from the upper station of the cable car to the volcano is 25 euros and then the guide is another 9 euros. Etna T-shirt - 15 euros.

On a yacht around the Aeolian Islands

Our route was simple and lasted for a week. This time is quite enough for the first time. I had more than enough. We managed to spend the night several times in marinas and at anchor not far from the coast, try to operate a yacht and sail, explore several Aeolian Islands and a volcano, swim in the sea and ride a motor boat.

It seems to me that for the first time this is exactly what you should do, because it is not a fact that you will need yachting itself and only yachting. But the second time, it will already be possible to adjust your plans and add what you need.

Vulcano Island is the most boring one, I don't even know what to do on it. Yes, you can climb the volcano there, but there is nothing to see except for sulfur fumes. Marina is also so-so, without any additional services.

Lipari Island is the most developed of the whole group. Nice town, narrow streets, you can spend the whole day walking around it. Marina is not bad too.

Panarea Island is the first anchorage, so to speak. They didn't even land on the island, there is nothing to do there.

Stromboli Island is the most credible island, it is not for nothing that there are even excursions from the mainland to it. There is a really active volcano on it, with constant small eruptions. To see something, you need to go upstairs (ascent 3 hours), usually they go closer to darkness, so that you can see better. The ascent is difficult. But I am telling this from the words of other people, because my friends and I went the other way - bypassing on the other side and without a full ascent to the crater. It turned out that we saw even more than those who climbed to the very top along the standard route on the same day. In reality, we saw red flashes with sparks and flying out red hot stones..

By the way, near Stromboli we also anchored, so we sailed to the island on a tuzik. This is a separate entertainment.

Salina Island is the best marina, fenced off so that there are no waves, with hot showers and wifi. Who would have thought, we almost passed by. The town is very small, several times smaller than on Lipari, but nevertheless pleasant. One magical narrow pedestrian street. We got high and relaxed there.

If I removed all the activities, I'm not sure that I would have had enough impressions. 2-3 days was enough for me to taste yacht crossings on a motor and sail, steering a boat, mooring in narrow places. But we had 7 days, so walking around the islands, visiting a volcano, swimming in the harbor, taking turns ascending on a winch to a swinging mast, riding a motor boat - all this perfectly complemented the trip..

I am definitely not a sea wolf and love the land more, but if you make such a varied sea voyage, then very much. Only snorkeling was not enough, but the water was still cold for him. 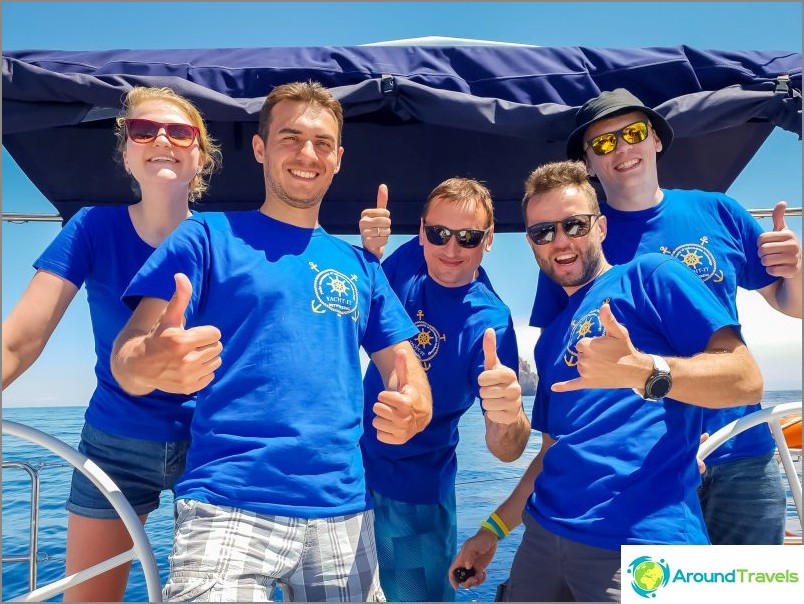 Our team with a captain 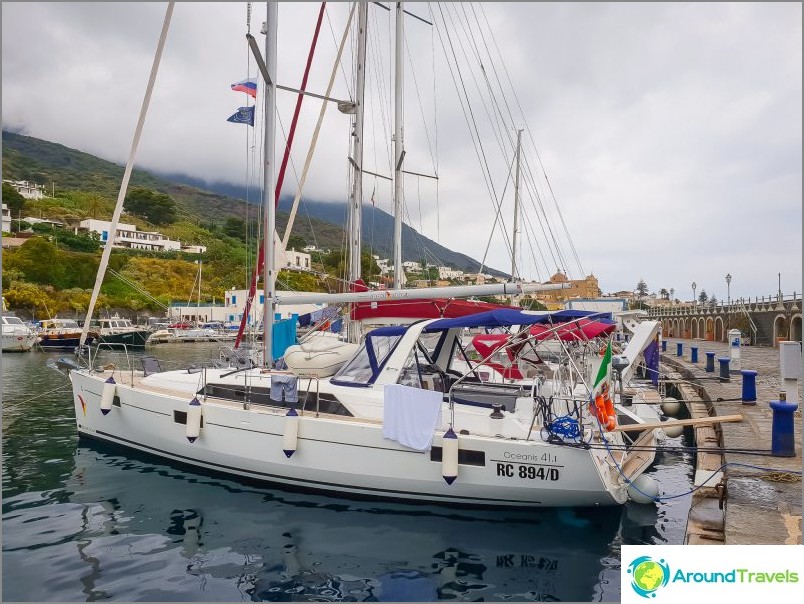 And this is our yacht Oceanis 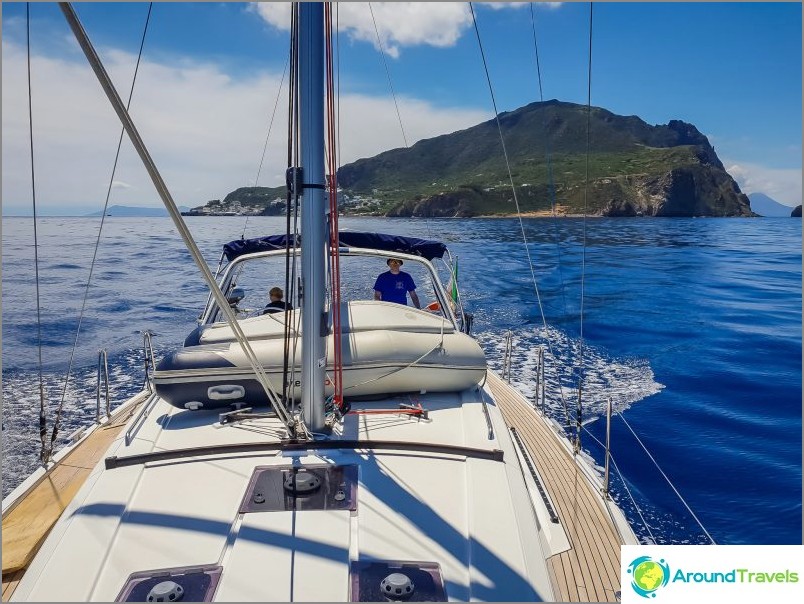 If you love sea views, then you definitely need to go on a yacht 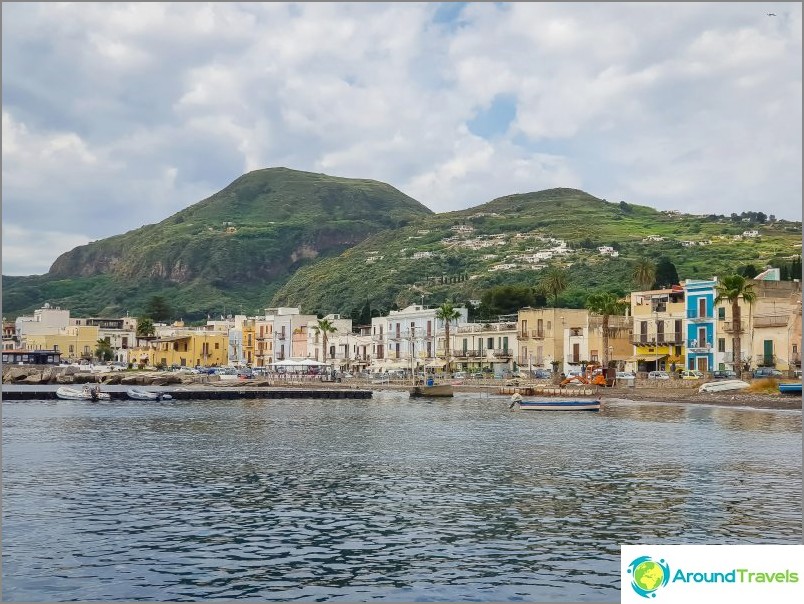 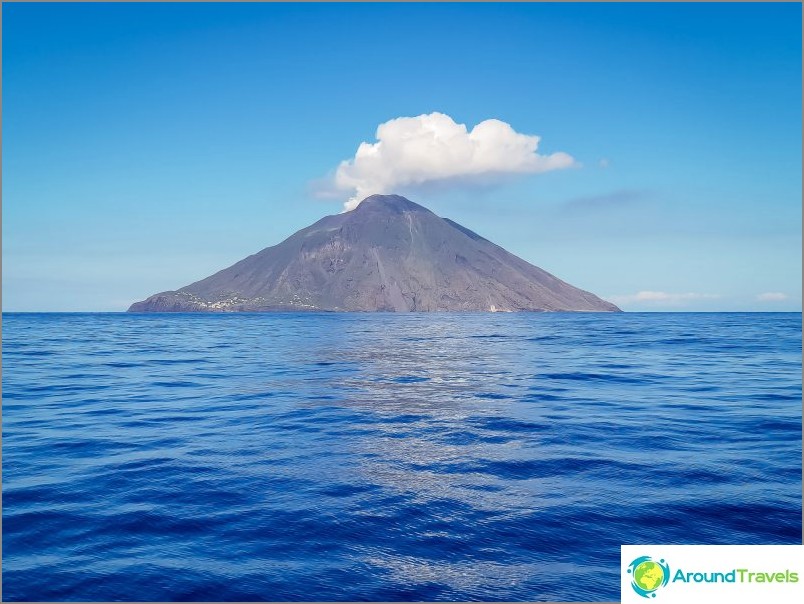 Stromboli Island with an active volcano 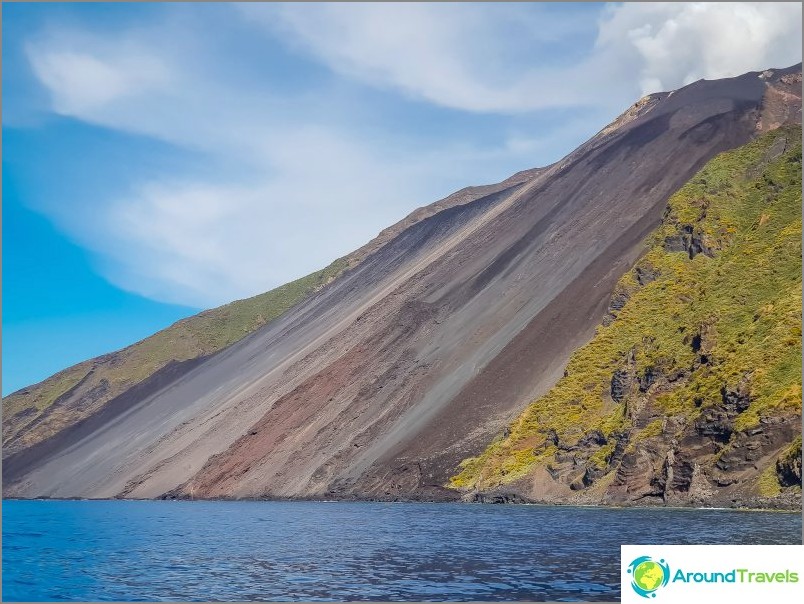 Lava flows down into the sea 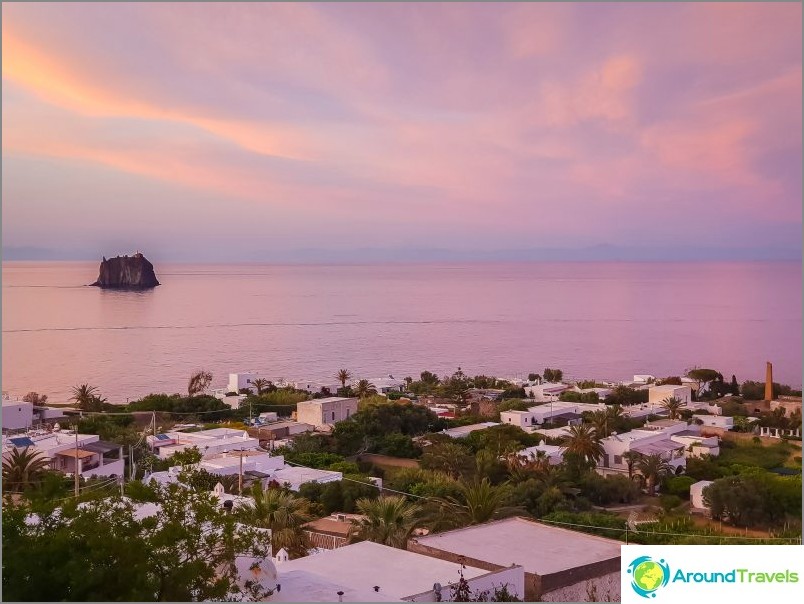 One of the entertainment is on the winch to the mast 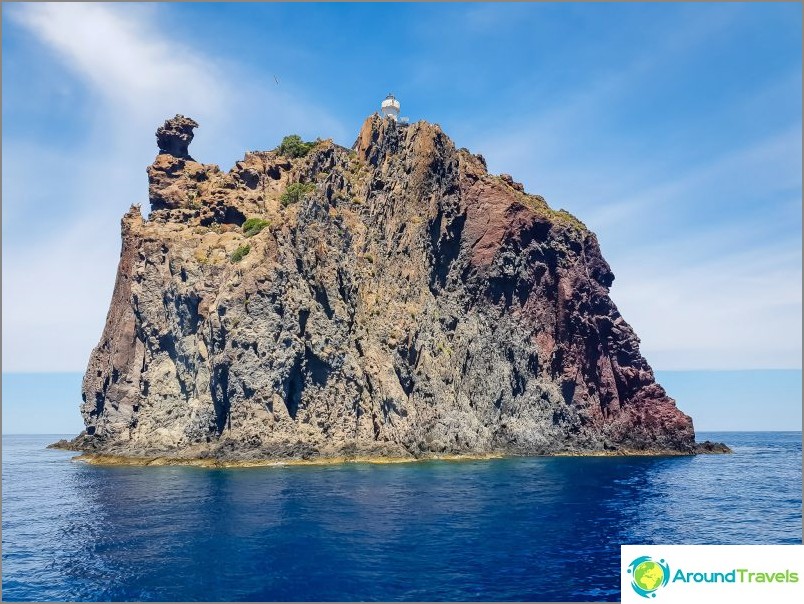 Tiny island with a lighthouse 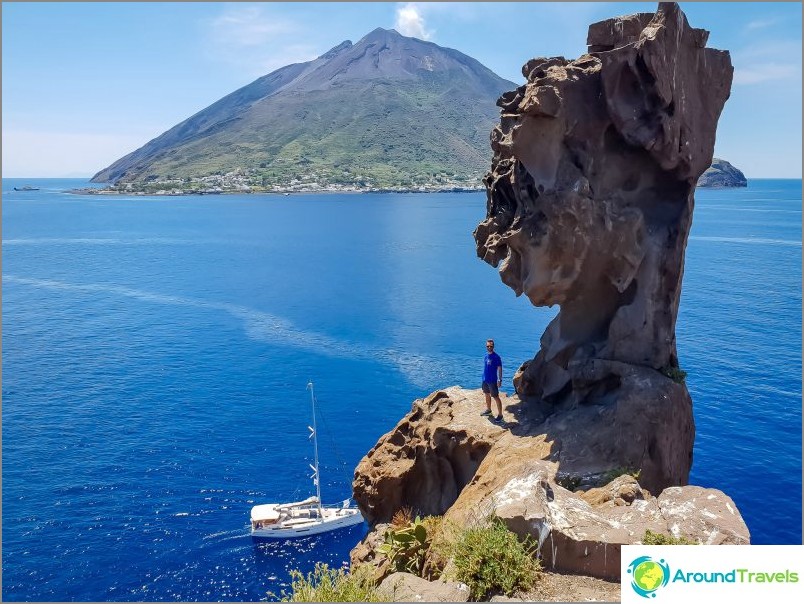 View from this island to Stromboli

Everybody got certifications, now we're cool

The price of a yacht in terms of 5 people is also not very high. In fact, the yacht was designed for eight, but we didn't have that many. Well, only six people are comfortable there, since there are only 3 double cabins (just 6 people) and if there were more, then two more would have to sleep in the wardroom, and this is already cramped.

The yacht was taken for 7 days. Prices for the entire period at once:

The total is 450 euros per day, or only 65 euros per day per person. Not bad? Inexpensive hotel in Europe costs so much.

P.S. Does anyone have a similar experience? How much did you get?