Haad Rin Nai beach - comfortable for living, but not for swimming

There are two Haad Rin beaches in Phangan. Little Haad Rin Nok is the beach that hosts the monthly Full Moon Party, I already wrote about all this here. And the big beach is Haad Rin Nai, which, unlike its party namesake, is much quieter and is far from swimable everywhere..

Almost half of the right side of Haad Rin Nai is located under the steep slopes of the mountain, the beach is often interrupted by stone deposits, or simply divided by rocks into small mini-beaches. And the center and the left half are well settled and even have their own pier with an artificial harbor..

I will not name the exact length of Haad Rin Nai, something about one and a half kilometers. The fact is that on the right, it somehow imperceptibly passes into the Ao Hin Lo beach, and even the Thais could not tell me where exactly, so this division is very conditional. Ao Hin Lo then moves to Bang Tai, but we'll get to him later..

Haad Rin Nai faces southwest and offers a magnificent view of Koh Samui and the sunset sky. By the way, both Had Rin are sometimes distinguished in a conversation: Hadrin Sunset Beach and Hadrin Sunrise Beach, that is, sunset and dawn Hadrin.

The width of the beach and even the composition of the sand on Haad Rin Nai also differ from Haad Rin Nok, because the geographical position of both beaches on opposite sides of the cape in this part of the island affects. The beach here is so narrow that in some areas, the tide almost completely hides all the sand..

The owners of nearby resorts were even forced to strengthen the embankment from erosion by creating low stone and cement walls. At the same time, in this architectural way, the private territory of the resort is delicately separated from the public beach..

The sand on Haad Rin Nai is dark yellow, coarse, with a lot of coral debris and stones. The bottom is rocky almost along the entire length of Haad Rin Nai, some of the resorts have been cleared in places. The coast does not go under the water under a steep slope, that is, it remains shallow enough even at high tide. The shoulder depth is about 10 meters from the shore. Waves usually only occur in strong winds.

As I wrote above, the narrowness of the beach does not allow it to be fully used for a beach holiday. The sunbeds are all on the territory of their resort, and the main shade is also there. Occasionally, there are varieties of mangroves on the beach, on which hanging hammocks can sometimes be found. I shot in the central part of Haad Rin Nai and then moved to the left, closer to the pier and Haad Liila.

On the right side of the beach, I decided not to meddle, because there it is quite difficult to go around the rocky headlands by the sea, and going around the top is no less tiring. But visually, even from the pictures, you can see that a normal amount of greenery is growing there, which, mixed with rocks, gives a good natural shadow.. 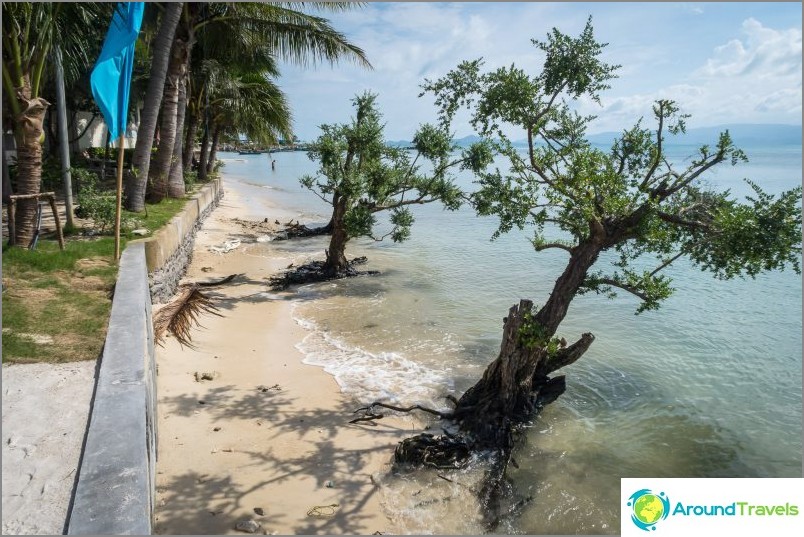 View to the left from the territory of the resort 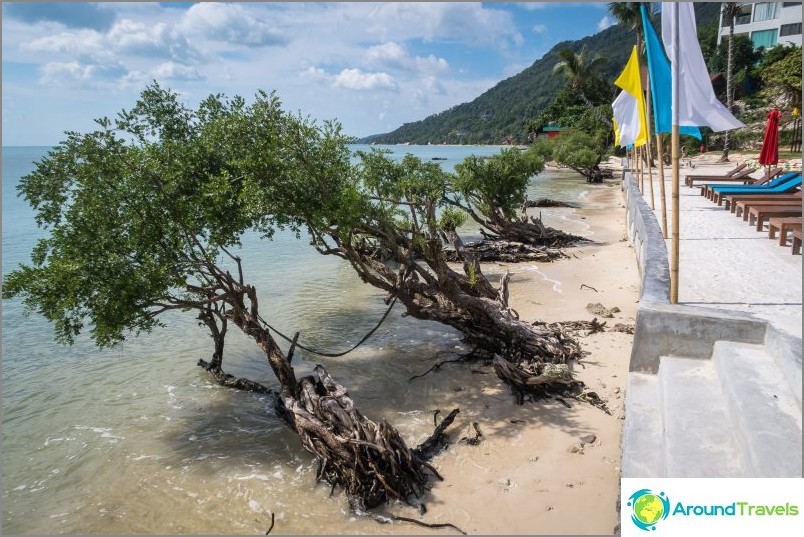 View to the right - mangroves on the beach 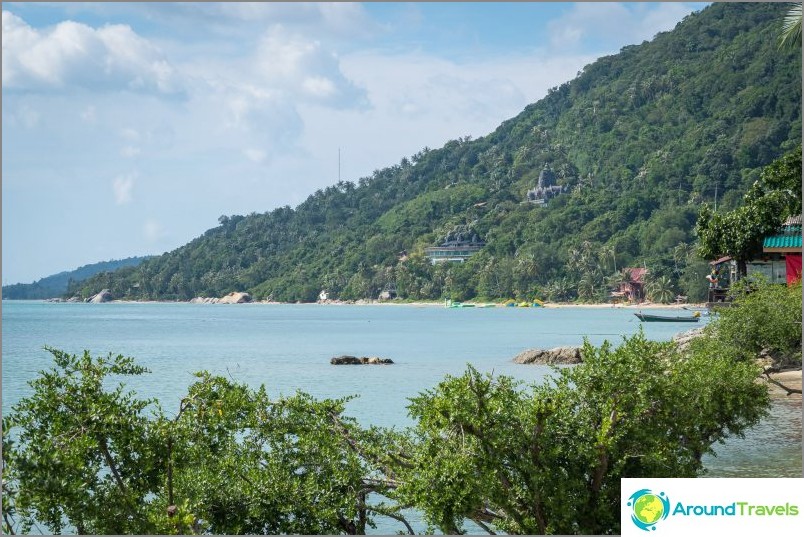 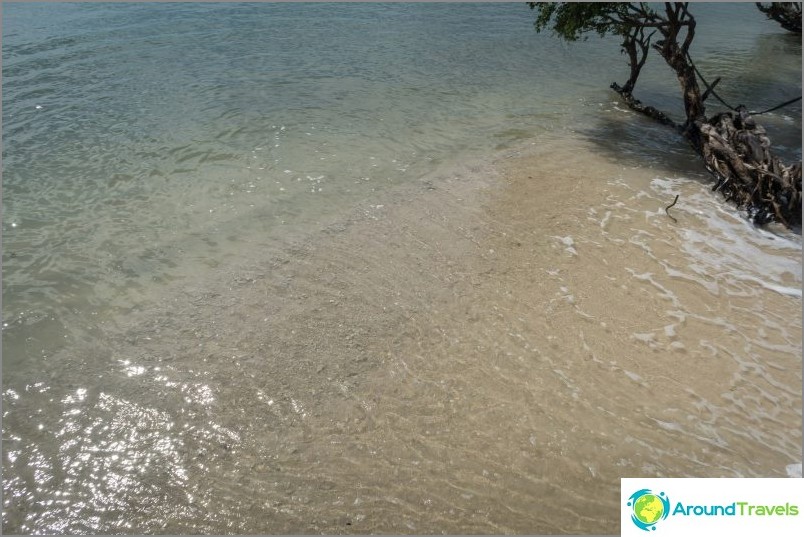 If you look directly, you can see large pieces of coral under the water.. 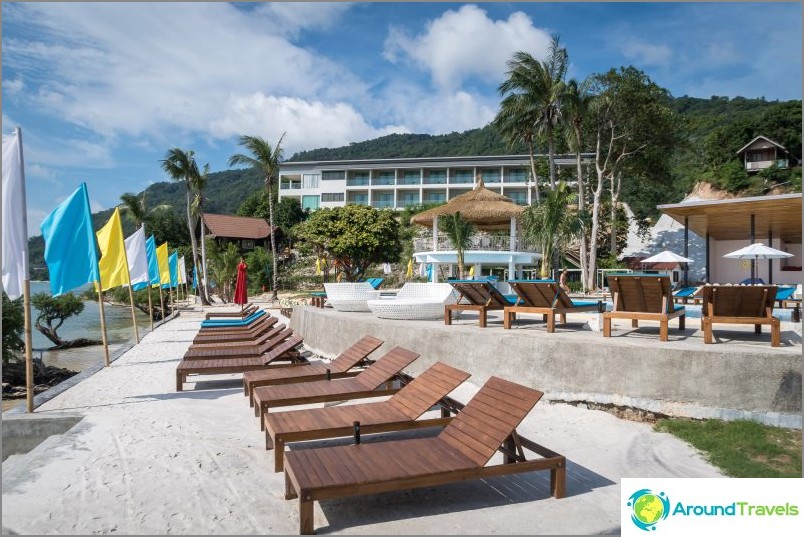 Sun beds - only on the territory of the resort 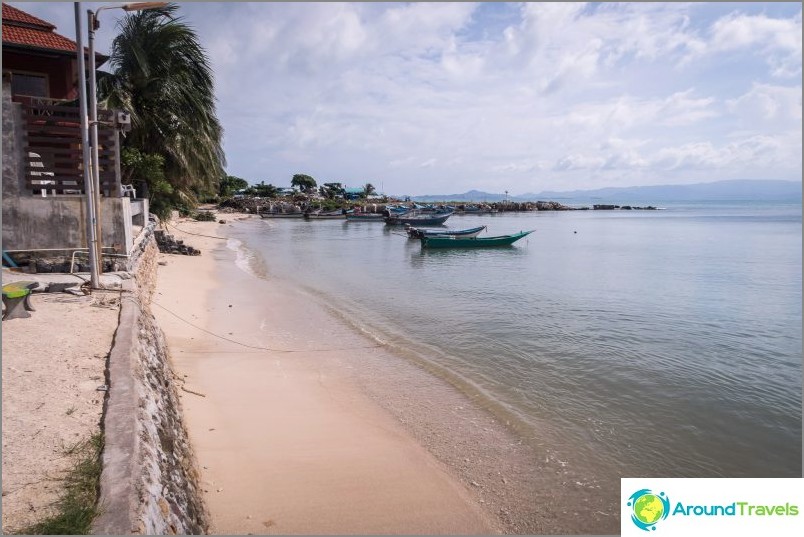 View to the left of Charung Bungalow 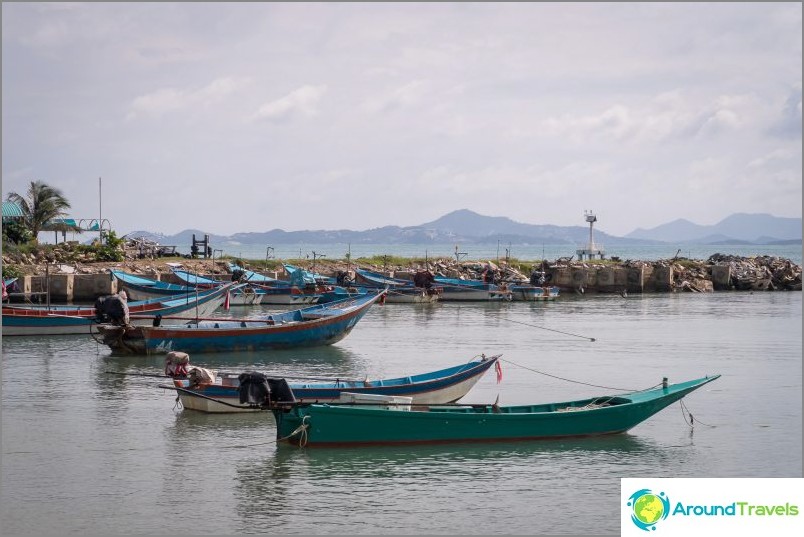 And then - an artificially created harbor for boats and boats near the Haad Rin Nai pier. 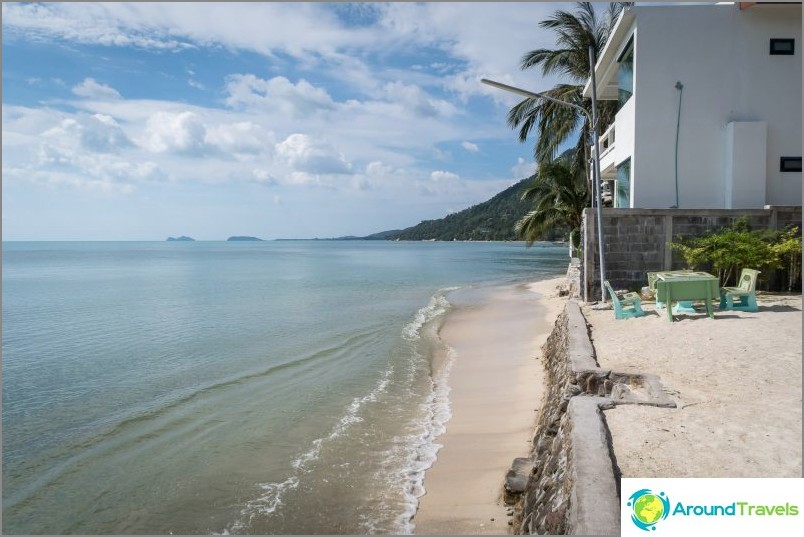 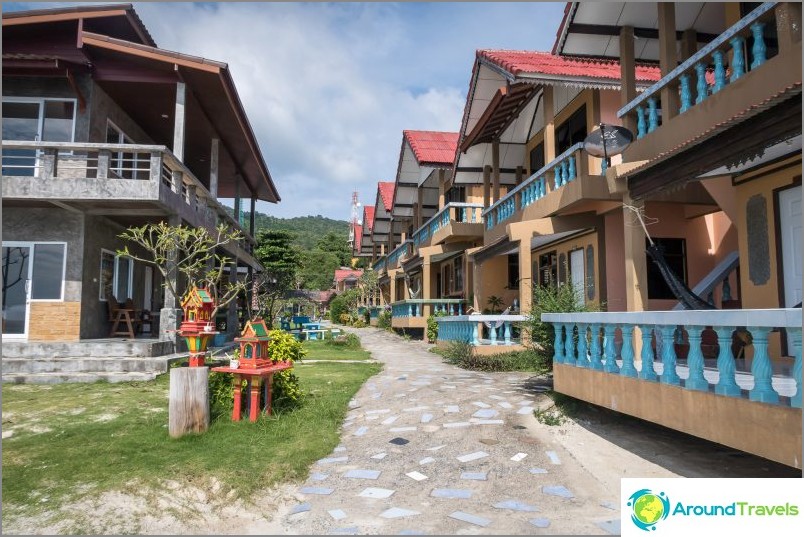 View of the resort from the sea 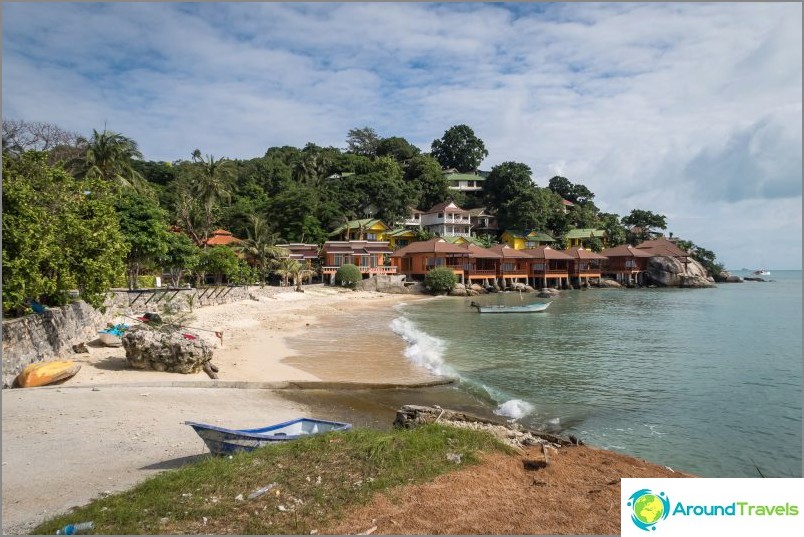 View from the pier to the left 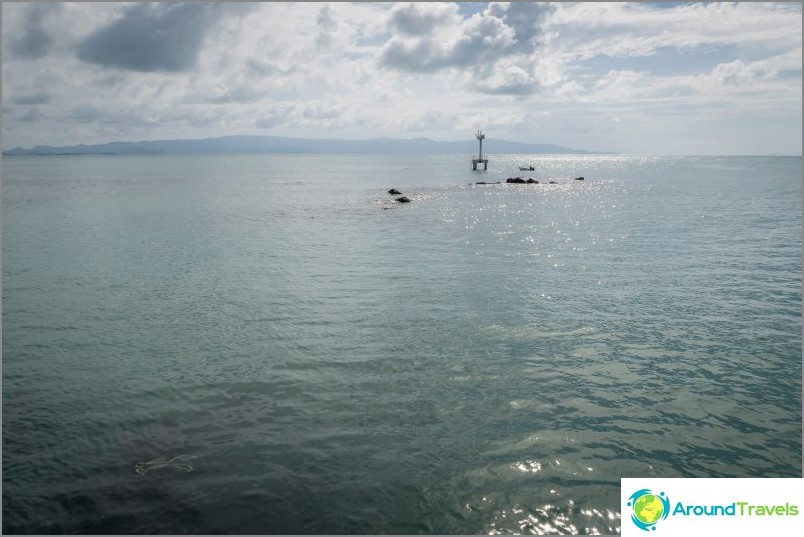 Sea view from the pier 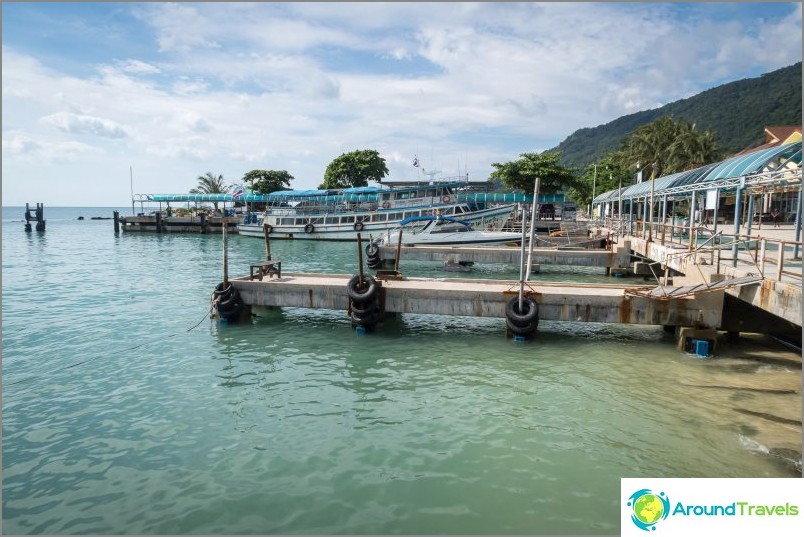 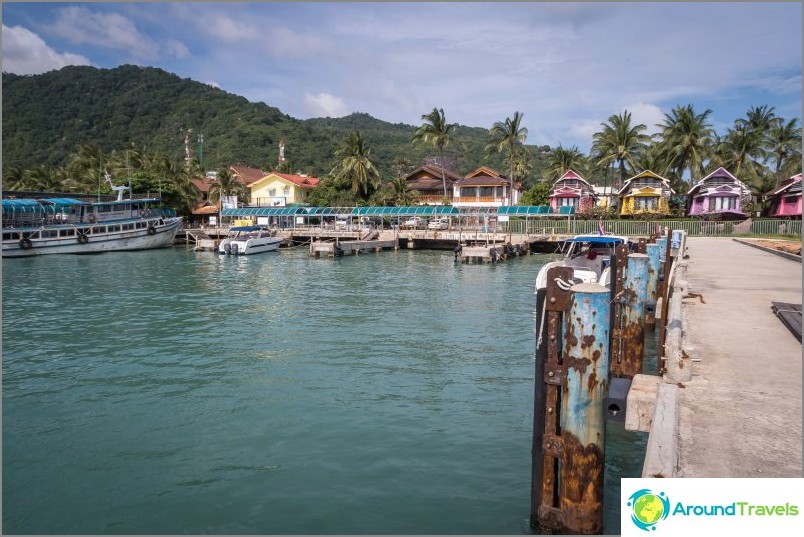 This part of Koh Phangan has a relatively flat surface between the mountains on the main part of the island, and a lonely hill at its southernmost point. So, the entire infrastructure of both Haad Rins is actually located on this flat patch. Little Haad Rin is the hangout center of the whole of Phangan, and I would say that the infrastructure in this area is probably the third most developed, after Tong Sala and Chaloklama.

I will not list all the buildings present, I will say in general terms: there is everything you need for relaxation or longstea, from massage to shops, there is a 7-Eleven. Haad Rin Nai rests on the plain with its left edge, starting from the center of the beach. There is also a pier. And the right side of the beach, from the center, is mainly resorts and detached villas.

Of the attractions on Haad Rin Nae - there is a good water park Koh Phangan Water World.

A very large, I must say, choice of housing for a beach of this size and with such geography. The center and the left side of the beach are occupied by solid wall resorts, with the exception of the area around the pier. And the right half of the beach, after the water park, is a steep mountainside, on which it is rather difficult to build, but still there are several noteworthy places.

Or the Angkor Wat-styled Le Palais hotel. By the way, I walked around the territory of the Sunset Beach Club Hotel, I personally liked everything visually, and the rating is also good.

And here is another selection of the most sensible guesthouses and resorts with average prices and a good rating, to help potential fulmunists. Options for 1-3 nights where you can throw your backpack on Hadrin:

Finding Haad Rin Nai is as easy as finding Haad Rin Nok. Take the main road to the 7-Eleven corner, which is indicated on the map below, and then turn right. But in principle, starting from the moment you pass Le Palais, any turn from the main road to the right will lead you to the sea, you just have to leave the bike in the parking lot of the resort and walk to the beach on foot.

For example, I walked through the grounds of the Charung Bungalows without any problems. . 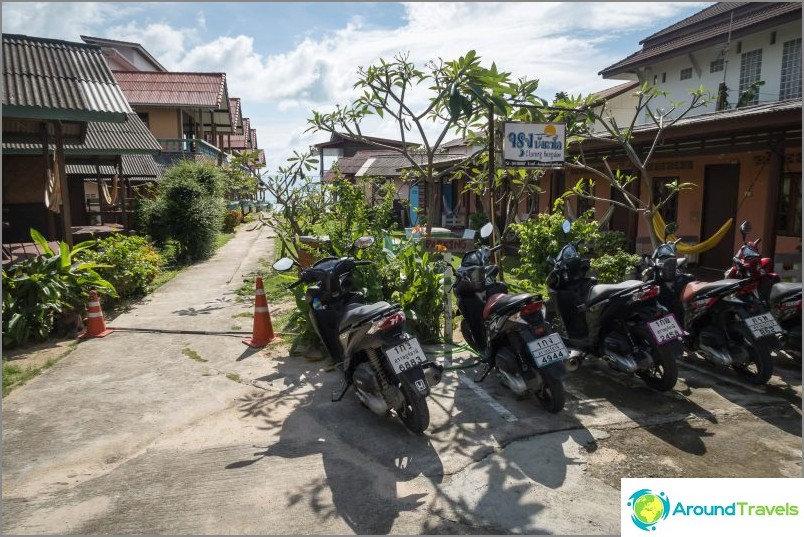