Many people speak positively about Leela Beach, saying that it is a very beautiful beach, almost the best in Phangan, but personally it did not cause any particular delight in me. Handsome - yes, the best - no. Perhaps because it is rather inconvenient to get here and the atmosphere by the beach is not one of those that I like. Well, or because I visited Koh Phangan at the end of the rainy season and the weather was not always happy with sunny days. And this, you know, does not help a positive attitude..

The beach is located at the foot of a steep slope along its entire length. Leela Beach is not in the category where you drive up to the sea anywhere, and without slowing down from the main road, you drop the scooter and go swimming. On my arrival in Koh Phangan (January 2017), the monsoons were just giving out the last wet chords, the road down was, for the most part, badly broken.

And in one place I had to leave the bike and go on foot. But there is a way out of this situation, I just did not immediately understand it, but more on this below in the section «how to find the beach».

The beach, indeed, we can say that it is beautiful, plus it is also quite long - it stretches for about five hundred meters from the rocks in the north to the rocks in the south. Based on the results of a walk along the beach, I would say that Leela Beach is great for a quiet, calm hippie high, but definitely not a family vacation..

Definitely - to live for a long time, I would not climb here with a child. Is that only for a couple of hours to swim: I was, I saw, my feet were wet in the sea. Well, in fairness, it should be noted that Leela Beach faces south-west, and therefore a steep view of the island of Koh Samui opens up from here on the horizon..

On the map, I put a marker where the territory of the CocoHut Beach Resort & Spa is located with a parking lot through which you can freely pass to the sea.

Sand on the beach «almost white», what «almost traditional» a phenomenon for Phangan; there are small pebbles with shells in the water, which are washed up by waves, the entrance to the sea is gentle, long, the depth increases gradually and the swimability of the beach is highly dependent on the ebb and flow.

On the shore you come across large boulders, the size of a small house, which looks funny against the background of real houses, which were built for hermits-tourists behind stones and low crooked trees. Throughout the beach, I did not notice any particular difference where it is better to swim, everywhere it was about the same.

Small, twisted trees grow along the entire water's edge, but these are not mangroves, because they do not have these roots characteristic of mangroves. Under the trees you can easily hide from the sun, and under some of them there are already swings and hammocks, in which people from houses often sleep or swing. The rest of the narrow coast is occupied by bungalows.

Keyword here «narrow», because at low tide there is still more or less a strip of sand, and at high tide the water rises under the trees themselves and there is no more room for a walk along the sea. 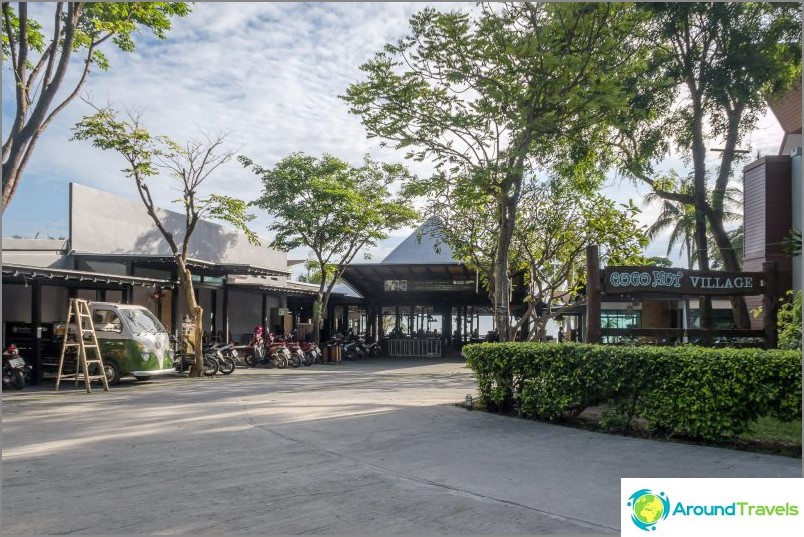 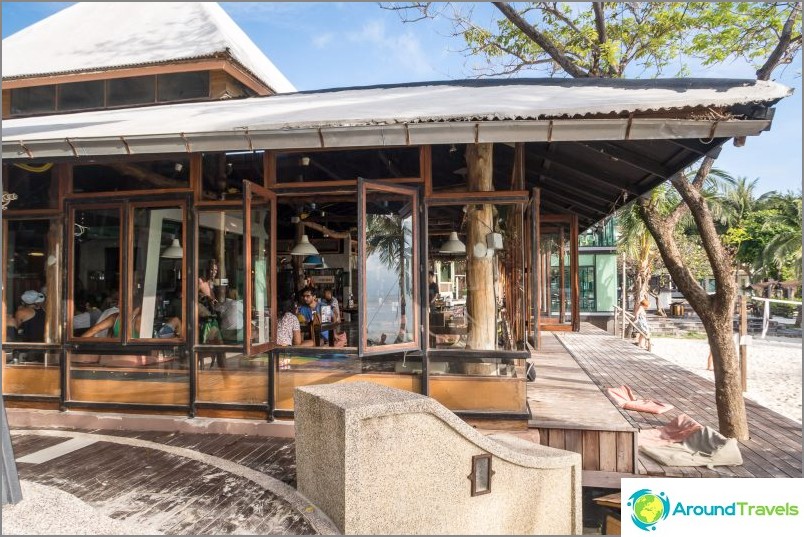 And there is even a full-fledged restaurant with billiards 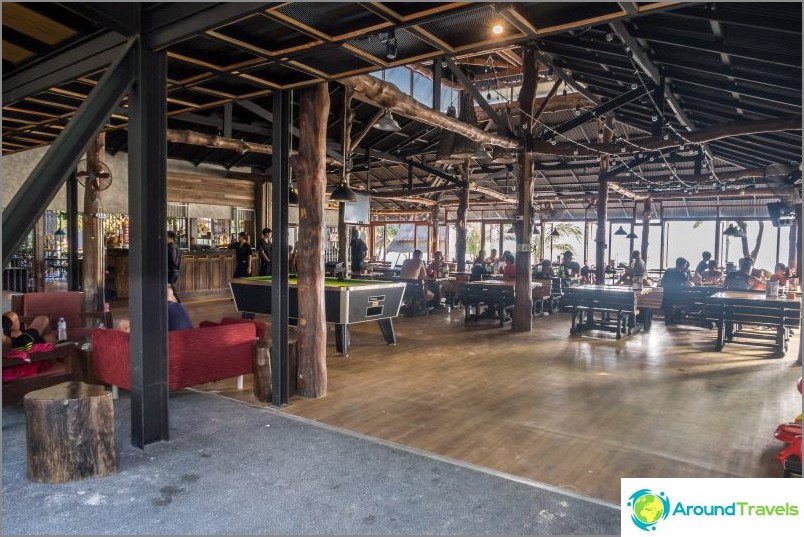 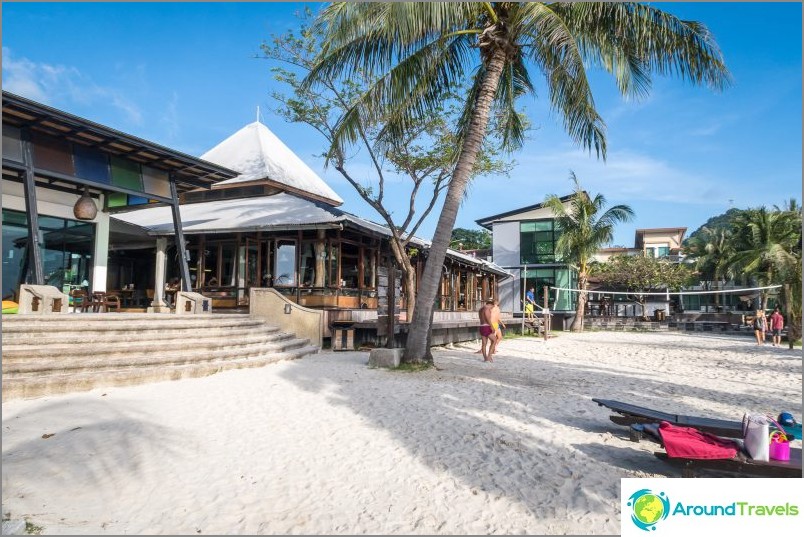 A place to play beach volleyball in Koh Phangan 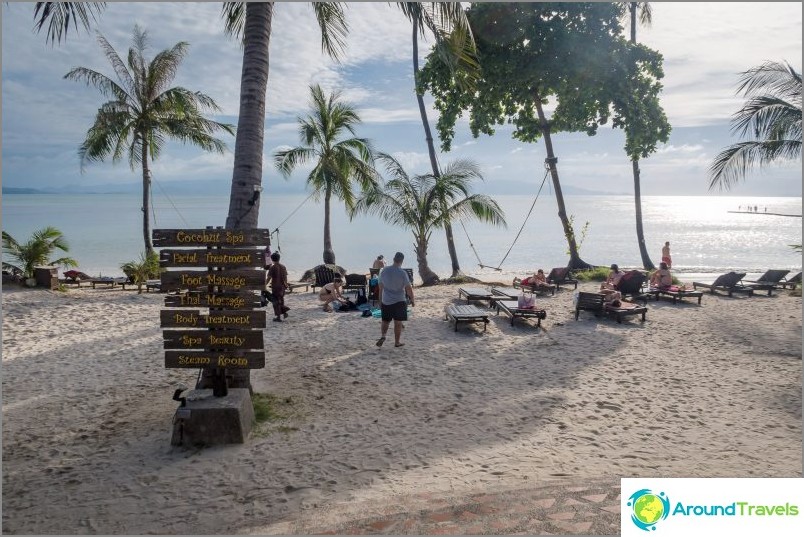 Everything is more or less cultured here 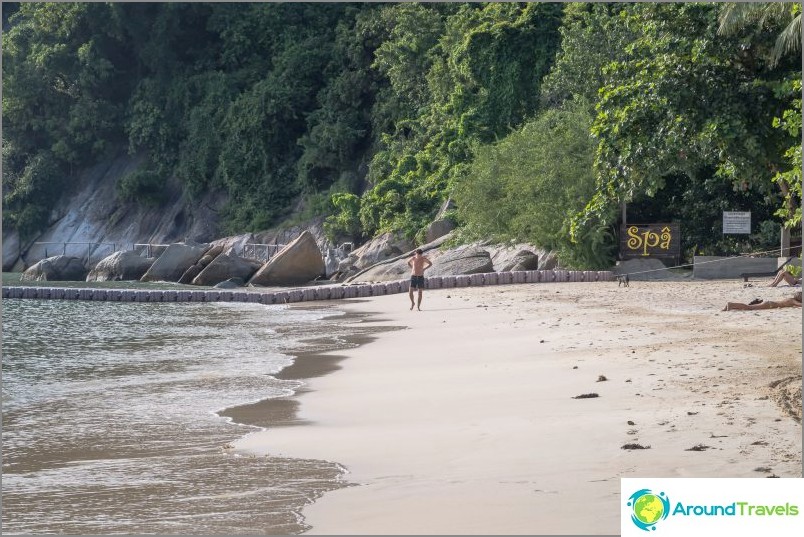 Right edge of Leela Beach, under a cliff with an Indian hotel 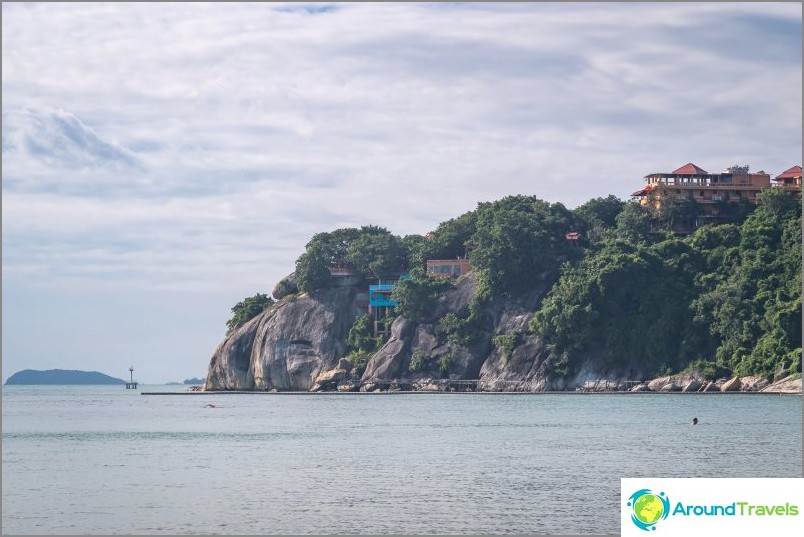 The far right edge of Leela Beach, on a cliff there is an Indian hotel with a beautiful sanctuary. 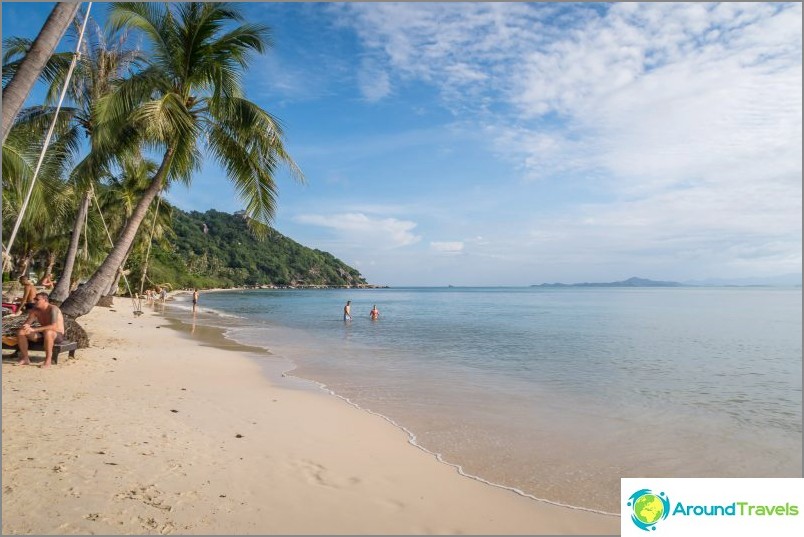 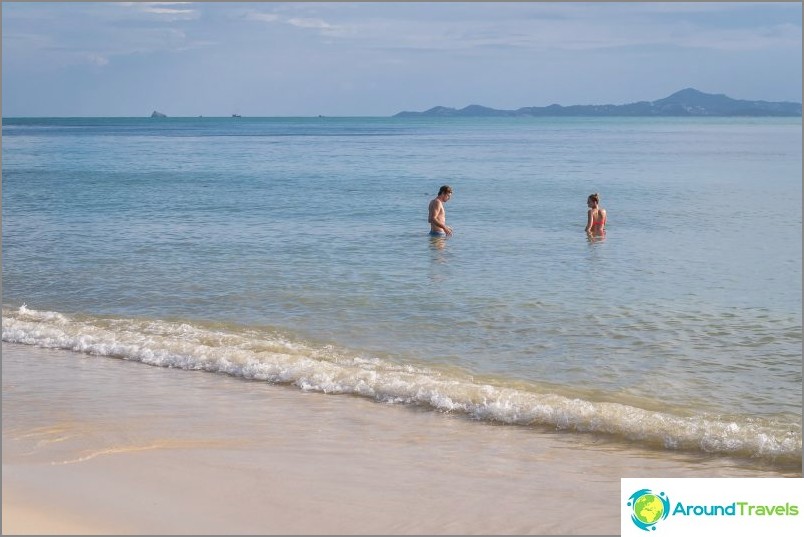 You can see the distance from the coast and the depth 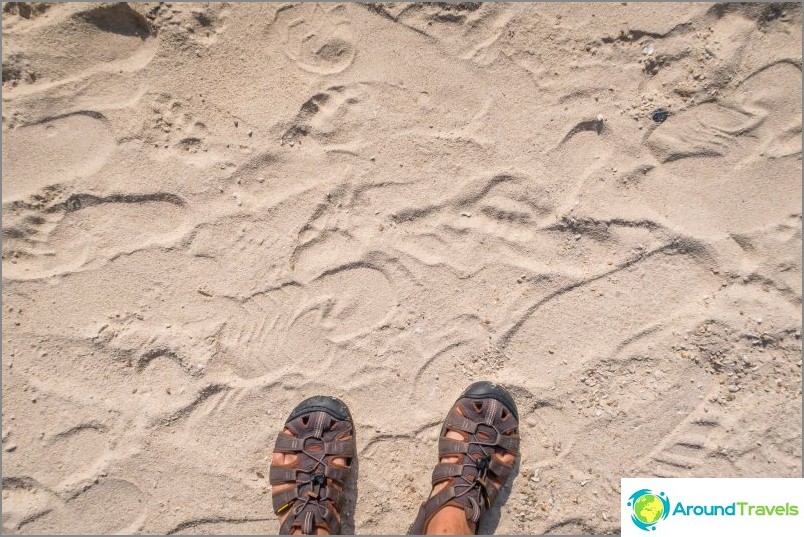 Left and center side near Leela Beach Resort 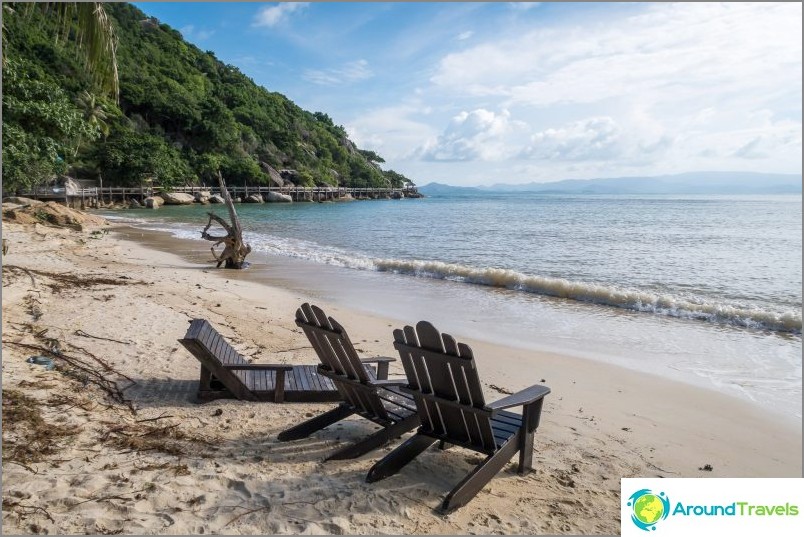 Left side of the beach, a wooden bridge leads to the Light House 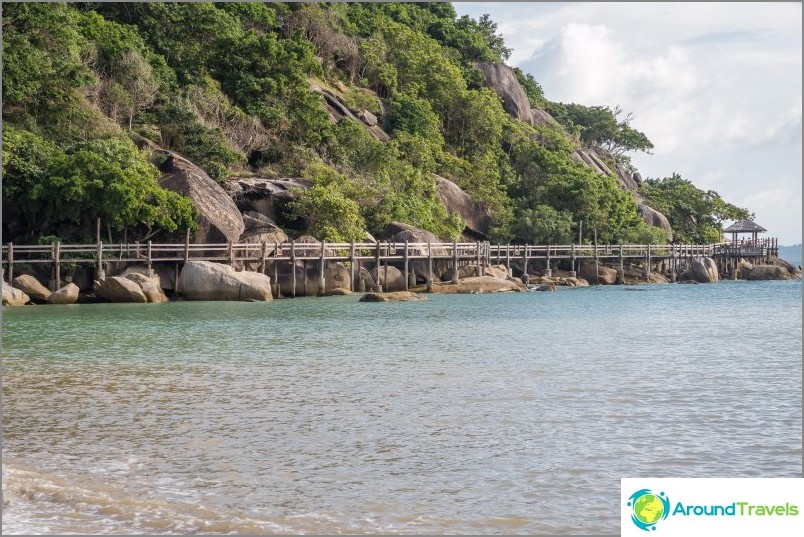 Cool thought up, along the way there are a couple of gazebos with benches 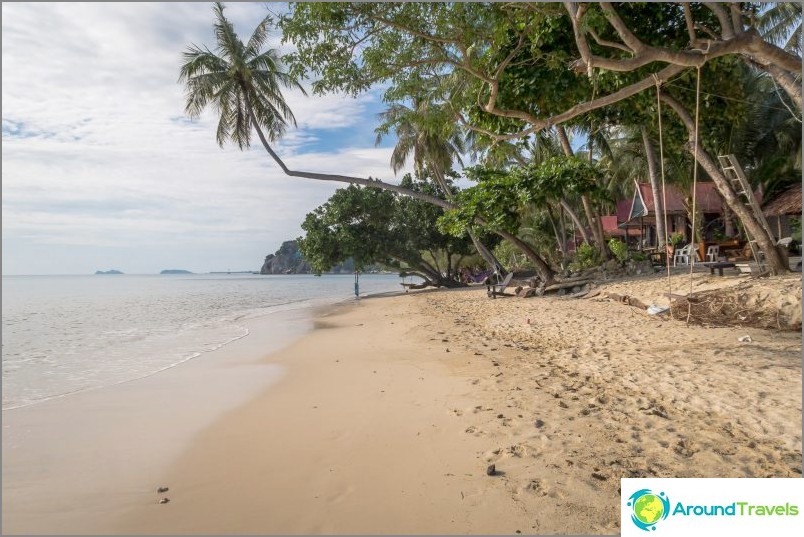 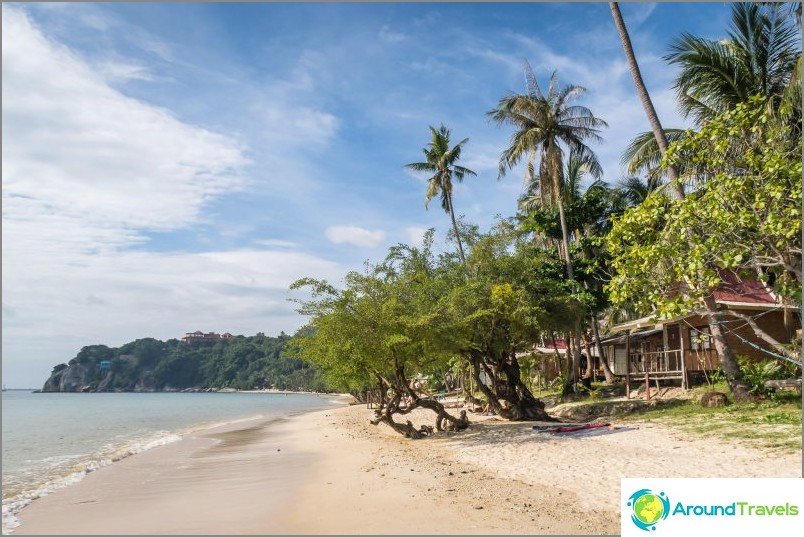 There are many snaggy trees, hammocks are hung on them. They are strong. 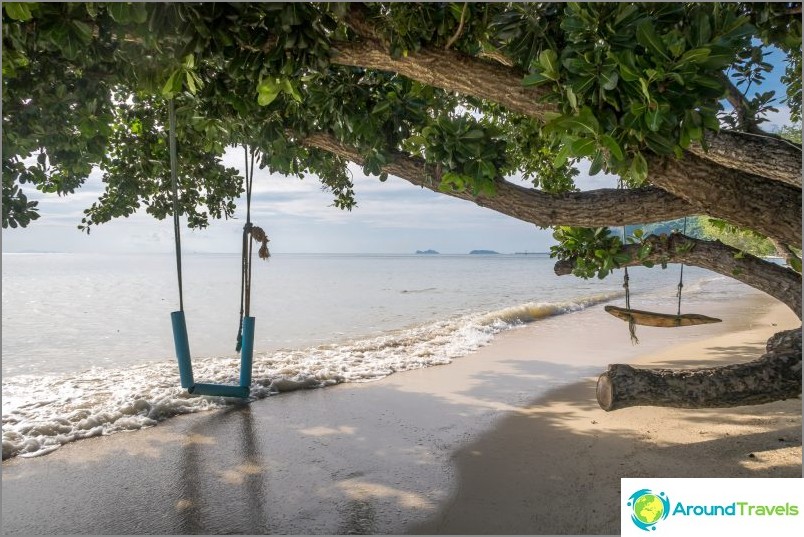 On the strongest you can find a swing 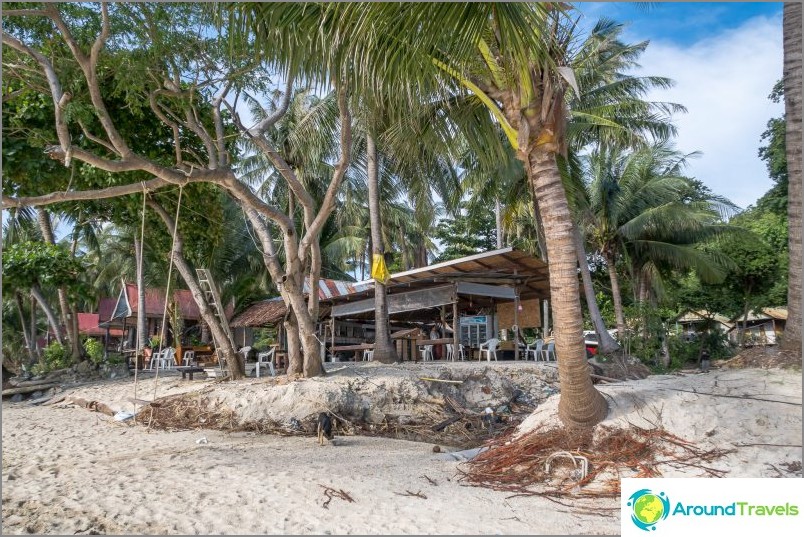 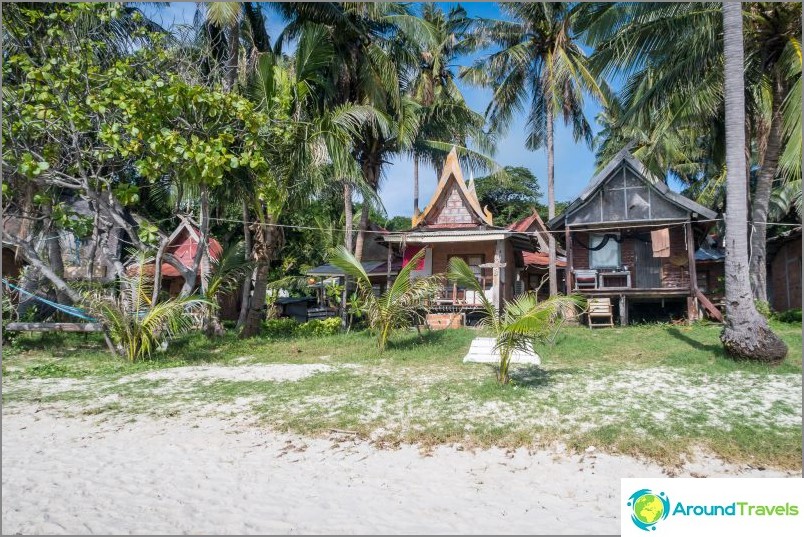 If you come closer, you can see cracks in the houses, they are made of just about anything 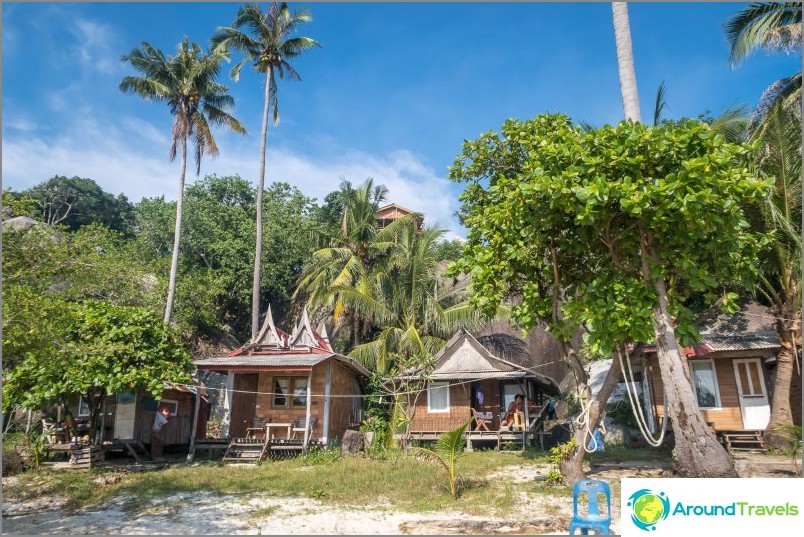 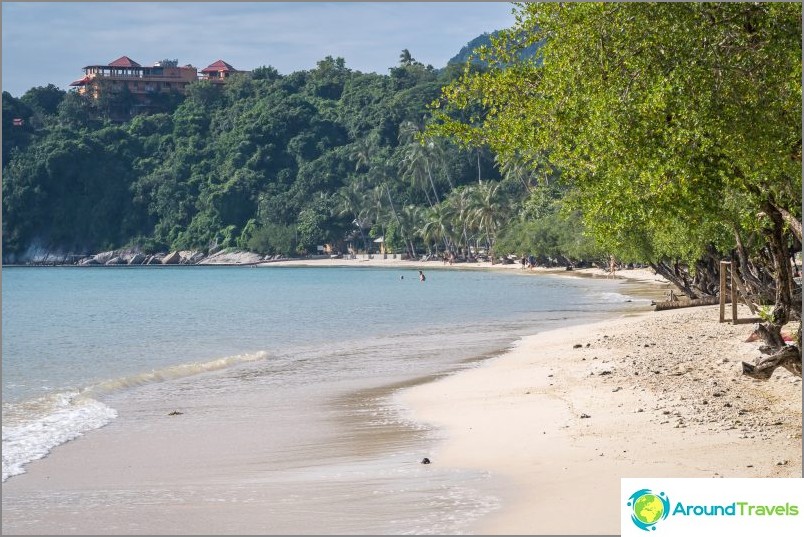 Almost got to Coco Hut Village 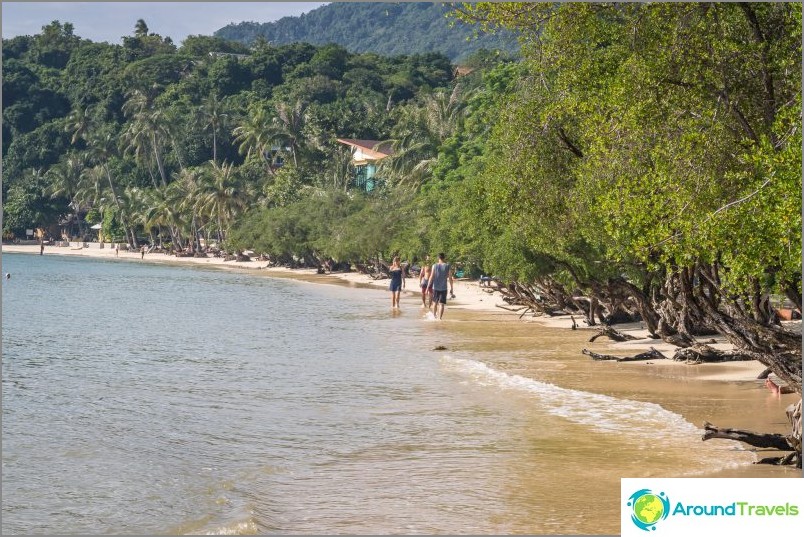 The tide. Pay attention - there is almost no beach in some places. 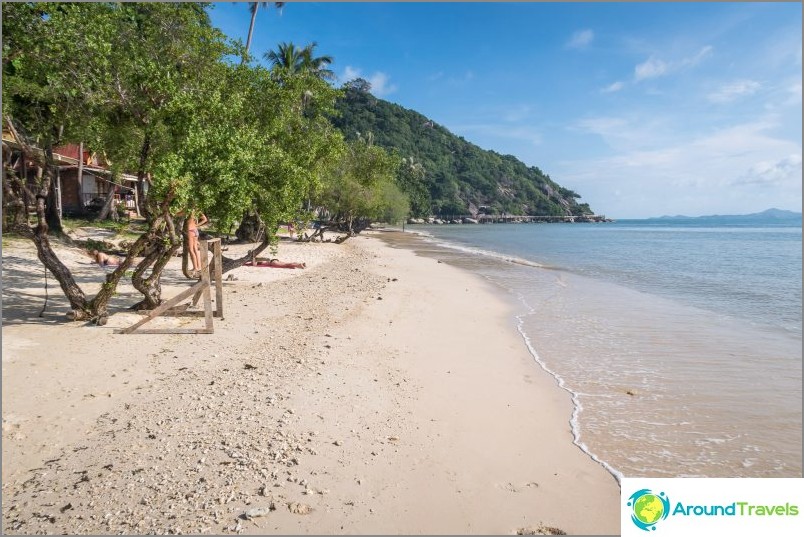 View from the center towards the Lighthouse 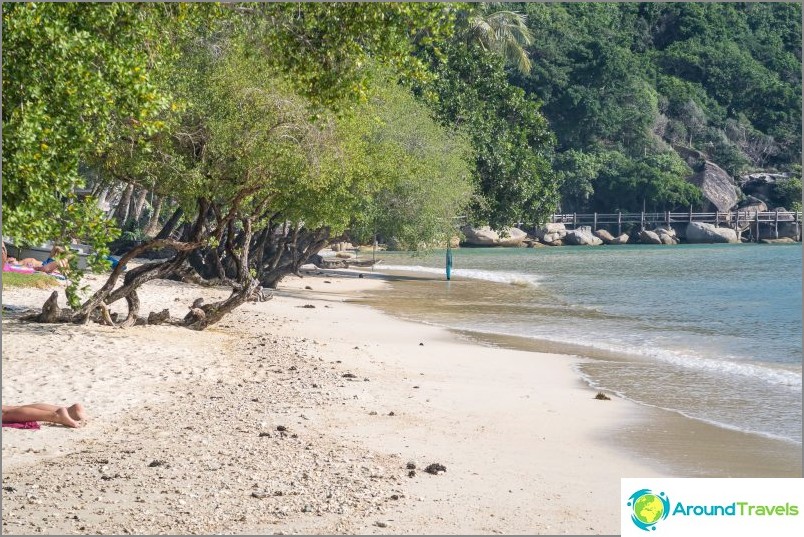 Here, in the approximation, the same area and someone's heels for scale

The infrastructure of Leela Beach is: a long row of residential wooden bungalows, a large vacant lot on which construction is quite noisy, there is also a CocoHut Beach Resort & Spa with a restaurant through which you can also get to the beach, and around the corner, behind the rocks on In the northern half of the beach, there is the Light House bar, by the way - a local attraction. For all other infrastructure, you will have to go towards Haad Rin.

There are no shops, even the smallest ones, on Leela Beach. At its core, the beach is a section of Phangan, cut off from the outside world, where people live in houses with finger-thick crevices, smoke, drink, do yoga, meditate, sleep in hammocks - in general, they do what any office worker wants to do..

Leela Beach is geographically located near the well-known Haad Rin, which is famous for its Full Moon Party. And in the Light House bar, which stands on Leela itself, parties with hard techno are charged once a week. The event is noisy, but due to its isolated location (behind the cliff), the noise from the party does not disturb the resting people on the beach.

In the place where I went to Leela Beach for the first time (the leftmost edge) in January 2017, a new resort was being built and there was a normal such, large-scale construction: tracked vehicles, a pile of construction waste, and part of the coast was covered with human debris, most likely as a consequence of the recent flooding. In general, on Leela Beach everything was rummaged and uncomfortably noisy.

The rest of Leela is nestled in the palm jungle, home to just a couple of resorts: CocoHut Beach Resort & Spa and Leela Beach Resort. The first of which is pretty decent, and the second is very basic and with a low rating, even outwardly they look ugly and done on the knee.

Also further away, to the left behind the stone cape, there is Lighthouse Bungalows & Restaurant, the same one where techno parties are held. So, I would recommend Leela Beach for those who want to relax in the silence and one hundred percent atmosphere of a wild island. Too wild for me.

Look for the houses of CocoHut Beach Resort & Spa on the map on the Internet or according to the signs on the road, you will come across it very first if you go from Haad Rin.

By the way, there is a normal good road to it. You will need to turn left into the resort. It makes no sense to go past the resort on dirt roads, only if you need to go to the Lighthouse. And so, through this resort, you can safely go down to the beach, and go to the right or left along the shore, finding a place for yourself in the shade of a tree.

The second option is to follow the signs to «Lighthouse», that is, to the leftmost (northern) end of the beach. There, near a nice wooden bridge leading along the rocks to the Lighthouse, there will be a small parking lot where you can drop your bike. True, the parking will be at the end of a rather steep descent, be careful. All the descents to the sea on Leela Beach are steep enough, keep in mind.

Of course, you can go down somewhere in the middle, where the road leads (there are several dirt roads) to Leela Beach Resort, but IMHO this is not an option, there is where to get confused, and the road was very bad (2017).