Pattaya Water Park or Pattaya Park is the only large water park within the city of Pattaya. There are newer and much more impressive Cartoon Network and Ramayana, but they are located far out of town and are quite expensive. Therefore, despite the fact that the Pattaya Park water park was built 20 years ago, or even more, and the view is quite simple and shabby in places, it still has several advantages.

In terms of area, it is not so small, but there are only six slides here. Moreover, they are duplicated. That is, there are only a couple of types of slides in the water park: straight and swirling. All of them are not extreme (at least for adults, especially those who have been to other, more modern water parks), and the spiral slides are not scary and slow at all. Even small children can ride here. True, on the slides, you can scratch your back at the joints, they are palpable. And this is not ice at all, of course. And descent on inflatable rings is not provided here in principle..

In the water park, in addition to a small pool with slides, there is another large, complex shape with the current. According to him «river» you can ride along the perimeter, sailing under the numerous bridges. This pool is quite deep. There is also a pool for kids, very shallow, with a cone-shaped slide in the middle, from which a fountain gushes..

The pools are lined with large parasols and gazebos with sun loungers. They are functional, but old and shabby. The tiles at the bottom in the pools are chipped off in some places, and casuarin needles fall into the pools from above.

In the far part of the park, there are simple cafes with Thai food and snacks, such as a canteen, where they give out coupons at the checkout after payment, which, coupled with many years of design, creates an easy impression of a journey to childhood.. 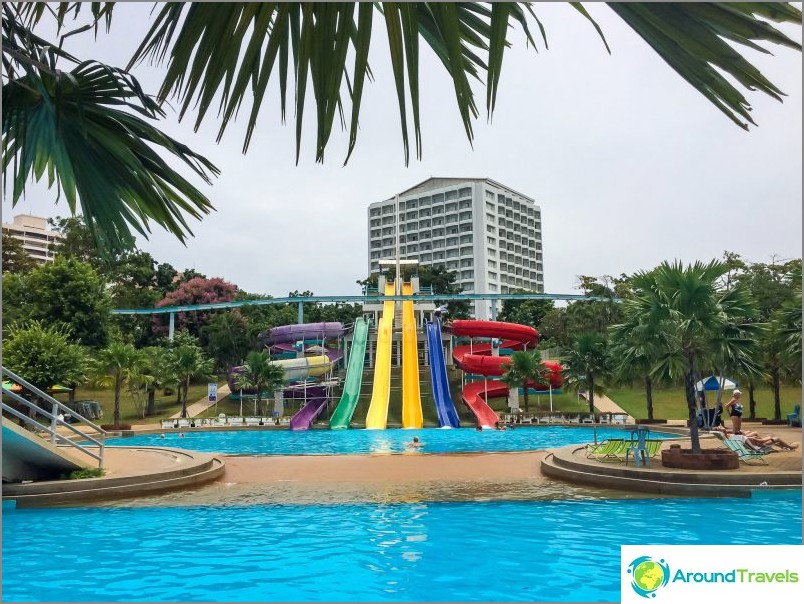 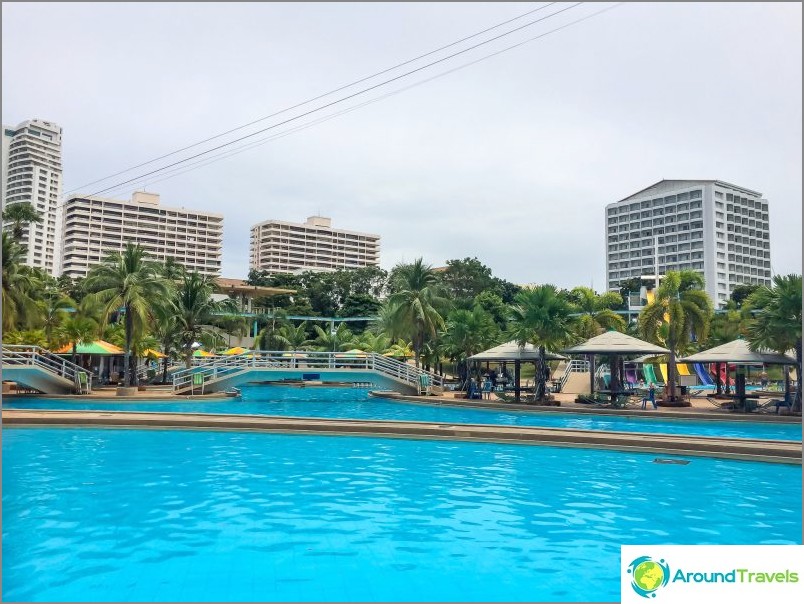 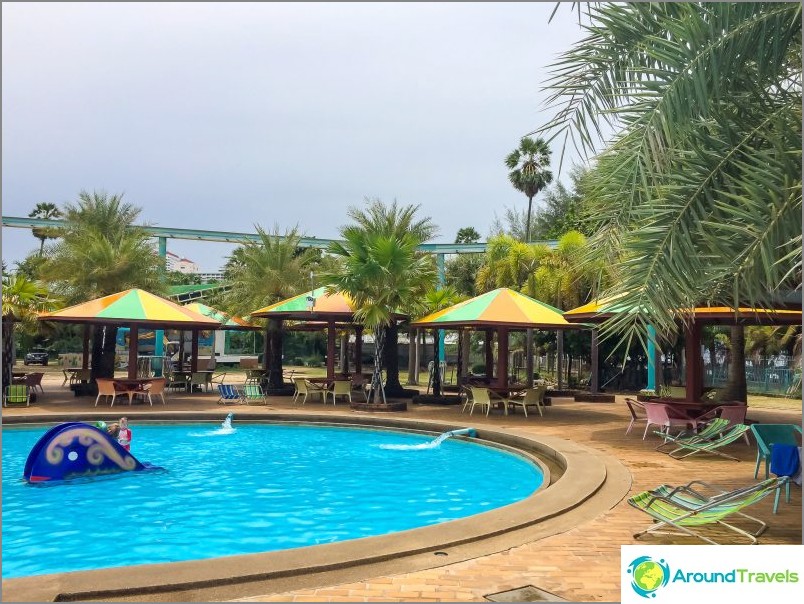 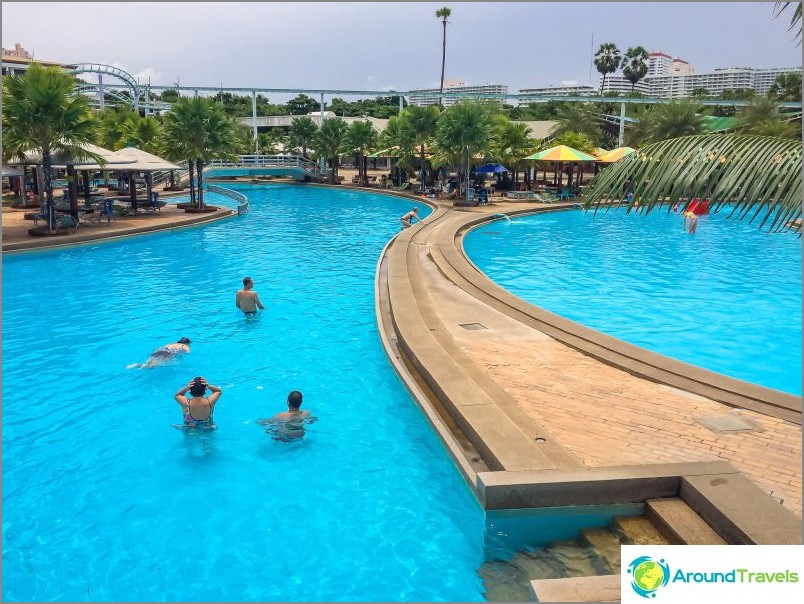 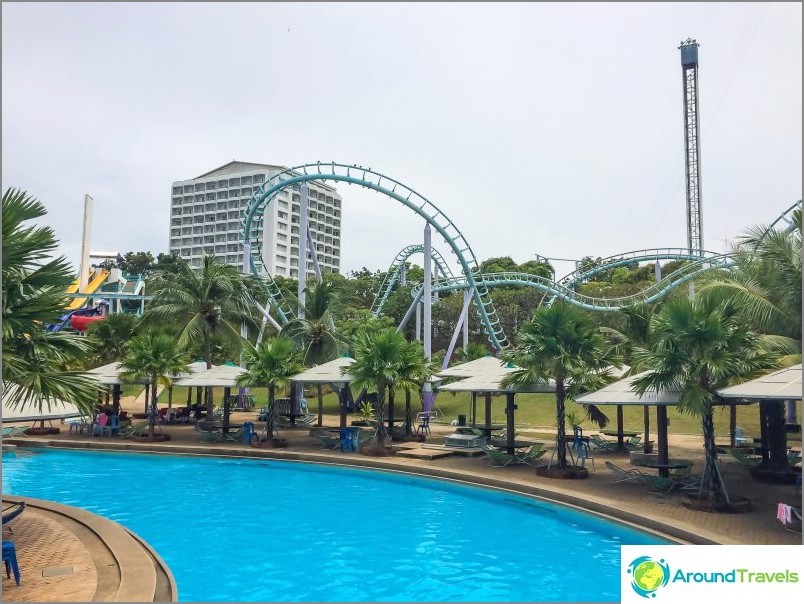 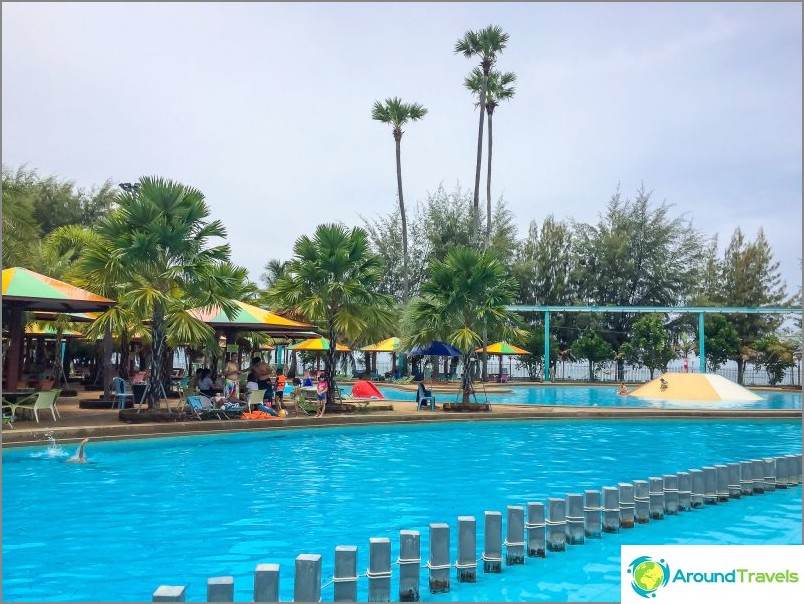 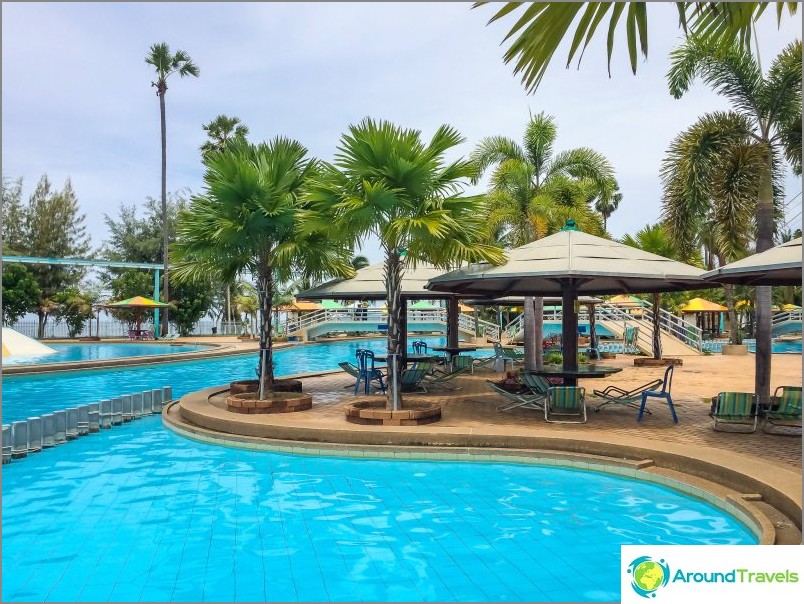 But in general, it is quite possible to spend a day in the park for your money. When there are no crowds of local tourists, the water park is quite nice and quiet. From its territory you can go to the beach and return during the day. In addition to sun loungers, there are also plastic sun loungers. Locals often have picnics here in gazebos and under umbrellas around the pool. The food in the dining room is hot dogs, etc., but there are also local simple dishes like kao pada (fried rice). It all costs a little more than on the street.

This place is not a must, but if you have already seen everything and want to spend a lazy day by the sea with children, then it will go for a change. But I would not say that I recommend, just the price is ridiculous.

On the territory of the hotel Pattaya Park Beach Resort and there are several other attractions next to the water park's pools, including a roller coaster monorail around the water park perimeter. But they all look rather old and shabby, and are not cheap (not included in the ticket price to the water park). Also, next to it rises high tower with an observation deck, from where you can go down the zip line. From the link above, my experience of descent 🙂

Entrance fee to the water park - 100 baht from adults and children over 80 cm.

The water park is part of a large complex at the Pattaya Park Beach Resort in Pratumnak. It can be approached from Pratumnak, Tapraya street 12 or from the sea, through Dongtan beach.

Pattaya Park Water Park
A small old water park next to the sea and the beach, on the territory of the hotel complex of the same name with the Pattaya Park tower. As a water park is weak, but the entrance ticket is cheap and there are not many people.

A small old water park next to the sea and the beach, on the territory of the hotel complex of the same name with the Pattaya Park tower. As a water park is weak, but the entrance ticket is cheap and there are not many people.