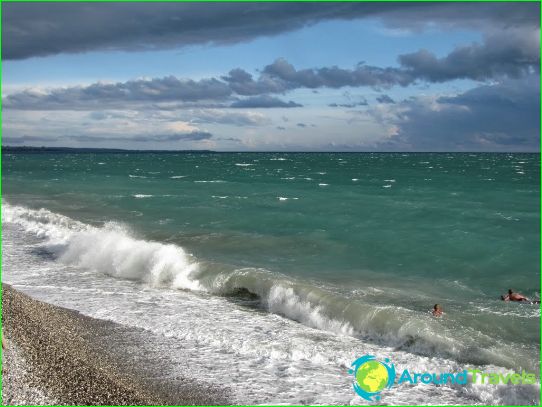 Rest in the Republic of Abkhazia will remind travelers of a respectable age about student holidays in their youth, when a trip to the Black Sea coast of the Caucasus was the height of dreams, and several weeks of carefree swimming flew by like one day. Today, a variety of tourists come here, who are attracted by the sea of ​​Abkhazia, its clean mountain air, ideal climate and reasonable prices for absolutely everything..
To the question of which sea washes Abkhazia, there is the only correct answer - the Black Sea. The republic is located on its northeastern coast on the southern slopes of the Greater Caucasus Mountains. The sea of ​​Abkhazia is more than 200 kilometers of comfortable and clean beaches covered with small pebbles, stretching between the borders of Georgia and Russia.

On the Abkhaz beaches, sunny weather reigns most of the swimming season. The water temperature in the Black Sea in July-August rises here to +27 degrees. The season ends only in October, when thermometers record that the water has cooled to +18, although some fans «post-velvet season» it doesn't stop.
The nature of Abkhazia and its Black Sea coast makes people who are far from versification into real poets. The majestic ridge of the Greater Caucasus Range and coniferous forests, the purest water and flowering gardens in Gagra, mountain lakes and waterfalls - all this becomes a weighty reason to come to rest in Abkhazia.

What are the seas in Abkhazia?

It would seem that the answer to this question is obvious - the Black Sea. But romantics and gourmets can name at least a few more: a sea of ​​hospitality of local residents, a sea of ​​the best Caucasian wines, a sea of ​​amazing sunsets and just - positive, warmth and great mood.

Abkhazia is the country of the soul

Photos of the coast of Abkhazia

Airport in Athens: scheme, photo. How to ...