Articles about Afghanistan
by Alexis 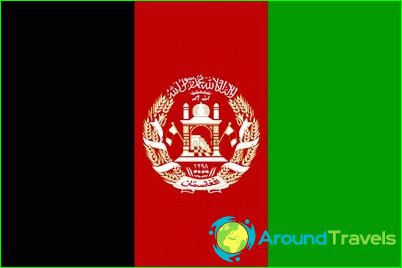 The current flag of the Islamic Republic of Afghanistan was approved as a state symbol in January 2004. The country is a kind of world record holder: over the past 130 years, it has changed the appearance of its flag 23 times..

Description and proportions of the flag of Afghanistan

The rectangular flag of Afghanistan has proportions that are somewhat atypical for other states. The width of the panel corresponds to its length as 7:10. The flag is divided into three equal vertical stripes. The one closest to the shaft is black, followed by dark red, and the outermost dark green. In the central part of the red stripe, at an equal distance from the edges, the coat of arms of Afghanistan is applied to the cloth. The coat of arms is black for flags used by government agencies. In other cases, the coat of arms may be white or yellow..

History of the flag of Afghanistan

The colors of the flag of Afghanistan are in many ways typical of Muslim states. The black stripe symbolizes the colors of religious banners from the distant history of the country. Red means the supreme power of the king, and green - the hope of success in business.
In the middle of the 18th century, the Durrani Empire, located in the territory of modern Afghanistan, used a green flag as a banner with a white horizontal stripe in the middle. Then, in 1880, the emir Abdur-Rahman, who came to power, introduced a black cloth, to which the son of the emir Khabibullah subsequently added a white emblem. She served as the ancestor of the modern coat of arms of Afghanistan. Having become a kingdom in 1926, Afghanistan received divergent rays as an addition to the existing flag emblem..
In 1928, the kingdom introduced the tricolor for the first time. Ammanula Khan, who visited Europe, came up with a new symbol, where three stripes represented the unity of the glorious past, the struggle for sovereignty and hopes for a happy future and prosperity of the state. The new emblem on his flag included the sun rising over the peaks of the Afghan mountains..
Half a century later, the country, having changed the official flag several times, entered the period of communist rule and received a red banner with a yellow seal at the top of its shaft. Then there were the Taliban with a white flag and shahada on it, the horizontal green-white-black tricolor of the Northern Alliance, until, finally, in 2004, the Islamic Republic of Afghanistan approved the current version as one of the state symbols.

Photos of the flag of Afghanistan