Articles about Yerevan
by Alexis 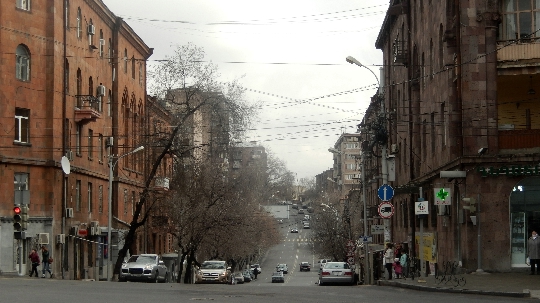 Yerevan is considered one of the oldest cities in the world. It is the capital of Armenia, which is located in the central part of the Ararat Valley. Earlier the city was called Erebuni. Today the city is the largest center in the Caucasus. Yerevan is decorated with a large number of attractions, among which various monuments and monuments stand out.

The picturesque Republic Square is considered the main metropolitan area. The main objects on the Republic Square: the Ministry of Foreign Affairs of Armenia, the Central Post Office, the History Museum, the hotel «Armenia».

The central part of the city is lined with streets with bank branches and popular shops. Crowds fill the center during national holidays. Among the main streets, Abamyan and Mesrop Mashtots streets deserve attention. Along these streets are the city's main offices.

Highways and central streets are located in a radial ring pattern. Therefore, in Yerevan it is very easy to navigate the terrain. The main part of the city is distinguished by a single architectural concept. The buildings are designed in the neoclassical and constructivist styles. The city center forms a ring of Saryan, Karmir Banaki, Khanjyan and Moskovyan streets. The main highways pass through the ring: Abovyan, Teryan, Tumanyan, Sayat-Nova streets. A beautiful boulevard stretches along Moskovyan and Khanjyan streets.

The area of ​​the city inside the ring is approximately 3.8 square kilometers. The sights of the capital are concentrated here. Many streets of Yerevan are short and beautifully decorated. The houses on them are made of natural tuff stone. Courtyards are distinguished by the presence of arches.

The street is named after Khachatur Abovyan, a 19th century thinker. Previously it was called Serf and Astafyevskaya. The street runs from the Museum complex to the square with the monument to Abovyan. The neighborhoods here look very original: 19th century houses are adjacent to modern buildings that house entertainment centers. This beautiful street has many famous restaurants and cafes. The most interesting and ancient building of the city is located at the intersection of Abrahamyan and Pushkin streets.

This is the main highway of Yerevan, which starts near the Haghtanak bridge. At the very beginning of the street you can see the church of Surb Sargis, built of pink tuff. Further there is the Covered Market and the Blue Mosque - the only functioning mosque in Armenia. On Mashtots Avenue there are entertainment venues, restaurants, a theater, the Center for Conceptual Art, the Opera building and other objects..