Home › Articles about Armenia › Flag of Armenia: photo, history, meaning of colors of the national flag of Armenia 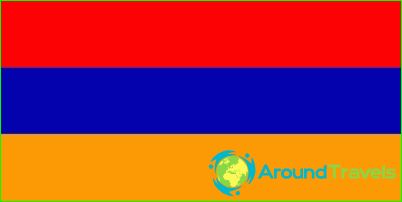 As you know, the flag of Armenia is based on the Armenian flag, which was founded at the beginning of the twentieth century. In external form, it looks like a rectangle, and its width measures twice the length. The web consists of equal stripes located horizontally.
In particular, in the ninetieth year, an official law on the state flag was adopted. At the same time, the coat of arms of this country was approved, and when it was approved, the historical coat of arms was used (the artist Kojoyan and the architect Tamanyan worked on its creation). The coat of arms consists of a shield divided into four sections and five additional elements.
Each section is a symbol of the independent Armenian kingdom (there were four of them in history). Directly behind the shield are the Lion and the Eagle, and they are considered real kings of animals, symbolizing signs of wisdom, patience, and nobility. For several centuries, they were still considered symbols of the royal family..
Five elements are located at the bottom of the shield. The chain that is broken is a symbol of freedom, as well as independence, the sword symbolizes national strength and power, ears of wheat - Armenian diligence, and the wheat handle can denote the culture and intellect of the Armenian heritage.
In Armenian, the state flag is also called Yeragu'in. The upper stripe on the panel is colored red, the middle stripe is colored blue, and the bottom one is orange. As for the ratio of width to length, they are one to two. In 2006, the Armenian government passed a new law telling about the flag.
There are many interpretations of the designations of such colors. Most of all, the red color is used, which is a symbol of the blood shed by Armenian soldiers. The blue color represents the Armenian sky and the orange color represents the fertile cultivated land.
The constitutional order of the Armenian state presupposes the approval of slightly different color meanings. For example, the red color denotes the highlands in Armenia, the incessant struggle of Armenians for existence, Christianity, the independence of the state. The blue color is associated with the desire of Armenians to live without war. Finally, the orange color is a symbol of creative talent as well as Armenian hard work..

Photos of the flag of Armenia