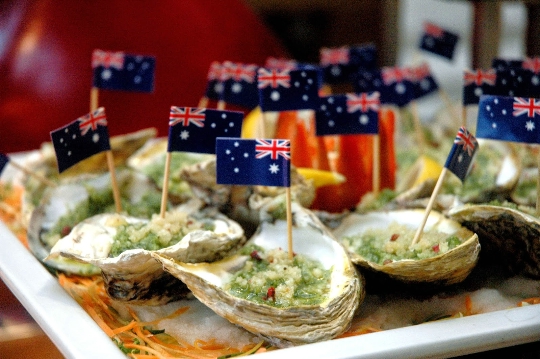 A truly Australian dish is vegemite, presented as a special yeast extract with celery, spices and onions. It can be eaten as a stand-alone dish or spread on bread..

In Australia, travelers will be able to taste unusual dishes in the form of kangaroo, emu or crocodile meat, shark lips, blue crabs. Famous national dishes are barracuda and trout baked over charcoal. If we talk about the signature dishes of certain regions, then oysters are widespread in Sydney, salmon in Tasmania, and scallops in Coffin Bay. As for meat and fish dishes, they are often served with chutney - a spicy seasoning with apples, ginger, wine vinegar and cloves..

Often, dishes are also prepared from fruits (bananas, inyam, pineapples), which in Australia are stewed, boiled, fried and form the basis of cocktails.

In Australian restaurants you will find French, Italian, Asian, Mexican and national dishes in the form of meat pie and trout baked on coals (in authentic restaurants you will be offered to taste Australian wines “Cascade”, “Semillon”, “Victoria Bitter”). In addition to restaurants in the country, you can have a bite to eat in bistros, stylish cafes and pubs for all tastes, and in wine-growing regions you can enjoy a variety of dishes in restaurants located on the wineries themselves..

In Sydney, you can look into “Wolfie’s Grill” (the restaurant is focused on the preparation of Australian dishes prepared from seafood and beef), in Melbourne - in “Jacques reymond” (here visitors order modern Australian cuisine and various wines from the wine catalog), in Canberra - in “Juniperberry” (guests of this restaurant are given the opportunity to enjoy dishes from game, beef, seafood and kangaroo).