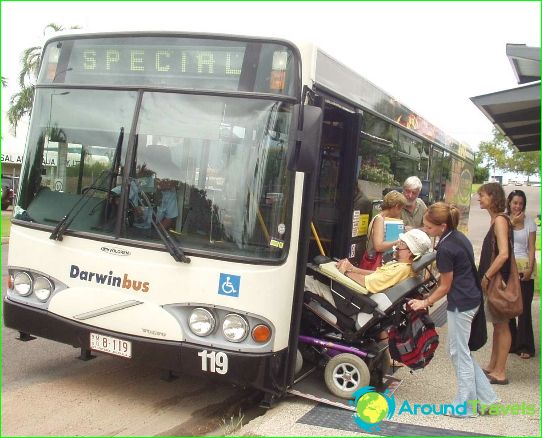 The main modes of transport in Australia are:

- Public transport: this includes buses, trams (Adelaide, Melbourne), high-speed trams (Sydney, Melbourne - there is also a monorail).
City buses run from 05:00 to 23:00, and to pay for travel, you need to purchase special cards. But you can save a lot by purchasing a single pass valid for 7 days.
Using the services of buses, you will be able not only to travel short distances, but also to go on a tour of the country (buses have air conditioning, toilet, video equipment).
And, for example, in Sydney you will be offered to go on a trip on a special bus route designed for tourists - red buses deliver everyone to the sights of the city. By purchasing the Sydney Explorer Bus, you can enter and exit at any stop, continuing your journey at any time.
- Air transport: thanks to the extensive network of domestic air traffic, travelers are offered an excellent opportunity to visit even the most remote corners of the country and resort islands, traveling by plane. Domestic flights are operated by Virgin Blue and Qantas Airways (they operate regular flights to almost all Australian cities).
It is worth noting that for groups of 10 people or more, group discounts on air tickets are provided (on request).

- Water transport: for tourist purposes, you can move along the rivers on private boats.
It is worth noting that ferries operate in Brisbane, Melbourne, Sydney, Perth, Newcastle.

- Rail transport: By rail you can reach major cities. In addition to getting you to your desired destination, while traveling in this way you will be able to admire the picturesque views. But the cost of train tickets is quite high.

When traveling by taxi, it is worth considering that night fares are 20% more expensive than day fares, and waiting, baggage transportation, and calling a taxi by phone require an additional small fee (in some taxis, you can pay for travel by credit card).

Anyone who has reached 21 years of age (sometimes 25 years old) and who has an IDL and a credit card to confirm their solvency has the right to rent a car (driving experience - at least 2 years).
You should be aware that there is left-hand traffic in the country, and when planning a long trip, it is advisable to stock up on drinking water, provisions and fuel, since shops and gas stations are often located at a fairly large distance from each other..
It is worth considering another important point - in order to ride on toll highways in Australia, you need to become a participant in a special program (participating cars are equipped with a special electronic device - it takes into account travel on highways). As for those who do not pay for toll roads, they will inevitably be photographed by a camera, after which the offender will be fined.
When driving along deserted roads, you need to be especially careful, as large animals often come out on the roads..
Traveling in Australia will not give you any hassle, as the country has modern, well-maintained roads..