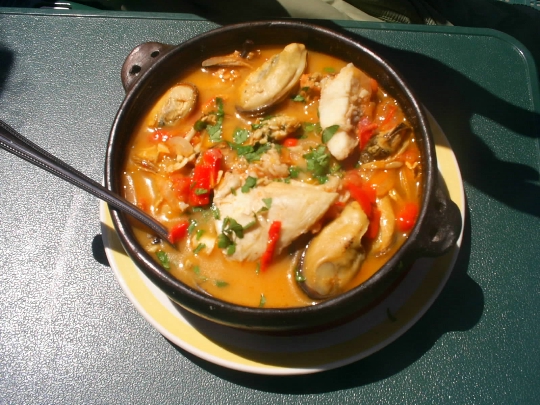 Chilean cuisine is not only a combination of indigenous recipes: it was also influenced by the culinary traditions of Croatia, Spain, France, and some Middle Eastern countries..

The signature dishes in southern Chile, especially in Patagonia, are centolla (crab dish) and Corderoal Palo (fried lamb), on Easter Island and Chiloe - curanto (fish, meat, chicken, vegetables and sweet potatoes wrapped in banana leaves). And, for example, in the area of ​​the city of Temuco, travelers will be able to taste the cuisine of the Mapuche people, the dishes of which are prepared from soft orange mushrooms and pine nuts the size of a pine nut..

While resting in Santiago, tourists can enjoy seafood treats, which are called here “mariskos”, including such an exotic dish as sea urchin soup. National cuisine in Santiago can be tasted at the restaurant “La Casa Vieja” (try some Chilean dishes here like crab pie, pork loaf, corn pie) or “Dona tina” (the restaurant has a homely atmosphere, large portions are served, and on weekends guests are delighted with live music).

The menu of Valparaiso restaurants is mainly dominated by fish and meat dishes, therefore, while resting here, it is worth satisfying your hunger with Chilean dishes in the restaurant “Cerro concepcion” (average bill - $ 25-45).

If you want to learn how to cook Chilean dishes, in particular from seafood, you will be invited to a culinary master class at El Galion Mercado Central restaurant.

You can come to Chile in April, when the Nam Culinary Festival is held in Santiago (eminent chefs will give master classes, restaurants will delight you with festive dinners, and if you wish, you can get natural local products at the Nam Mercado market).