Prague in 2 days: where to go in Prague

Articles about Prague
by Alexis 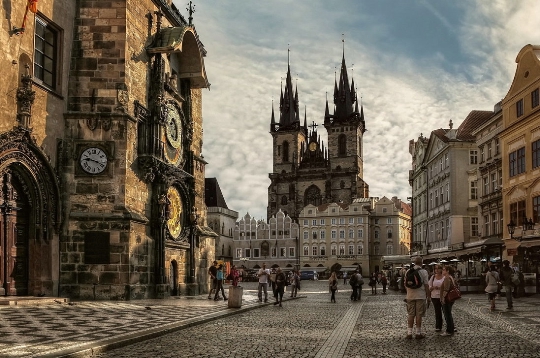 According to some travelers, the Czech capital is the most beautiful city not only in the Old World, but also in both hemispheres. Its ancient pavements, temples and bridges that hobbled the Vltava are real masterpieces that you can wander along endlessly. If circumstances do not allow you to take such a long vacation, seeing Prague in 2 days is also a very real task..

The best way to start your acquaintance with Prague is from its historical heart - the Old Town, the architectural dominant of which is the City Hall. The building is located on the famous Old Town Square, which was famous for its huge market 900 years ago. The square is located at a crossroads and many hundreds of carts with merchants passed through it every day..
The Town Hall was built on the Old Town Square in the 14th century, and a century later the chimes appeared on its tower. Their dial contains the image of the Sun and the Earth, the signs of the zodiac, the clock is able to show not only the current time, but the day and month, the time of sunset and its appearance on the horizon. Every hour the chimes put on a real performance and show onlookers scenes from medieval life.
The building of the Tyn Basilica is no less magnificent on the old square. The temple is dedicated to the Virgin Mary and was built in the XIV century on the ruins of a Romanesque church. One of the towers of the cathedral is noticeably wider than the other, which is a consequence of the mistake of medieval builders.

In the land of the gnomes

This is how a traveler feels when he is in Prague for 2 days and finds himself on the Zlata street. The dwarf houses on it are built into the fortress wall that once defended the city, and, despite their doll size, were quite residential. Chasers used to work here, and the street was called Jewelry. Then the area became a haven for poor artisans who were unable to afford spacious housing..
According to an old Prague legend, alchemists once lived on Golden Lane, seeking to find a recipe for making gold. True or not - now no one can say with certainty, but the fact that Franz Kafka worked in one of the houses at the beginning of the twentieth century is a reliable and well-known fact. After 6 pm, the entrance to Zlata Street becomes free, but by this time all its famous souvenir shops are no longer open.

Even houses are dancing here

As part of the Prague excursion in 2 days, guests will certainly want to be photographed against the background of the "Dancing House", built at the end of the twentieth century in honor of a couple of famous dancers. "Ginger and Fred", as the Prague people jokingly call this unusual building - the location of a cozy restaurant on the roof, where you can taste the masterpieces of Czech cuisine.