Airport in Copenhagen: scheme, photo. How to get to Copenhagen airport 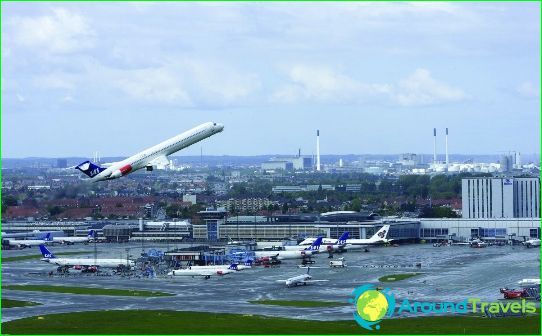 Kastrup is one of the largest international airports in Scandinavia. The airport, which is located about 10 km from Copenhagen, was built in 1925 in the municipality of Thornby. The airport in Copenhagen is considered the main airport for the large Scandinavian airline SAS. In general, the airport serves more than 60 airlines and has flights to more than 110 destinations.

As noted above, the airport was built in 1925. The castle was originally the main building. Later, in 1939, it was decided to erect a new building, which was designed by the architect Wilhelm Lauritzen. They decided to keep the castle, but it was moved about 4 km to the west in order to free the eastern part of the airport for the possibility of expansion.
Later Kastrup Airport was renamed Copenhagen Airport.

Copenhagen Airport has 3 terminals. Terminal 1 was built in 1969 and is currently responsible for domestic flights.
Terminals 2 and 3 were built in 1964 and 1998. respectively. Both terminals are exclusively responsible for international flights.
It should be added that there is a railway station in Terminal 3, from which you can get to Copenhagen and other cities of Denmark and Sweden, and there is also a metro line here..
You can get from one terminal to another by a transfer, which will take the passenger to the desired terminal free of charge in 5 minutes.

Copenhagen Airport offers a number of useful services - cafes and restaurants, bank branches and ATMs, currency exchange, etc. Cozy waiting rooms will allow you to spend time comfortably while waiting for your flight.
We should also note the presentation of information - a variety of booklets, information boards and friendly staff, most of whom speak English..
The negative aspects include the lack of free internet and inflated prices in stores..

There are several ways to get from the airport to Copenhagen: